Hello everyone! I hope this post finds you well. I woke up early this morning for a Saturday and couldn’t go back to sleep. I had taking photos for a Six On Saturday post on my mind so I got out of bed at 9. I got up, made coffee, fed the cats, and checked to see what the temperature was. 23°F. The sun is shining bright today and it looked GREAT! I went outside to take photos and it sure didn’t feel like 23°. By noon the National Weather Service says it was 35° and AccuWeather says 31. I always check several sites to see which one I like the best.

Yesterday I went to a friend’s house to put a new battery in her smoke detector upstairs and noticed the Quince in her yard has started to leaf out. That triggered a Six On Saturday post right then. So, this morning I went right to the Quince in my yard to see what it was doing. Unfortunately, it hadn’t leafed out near as much as the one in Connie’s yard and all the close-up photos were not presentable. There are several species of Quince that might grow here and I have not figured this one out yet. It is a very old bush, likely planted by my grandparents in the 1960’s. Many older homes in town have Quince bushes in their yards.

I also noticed one of the Lilac bushes was really getting with it. 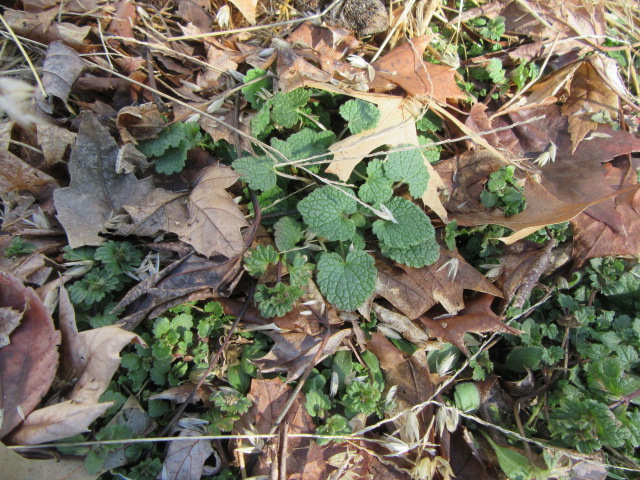 I am not sure which of the two species this photo is of since they are both everywhere and growing together (for the most part). Their early leaves look so much alike you really can’t tell them apart. Truthfully, the Lamium started growing quite a while back so I am not sure if this counts as a sign of spring…

Of course, I had to look under the pot covering the Phlomis ‘Edward Bowles’. Hmmm… It didn’t even turn brown this winter. I covered it a while back because of paranoia. I am going to say it again… “I HOPE IT FLOWERS THIS YEAR.”

Achillea millefolium by the chicken house on 2-8-20.

Of course, the Achillea millefolium are growing new leaves. Only very cold temps make them completely disappear and as soon as they get a chance they send up new leaves to see if the coast is clear. 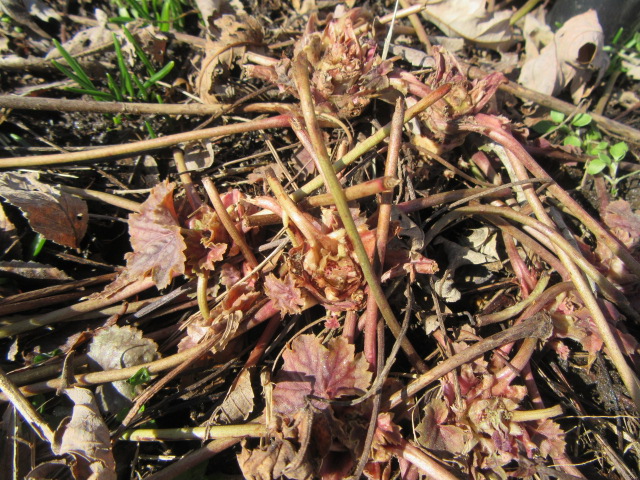 Well, what can I say? I got excited when I saw the Heuchera growing new leaves. They had been covered with snow off and on so I hadn’t checked them earlier. Heuchera are another perennial that will start growing earlier than you might expect during a mild winter. I had to take photos of all of the Heuchera which would completely screw up Six On Saturday. So, I numbered them 5.1-5.4. I hope you don’t mind. 🙂 It’s just when the snow melts to reveal signs of life I get somewhat trigger happy with the camera.

The above photo is the Heuchera ‘Venus’. Its new leaves have a completely different color than when they mature to a silvery-green with darker green veins.

The Heuchera ‘Obsidian’ reportedly has the darkest leaves of the Heuchera cultivars but that depends a lot on the light. Oh, the Chickweed is also growing, which is definitely a sign of spring… 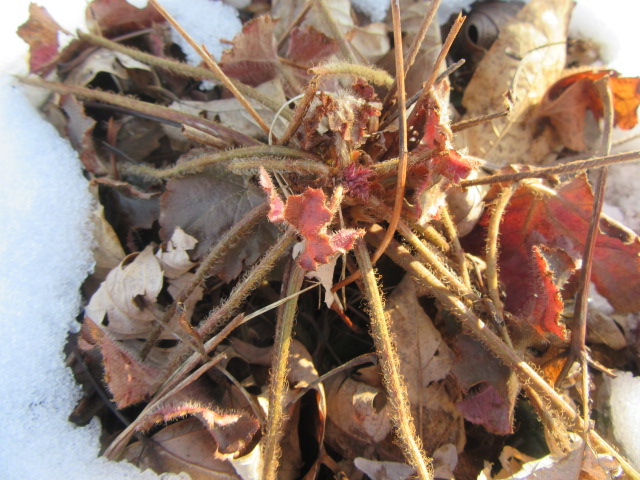 The Heuchera ‘Palace Purple’ is ready for spring. Its leaves are nearly as dark as ‘Obsidian’ during the summer and the plant and leaves get much larger. 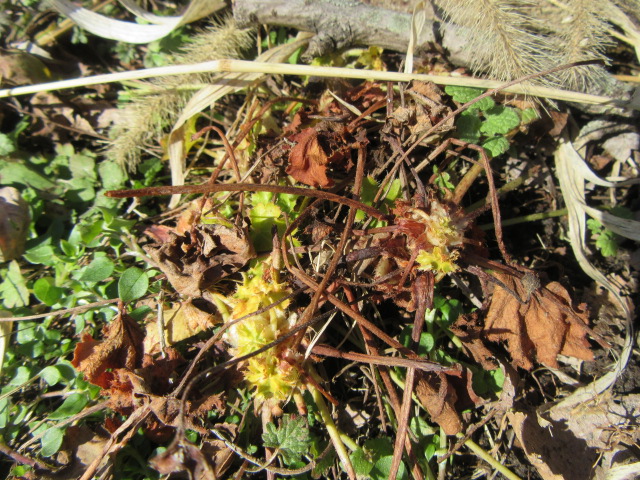 I really like the chartreuse leaves of the Heuchera ‘Like Rickey’ and it is very good to see it growing new leaves. It is such a great plant to brighten up a shady bed. 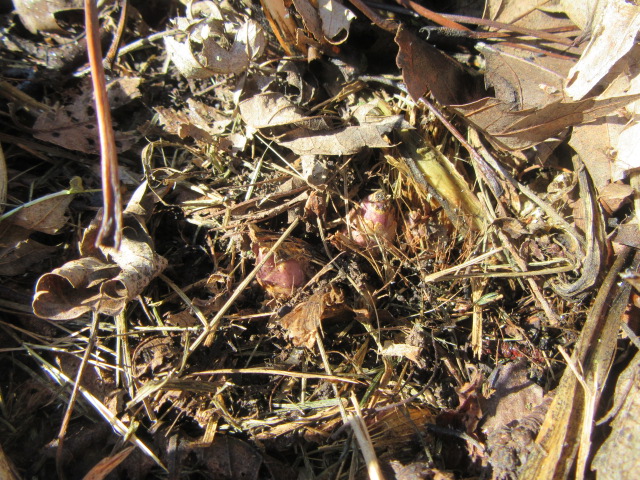 While I was photographing the Heuchera I looked under the leaves to see what the Hosta were doing. While I expected to see nothing, I was pleasantly surprised. I first checked the Hosta ‘Abiqua Drinking Gourd’ and saw a sprout but I didn’t take a photo. Then I checked Hosta ‘Potomac Pride’ and had to take a photo. I didn’t check the rest because I knew that would lead to more photos and this Six On Saturday post would be all out of whack. Seeing the Hosta sprouting so early is definitely weird…

Kalanchoe daigremontiana (Mother of Thousands) on 2-8-20.

Hmmm… Let me explain myself. First, I took a photo of this Kalanchoe before I went outside thinking I would use it for this post. By the time I was finished outside, I had too many photos. Since I already went overboard and sort of broke the rules with the Heuchera, I thought I just as well add a bonus photo.

I have been checking the buds on this Kalanchoe daigremontiana almost every day to see if the flowers have opened. I first noticed the buds on January 20 and since then they have grown but not opened. GEEZ! There are also more buds at the two upper stem nodes. I would say leaf nodes, but some experts say its leaves aren’t really leaves (since leaves don’t produce offsets from its margins). Anyway, I am patiently waiting…

That’s all I have to talk about at the moment, or at least it is time to stop. If you wish to participate in Six on Saturday posts, be sure to read the Six On Saturday-a participants guide from The Propagator.

Until next time, be safe, stay positive, and always be thankful. Your comments and “likes” are always appreciated. 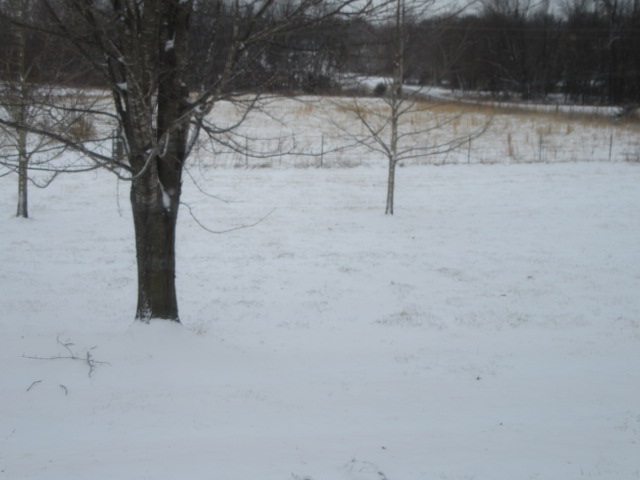 Hello everyone! I hope this post finds you all well. I just wanted to let you know my daughter has her first baby.

Meet Allison Marie. She was born at 12:30 PM (Jan. 28). She weighed 6 pounds, 2 ounces and was 19 inches long. I had to get out the tape measure for that one… I think she looks like grandpa already.

I think I have four step grandkids (1 boy and 3 girls) but this is my first from my gene pool.

That’s all I have to say for now. I have to get back to work updating pages and writing new ones for the wildflowers I identified over the summer. I still have about 120 new pages to write. I had to check out Steyermark’s Flora of Missouri again (all three volumes).

OH, one more thing. I had an enormous spike in stats today. 490 views! Usually about 60-110, more or less, from about as many visitors. Today, only 42 visitors but 490 views. What is really strange is that 438 views were from the Philippines… No comments or like’s so I have no clue who the culprit is/was. I am sure tomorrow will be back to normal but it would be interesting to have stats that good every day.

Until next time, be safe, stay positive, and always be thankful. 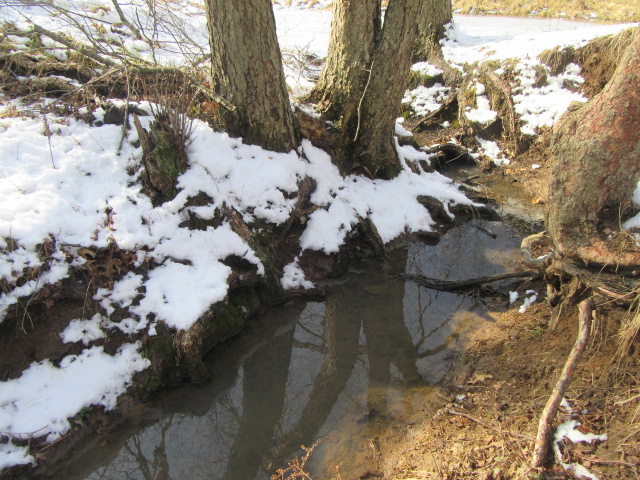 Hello everyone! I hope this post finds you all well. It is a nice day with the sun shining and the temperature is 43° F. I decided a walk to the back of the farm was in order.

The first photo was taken where one of the ponds drain into the creek about 40 or so feet away. The water was slowly moving.

This is the pond… The melted area is where the water is draining into the first photo… Maybe I should have taken this one first, huh. I just added the photos in the order I took them.

There are two ponds, one right next to the other, in the back of the farm. I always thought it was strange how grandpa dus a new pond next to the old one instead of just making the old one bigger. I imagine the old pond, the one in the photo, is spring-fed. Neither pond is very big so maybe even the newer part was never finished. That happens when water starts coming in before you are finished as with the smaller pond in the front pasture. The dozer man left for lunch and the pond was full of water when he returned. 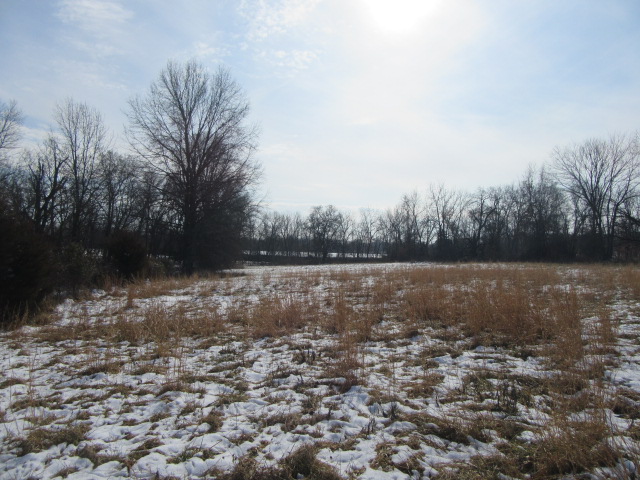 After I left the area behind the pond(s) I looked toward the southeast pasture. You can see the Farrington Park lake with all the leaves off the trees. I could hear a Barred Owl along the trail toward the west and squirrels barking by the swamp ahead.

This is the only time of the year when you can see the swamp. I suppose it isn’t really a swamp, but that’s what I call it. This area completely grows up mainly with Broad-Leaved Panic Grass (Dichanthelium latifolium) and Jewel Weed (Impatiens capensis) during the summer months. Other weeds grow between this area and where the electric fence is which is where I identified several new species of wildflowers in 2019. It is almost impossible to get to this area late in the summer. You will come out covered with several species of stick-tights and beggarticks.

I was kind of amazed there were very few birds out and about. I only saw a few sparrows, Cardinals, and Blue Jays. I could hear a Nuthatch but I could never spot it.

From the top of the hill looking toward the house, the sky was a beautiful blue with a few clouds.

The forecast for the week looks pretty good…

That’s all I have to say for now. Until next time, be safe, stay positive, and always be thankful.

Hello everyone! I hope this post finds you well. Last night I looked ut the door at 1 AM and it was snowing and had already accumulated a little. It snowed all night so when I got up there was plenty. I drove to Kevin’s house to get his truck so I could go feed his cows 12 miles or so out of town. As usual, I couldn’t make it up the hill to his house so I backed down the hill and parked. Then I had to walk up the hill to get the truck. His truck is a 4 wheel drive flatbed so it has no problems.

The highways were cleared off so getting to where I was going was no problem. I fed the cows then came back home safe and sound.

I don’t complain that much about the snow here after spending a winter in Minnesota. All is well.

I read posts on other blogs about harvesting tomatoes and onions in Australia and New Zealand because they are on the opposite side of the planet. For me, I am longing for a tropical climate like the Philippines. 🙂

Until next time, be safe, stay positive, and always be thankful.

I reblogged this post from Petals and Wings. The post includes a video you will also want to watch. 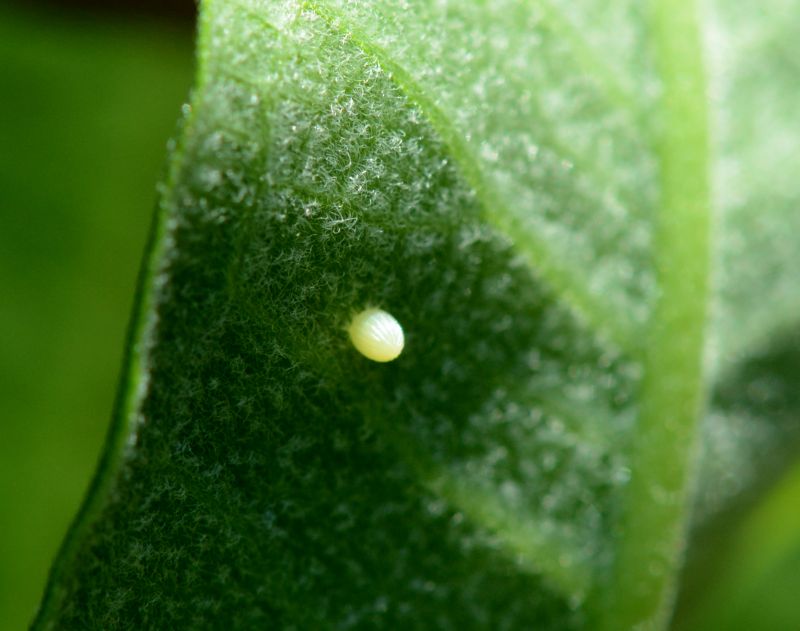 We had a very productive last summer. We raised and released 48 Monarch butterflies. We took in 50 eggs but only 48 made it to butterflies. The whole process was much more time consuming than beekeeping. To prevent disease, we changed Milkweed leaves and cleaned the nursery tanks daily. Once the last butterfly fluffed it […]