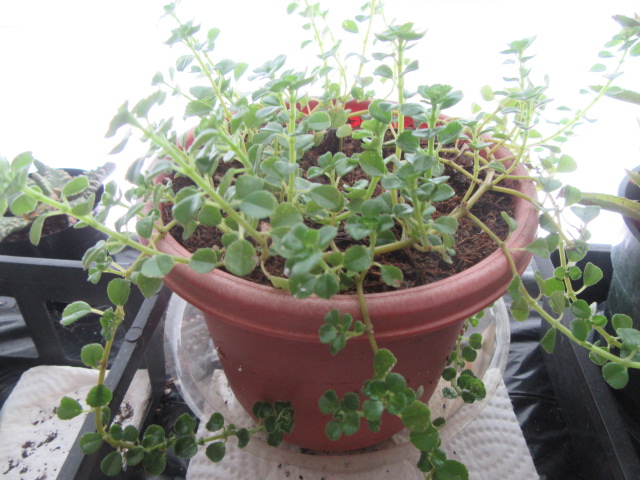 Soleirolia soleirolii (Req.) Dandy is the correct and accepted scientific name for this plant. It was described as such by James Edgar Dandy in Feddes Repertorium (Berlin) in 1965. It was first named and described as Helxine soleirolii by Esprit Requien in Annales des Sciences Naturelles in 1825.

The genus, Soleirolia Gaudich., was named and described by Charles Gaudichaud-Beaupré in Voyage autour du Monde in 1830.

As of 12-19-21 when this page was last updated, Plants of the World Online lists only one species in the Soleirolia genus. it is a member of the plant family Urticaceae with 57 genera. Those numbers could change as updates are made.

My sister and niece like coming down from the city to plant shop at the local greenhouses. She had been asking me if I had seen any Baby’s Tears for a while (among other plants) and I really didn’t know what she was talking about. My interest hasn’t really been in houseplants so I guess that’s why I hadn’t noticed them.

Anyway, in 2017, they came and she found her Baby’s Tears at Wagler’s Greenhouse. We went to the other three greenhouses and they bought several plants. I had already been so I didn’t buy any more at the time. When they were leaving, I had a hidden agenda… I had my eye on her Baby’s Tears. I started to break a piece off and it was a good thing she didn’t have a weapon. She said, “WHAT ARE YOU DOING?” OH, the look on her face! I told her I wanted a piece so I could figure out what it was. She finally said, “Oh, OK.” For a minute I began to wonder!

A few months later I showed her this plant and she asked, “Where did you get your Baby’s Tears?” GEEZ!!! She forgot I took the stem cutting! 🙂 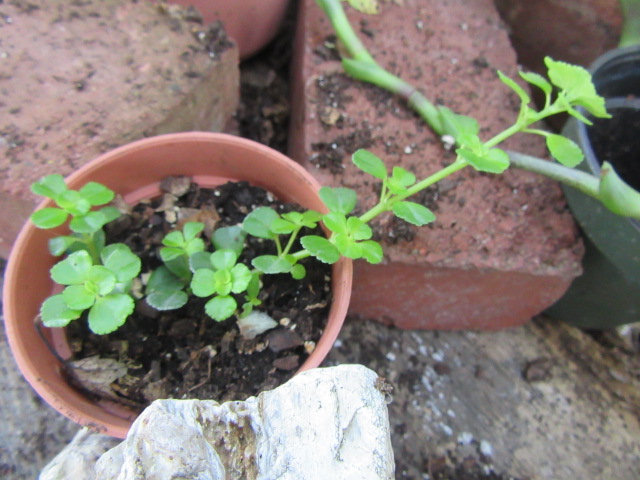 Now, the proper ID of this plant… I was somewhat puzzled because the leaf edges were serrated, somewhat like many Sedum species. I got online and looked up Baby’s Tears and found the scientific name was Soleirolia soleirolii. What was strange is that photos online don’t show plants with serrated edges. Hmmm…

I will tell you this much, this plant started growing right off the bat.

It wasn’t long before I realized I messed up… I had just laid the cutting on top of the potting soil and put a little on top. The stem continued growing in the same direction as if it were still attached. I probably should have put the end in the soil, huh?

Even though I knew I had screwed up and this plant was going to continue to grow as it pleased I just ignored it. I had several conversations with this plant about it being belligerent. It ignored me as well and said, “It is your fault I am growing like this and there isn’t anything I can do to change and you still have me in this tiny pot.” Hmmm… Well, at that point, or should I say “all this time” it was in the same small pot I had originally laid the cutting in. So, I decided I needed to do something.

It was quite evident that this plant wasn’t going to die anytime soon nor do what I thought it should. So, I took the plant, found a larger pot, and kind of wrapped it around in the pot. It smiled and said, “Now, was that so hard?” GEEZ!

As I started writing this page on 4-28-18, I once again began thinking it was weird. Why are the leaves serrated instead of round? So, I went over to the plant and looked at it again. To my amazement, the leaves were round! Now, how did that happen? How could they have been serrated and now they are round?

Once temperatures warmed up enough, I took the potted plants and put them on the plant tables behind a shed under an elm tree.

We had a bad Japanese Beetle invasion in 2018, so on July 4, I took the plant tables to the back deck (for the cactus), front porch (for the succulents and other plants). The Soleirolia soleirolii liked that very well. It said there were too many critters roaming around in the dark behind the shed…

When I took the above photo on August 26, it was beginning to flower…

Well, isn’t that interesting? The plant was LOADED with flowers when I took the above photo on September 5.

When temperatures got cooler and an “F” was in the forecast, I moved the potted plants into the house for the winter on October 10. Unfortunately, the Baby Tears didn’t survive the winter and I haven’t brought home a replacement…

There is plenty of information online about this plant. It is very popular as a houseplant because it tolerates low light levels very well and grows like a weed.

Where this plant is evergreen, it is a vigorously spreading ground cover and virtually impossible to get rid of. Where it is perennial, but not evergreen, it will go dormant and come back up in the spring. Hmmm… I wonder if the Creeping Jenny would do well as a houseplant?

In pots at least, they need their soil to be slightly moist most of the time. Well, mine was dry from time to time, but the leaves would remind me when it needed water. Being in my bedroom with the cactus and succulents made it pretty easy to neglect its needs. Even so, it managed to get my attention after a while and received weekly watering.

As far as light goes, it has been in a south-facing window with as bright a light as anywhere all winter. Most information online says it needs bright indirect light and tolerates low light levels (I mentioned that before, huh?). When outside, it will do best in light to full shade, depending on where you live. If you live in a hotter climate, then the more shade the better as this plant’s leaves will definitely scorch. Light shade is kind of like filtered light, where the sun shines through the leaves of the trees (like under the elm trees here).

Well, I think I have said about enough for now. You can check out the links below for further reading if you like.