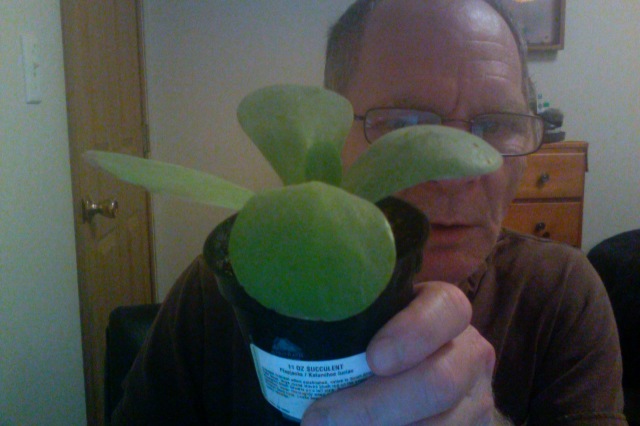 Kalanchoe luciae the day I brought it home from Wal-Mart on 2-1-16.

Kalanchoe luciae Raym.-Hamet is the correct and accepted name for this species of Kalanchoe. It was named and described by Raymond-Hamet in Bulletin de l’Herbier Boissier in 1908.

The genus, Kalanchoe Adans., was named and described as such by Michel Adanson in Familles des Plantes in 1763.

As of 11-18-21 when this page was last updated, Plants of the World Online lists 157 species in the Kalanchoe genus. It is a member of the plant family Crassulaceae with 36 genera. Those numbers could change as updates are made on POWO. 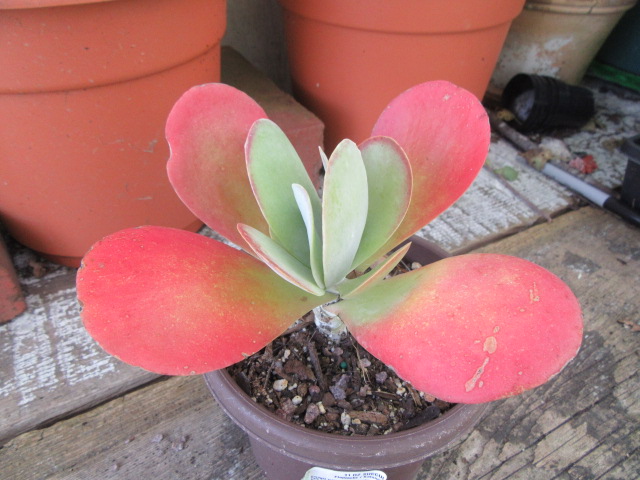 There is another similar Kalanchoe called Kalanchoe thyrsiflora but there are some differences that will show you which is which. Apparently, there are those selling K. thyrsiflora which is really K. luciae. Keep in mind that K. thyrsiflora is not as readily available so it is highly unlikely that you will find them at your local garden center. Both plants grow to only about 10-12″ in a container. They have similar leaves and have many of the same common names. In more sun, the leaves of K. luciae will turn a reddish color as in the above photo and apparently K. thyrsiflora doesn’t. Some websites say this happens during the winter when temps are cooler, but it can also occur in bright light during the summer months. Their flowers are somewhat different and the flowers of K. thyrsiflora have a stronger, sweet smell compared to a faint smell of K. luciae. Anyway, there are links at the bottom you can go to for further reading. The link to San Marcos Growers have some very interesting and useful information. One more thing about the flowers… Both of these species of Kalanchoe are monocarpic which means the parent plant will die after they flower. It will send up an offset to take its place and usually more plantlets will sprout from the main stem. These plants usually don’t flower until the plant is 3-4 years.

My Kalanchoe luciae became somewhat weird. The stem grew longer and it sent out this offset. Of course, that’s normal…  As the plants grow, scars are left behind where old leaves were. 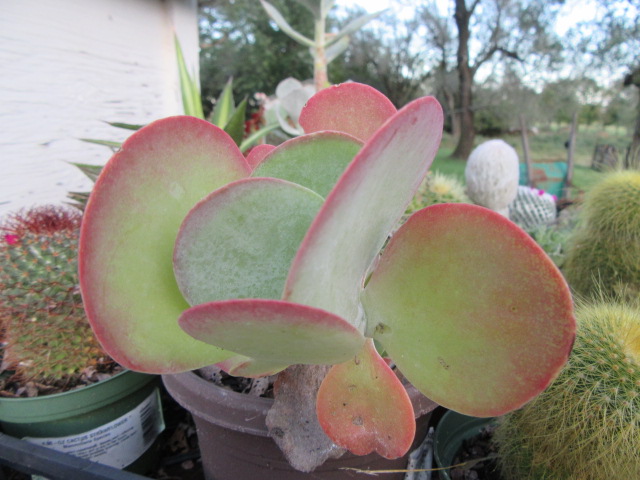 *Even though information online says this species does well in full sun to part shade, I have never grown mine in full sun during the summer. Prior to 2018, my cactus and succulents were on tables under a Chinese Elm Tree. After the first Japanese Beetle invasion in 2018, I moved the cactus to the deck at the back of the house and the succulents to the covered front porch (facing west). The succulents get light shade throughout most of the day with periods of direct sun. During the winter, all the Kalanchoe are on a shelf in a cool bedroom on a shelf in a south-facing window.

**Finding the sweet spot when it comes to cactus and succulent soil can be tricky. There are a lot of recipes online, but I had been using 2 parts Miracle Grow Potting Soil amended with an additional 1 part perlite and 1 part chicken grit. Many cactus and succulent enthusiasts recommend using pumice instead of perlite, so I switched in 2018. Now I use a 50/50 mix of Miracle Grow Potting Soil and pumice I ordered online from General Pumice. They also say a loam-based potting soil is better than peat-based, but finding a loam-based potting mix is impossible locally. I may have to experiment with the topsoil from the garden… 🙂 After I move the cactus and succulents inside for the winter and stop watering, the potting soil can get very hard. SO, I started re-potting them with fresh mix during the fall and winter so their soil will be nice and loose.

***I water my cactus and succulents on a regular basis during the summer when they are outside. Normally, the cactus on the back porch get enough rain, but the succulents on the front porch are under a roof. Sometimes I get busy during the summer and they get neglected, but they always do just fine. During the winter, I hardly ever water the Kalanchoe unless their leaves start to shrivel or get wrinkly…

I took the above photo on February 11 (2018) as I was working on this page.  The Kalanchoe luciae was in the kitchen windowsill with a few cactus for the winter. Kalanchoe are considered winter dormant but they “may” grow a little during this time. I don’t water any of the cactus and succulents over the winter unless they show signs they need “a little”. In the above photo, you can see the leaves of the Kalanchoe luciae are a little shriveled and somewhat wrinkly which means it would like a little water… You just want to give them a little over the winter months as too much can cause them to rot.

Once warmer temperatures came, I moved all the potted plants back outside for the summer.

I decided to remove the offsets from the original pot on June 30. Even though the stem of the original plant is crooked and looks a little strange, I just put its stem deeper in the pot for now. It does have roots growing under the rosette, but because of the shape of the stem under the rosette, it would be very difficult to regrow it from there. So, I will just leave it alone for now.

After a month the Kalanchoe luciae were still doing well. The original plant now has another offset.

I had to move the potted plants inside for the winter on October 10 because an”F” was in the forecast. I always photograph the plants as I move them inside. The offset in the original pot had grown A LOT!

Once nighttime temperatures were warm enough I moved the potted plants back outside for the summer. They made it through the winter inside with flying colors.

The biggest offset from the original plant is showing some good color on the front porch. It is the biggest plant now. I also put one of the offsets on the back porch with the cactus where it will be in full sun to see how it would do there.

The original plant is still growing weird and has several nice offsets in its pot.

When I took this photo on June 16, the color of the biggest offset had changed again as it became more adapted to the outside light. They are on the front porch and do not get full sun, more in the afternoon.

The original plant with its offsets again on July 15. 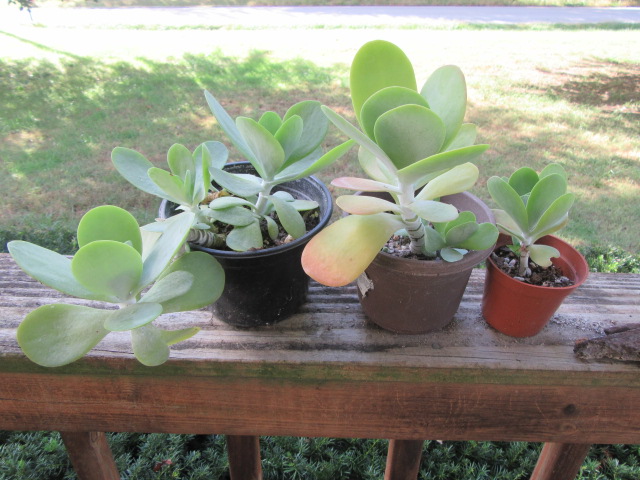 Once again, I had to move the potted plants inside for the winter on October 11 because an “F” was in the forecast. I always take photos of the plants as I move them inside and measure the cactus and some of the succulents. It’s kind of hard to measure some of the succulents, like this one, because of the way they grow. 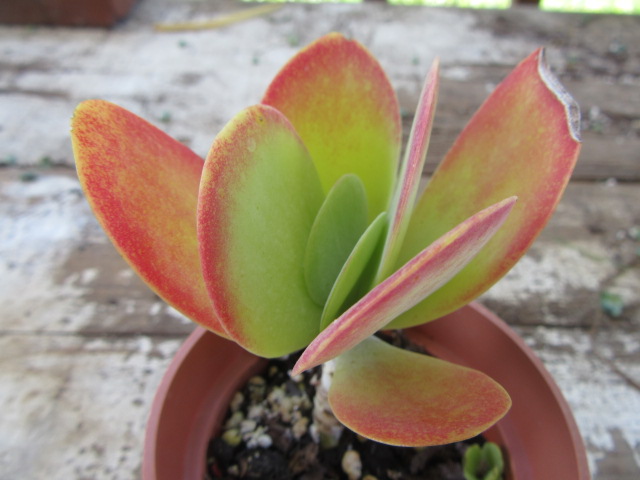 The Kalanchoe luciae that has been on the back porch for the summer has done very well. Its growth seemed to stay more compact and it took on this brilliant color. 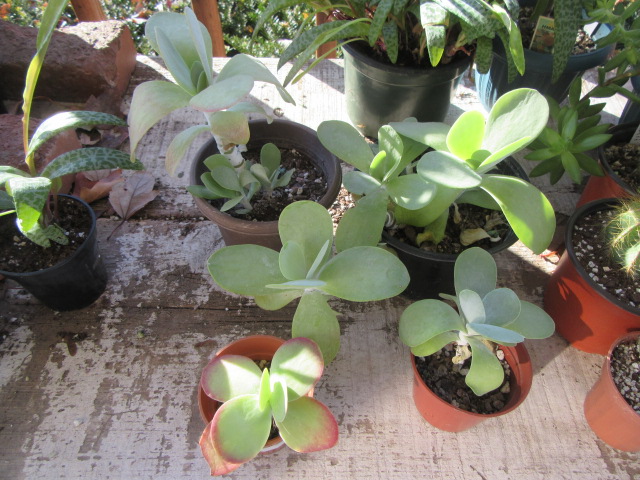 I took the plants for one of the cactus and succulent updates outside for a photoshoot on November 24. It was a nice spring-like day. As you can see, the Kalanchoe luciae that had been on the back porch at the bottom of the photo is beginning to change color from being inside. 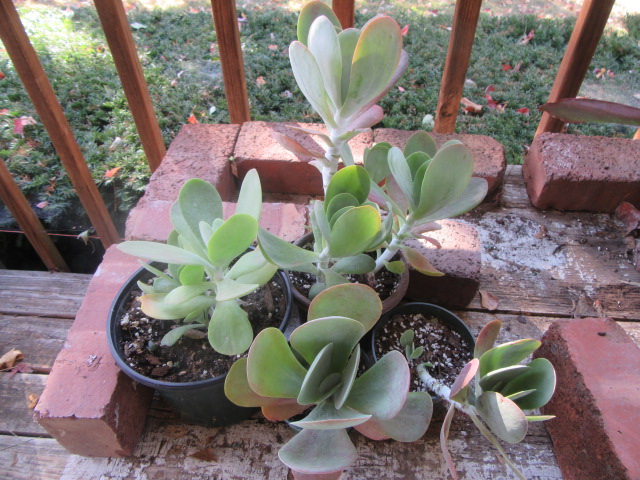 I had to move the potted plants inside for the winter on October 15 because an “F” was in the forecast. As always, I took photographs and measurements. The Kalanchoe luciae have all done very well over the summer on the front porch, now it is time for them to go to the back bedroom in front of a south-facing window.

Last year I kept one in full sun on the back porch, but in 2020 they were all on the front porch.

Typical stems are chalky white with lots of “bloom” (tomentum).

I forgot about this one when I took the group photo. It was in more sun so its leaves have a nice glow. I think this is the one that was on the back porch in 2019.

Inside for the winter once again and anxiously waiting for spring.

I took the above photo of the Kalanchoe luciae on the front porch on July 20. There are five pots and 16 plants (including offsets). 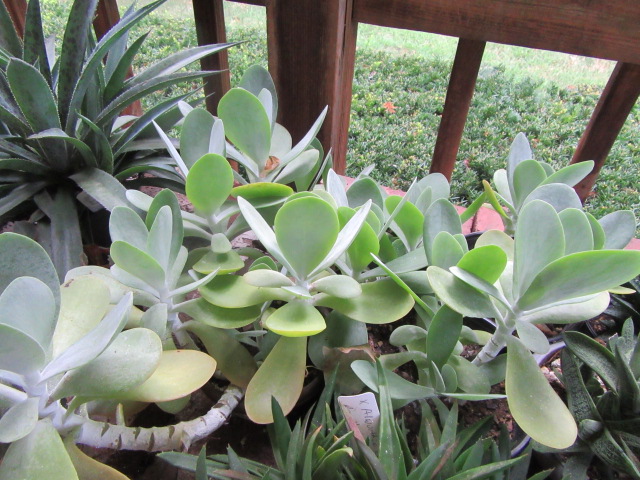 I took another photo on August 17 for a post…

I really like the Kalanchoe luciae as companions and have found them very easy to grow. I will continue adding more photos and information a time goes by.

I hope you found this page and the links below somewhat useful. If you have any comments, questions or suggestions, I would like to hear from you. Please leave a “Like” below if you have visited this page. It helps us bloggers stay motivated. 🙂