Polaskia chichipe (Rol.-Goss) Backeb. is the correct and accepted scientific name for this species of Polaskia. It was named and described as such by Curt Backeberg in Cactus and Succulent Journal in 1951. It was first named and described as Cereus chichipe by Robert Roland-Gosselin in Bulletin du Muséum d’Histoire Naturelle in 1905.

Plants of the World Online by Kew lists two accepted species in the genus Polaskia (as of 9-6-21 when the page was last updated). The genus is a member of the plant family Cactaceae with 144 accepted genera. Those numbers could change as updates are made.

There are several links at the bottom of the page for further reading.

This cactus wasn’t labeled with its name, so I posted photos the Facebook group called Succulent infatuation. A member suggested it was a Polaskia chichipe and after doing some research, they may be correct. These plants are very small, but if they are Polaskia chichipe, they can grow to 15′ and produce multiple branches. I will send photos elsewhere to see if I can get other opinions because information online says Polaskia chichipe generally has 9-12 ribs and the plants I brought home have only seven…

Polaskia chichipe is native to warmer areas of central and southwest Mexico. Where they are prized for their edible fruit. 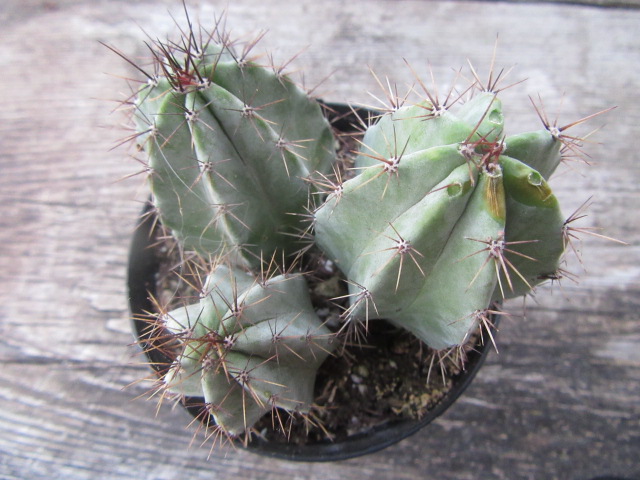 As you can see in the above photo, my plants have seven ribs. The small spines are brownish at the top and more gray toward the bottom. Information on LLIFLE (Encyclopedia of Living Forms) and other sites say they have 9-12 ribs. They have 6-7 radial spines that can grow up to 2″ long and 1 central spine. They produce pinkish-white or yellow-green flowers in the wild between March and June and produce fruit between June and August.

There was one of those darn “strawflowers” on the top of the biggest plant. It was fairly loose and I was able to get it off without too much damage. I have had several cactus that took a while for all the glue to come off. Sometimes the company sticks a big glob of glue on the flower and you just have to leave it alone or risk damaging the plant. Trust me, it will eventually come off. If the flower won’t easily come off, I take the scissors and cut off as much as I can. 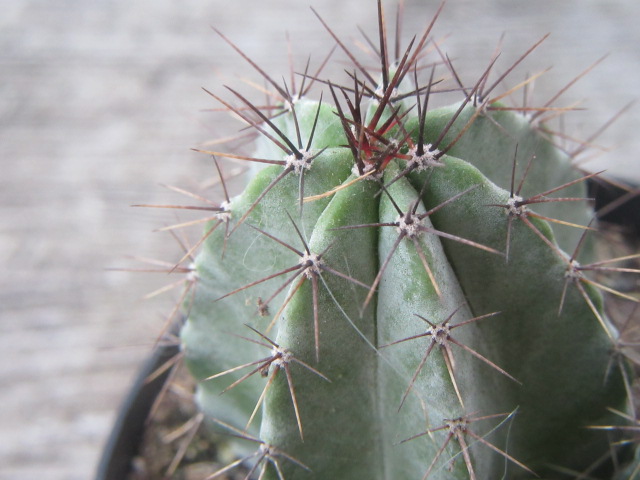 The above photo is a close-up showing the 6-7 radial spines and one central spine and prominent ribs. 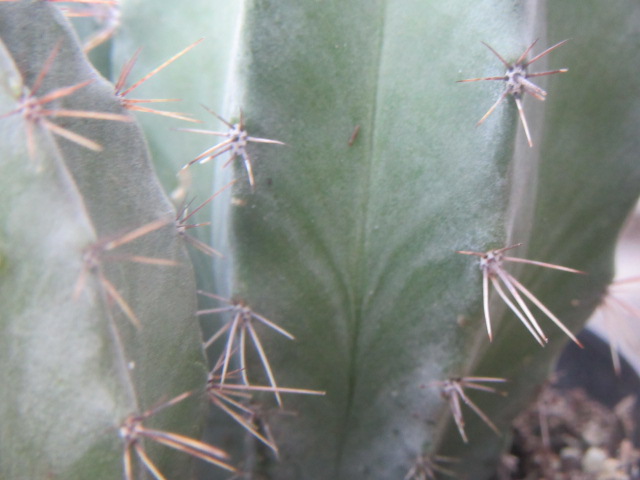 Polaskia chichipe is a slow-growing cactus. They are fairly cold tolerant but cannot withstand freezing temps. They need very well-draining soil as do all cactus. Information suggests they only like a short rest period in the winter and should be almost completely dry during that time.

The three Polaskia chichipe have done quite well over the summer on the front porch. The largest plant has grown 1/2″ taller since November 11, 2020.

There isn’t that much online about this species but I will continue adding more photos and information as time goes by.

I hope you enjoyed this page and maybe found it useful. If you have any comments, questions, or suggestions, I would like to hear from you. Please click on “like” if you visited this page. It helps us bloggers stay motivated. 🙂 You can check out the links below for further reading. The links take you directly to the genus and species of this plant. There isn’t much online about this plant yet…