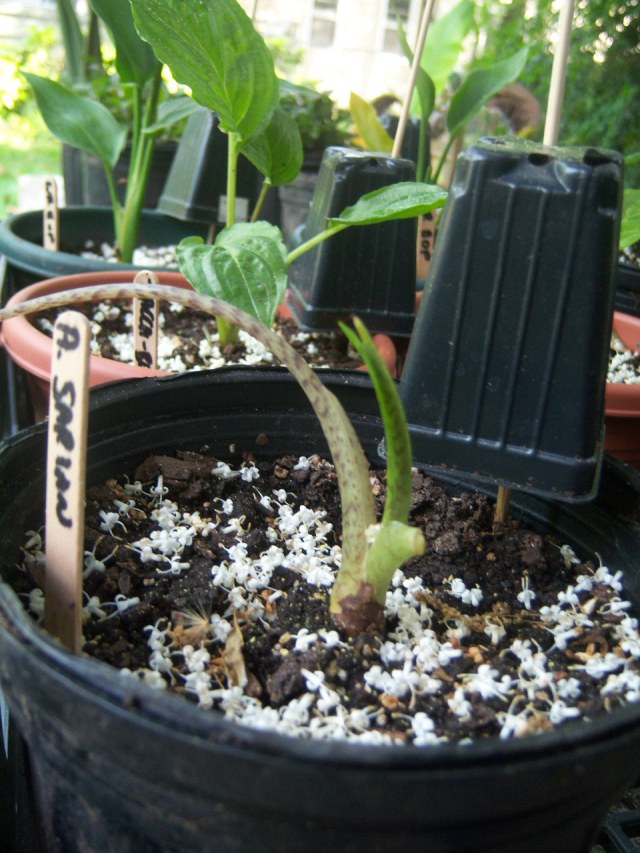 Possibly a hybrid between

The genus, Alocasia (Schott) G.Don, was named and described by George Don in Sweet’s Hortus Britannicus in 1839. They were first listed as Colocasia sect. Alocasia by Heinrich Wilhelm Schott in Meletemata Botanica in 1832.

As of 11-13-22 when this page was last updated, Plants of the World Online lists 90 species in the Alocasia genus. It is a member of the plant family Araceae with 139 genera. Those numbers could change as updates are made on POWO.

I bought my Alocasia ‘Sarian’ from Wellspring Gardens in the spring of 2012. I thought it was odd how I bought many plants and ‘Sarian’ arrived with a stub of a petiole and one leaf barely starting. Despite this, it survived and did just fine. 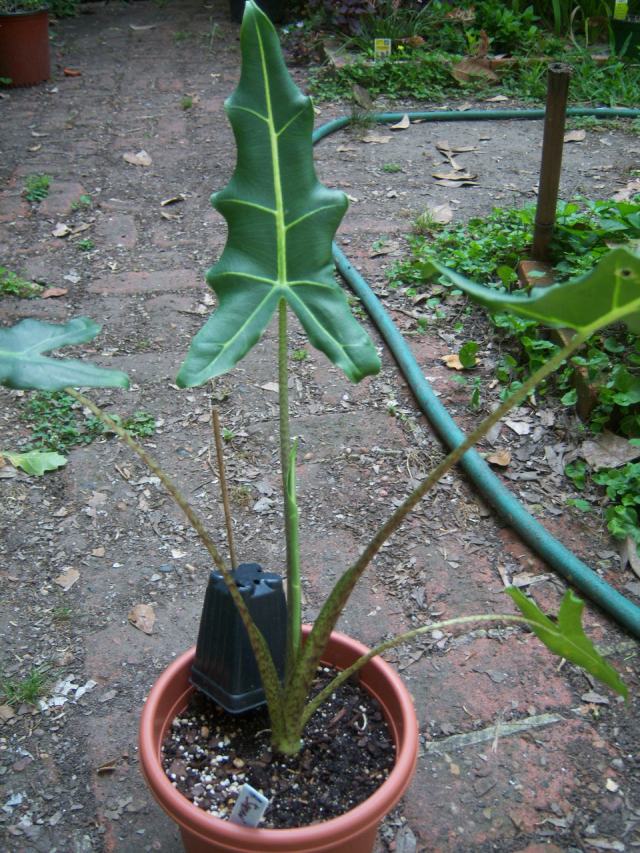 Some folks consider Alocasia ‘Sarian’ to be a species rather than a hybrid and list them as Alocasia sarian. However, there is no accepted species, or even a synonym called Alocasia sarian on any plant database. 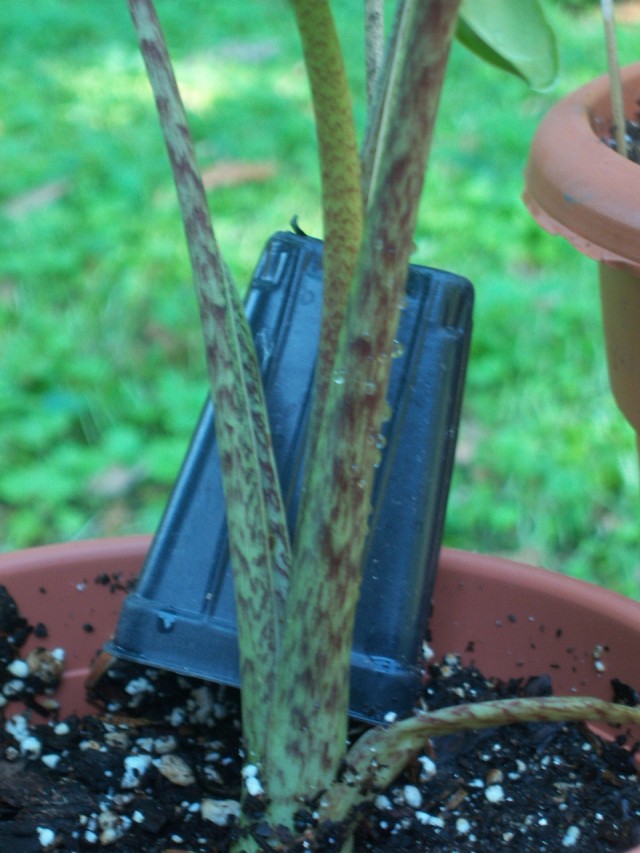 Alocasia ‘Sarian’ does NOT like temperatures below 55 degrees F so it should be one of the first to bring inside for the winter.

Some websites say Alocasia ‘Sarian’ grows to a height of 3-5′ tall while Brian’s Botanicals says 12′. How can two parents that only grow to around 36″ produce a hybrid that grows to 12′?

The above photo was taken in the east sunroom at the mansion after the temps started getting cooler.

I moved back to the farm in mid-Missouri in February 2013. The trip took 8-9 hours and it was a cold 30 degrees all the way. The last 2 hours was snowing and there was a lot of snow on the ground at my parent’s farm. I moved the plants from the trailer to the basement with a lack of a better place at the time. I gave up most of my plants, but I still brought A LOT with me. While most of the Alocasia did fine, Alocasia ‘Sarian’ did NOT like the cold trip. It decided it was time to go dormant but luckily the temps warmed up and I got it outside before that completely happened.

It will be OK for now…

Such beautiful leg(s), I mean, “What a beautiful petiole!” 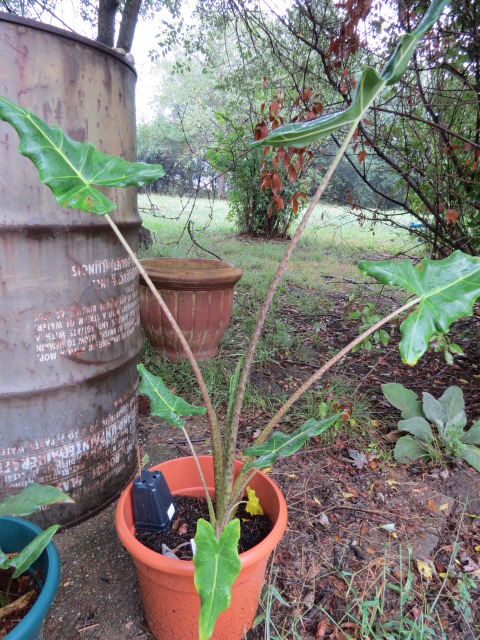 The Alocasia ‘Sarian’ was looking really good again by September 17, 2013. 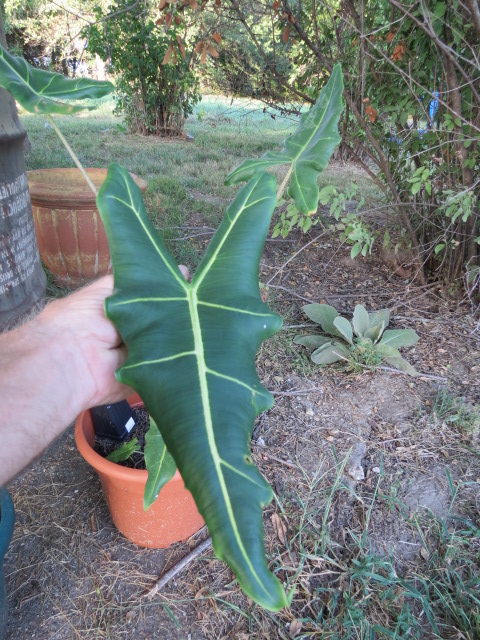 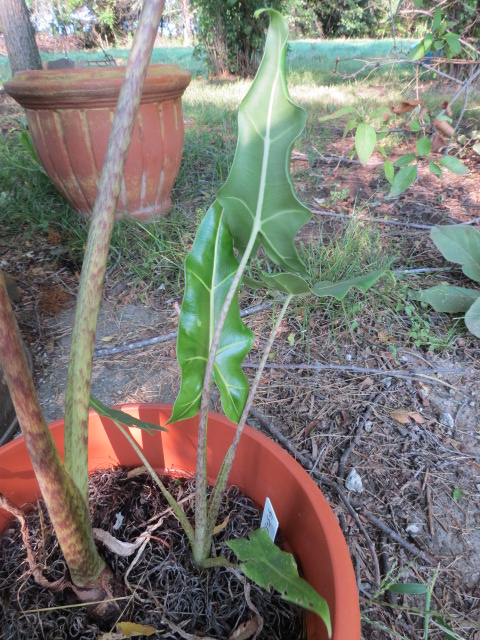 Even her baby is doing great!

We got through the summer of 2013 with flying colors then when temps started getting cooler I had to move the Alocasia to the basement for the winter.

I must admit Alocasia ‘Sarian’ has been a challenge. Experience has taught me a few things about Alocasia and that is that some species and hybrids go dormant very easily. Of course, ‘Sarian’ did it AGAIN. The photo above was taken on 7-12-14 (#231-10). Although it did come up in 2014, it remained kind of weird for the most part. The above photo was the last one I took of my Alocasia ‘Sarian’ companions.

SOMEDAY may try another Alocasia ‘Sarian’ when I have better conditions…