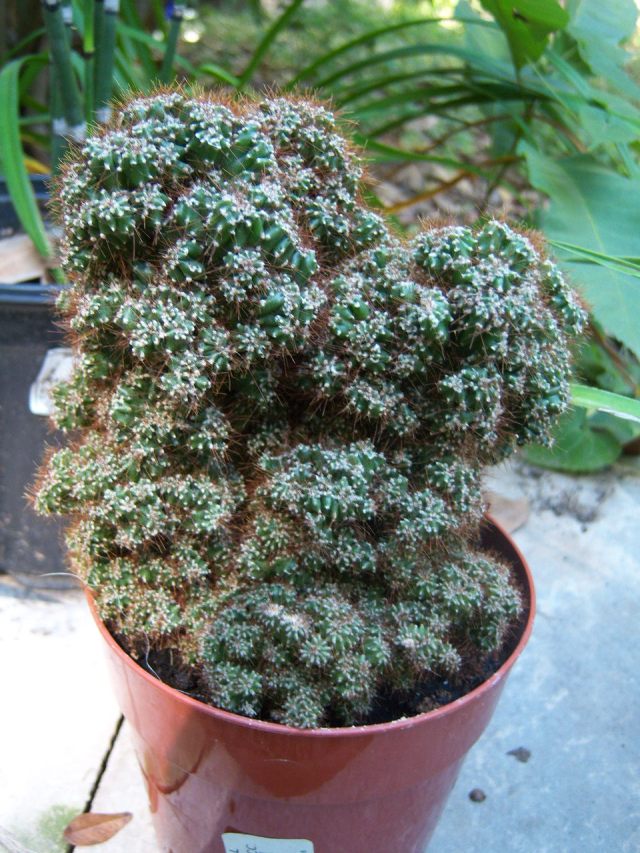 Cereus repandus (L.) Mill. is the correct and accepted scientific name for this species of cactus. It was named and described as such by Philip Miller in the eighth edition of Gardener’s Dictionary in 1768. It was first described as Cactus repandus by Carl von Linnaeus in the first edition of Species Plantarum in 1753.

A synonym but commonly used name, Cereus peruvianus (L.) Mill., was also named and described as such by Philip Miller in the same publication. Carl von Linnaeus also described it as Cactus peruvianus in the same edition of Species Plantarum.

Cereus peruvianus var. monstrosus DC. was named and described by Augustin Pyramus de Candolle in Prodromus Systematis Naturalis Regni Vegetabilis in 1828. This name may have been invalid.

The genus, Cereus Mill., was named and described by Philip Miller in the fourth edition of The Gardeners Dictionary in 1754.

Plants of the World Online by Kew currently list 25 accepted species in the Cereus genus (as of 1-15-21 when I am updating this page). It is a member of the Cactaceae Family with 144 genera. Those numbers could change as updates are made.

I am calling this cactus Cereus repandus f. monstruosus even though it is not an accepted infraspecific name. It is, after all, a monstrose or monstruosus form so it should be listed as such. Some say monstrose, monstrosa, monstruosus.

The “var.” (variety) in a scientific name after the species name is applied when a mutation occurs in nature. An “f.” (form) is used to indicate the mutation that occurred in cultivation (garden, greenhouse, nursery, etc.). Information indicates ‘Rojo’ is the cultivar (cv.) name of a monstruosus form of a cactus that did not occur in nature.

While there are “monstrosus” forms found in the wild, the cultivar ‘Rojo’ originated in cultivation. There are many different monstrosus “forms” and “varieties” and some look quite interesting and make great plants to collect.

THERE ARE A FEW LINKS AT THE BOTTOM OF THE PAGE FOR FURTHER READING: 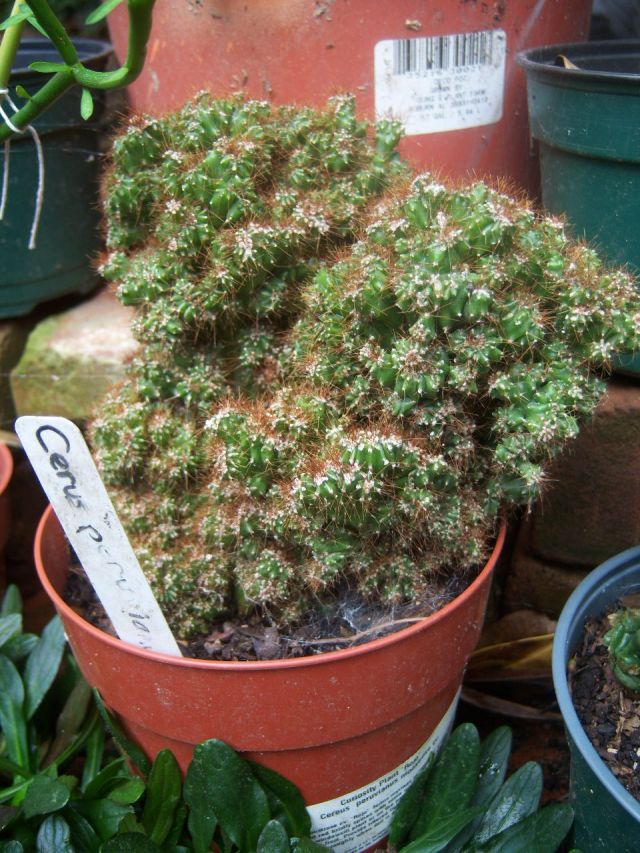 I bought this cactus on 9-15-10 from Lowe’s in Greenville, Mississippi. The label stated it was a Cereus peruvianus monstrose cv. ‘Rojo’. When I was making my first Belmont Rooster blog in 2013, I found The Plant List and it said the Cereus peruvianus was a synonym of Cereus repandus but did not list a “monstrose”.

The industry continues to sell plants listed as Cereus peruvianus var. monstrose ‘Rojo’ even though Cereus peruvianus is not a valid name. This species was never a native of Peru which is probably why it is now a synonym of Cereus repandus.

Daiv Freeman of the CactusGuide has this to say about Cereus peruvianus: “Cereus peruvianus is not an officially recognized name and is often applied to “cereus-like” cactus in cultivation with no known origin.” 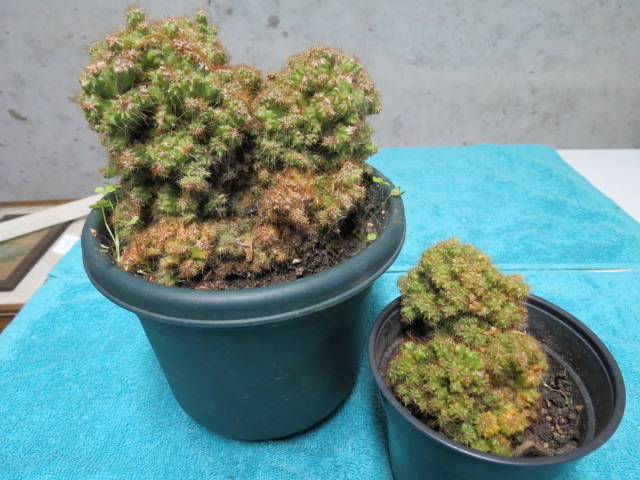 When I moved back to the family farm in mid-Missouri in February 2013, I brought my Cereus repandus f. monstruosus ‘Rojo’ with me. When I repotted the cactus in the spring of 2012, I think, and wound up with four. I gave one away and one died which left me with these two. 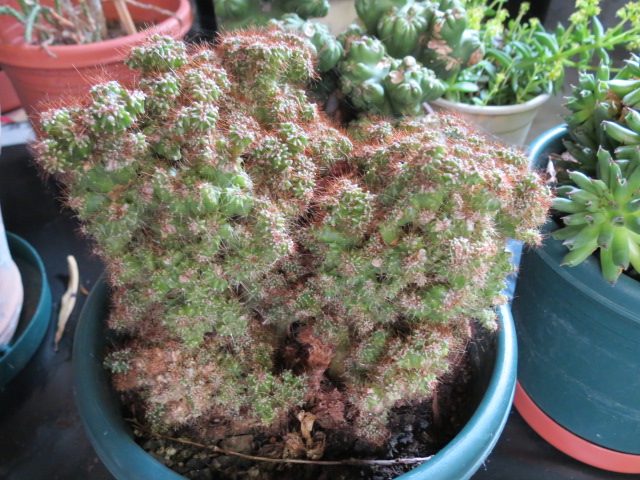 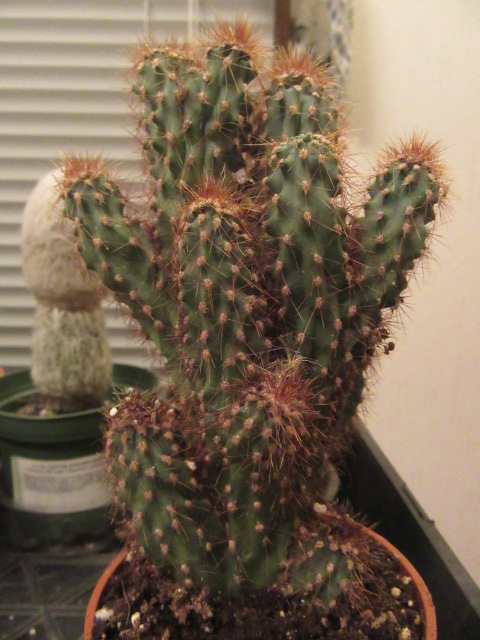 Although this one is much different in shape than my first Cereus repandus var. monstrosus ‘Rojo” is still the same cultivar. Even without being a cultivar, there are many different forms of “monstrosus” shapes in the wild and in cultivation. The color of the spines is characteristic of the cultivar ‘Rojo’. 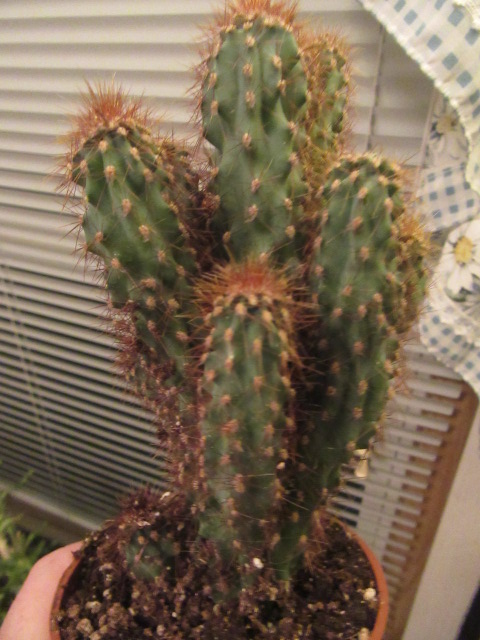 My new Cereus repandus f. monstruosus ‘Rojo’ measured 5 1/2” tall x 3 3/8” wide. It is in a 3 1/4” wide x 3” tall pot. I think it has a ways to go before it needs repotting but I will check the roots later. I bought four cacti and two succulents in all and they were soaking wet… 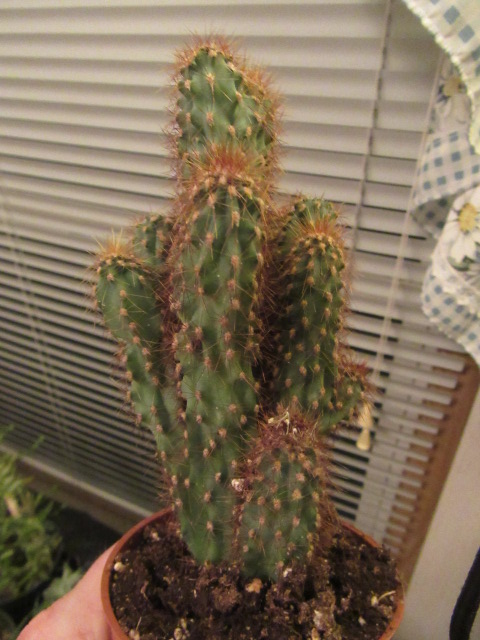 I think this new Cereus repandus f. monstruosus ‘Rojo’ is going to make a great addition to my cactus collection 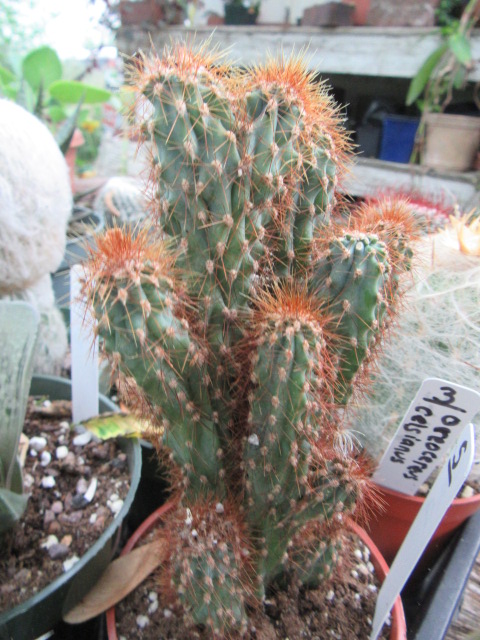 Once the temperatures warmed up I moved the potted plants from the house back outside again for the summer. 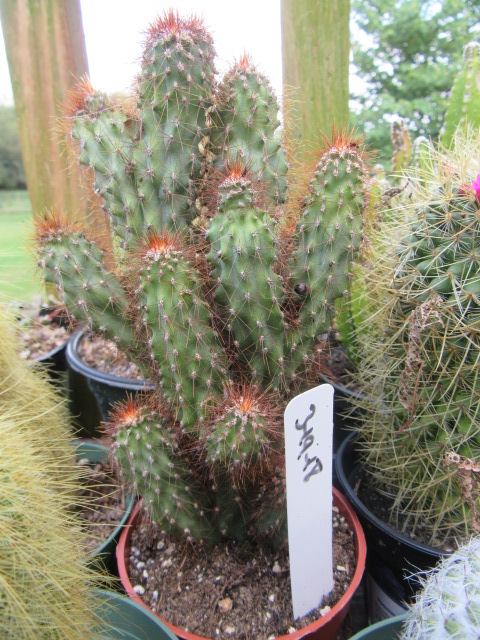 I moved most of my plants to the front porch on July 4 then later I moved the cactus to the back porch. We had a Japanese Beetle invasion and the location the potted plants were in completely changed. Two of the main reasons I moved the plants was because the light completely changed plus the beetles were beginning to sample the plants… Crickets can also be an issue there, even for a few cactus. 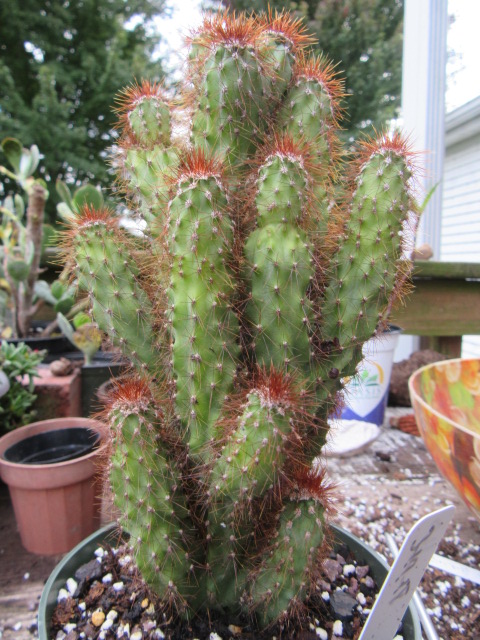 As temperatures started cooling down I had to move the potted plants inside for the winter. I always measure the cactus when I move them back inside because some grow so slow I like to measure them to see if they are growing. Even though I only had this cactus a few months, I measured t again anyway. When I moved the plants back inside on October 10, it measured 6 7/8″ tall x 3 3/4″ wide. WOW! It was 5 1/2″ tall x 3 3/8″ when I bought it on March 19! 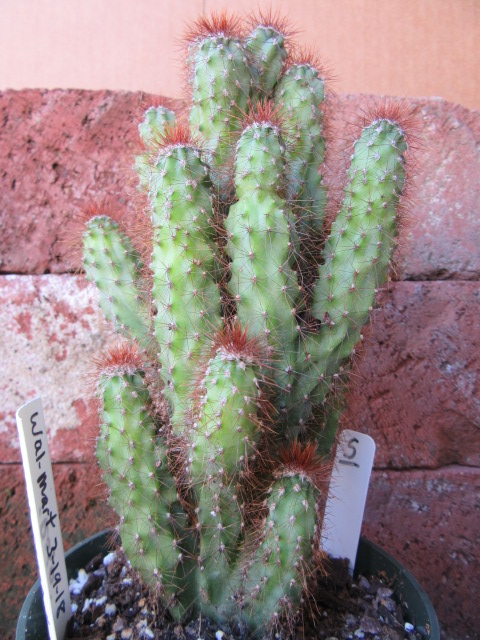 I took the cactus outside on November 29 for a photoshoot since it was a nice spring-like day. I wanted to make a post comparing the cactus in my collection. 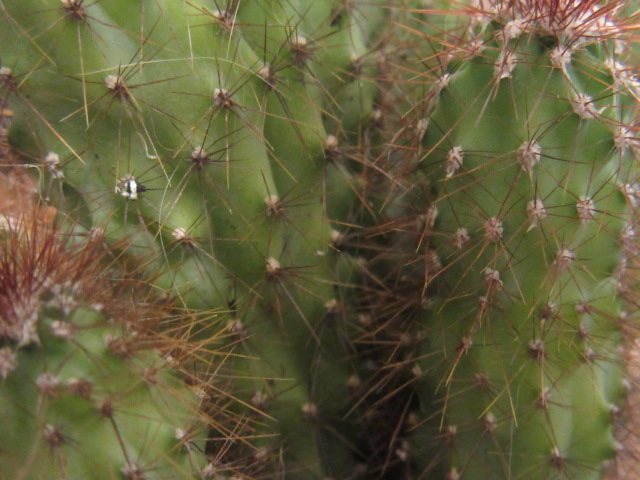 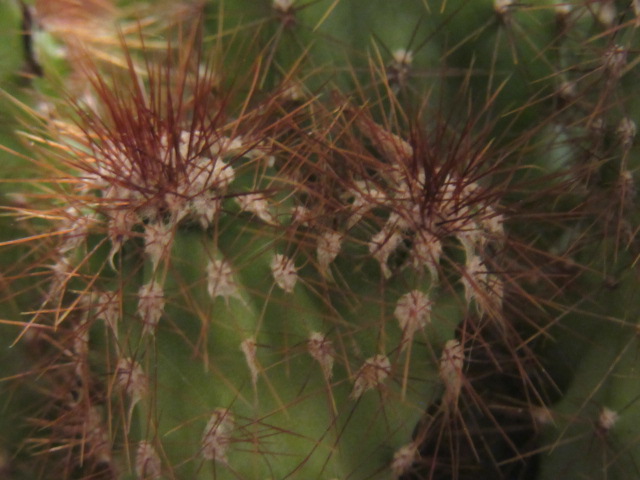 The spines are thin and kind of wiry. You can run your finger down them and not get stuck. 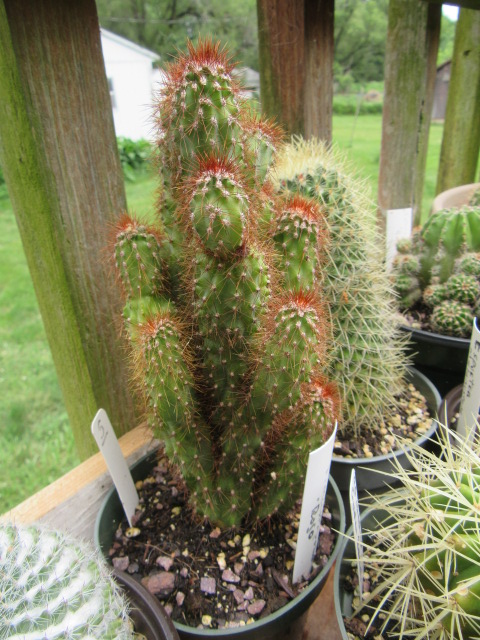 The cactus are on the back porch and most of the succulents are on the front porch once again for the summer. The Cereus repandus f. monstruosus ‘Rojo’ made it through the winter inside with flying colors and is now enjoying the sun. 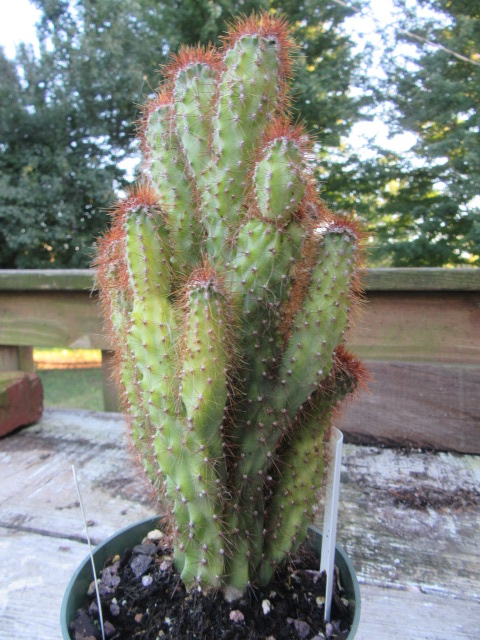 Once again, “F” was in the forecast so I had to move the potted inside on October 11. As usual, I took photographs and measured the cactus as I was bringing them inside. The Cereus repandus f. monstruosus ‘Rojo’ measured 8″ tall x 3 3/4″ wide. It has grown 2 1/2″ taller since I brought it home in March 2018. 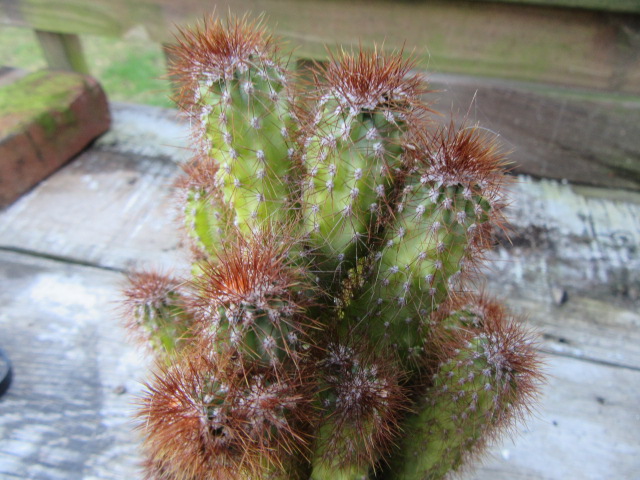 This is a great plant from top to bottom! 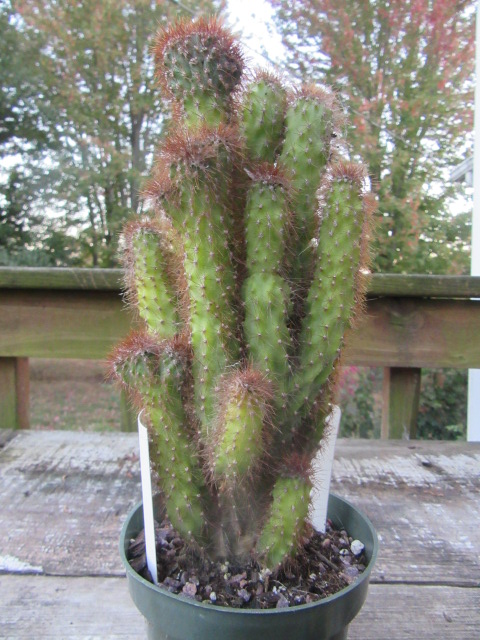 The link to Llifle below will take to pages on the species and also useful growing information.

I hope you enjoyed this page and maybe found it useful. If you have any comments, questions or suggestions, I would like to hear from you. Please click on “like” if you visited this page. It helps us bloggers stay motivated. 🙂 You can check out the links below for further reading. The links take you directly to the genus and species of this plant. You can also send me an email at thebelmontrooster@yahoo.com.