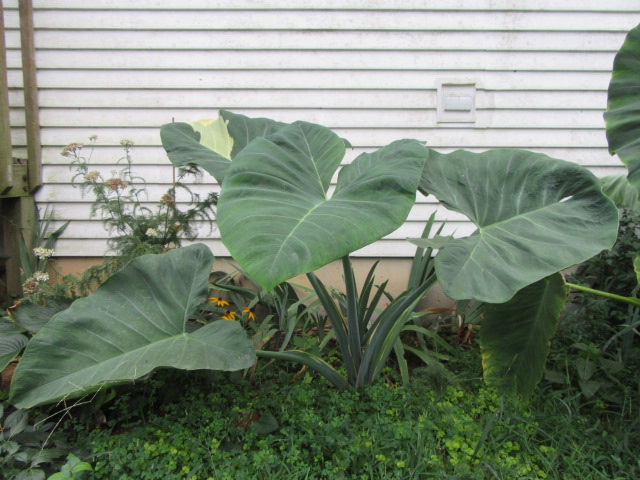 Xanthosoma sagittifolium (L.) Schott is the correct and accepted scientific name for this Aroid. It was named and described as such by Heinrich Wilhelm Schott in Meletemata Botanica in 1832. It was first named and described as Arum sagittifolium by Carl von Linnaeus in the second edition of Species Plantarum in 1753. Plants of the World Online by Kew listed 34 synonyms of this species when I updated this page on 4/29/19).

The genus, Xanthosoma Schott, was also named and described by Heinrich Wilhelm Schott in Meletemata Botanica in 1832. Plants of the World Online by Kew still lists 195 accepted species in the genus (as of 4/29/19). The number of accepted species could, and probably will change.

It is very interesting how I came to have this Xanthosoma robustum OR X. sagittifolium as a companion. When my sister came down from the city to go plant shopping at the local Amish greenhouses in the spring of 2017 I found a Colocasia gigantea ‘Thailand Giant’. I brought it home and it did very well. I stored the rhizome overwinter in the basement. It did fine until just about time to plant the Colocasia the next spring when I noticed it had rotted. So, when my sister came again in 2018, when we went plant shopping, I checked with the same greenhouse and he said he got his order in too late and the supplier had ran out of Colocasia gigantea ‘Thailand Giant’. So, I checked several reliable sources online but didn’t want to ay some of their prices. I found a listing on Ebay for bulbs…

I will admit I thought that was a bit strange since every other source was selling plants grown from tissue culture. His listing said the bulbs he was selling was “from” the Wellspring strain. I assumed he was talking about Wellspring Gardens which is in Florida. I had bought A LOT of plants from Wellspring in the past (starter plants) including a Colocasia gigantea ‘Thailand Giant’ in 2012. I messaged the seller on Ebay and after he replied I ordered a bulb from him. I think I ordered partly out of curiosity. He later said he had shipped me the largest bulb and even lost money due to shipping fees.

Although I am using the name Leucocasia gigantea ‘Thailand Giant’ in the story below, you will see why if you continue reading. It is because that is what I thought it was until I posted photos on the International Aroid Society Group on Facebook on September 16 (2018)… I had previously found out the name Colocasia gigantea had changed back to Leucocasia gigantea. I changed the name in the photo captions, though…

The new Leucocasia gigantea ‘Thailand Giant’ rhizome arrived on May 22. The package was wrapped in a newspaper with Chinese writing.

The newspaper was the Epoch Times from Atlanta, Georga. I thought that was interesting so I had to check it out. The Epoch Times was founded in 2000 in New York City by a group of Chinese-American Falun Gong practitioners. The newspaper is either sold or distributed free of charge in 35 countries in 21 languages. The founders say they were responding to censorship inside China and a lack of international understanding about the Chinese repression of Falun Gong. The newspaper can be read online and receives 105 million page views per month from 20 million visitors. Anyway, the Wikipedia article and the newspaper’s website are quite interesting. 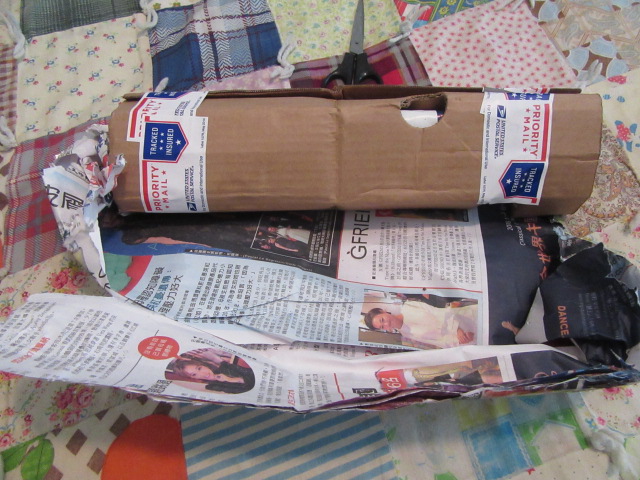 I unwrapped the newspaper and found a box…

Inside the box was an envelope… 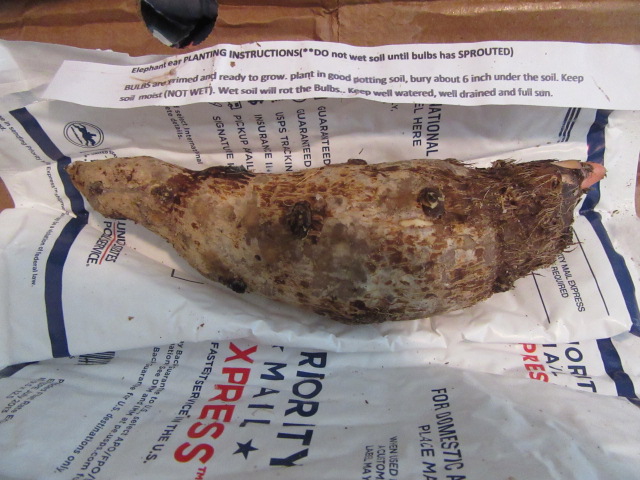 I opened the envelope to find a, umm, sweet potato? Well, it sure looks like the white sweet potatoes I grew in 2016. 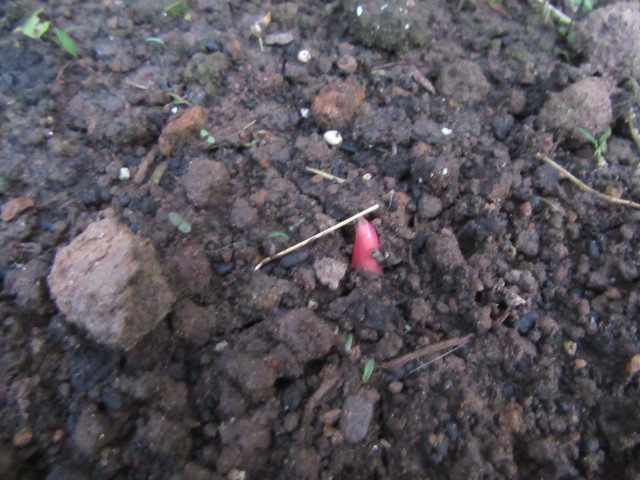 I planted the Leucocasia gigantea ‘Thailand Giant’ RHIZOME in the north bed a little farther over than I had planted the one last year. I had previously moved the Hosta ‘Empress Wu’ farther away from the corner and the new TUBER is to the right of it. I noticed this sprout coming up on June 3.

The new plant started growing and was off to a good start. You can see in the above photo taken on June 14 that its second leaf has emerged. As you can see, if you know anything about Colocasia, something is a little weird… 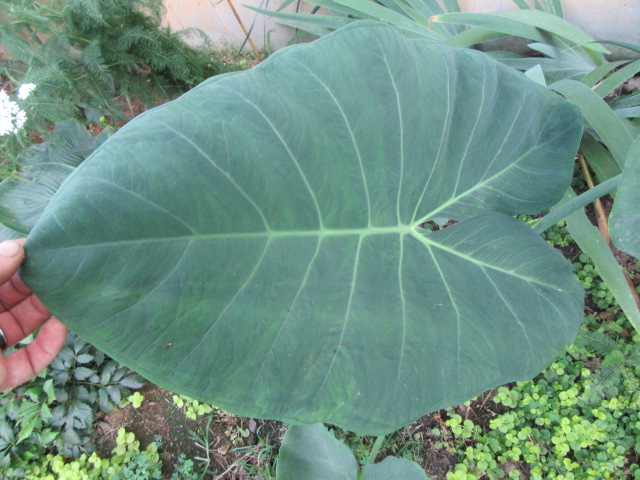 I was looking at this leaf on July 4 and taking notice of how different it looked compared to the Colocasia and Alocasia leaves. It was also different than the Leucocasia gigantea ‘Thailand Giant’ leaves from 2018 and 2012… Hmmm… 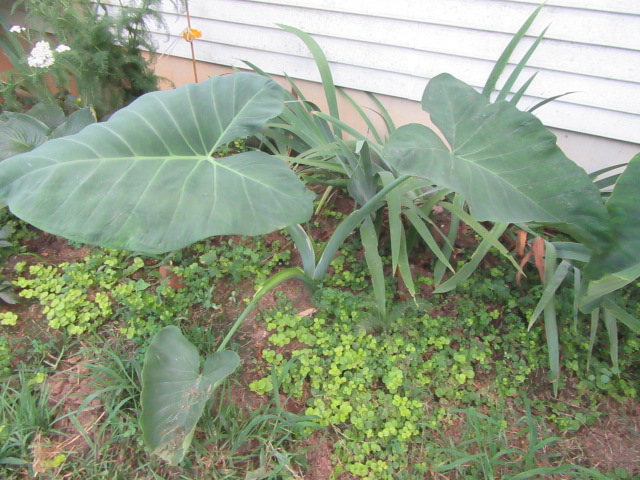 Looking good and doing well… Ummm… I didn’t notice at first, and not until I looked at this photo, but there is something strange about the petiole where a new leaf is beginning to emerge. Sometimes when I am taking a lot of photos, I don’t notice everything.

While I was mowing on July 23 I was stopped dead in my tracks when I saw the new leaf. I am always anxious for new leaves to start growing because each new leaf grows larger than the one before it. But this leaf was completely different…

I have seen a few different Alocasia and Colocasia cultivars online that are variegated, but never any photos of a variegated Colocasia gigantea ‘Thailand Giant’ (I mean Leucocasia). This is completely weird! How could this Leucocasia gigantea ‘Thailand Giant’ produce a variegated leaf? And what the heck about the top of the leaf! Hmmm… Something is definitely weird…

Well, by this time I was completely confused!

If it were a Leucocasia gigantea ‘Thailand Giant’ it would be MUCH taller by now.

I couldn’t take it anymore so I posted photos of this plant on the group called International Aroid Society on Facebook.

One of its members, Robert McCracken, promptly said it was a Xanthosoma sagittifolium. We sent a few replies back and forth several times…

Later, I had a few questions about storing this plant for the winter. I had never grown a Xanthosoma before so was curious about its winter treatment. Do I dig it up and store it in a pot in the basement like the Alocasia? Do I let it get frost bit like the Colocasia esculenta then dig the rhizome and store it? So, I messaged Robert again… This time, he heard me message him and we chatted for a very long time. 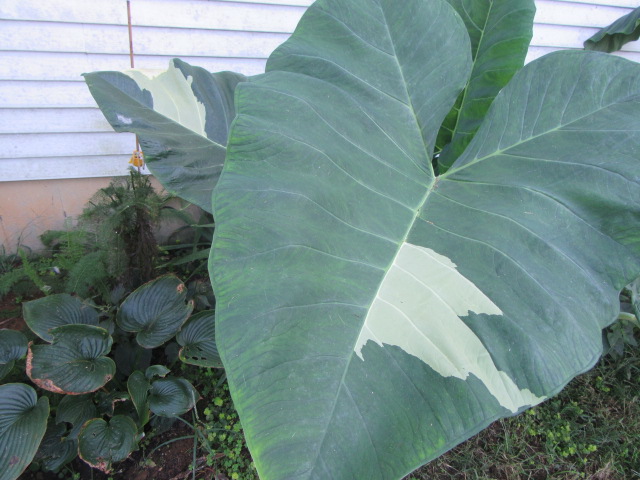 So, I did a little research… Robert had given me several links about the Xanthosoma genus and many species.

One of the key features of the Xanthosoma, as shown in the above photo, is how the top part of the leaf goes clear down to the apex (where the petiole attaches to the leaf). Remember, the petiole is what you may refer to as a “stem”. It is correctly called a petiole and not a stem. Notice the width between the edges of the leaves (now, I don’t even know what you call it).

The leaves are very thick and the “seam” around the leaf edge act as a gutter to drain water.

The midribs are very pronounced, more than on the Colocasia and Alocasia (at least the ones I grow). 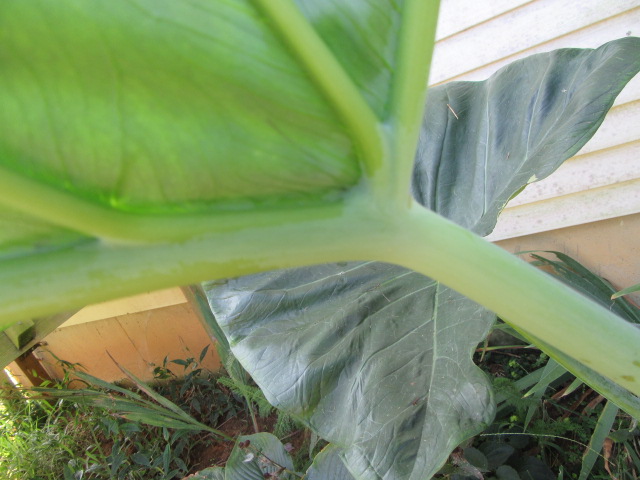 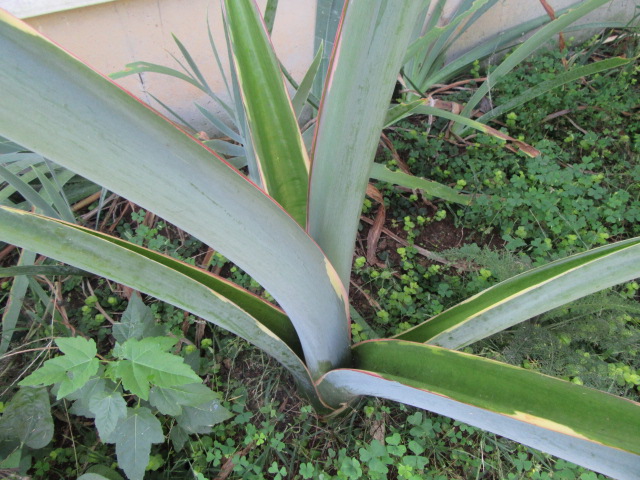 Even the petioles have variegation…

NICE! The leaves are very dark green and have a bright shine to them…

All I can say is that this is an AWESOME plant! 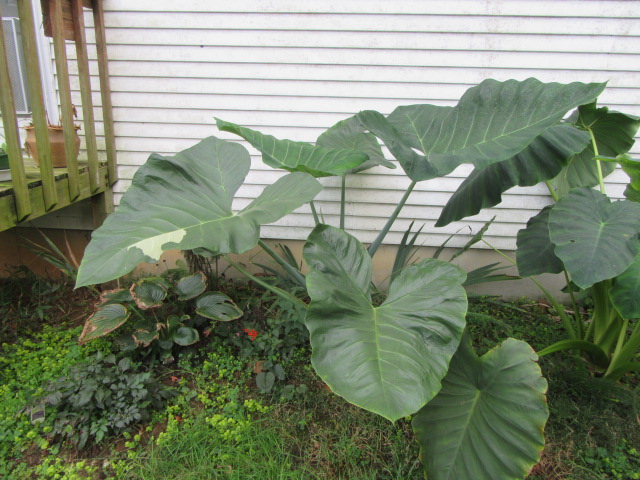 I am not upset that I was sent something I didn’t order. It was sure a good way to have experienced such a magnificent plant. 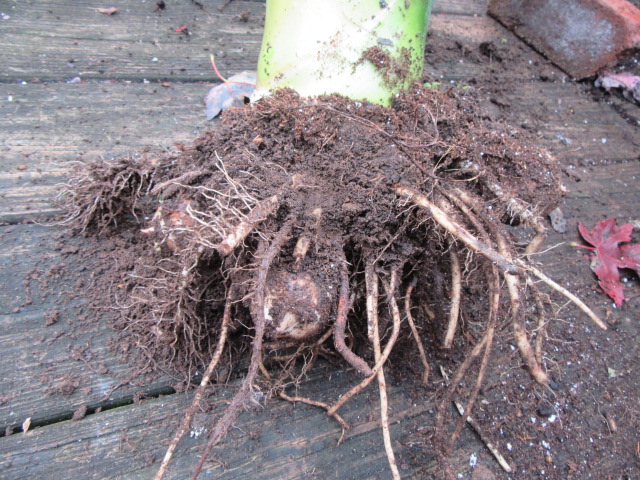 I had been putting off the inevitable for long enough. I had chatted with Robert again and he suggested not to let it get frost bit. So, when the “F” was in the forecast, I had to dig up this plant… As with the Alocasia and Colocasia, they really don’t have a massive root system. One might think they would judging by the size of the plants… 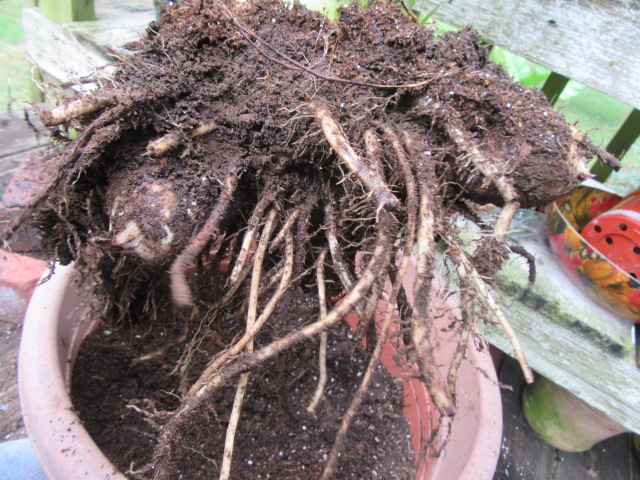 Well, it does have three offsets they just hadn’t made it to the surface yet. No doubt, in a warmer zone with enough time, they would have made it to see daylight.

Since I was just putting the Xanthosoma in a pot for the winter I didn’t need a HUGE pot. I know, it looks weird… Believe it or not, this plant is 60″ tall and 80″ wide!!! I was wondering how in the heck I was going to get it through a 32″ wide door? When I repot the Alocasia, which I keep in pots (except for the three I experimented with) I always put 3 stakes in the pot and tie the plants to them. They grow vertically and they need support until their roots grow to stabilize them. This one is different… No growing straight up about it!

Well, since it was standing up on its own in the pot, I thought maybe I could carry it and it would stay that way. Well, that didn’t happen. On the way down the steps of the back porch, the plant fell right out of the pot! GEEZ! So, I took the pot to the basement and repotted the plant there. I put it in front of the Alocasia that were already in the basement. The Alocasia, even though there are several, don’t take up as much room as the Xanthosoma does.

When I moved the plant to the basement, the idea was to get it to go dormant for the winter so I didn’t give it any water. Last time I checked on October 31, the Xanthosoma is still like it was when I took it to the basement.

Hopefully, the Xanthosoma will survive the winter, dormant or not, and I can plant the rhizome in the bed again next spring.