Opuntia (L.) Mill. is the correct and accepted scientific for this genus of plants in the Cactaceae family. It was named and described as such by Philip Miller in The Gardeners Dictionary in 1754. Before that, pretty much all species of cacti were all lumped in the genus Cactus which named and described by Carl von Linnaeus in Species Plantarum in 1753.

Plants of the World Online by Kew lists 129 species on the Opuntia genus (as of 2-9-21 when I last updated this page. It is a member of the plant family Cactaceae with 144 genera. Those numbers could change as updates are made.

When I was living at the mansion in Mississippi, a good friend of mine came over one day in 2010 or 2011 and told me about a prickly pear cactus laying in a driveway across the creek. He said no one lived in the house and I should get the plant. He said it was laying in the driveway in a broken pot.

So, we went to investigate. Sure enough, it was just as he said. We walked around the property for a while and found many plants that were not there by accident and it was evident that whoever planted them had been a definite plant collector. In the rear of the backyard was a good-sized black bamboo “forest”. Not only that, but there were several of the BIGGEST and neatest Crape Myrtle trees I have ever seen. Believe me, I am NOT a fan of Crape Myrtle and usually refer to them as Crap Myrtle. The trunks on these trees were a mottled reddish-brown and grey which was much different than the others I had seen and the ones in my own yard.

I went to the neighbor’s house and asked who owned the property. She pointed to a house farther down the street so Kyle and I went there. Their yard was AMAZING to say the least. Come to find out, the owners of the property were state horticulturalists and worked at the experiment station. She told me I could have the cactus as well as all the bamboo I wanted…

Anyway, when Kyle and I went to get the cactus, I took a furniture blanket to wrap it in. It didn’t help much because those long thorns went right through it. I really didn’t know what I was going to do with it, so I put it in a big nursery pot. 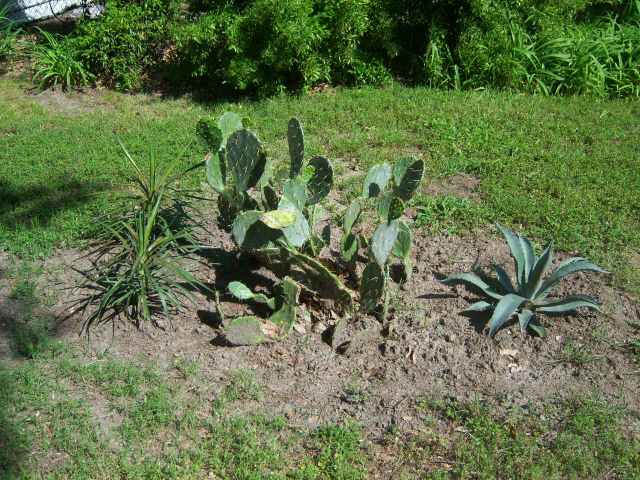 I think in 2012 I planted it in the ground in the yard next to the driveway. Believe me, it was quite a chore transplanting the Prickly Pear!

I didn’t think about bringing a couple of pads of the cactus with me when I moved back to the family farm in mid-Missouri in February 2013.

In 2016 I was at the house of one of my best friend’s mother and she had a pretty big patch of Prickly Pear. It was LOADED with fruit and I asked her if she had eaten it before. She said no and promptly broke off a piece and ate it.

In the early 1980’s when I was living here at the farm (after my grandfather passed away) I needed some rocks to make a new flower bed and other things. I had been in the hatchery business and we had a lot of flock owners farther south. I had noticed one area had a lot of neat rocks along the road that would be perfect. SO, one day, I went to collect some. On the journey, I found some prickly pear and ground one home. After I moved away in 1987, dad got rid of the cactus once he started mowing the yard on the farm.

Trying to figure out what species of Prickly Pear either cactus was would be a nightmare. There are so many species and to me they all look a lot alike for the most part. Maybe someday I can do some research and narrow it down somewhat.

Even though I didn’t provide much information, I hope you enjoyed the story. I have added a few links below for your reading and research pleasure. If you have any comments, questions or suggestions, I would like to hear from you. Please click on “Like” if you have visited this page. It helps us bloggers stay motivated. 🙂

OH YEAH! For those of you who don’t like thorns, there is a thornless species. Here is a very interesting article on the Luther Burbank Home and Gardens website.