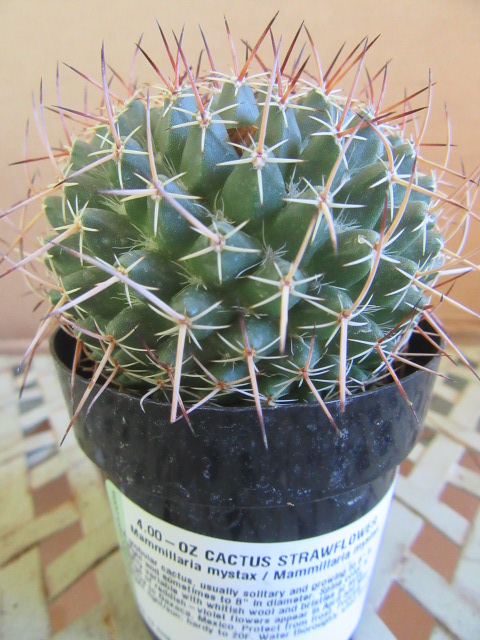 Mammillaria mystax Mart. is the accepted scientific name for this species. It was named and described by Carl (Karl) Friedrich Philipp von Martius in Hortus Regius Monacensis in 1829.

The genus, Mammillaria Haw., was named and described by Adrian Hardy Haworth in Synopsis Plantarum Succulentarum in 1812.

As of 11-9-21 when this page was last updated, Plants of the World Online by Kew lists 154 species in the Mammillaria genus. It is a member of the plant family Cactaceae with 146 genera. Those numbers could change as updates are made on POWO. The number of species in the genus and genera in the family fluctuates off and on. 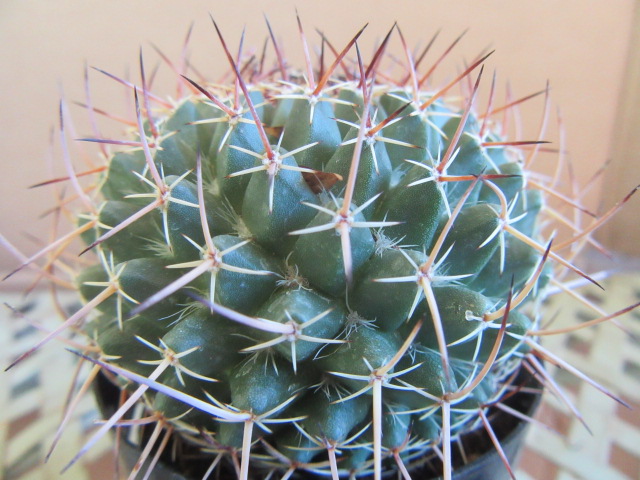 I bought this plant from Lowe’s on clearance on September 21, 2018. The Mammillaria mystax is another Owl’s Eye Cactus that divides dichotomically. The label says:

“A globular cactus, usually solitary and growing to 6” height and sometimes to 8” in diameter. Spine color is highly variable with whitish wool and bristles at axils. Rings of reddish-violet flowers appear in April and May. Native of Oaxaca, Mexico. Protect from frost. Provide bright light/sun; hardy to 20° F. Water thoroughly when soil is dry.” 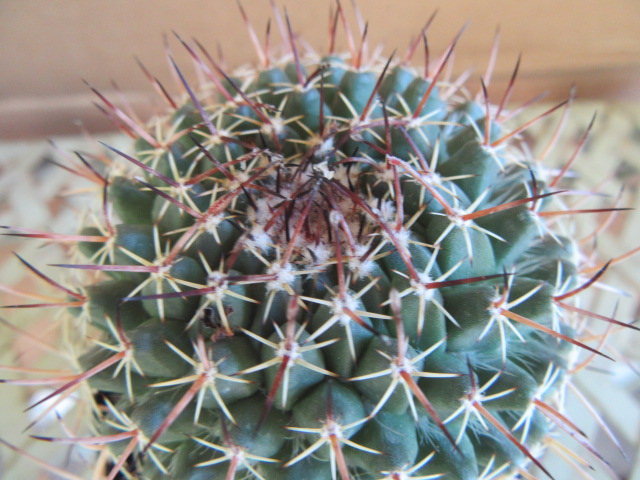 Mammillaria mystax is native to the highlands of south-central Mexico around Puebla, Guerrero, and Oaxaca at around 3,280-8,500 feet (1,000-2,600 meters) above sea level. It occurs in tropical dry deciduous forests and scrubland along with many other genera and species of cactus.

Mammillaria mystax is a neat small cactus with very pronounced pyramid-shaped tubercles. In the wild, it produces very long, entangled spines on its crown but that seldom happens in cultivation. This species divides dichotomously as well as possibly producing offsets. It will produce a ring of rose flowers with brown mid-veins in up to 3 rows. 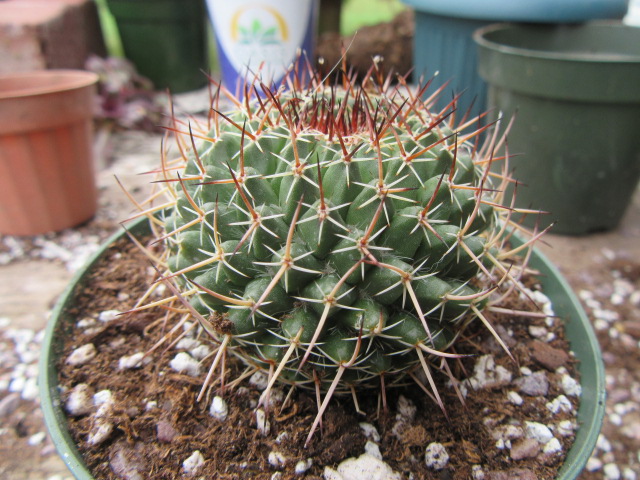 I had to move the potted plants inside for the winter on October 10 because the forecast was calling for an “F” in a few days and the nighttime temperatures were getting cooler. I usually measure the cactus and succulents when I bring them inside, but I didn’t measure this one because I measured it when I brought it home in September. 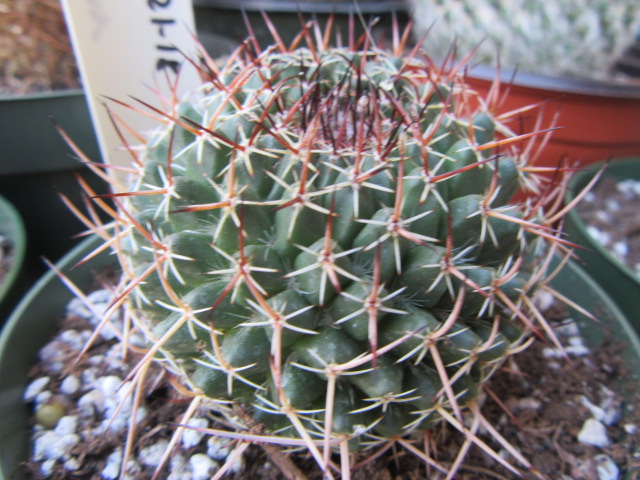 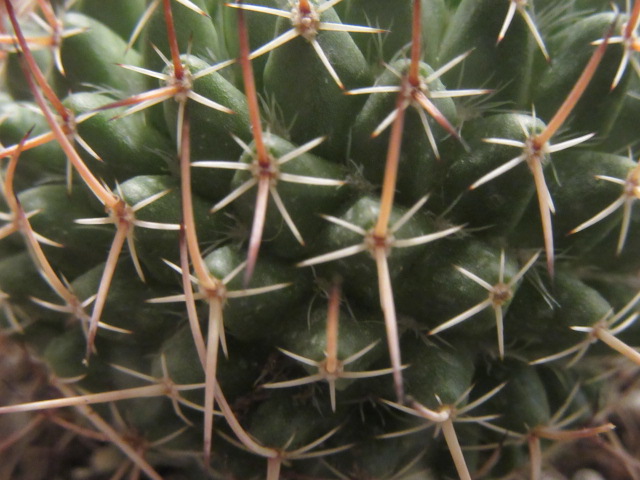 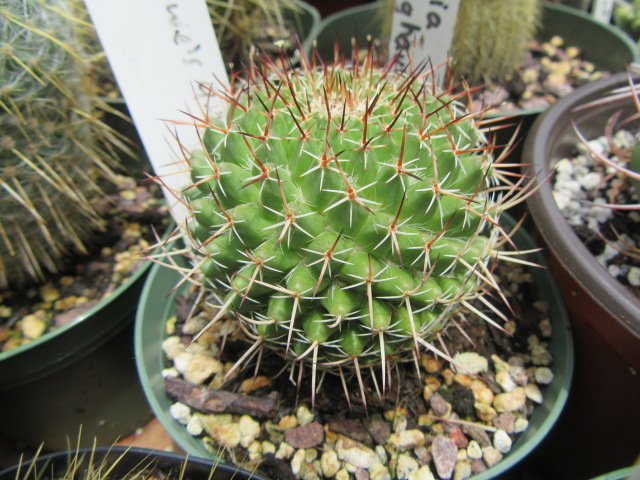 Once evening temperatures warmed up enough I moved the potted plants back outside for the summer. The cactus were moved to the back porch to receive full sun.

I was fairly busy during the summer so I didn’t take as many photos as usual. Despite a little neglect, the plants all did very well. 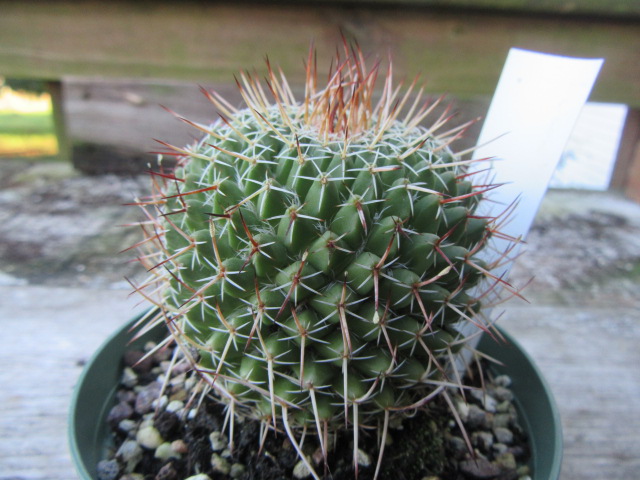 Next thing I knew I had to move the potted plants inside for the winter on October 11 because an “F” was in the forecast. I always take photos of all the plants as I move them inside and measure the cactus and some of the succulents. The Mammillaria mystax measured 2 1/4″ tall x 2 1/2″ wide (without the spines). It measured 1 3/4″ tall x 2 1/4″ wide when I brought it home on 9-21-18. 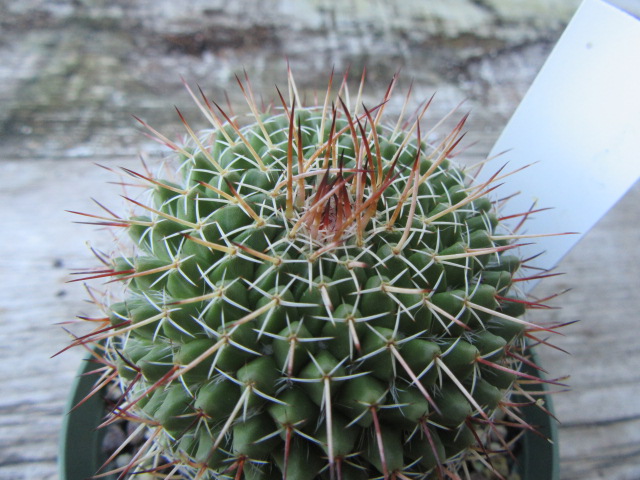 Mammillaria mystax has very prominent 4-6 angled pyramid-shaped tubercles, as many as 34 rows, lined in a spiral pattern. Areoles around the apex of the plant have a small amount of wool but appear to be absent on the rest of the areoles. The plant’s axils (the area between the tubercles) also has a small amount of wool and hair (depending on where you look).

Areoles produce 3-10 small white radial spines, some with dark tips. The central spines are a different story… Information states Mammillaria mystax can have 3-4 central spines, but sometimes they may have only one. They begin as a purplish-brown at the apex (top of the plant) but turn a grayish color (some with brown tips). With my plant, some of the smaller central spines below the midpoint are also brownish. For the most part, my plant has 4-5 radial spines and 1 central spine of varying lengths. I noticed many areoles with 2 central spines in earlier photos but they appear to have disappeared… 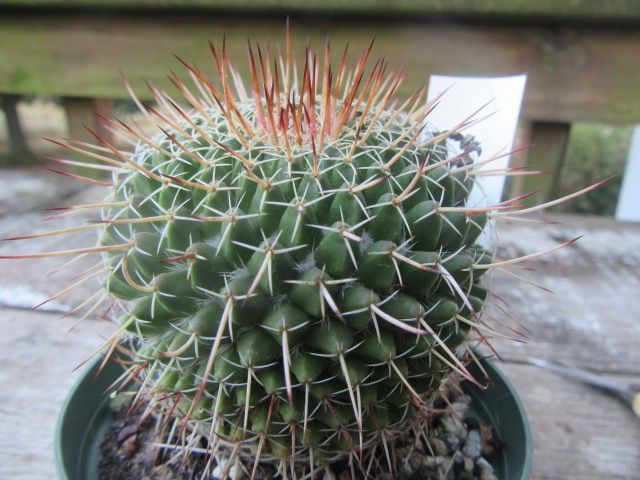 I had to bring the potted plants inside on October 15 in 2020 because an “F” was in the forecast’. As usual, I took photographs as I brought the plants inside. I always measure the cactus and some of the succulents. The Mammillaria mystax did very well over the summer and measured 2 3/4″ tall x 2 3/4″ wide at the time. That’s pretty good since it was 1 3/4″ tall x 2 1/4″ wide when I brought it home on September 21, 2018. 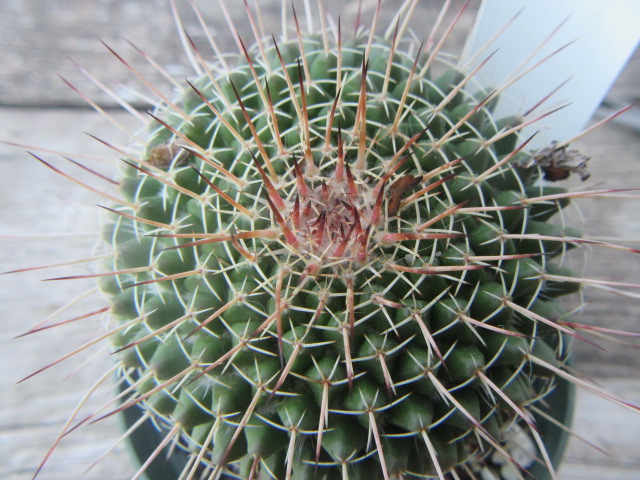 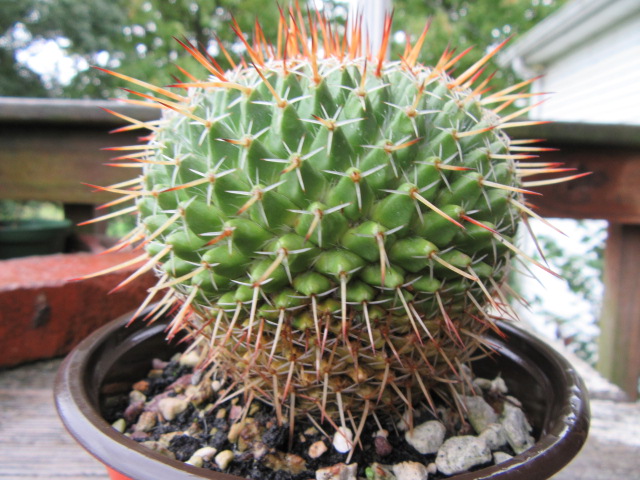 I didn’t have to move the potted plants inside for the winter until October 28 in 2021. There wasn’t a chance of “F” in the forecast until then which was quite unusual. The Mammillaria mystax did very well and grew to 3 1/8″ tall x 3 1/4″ wide.

I think a lot of growing tips online are written by people who never grew succulents and cactus. They just copy from one website and paste it to theirs. You have to sort of mimic the soil where species grow in their native habitat. For that, you almost have to go see for yourself… Typically, they grow in fairly rocky soil

When you bring your new plants home from the store, you need to check their roots and the soil to see if they are wet. If so, you may want to re-pott it right away. It is advisable to re-pot them in a better potting soil more suitable for cactus and succulents.

The Mammillaria mystax is a great cactus and I enjoy having it as a companion. It is just weird it doesn’t have a common name. I will continue adding more photos and information as time goes by. Be sure to click on the link to Llifle below for further reading.

There isn’t a whole lot of information online about the Mammillaria mystax but hopefully, someday there will be more.