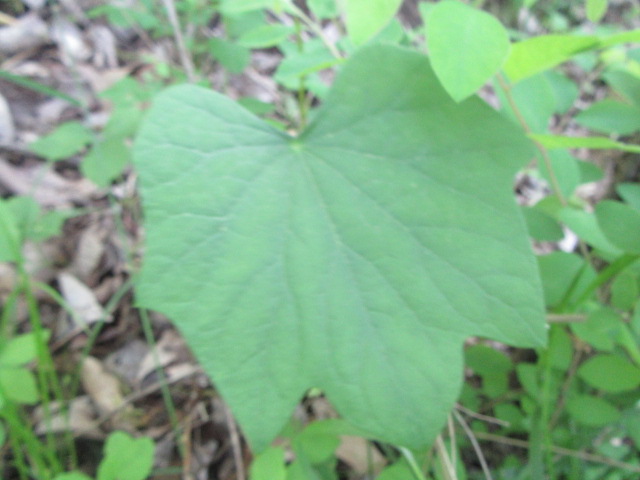 Menispermum canadense L. is the accepted scientific name for this species. The genus was described and the species was named as such by Carl von Linnaeus in the first volume of the first edition of Species Plantarum in 1753.

As of 2-22-22 when this page was last updated, Plants of the World Online by Kew lists 2 species in the Menispermum genus. It is a member of the plant family Menispermaceae with 75 genera. Those numbers could change as updates are made on POWO.

Distribution map of Menispermum canadense from Plants of the World Online. Facilitated by the Royal Botanic Gardens, Kew. Published on the Internet; http://www.plantsoftheworldonline.org/. Retrieved on April 15, 2021.

The above distribution map for Menispermum canadense is from Plants of the World Online. The map on the USDA Plants Database is the same. The species could have a broader range than what the maps show.

THERE ARE SEVERAL LINKS AT THE BOTTOM OF THE PAGE FOR FURTHER READING AND FOR A BETTER POSITIVE ID. 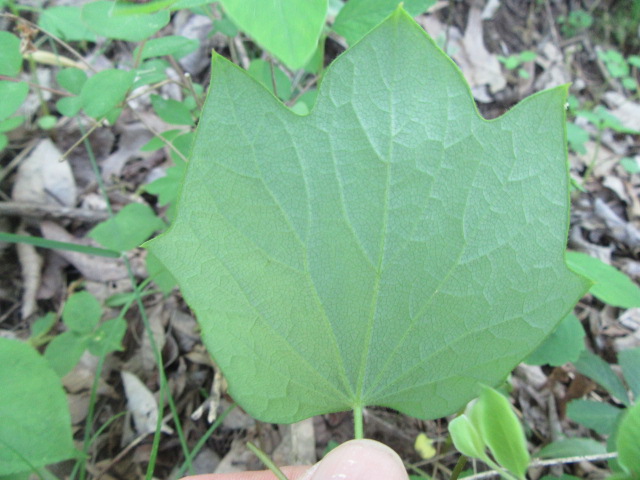 I stumbled across this somewhat interesting vine while wildflower hunting in the secluded woods on a friend’s farm. At first glance I thought it was a wild grapevine, then realized it was different. I took photos and uploaded them on iNaturalist and was able to identify the vine as Menispermum canadense, commonly known as the Moonseed. Not even in the same family as grapevines (Vitis ssp.) which are in the plant family Vitaceae.

Menispermum canadense is a perennial vine found from the midwestern United States eastward, a few provinces in Canada, and northeast Mexico. The species is similar to Vitex species (Grapevines) but are poisonous and lack tendrils and spines. Another difference is the Moonseed petioles (leaf stalks) attach the leaves a few millimeters down from the upper margins rather than at the margins as with grapevines.

Menispermum canadense can be found climbing on trees and other vegetation in woodlands, on fences, and just about anything they can climb (twirl) on. They prefer light to part shade in moist, fairly fertile soil, but are also drought tolerant. The vines can grow up to about 20’ long without tendrils to climb with. 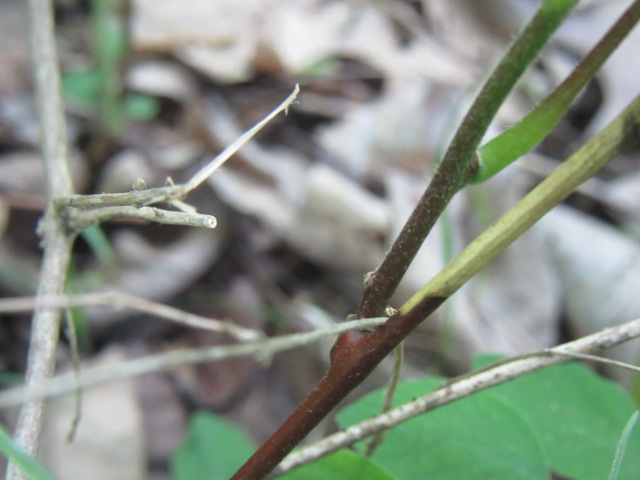 Older stems become woody and hairless with age while younger stems can be green to brownish red, and somewhat hairy, (pubescent).

The alternate leaves are quite variable in shape, but normally have 3-7 shallow lobes that can be somewhat rounded or pointed at the tip. Both the upper surface and leaf surfaces can be smooth (glabrous) to densely or sparsely hairy (pubescent). The leaves have long petioles that attach to the leaves down from the margins but NOT at the margins. This is a distinguishing feature… 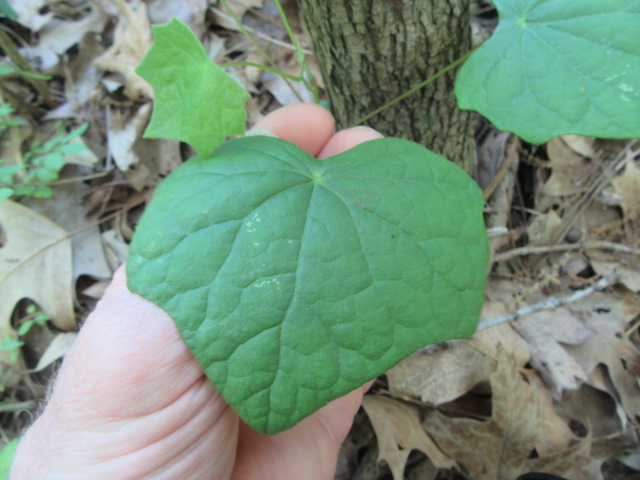 The flowers of Menispermum canadense are dioecious, meaning, in this case, vines either produce all male flowers or all female flowers. With other species, dioecious can mean individual plants produce all male and all female flowers on the same plant. The vines produce 5” or so long panicles of whitish to yellow-green flowers. Male (staminate) flowers have 4-8 petals, 4-8 sepals, and 12-24 stamens. Female (pistillate) flowers are similar but have 2-4 pistils.

Male flowers wither away while the pistils of the female flowers develop grape-like, bluish-black drupes. The drupes are poison and have rank odor and flavor. As with grapes, the drupes develop a whitish bloom, a waxy coating that can be rubbed off.

I guess I need to go back to the woods while they are flowering to get some close-ups… Actually, in 2021 I saw an “iffy” vine growing on a fence post along the south hayfield…

According to the Wikipedia article, even though the species is poisonous, the species has been used to treat skin disorders, rheumatism, and cervical cancer. It has been used as an herbal remedy as a tonic, laxative, dermatological and venereal aids, and as a diuretic…

If you are foraging and run across what appears to be wild grapes, make sure you check the vine for the presence or absence of tendrils on the vines, look at where the petioles join the leaves and notice to see if there is a rank odor of the fruit…

I have enjoyed photographing and learning about the many wildflowers growing on the farm and other areas. My farm is in Windsor, Missouri in Pettis County (Henry County is across the street and Benton and Johnson aren’t far away). I have grown over 500 different plants and identified over 200 species of wildflowers (most have pages listed on the right side of the page). I am not an expert, botanist, or horticulturalist. I just like growing, photographing, and writing about my experience. I rely on several websites for ID and a few horticulturalists I contact if I cannot figure them out. Wildflowers can be somewhat variable from location to location, so sometimes it gets a bit confusing. If you see I have made an error, please let me know so I can correct what I have written.