Stachys byzantina K.Koch is the correct and accepted scientific name for the Lambs Ear. It was named and described by Karl Heinrich Emil Koch in Linnaea in 1849.

The genus, Stachys L., was named and described as such by Carl von Linnaeus in the second volume of the first edition of Species Plantarum 1753.

Plants of the World Online by Kew lists 361 species in the Stachys genus (as of 2-23-21 when I last updated this page). It is a member of the plant family Lamiaceae with 236 genera. Those numbers could change as updates are made.

THERE ARE A FEW LINKS AT THE BOTTOMOF THE PAGE FOR FURTHER READING.

I ordered my first Lambs Ear from Bluestone Perennials when I first moved to the farm after my grandfather passed away in 1981. They grew very well and made a HUGE clump by the time I moved in 1987. My second was in 2009 when I brought a pot from Lowe’s when I was living at the mansion in Leland, Mississippi. It didn’t last very long which is why I only have one photo of it. Then, after I moved back to the family farm in 2013, a good friend of mine (Karen) gave me a couple of plants her husband (Andy) had brought home from a local garden club’s plant sale. I had gone to their house to deliver eggs and Andy wasn’t home. Karen said Andy brought her these plants and she found out they were invasive so she gave them to me. Karen, by the way, is the one who told me I should start a blog way back in 2009. So, I did and I am still at it…

I put the two Lambs Ears in the bed on the south side of the house after I had it ready. Now, since this was my first year back to the farm since 1987 I had to get used to gardening here again. The other problem was that my parents had moved in a manufactured home and put a couple of Crape Myrtle bushes on the south side of the house with very tall cannas in the middle. The Crape Myrtle were descendants of the ones I had cut down in the early 1980’s and it was like they came back to haunt me.

I always liked the Stachys byzantina for their soft, silver-white, fuzzy leaves. While they are considered invasive for some, I certainly have not had that problem. A little more would be better. They also self-sow, but mine have not even done that. Maybe I should leave more flowers on one of the clumps to see what happens.

The Lamb’s Ears are always one of the first plants to come back in the spring. This plant is fairly frost tolerant up to a point. In many parts of its recommended zones, this plant will be evergreen. In others, the plant will die back and emerge when it warms up in the spring, or even on warmer days during the winter. It is nothing to see this plant start to regrow in January if there are enough warm days. 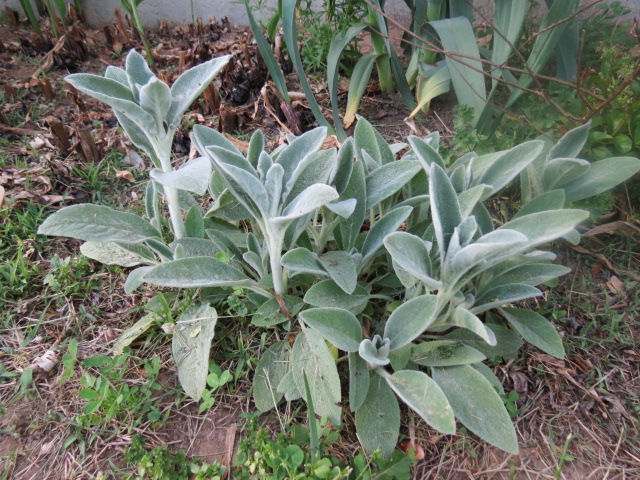 Sometimes the lower leaves will turn brown and should be removed. This can be caused from aging or from the ground being wet under the plant causing their leaves to rot. Applying mulch under and around the plant will help. 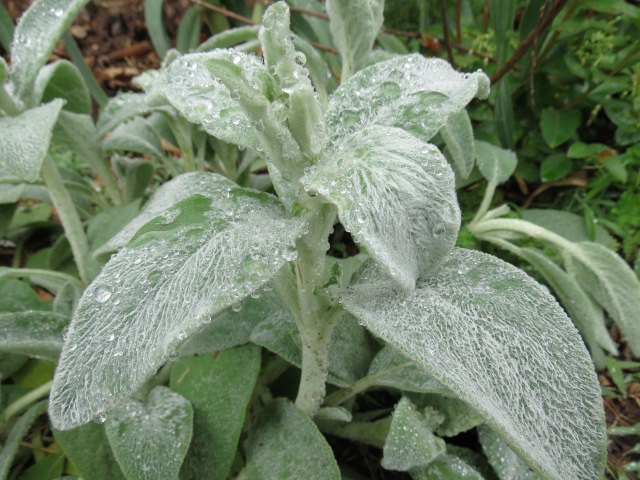 To grow this plant successfully you need very well-draining soil. They DO NOT like wet soil and will sure rot if the soil stays too damp for too long.

They really like the sun but they also do OK in lightly shaded areas. The main problem with them being in too much shade is not necessarily the light, but mainly how fast moisture dries from their leaves after a rain or watering. Too much moisture on their leaves can lead to rotting or brown spots. 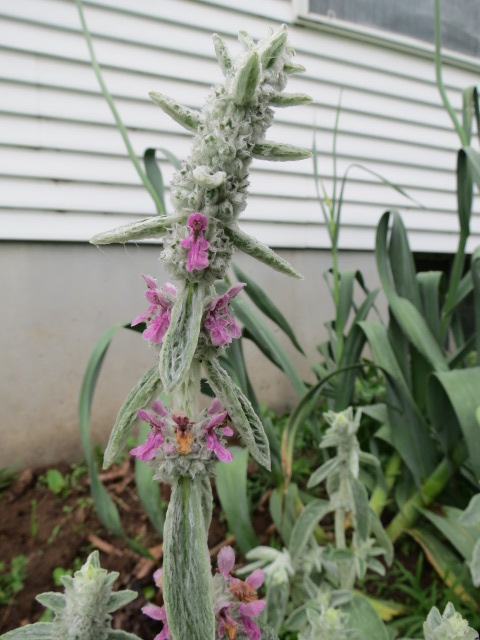 Many consider the flowers of the Lamb’s Ears not to be that showy. You need to take a closer look. This is a very complex plant! Bees, butterflies, and hummingbirds love this plant!

The Stachys byzantina is a very drought tolerant plant but does appreciate regular watering during hot summer months.

While many people love this plant for its nice, fuzzy leaves, few realize its other benefits. Believe it or not, the leaves of these plants were once used on battlefields for dressing wounds. Not only do the leaves soak up blood and help it clot faster, they have antibacterial, antiseptic, and anti-inflammatory properties. 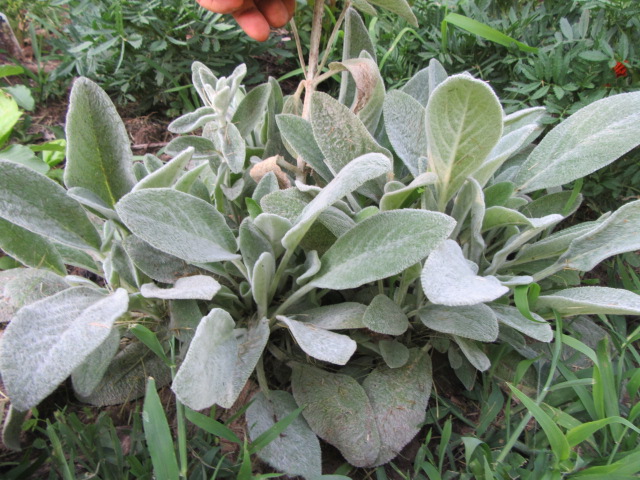 Leaves boiled in water can be used to make an infusion to treat pinkeye and styes. Tea made from this plant can be used to help treat fevers, diarrhea, sore mouth, internal bleeding, bee stings, and so on.

You can even eat the leaves in a salad or steam them. Hmmm… I should give that a try…

The above photo was taken on January 12. The early part of January was very cold, dipping down to -10° F a few times. Here the division I moved in the southeast corner bed is enjoying a few warm days.

As spring temperatures continued to warm up, many of the perennials and up and starting to leaf out. Others continue to wait for consistent warm temperatures. 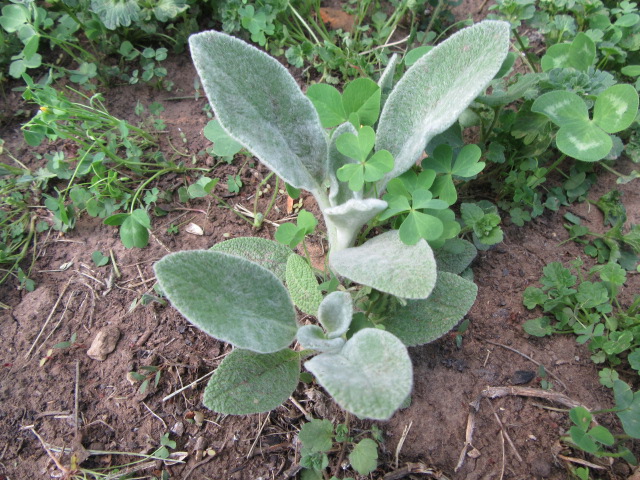 Sometimes a Lamb’s Ear pops up a little farther away from the other cluster of plants.

Looking very good on May 6.

By May 17 it was getting ready to flower. 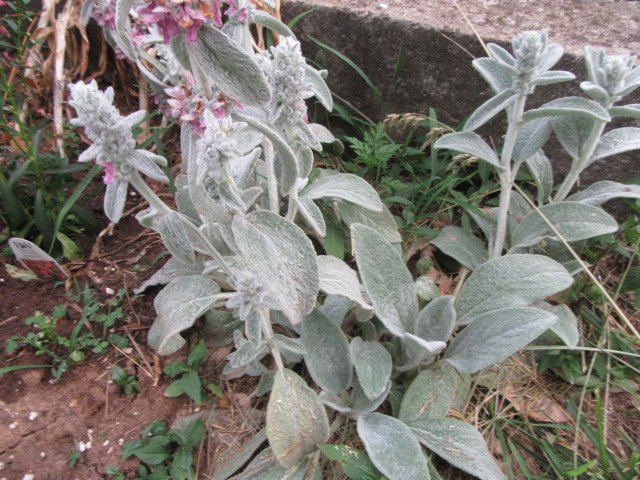 The Stachys byzantina had a very good summer in 2018… 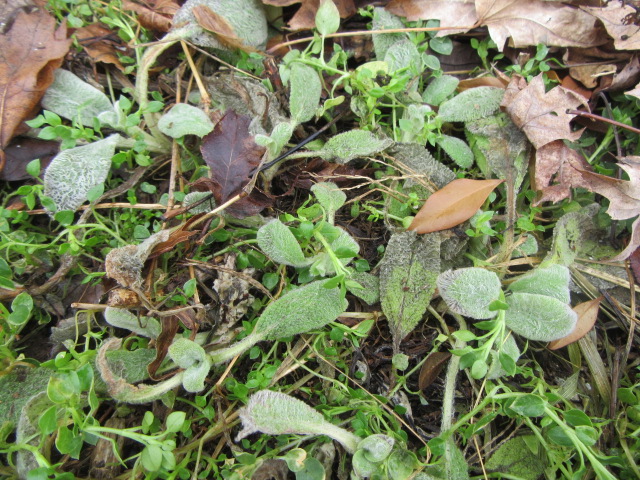 Warmer temps and sun off and on make you think spring is here. Some of the perennials are testing the waters… 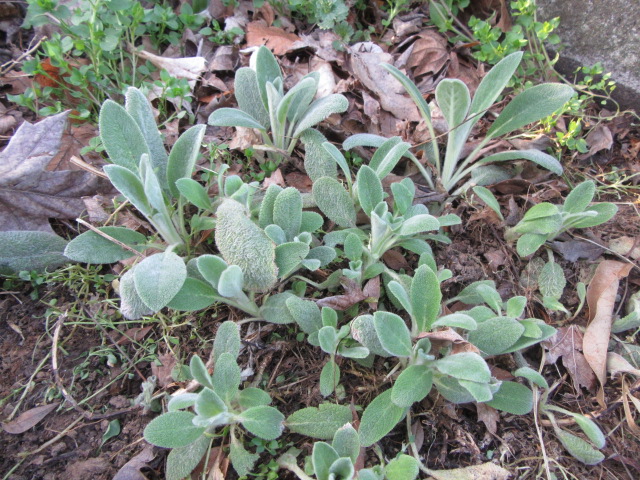 Looking GREAT by May 1 in 2019. Lingering cool temps delayed the growth of many perennials, but now that it is May, they will be taking off.

Getting in the flowering mode by May 25 in 2019 when the above photo was taken.

The Stachys byzantina continued to do well over the summer in 2019. I was fairly busy with the garden and other things in 2020 so I didn’t take many plant photos around the house. Hopefully, I can do better in 2021.

We were breezing through January and part of February with fairly nice weather. We some cold days, a little snow now and then, but it was bearable. Then the second week of February came and the temps dropped. Two weeks hoovering around zero and below zero temps with snow on the ground. Then, it was over. It was 63° F when I took the above photo on February 23 and the Lamb’s Ears were looking almost as if it were spring… GEEZ!