1991 PPA Perennial Plant of the Year

I brought my Heuchera ‘Palace Purple’ home from Lowe’s in the spring of 2014 and planted it in the shade bed with the Hosta and Ajuga reptans ‘Chocolate Chip’ I had brought with me from Mississippi. I had tried Heuchera ‘Purple Petticoats’ when I lived at the mansion in Mississippi, but it just didn’t work out…

Heuchera ‘Purple Palace’ was originally found growing in a palace in England. (Ummm, if you read the link to the Royal Botanical Garden below, you will find out the “palace” was inside the Royal Botanic Garden.) It is believed to be a Heuchera micrantha x H. villosa hybrid. It was then crossed with Heuchera americana to get the cultivar ‘Palace Purple’ that we know today.  In fact, that cultivar has been the most popular selling Heuchera for 20 years straight.

Although information suggests they do well in full sun to part shade, I have found their leaves burn in too much light. I prefer light to part shade and where I grow them they get a combination of both, depending on the time of the summer.

In mild winters, their leaves will remain evergreen but in cold winters they will completely die back. They are sensitive to frost heaving like Hosta so you may need to mulch your Heucheras AFTER the ground freezes. This will help keep the ground frozen somewhat. Continual freezing and thawing will heave their roots up losing contact with the soil. Heucheras don’t have much of a root system, so that is NOT a good idea. They don’t need much mulch, though, because they still need good drainage over the winter. 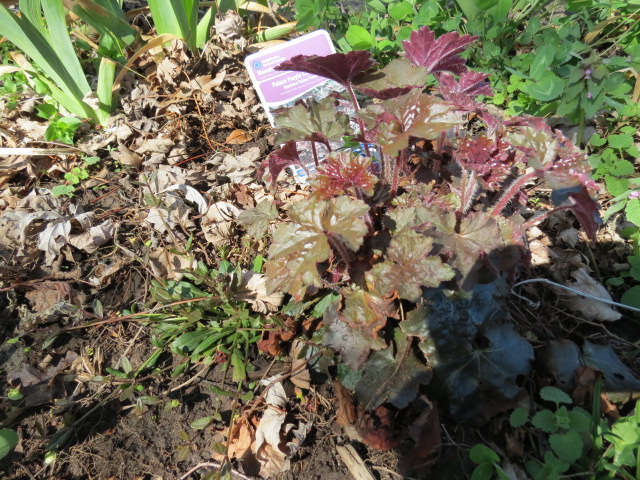 Although they do like consistently moist soil, they do not want it overly wet. They become fairly drought tolerant once established.

The Heuchera ‘Palace Purple’ certainly exceeded my expectations in 2015. 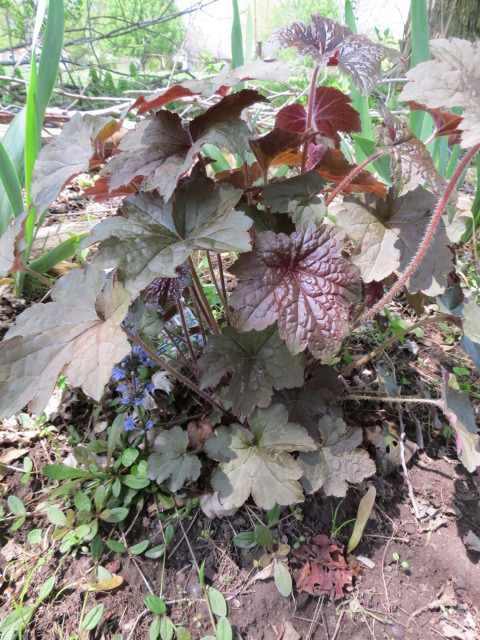 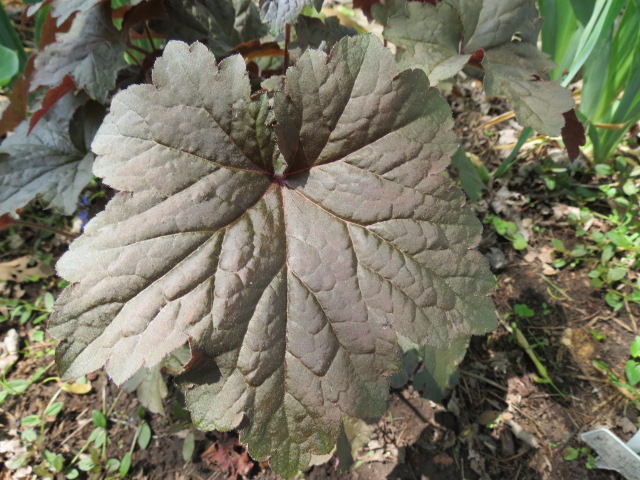 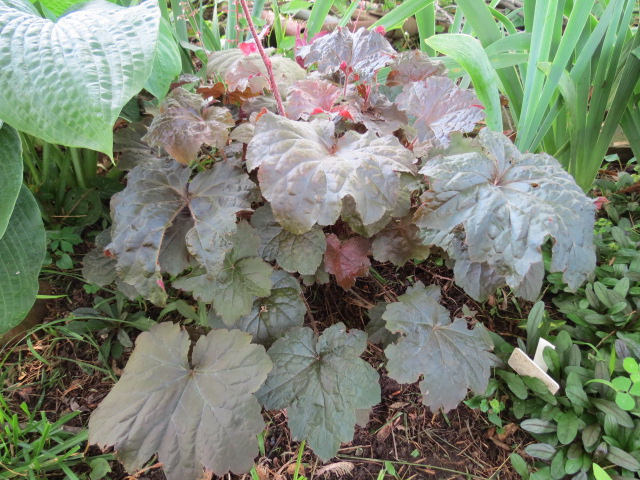 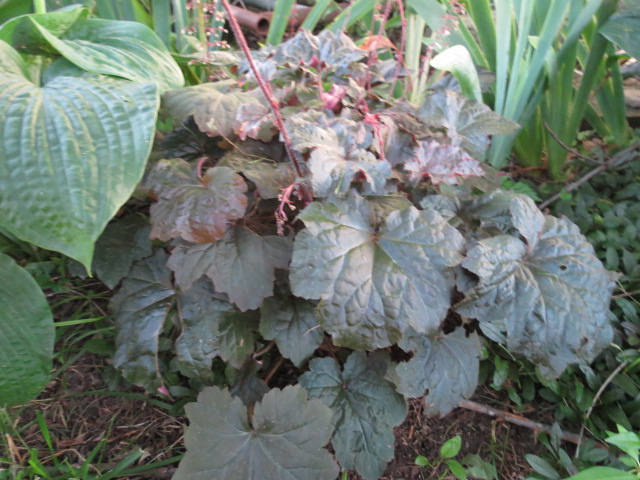 Heuchera only requires a little maintenance. Trim off dead or damaged leaves in the spring and throughout the summer. Deadhead spent flowers to keep them looking tidy.

Although the Heuchera ‘Palace Purple’ was amazing in 2015, 2016 was a different story. We had our ups and downs and I have no idea why.

I was glad it survived the winter and started growing new leaves in the spring. 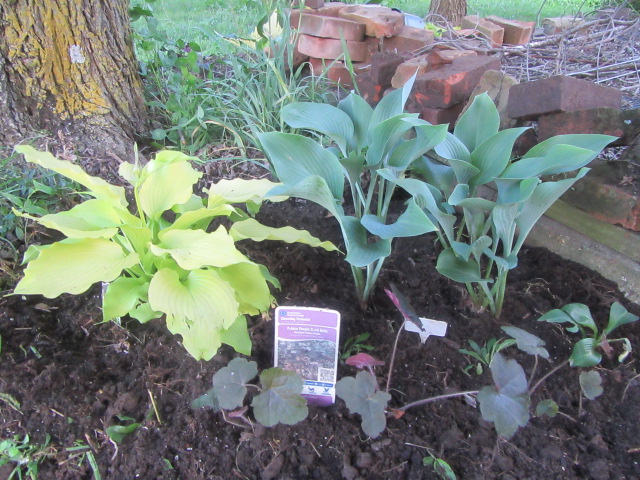 I needed to move my Hosta ‘Krossa Regal’ and I also bought a Hosta ‘Dancing Queen’. So, I dug an area on the north side of the old fish pool for the two Hosta and put the Heuchera ‘Palace Purple’ with them. The new shade bed with the new Heuchera and Hosta are around the corner.

The bricks are from an old brick sidewalk I put around grandma’s old goldfish pool in the early 1980’s. I moved to my grandparent’s farm when grandpa died in 1981. I moved in 1987 and returned in February 2013.

Cooler temps were coming and the Heuchera and Hosta were showing all the signs.

Once spring was trying to move in, the Heuchera ‘Palace Purple’ started growing new leaves. We had a very cold winter and it is always good to see new signs of life. 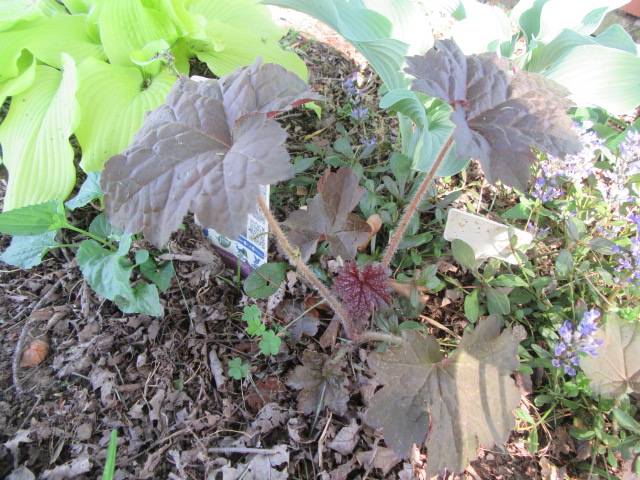 The cooler temps wanted to stick around as long as possible so everything was growing a little slow.

Some of the other Heuchera were struggling, but the ‘Palace Purple’ was doing really well.

Heuchera ‘Palace Purple’ has no problems in this location. The moles aren’t quite so bad in this spot so its roots make good soil contact.

Spring was right around the corner so I took a few photos of the perennials that have started coming up. The Heuchera normally don’t completely disappear over the winter unless it is very cold. The above photo shows the Heuchera ‘Palace Purple’ with a little new growth on March 7, 2019.

The Heuchera ‘Palace Purple is still doing well a month later on April 7. 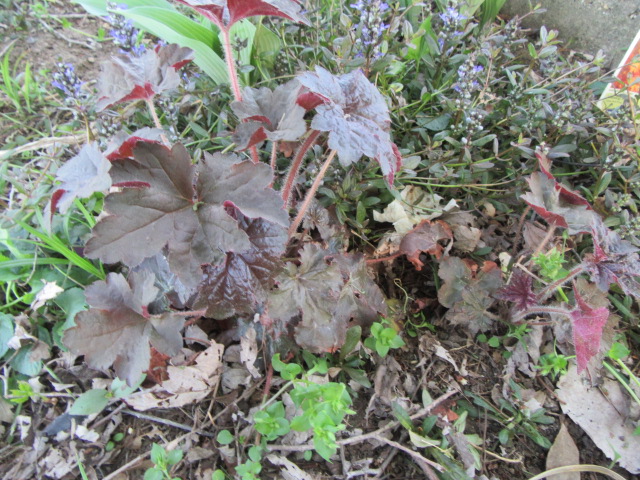 Still doing well on April 20 even though it is a little strange one is always much bigger than the other. As long as they are both growing and look healthy I am not going to complain.

Looking better every time I take photos. The bigger plant handed me a “to-do list” reminding me to keep the Virginia Creeper (lower left corner) in check.

Looking good! I pulled the Virginia Creeper up, but as you can see it is persistent.

Heuchera ‘Palace Purple’ is a bit of a late bloomer compared to the others in the collection.

August 11 was the last day I took photos of the plants in the shade bed. They had a great summer despite the Japanese Beetle invasion. It wasn’t as bad in 2019 because I had traps. I had to keep an eye on them and water a little more often. 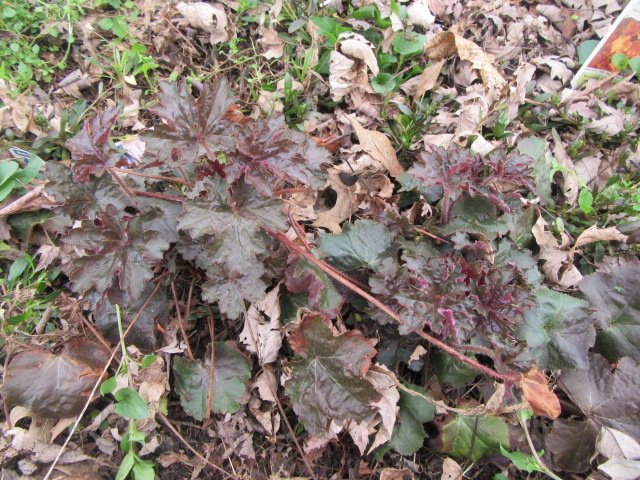 The Heuchera ‘Palace Purple’ survived the winter and was getting off to a good start when the above photo was taken on March 30, 2020. 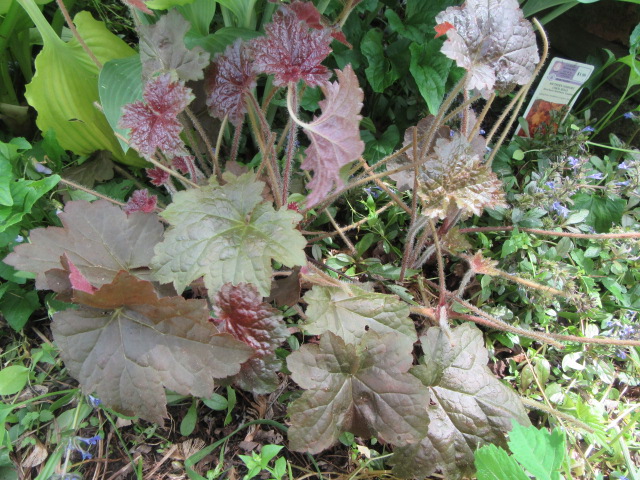 Looking great on May 17, 2020. The Heuchera did very well over 2020 and we didn’t have such an issue with Japanese Beetles. Most of the leaves stayed on the trees above the shade beds.

I will continue adding photos and information as long as I have the Heuchera ‘Palace Purple’ as a companion.

I hope you found this page useful. If you have any comments, questions, or suggestions, I would like to hear from you. If you visited this page, please leave a “Like” below. It helps us bloggers stay motivated. 🙂