Accepted Infraspecific Names (2) (Updated on 12-12-21): *Platycerium bifurcatum subsp. bifurcatum (autonym), Platycerium bifurcatum subsp. willinckii (T.Moore) Hennipman & M.C.Roos. *When infraspecific taxon are named, an autonym (“type-specimen”) is automatically generated whose description is closest to the (original) species. I am not sure how the species and the autonym can have different synonyms… The species, autonym, and subspecies have their own synonyms.

As of 12-12-21 when this page was last updated, Plants of the World Online by Kew lists 17 species in the Platycerium genus. It is a member of the plant family Polypodiaceae with 68 genera. Those numbers could change as updates are made on POWO.

I brought my Staghorn Fern home from Lowe’s in Greenville, Mississippi in 2011 while living at the mansion in Leland. I had bought one earlier but it didn’t last long and for some reason I don’t have photos unless I misplaced them. They may be somewhere in the old laptop that won’t come on. 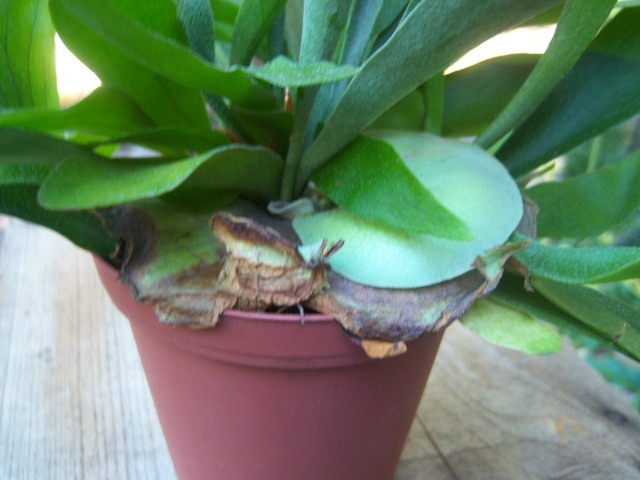 I kept my Staghorn and Elkhorn Ferns on a cypress shelf I made in the kitchen at the mansion. It received good morning sun in that location and did very well. My first one was in the butler’s pantry where it received a little sun in the afternoon. That didn’t work so well. Some information suggests wrapping the rootball with sphagnum moss and attaching it to a board. Although that would have been pretty neat, I just left mine in a pot. After a while, I transferred it to a larger pot and added plenty of organic stuff. It seemed fine with it and started growing very well.

As far as watering goes, you shouldn’t let the roots dry out completely. This is a rainforest plant, actually an epiphytic plant, that grows in trees. They get plenty of moisture in their native environment so it is a good idea to kind of sort of mimic that environment. Good luck with that, huh? Anyway, when I watered my Staghorn Fern, I usually immersed it in a bowl of rainwater. I collected and saved rainwater especially for my Staghorn and Elkhorn Ferns. I wouldn’t drink the water in Leland myself…

The Missouri Botanical Garden page (see link below) says, “Water crowns regularly, allowing the roots to dry out slightly between watering. Roots must never be allowed to dry out.” The keyword is “slightly”. 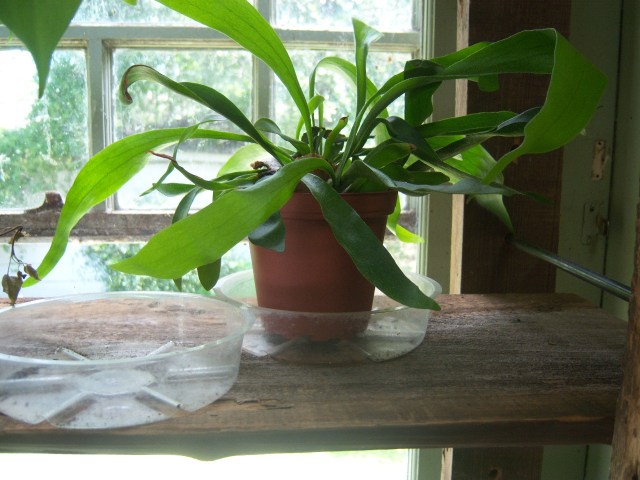 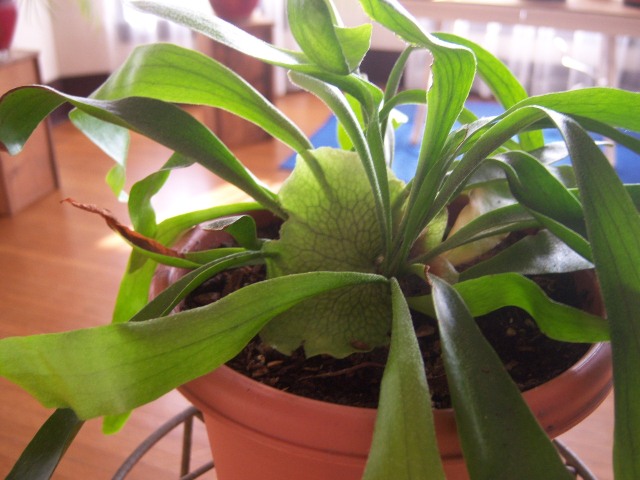 I gave my ferns to a good friend and fellow plant collector when I moved from the mansion in 2013. When I have a suitable location, I will definitely be bringing home another Platycerium bifurcatum… I REALLY LIKED THIS PLANT! I never any problems with this one and I hated to leave it behind.