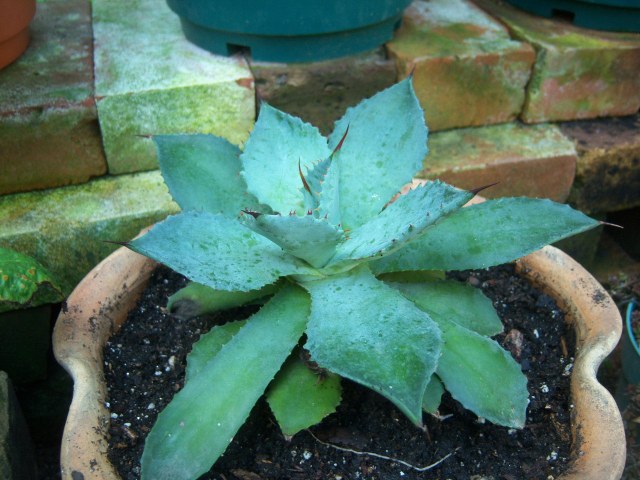 Agave potatorum Zucc. is the correct and accepted scientific name for this species of Agave. It was first documented by Joseph Gerhard Zuccarini in Nova Acta Physico in 1833. The title name is much longer, but that is the short version. There are 13 synonyms for this species.

The genus, Agave L., Was named and described as such by Carl von Linnaeus in the first edition of Species Plantarum in 1753.

Plants of the World Online lists 280 species of Agave (as of 10-8-21 when I last updated this page). Many species of other genera have been moved to the Agave genus, such as Manfreda. It is a member of the plant family Asparagaceae with 120 genera. Those numbers could change as updates are made on POWO.

I bought my Agave potatorum from Lowe’s in Greenville, Mississippi in 2012. It was pretty pitiful, being inside the plant department where it had been overwatered and in a too cool of an environment. I first called it Agave ‘Lowe’s Rescue’ because I felt I had rescued it from death by Lowe’s. I didn’t know the species name at the time because it had no label. The first thing I did when I bought it home was put it in a larger pot with fresh, dry potting soil.

It didn’t take it long to perk up at first and even grew a few offsets. I had my ups and downs with this plant for sure. It would look good, then go downhill.

The Agave potatorum is native to central-southwest Mexico at elevations between 4,000-7,000 feet in Puebla and Oaxaca in semi-arid highlands. They produce broad grey-green leaves and form rosettes 1-2 feet tall x 2-3’ wide. Some information suggests they rarely offset and they flower when they are about 10 years old. After they flower, as with most Agave, the plant dies.

The above photo is the last one taken of the Agave potatorum at the mansion in Mississippi. I sold the mansion and returned to the family farm in mid-Missouri a few days after this photo was taken.

When I moved to Missouri in February 2013, it apparently didn’t like being in a 30-degree trailer for 8 hours. It started suffering miserably. By spring, the main plant crown rotted but the 3 pups survived. They also had their ups and downs…

USEFUL INFORMATION:
Family: Asparagaceae
Zones: 9b-10b (25°-35 °F)
Light: Sun to light shade. Prefers light shade during the hotter months.
Water: This plant is a little weird… It likes plenty of water during the summer, and will actually have a growth spurt with more water. However, you MUST allow the soil to completely dry out between watering.

*Most Agave species are easy to grow in the ground where they are cold hardy and in pots where they are not. There are a lot of potting soil recipes online and many people develop their own with experience and what is readily available. Read the ingredients on the bag and always start with a base of a reliable brand name potting soil. I always use either Miracle Grow or Schultz Potting soil because I can buy it in large bags. They also offer cactus soil in smaller bags with similar ingredients. I used 2 parts potting soil with 1 part additional perlite and 1 part chicken grit. After reading that cactus and succulent enthusiasts were recommending pumice in place of perlite and grit, I decided to try it. So, in late in 2018 I purchased a bag of pumice online from General Pumice. I have been using a combination of about 50% potting soil and 50% pumice with favorable results. 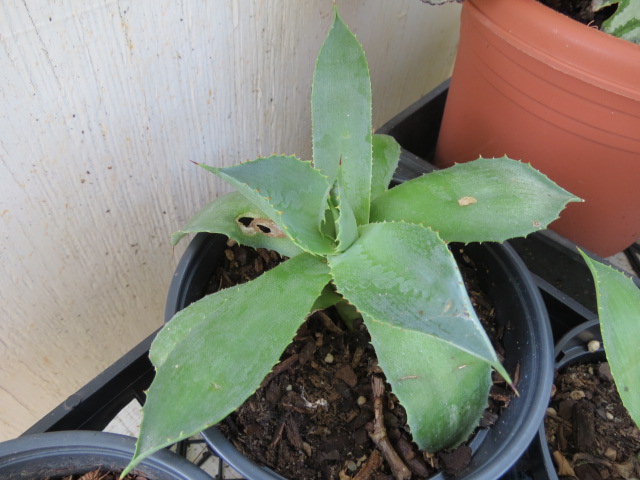 One of the three offsets did better than the other two.

The Nahuatl Indians called this plant “papalometl” which means “Butterfly Agave”. The species name, potatorum, means “potator” meaning “of the drinkers” in reference to it being used to make alcoholic beverages.

I gave up most of my plants late in the summer of 2014 so now I am rebuilding my collection. I doubt that I will be buying any more of this species… but you never know.

Some websites state that the Agave potatorum seldom offsets, but other websites say otherwise. From the photos I have seen, mine didn’t exactly look like most of them. Some photos had a compact rosette others were more open with a similar growth habit to my Agave americana ssp. protoamericana.