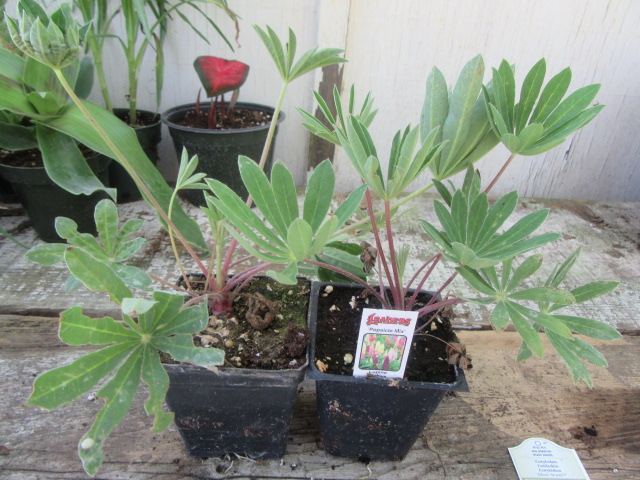 I brought my first Lupine ‘Popsicle Mix’ home from Wagler’s Greenhouse on 6-6-17 to plant in the newly rejuvenated south bed. There wasn’t anything else to go by as far as the species or hybrid name on the label. Some websites say this series is Lupinus polyphyllus, Lupinus x intermedia, or they say it was developed from the Lupinus polyphyllus species, a native of the Pacific Northwest. Undoubtedly, it is a hybrid with Lupinus polyphyllus as one of the parents.

The genus, Lupinus L., was described by Carl von Linnaeus in Species Plantarum in 1753.

As of 11-24-21 when this page was last updated, Plants of the World Online lists 612 accepted species in the Lupinus genus. The genus is a member of the plant family Fabaceae family with 773 genera. Those numbers could change as updates are made on POWO.

I planted the two Lupines in an area on the east side of the south bed all the while wondering if it was a good idea. I have this idea that all new plants I try should not be grown on the south side of the house because it gets so hot there.

Lupine Popsicle Series is a mixed seed strain that includes a wide range colors and bi-colors. They are about a foot shorter and flower about 2 weeks earlier than the Russell Hybrids. Lupinus polyphyllus is one of the parents used to develop the Russell Hybrids (Lupinus x regalis).

One of the plants did OK but the other one died…

I went back out to Wagler’s for some reason, maybe I needed more plants or maybe I took her some. It is so good to have somewhere to take extra Alocasia… Anyway, I told her about the one dying and the Lobelia having bugs and she gave me a couple more Lupines.

I have grown a lot of plants that I am familiar with but I always like experimenting with new plants. When I am out plant browsing and I find something I want to try I don’t always check the labels. The most important thing is that they have one for ID. Then when I do research for the blog page, like this one, I find out what I should have learned beforehand. Well, today is February 17, 2017, which is over eight months since I bought my first Lupines. Here’s what I have learned, though…

Lupines prefer warm days and cool nights in sun to lightly shaded areas. They prefer rich soil with organic matter that is slightly acidic with good drainage. Mulching is a good idea to keep their roots cooler in the summer and also protects them over the winter. They do not like hot dry summers, so growing them in a cooler climate is best… Hmm…

Deadheading your Lupines is essential to keep them flowering longer. Not doing so will only stop them from blooming. It also keeps your beds looking more neat and tidy.

Apparently, Lupines have deep taproots and don’t like to be disturbed once they get going. So, with that in mind, it is best to just let them alone and do as they please and form a nice colony.

Funny, all this information tells me that I shouldn’t plant Lupines here unless I plant them on the east side of the house. That would mean removing all this old, crappy fill dirt and replacing it with “The Good Stuff”, which is decomposed cow manure and hay from where the cows are fed over past winters. I have plenty of that, but don’t I want to use the energy I have been saving…

I hope you enjoyed this page and maybe found it useful. If you have any comments, questions or suggestions, I would like to hear from you. Please click on “like” if you visited this page. It helps us bloggers stay motivated. 🙂 You can check out the links below for further reading. Plants of the World Online by Kew is the most up-to-date database.