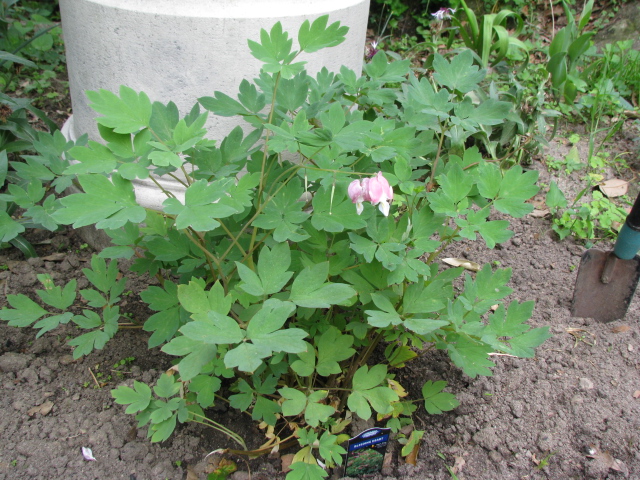 The genus, Lamprocapnos Endl., was named and described as such by Stephan Friedrich Ladislaus Endlicher in General Plantarum Supplementum in 1850.

As of 1-5-23 when this page was last updated, Plants of the World Online lists only one species in the Lamprocapnos genus. It is a member of the plant family Papaveraceae with 45 genera. Those numbers could change as updates are made.

I bought my Bleeding Heart from Lowe’s in Greenville, Mississippi in 2009 while living at the mansion in Leland. I transplanted it in a bed I made by the old goldfish pool in the backyard then moved it to a new bed close to the entrance of the den. I moved a concrete slab for a fountain to that spot in 2010 and missed covering up the Bleeding Heart by an inch. I didn’t realize it until it returned in the spring of 2011. I don’t remember if it returned in 2012 or not. I know I took more photos but somehow there is only one in this plant’s photo folder. The other photos must be on the old laptop I can’t get to come on.

This species of Bleeding Heart had had several names using Fumaria spectabilis L. as the basionym:

Fumaria spectabilis L.-Named and described by Carl von Linnaeus in Species Plantarum in 1753. The genus, Fumaria Tourn. ex. L. was described by Linnaeus in Species Plantarum in 1753 but he didn’t originally name the genus. Joseph Pitton de Tournefort named the genus as he did many before Linnaeus published their names in 1753. Mr. Linnasus gave him the credit for first naming and describing the genus. The Fumaria genus is still an accepted genus which includes 53 accepted species.

Diclytra spectabilis (L.) DC.-Named and described by Augustin Pyramus de Candolle in Regni Vegetabilis Systema Naturale in 1821. The genus, Diclytra Borkh., was named and described by Moritz (Moriz) Balthasar Borkhausen in Archiv für die Botanik in 1797. This genus is now a synonym of Dicentra.

Dielytra spectabilis (L.) DC.-Named and described by Augustin Pyramus de Candolle in Regni Vegetabilis Systema Naturale in 1821. He named and described the same plant with two different names in this publication. The genus, Dielytra Cham. & Schltdl., was named and described by Ludolf Karl Adelbert von Chamisso and Diederich Franz Leonhard von Schlechtendal in Linnaea in 1826. This genus is now a synonym of Dicentra.

Dielytra spectabilis (L.) G.Don-Named and described by George Don in A General History of the Dichlamydeous Plants in 1831. Mr. Don documented this plant using the name given by Mr. Candolle in 1821 using his own name. Hmmm…

Dicentra spectabilis (L.) Lem.-Named and described by (Antoine) Charles Lemaire in Flora des Serres in 1847. The genus, Dicentra Barkh. ex Bernh., was named and described by Johann Jakob Bernhardi in Linnaea in 1833. Barkh. named the genus first but was not accepted. Plants of the World Online currently lists 8 accepted species in this genus although Dicentra spectabilis is now a synonym of Lamprocapnos spectabilis.

That’s weird… The Lamprocapnos genus was named in 1850 but this species wasn’t in this genus until 1997 after it was put in and out of other genera for so many years. Oh, yeah, now it is the ONLY species in the genus!

WHY IS IT IMPORTANT TO KNOW YOUR BLEEDING HEART GENUS AND SPECIES?

It is very interesting how plant names change for one reason or another and it can be somewhat confusing for a gardener. Well, maybe not, because “normal” gardeners may not even pay any attention and just know this plant as a Bleeding Heart. BUT not all Bleeding Hearts are the same and you really need to understand the difference or you may wonder where your plant went after it flowers…

Dicentra formosa, commonly known as the Western Bleeding Heart, has ferny leaves and grows up to 12” tall and gradually forms a clump up to 36” wide. Perennial in USDA Zones 4a-8b.

Dicentra eximia, commonly known as the Fern Leaf or Fringed Bleeding Heart, is native to the Eastern United States. They grow approximately 30” tall and form clumps about as wide.

I haven’t tried any Bleeding Hearts here on the farm in west-central Missouri yet but they are on my wishlist. Never know what I will find…