Espostoa melanostele subsp. nana (F.Ritter) G.J.Charles is an accepted infraspecific name for this species. It was described as such by Graham Charles in Cactaceae Systematics Initiatives in 2002. It was first named and described as a separate species, Espostoa nana F.Ritter by Friedrich Ritter in Taxon in 1964.

The species has yellow-brown wool while the subspecies are white to pale yellow.

The genus, Espostoa Britton & Rose, was named and described as such by Nathaniel Lord Britton and Joseph Nelson Rose in Cactaceae in 1920.

As of 11-7-21 when this page was last updated, Plants of the World Online by Kew lists 11 species in the Espostoa genus. It is a member of the plant family Cactaceae with 146 genera. Those numbers could change as updates are made on POWO.

I bought my Espostoa melanostele from Wal-Mart on February 1, 2016. I had gone there a few days before I bought this cactus and many others. They were soaking wet from being watered and STILL in the plastic sleeves from shipping AND the area was very cool! I mentioned this “situation” to an employee and he looked at me like, “huh?” He absolutely paid no attention and they were STILL in their sleeves, standing in water when I went back and bought several plants.

“Espostoa melanostele is a columnar cactus with dense white hair and golden spines. In time, it will form a branched tree-like column to 7 feet in height. Native to mountainous Peru at elevations to 4,000 to 7,000 feet. Protect from frost and extreme heat.” 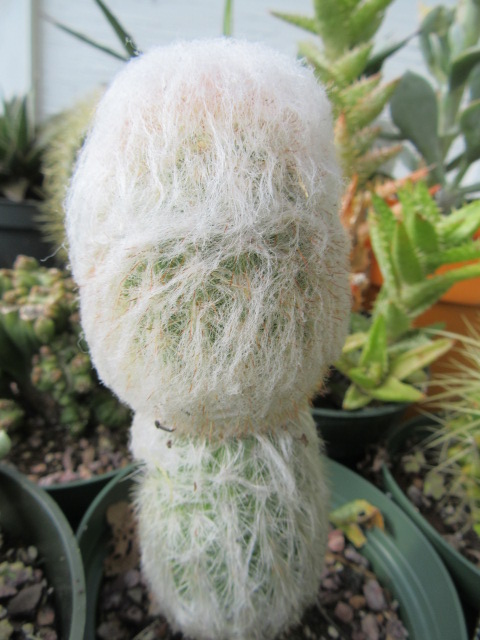 When I brought my potted plants inside for the winter on October 17, 2017, and put them in the basement before moving them upstairs. I took their photos and measured them to check their progress. Some cactus grow so slow you have to measure them from time to time to see that they are growing. When I brought this cactus home on February 1 (2016) it was 2 3/4″ tall and this time it measured 5 3/8″ tall… It grew more than any of the others. 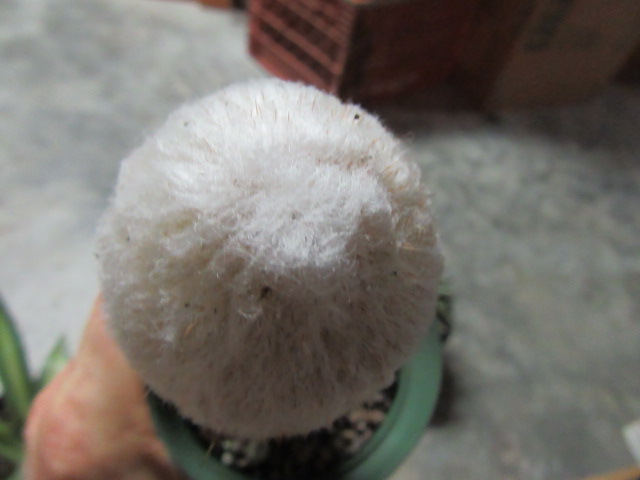 Some cactus look really neat from the top…

The cactus are all doing well inside for the winter when the above photo was taken on January 18. 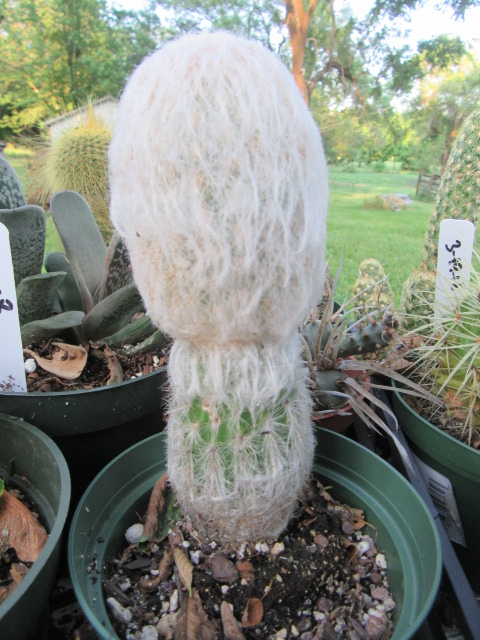 We made it through the winter now all the potted plants are back outside for the summer.

The Espostoa melanostele subs. nana is doing well this summer and has grown another 3/8″ to 6″ tall. I moved the cactus and succulents (and most of the potted plants) to the back and front porch) on July 4 (2018) because of a Japanese Beetle invasion.

November 29 was a nice spring-like day, so I took the cactus to the back porch for a photoshoot. I was working on a post to show the difference between the cactus in my collection. Later on that evening when I was labeling the photos, I noticed I had forgotten to take a photo of the Espostoa melanostele so I had to do it in the dining room.

Under all that hair is a columnar cactus with numerous areoles with around 30 short radial spines each! While it may look soft to the touch, there are also many very thin central spines so you still need to handle with care. If you noticed in the first photo, the upper of this cactus was like a little tuft of hair when I first brought it home 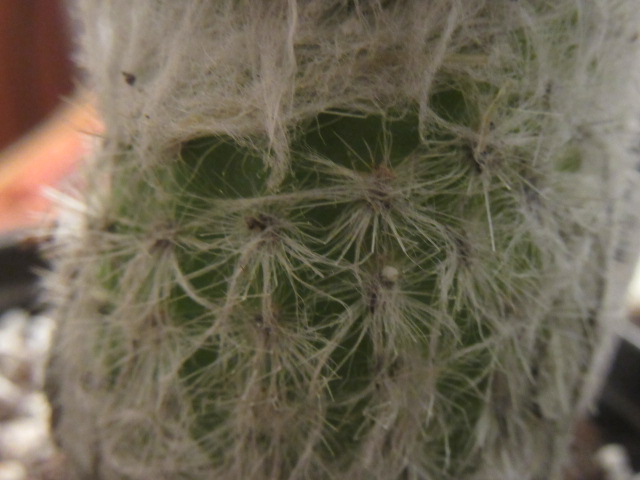 When I read the areoles of the Espostoa melanostele subsp. nana had that many spines I had to go get it and see for myself. I looked at the lower part of the cactus where there wasn’t as much hair. WOW!

The cactus are back outside on the back porch for the summer. 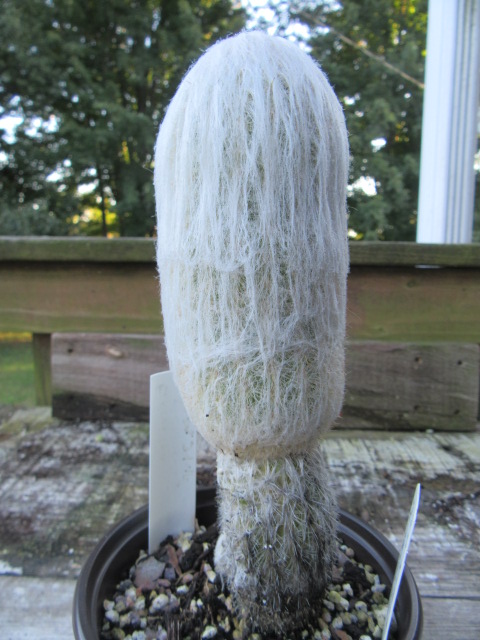 The Espostoa melanostele subsp. nana made it through the summer just fine. On October 11 I had to move the plants inside because an “F” was in the forecast. As always, I took photos and measured the cactus before bringing them inside. The Espostoa melanostele subsp. nana measured 7 1/4″ tall x 2 3/8″ wide. That is an inch taller than last October and 1/4″ wider. That is very good considering it was 2 3/4” tall x 1 3/4” wide when I brought it home in February 2016.

I had to move the plants inside for the winter in 2020 on October 15 because an “F” was in the forecast. As always I photograph and measure the cactus and succulents as I bring them inside. The Espostoa melanostele subsp. nana measured 9″ tall x 2 1/2″ wide at the time. It’s amazing how much this cactus has grown since I brought it home in January 2016. 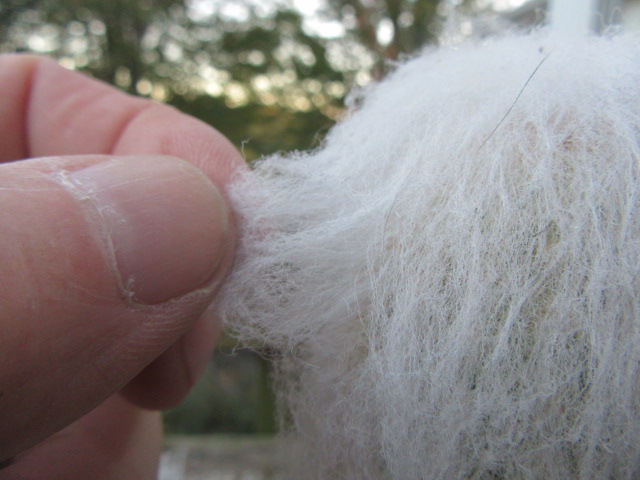 Warm temps lasted a while longer in 2021 so I didn’t have to bring the potted plants inside until October 28. The Espostoa melanostele subsp. nana seems to have shrunk 1/2″ to 8 1/2″ and is still 2 1/2″ wide. Well, that’s OK since it seems perfectly happy and healthy. I fgured with all the rain we had before I moved the plants in it may have grown more…

Espostoa melanostele produces white flowers in late spring through early summer and edible fruit about the size of a grape.

Wikipedia says, “Horticultural collection and the fact that the plant is slow-growing contribute to the fact that the plant is endangered.” Other sources say it is widespread in Peru and can grow up to 7” per year if properly fed and watered during the growing period. Ummm, that’s pretty darn good for a cactus! The IUCN Red List does not list them as a threatened species let alone endangered.

They grow their best when acclimated to full sun. If you grow your Espostoa melanostele inside over the winter, you will need to gradually introduce it to more sun.

Espostoa melanostele offsets readily and needs a lot of space to grow… Hmmm. Wonder when this happens? They can branch out from the base when about 30-36” tall. Let me see… At 7” per year that means it will take at least 4 years before it “may” branch out. GEEZ! Mine has grown 6 1/4″ taller since I brought it home on February 1, 2016.

Llifle says this cactus does better with a little more water than most cactus. Water thoroughly but allow the soil to dry between waterings.

I hope you found this age useful. If you have any comments, questions or suggestions, I would like to hear from you. Please click on “Like” below if you have read this page. It helps us bloggers stay motivated. 🙂 You can click on the links below for further information. Links will take you directly to the information about this plant. Some photographs show plants that have more hair than others…