Mammillaria decipiens Scheidw. is the correct and accepted scientific name for this cactus. It was named and described by Michael Joseph François Scheidweiler in Bulletins de l’Académie Royale des Sciences et Belles in 1839.

The genus, Mammillaria Haw., was named and described by Adrian Hardy Haworth in Synopsis Plantarum Succulentarum in 1812. According to Plants of the World Online by Kew, there are 162 accepted species in the Mammillaria genus as of when I am updating this page on 12-23-19. Those numbers are likely to change

According to “people who know” anyone can use whatever name they choose as long as its description was validly published. Mammillaria decipiens subsp. camptotricha (Dams) D.R.Hunt is a validly published name. I believe someday it will once again be an accepted infraspecific name of the species. I “think”, although not positive, the plant in my collection could be Mammillaria decipiens subsp. camptotricha. But, since that name is now a synonym and I am not 100% sure, I suppose I will stick with the species name. At least I know that is correct.

I bought this cactus from Wal-Mart on 3-19-18. It is a very interesting cactus. It’s like the main plant with maybe 5 smaller ones growing on one side. The cluster measures 1 1/2” tall x 3” wide. It has completely filled this 2 3/4” diameter x 2 1/4” tall pot, which is bulging. It has long white radial spines that grow sideways from the tubercles and brown central spines that stick out like stiff hair. Cactus that have protruding tubercles like this one are often called nipple cactus. OUCH!

USEFUL INFORMATION:
Family: Cactaceae
Origin: San Luis Potosi, Guanajuato, and Queretaro, Mexico. Eastern Mexico
Zones: USDA Zones 10a-11 (30-40° F)
Size:
*Light: Light to part shade. Mine has been on the back porch in full sun during the summer and has done very well.
**Soil: Fast-draining. Potting soil amended with pumice or perlite and chicken grit. Sources say to avoid the use of peat or other humus sources. GEEZ!
***Water: Average during the summer, barely in winter.

I think a lot of growing tips online are written by people who never grew succulents and cactus. They just copy from one website and paste it to theirs. You have to sort of mimic the soil where species grow in their native habitat. For that, you almost have to go see for yourself… Typically, they grow in fairly rocky soil

Information online says this cactus is a freely clustering species that builds up into a dense cluster of stems. It also says they do better than most species in lower levels of light but still prefers bright light or morning sun. 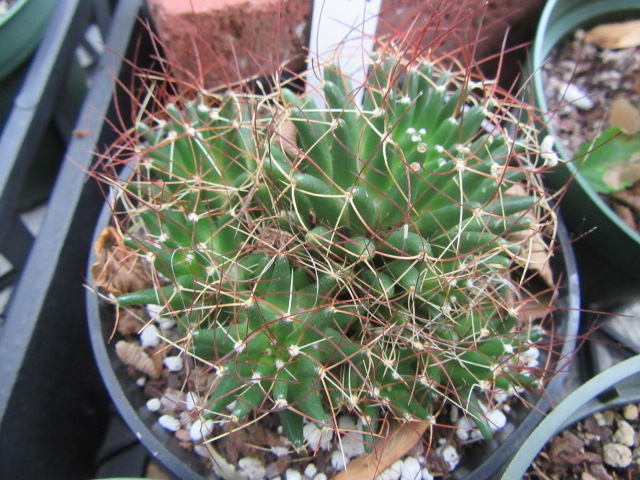 Once warmer temperatures came I moved the plants back outside. I had put the Mammillaria decipiens in a larger pot earlier since the sides were bulging. 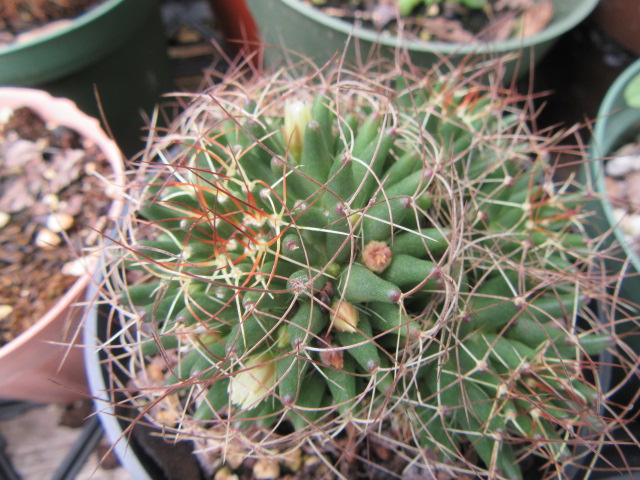 I was happy to see buds on the Mammillaria decipiens on June 24. I was even happier when I saw they weren’t going to be pink. 🙂 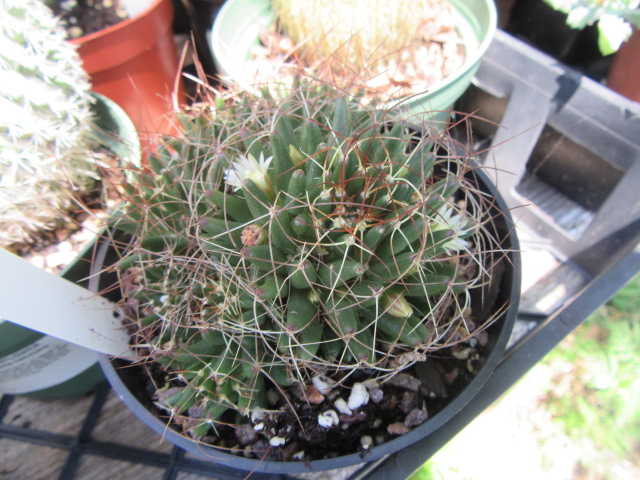 Preferred soil for cactus can sometimes be hard to understand. Llifle says this species “likes very porous mineral substratum and avoid the use of peat or other humus sources in the potting mixture.” GEEZ! What is that supposed to mean? Try finding a good potting soil without peat… There are many “recipes” online and I suppose most cactus and succulent enthusiasts do a lot of experimenting. I have been using 2 parts Miracle Grow or Schultz Potting Soil with 1 part perlite and 1 part chicken grit for many years. I can buy it in larger bags and it has timed-release fertilizer. I tried using other brands in the past but I didn’t like the results. Cactus and succulent enthusiasts do not recommend using peat-based products because. Most cactus collectors on the Facebook Group called Succulent Infatuation now recommend using pumice instead of perlite now. So, I ordered a bag of pumice from General Pumice.

Mammillaria decipiens is native to San Luis Potosi, Guanajuato, and Queretaro in Mexico where they grow at an altitude between around 5,085 to almost 8,000 feet above sea level (1550-2150 meters).

In the wild, they can be found growing in canyons and on rocky hills usually in volcanic soil. They grow under bushes among other plant species that like the same conditions.

The flowers closed up in the late afternoon/early evening and kind of look like little tulips.

The Mammillaria decipiens has certainly been strutting its stuff with all the flowers. I am glad the flowers aren’t pink…

I measured the cactus and succulents when I brought my potted plants inside for the winter on October 10. I always measure my cactus at least once a year. The cluster of Mammillaria decipiens measured 1 5/8″ tall x 3 3/4″ wide. It was 1 1/2” tall x 3” wide when I brought it home on March 19.

November 29 was a very nice spring-like day so I took the cactus outside for a photoshoot. I was making a post about the differences between the cactus species in my collection.

Mammillaria decipiens subsp. camptotricha has very prominent tubercles and long spines which cover the entire plant (on more mature specimens). The species and other subspecies do not have these long radial spines, and this one in particular usually lack central spines. As you can clearly see, my plant has long radial spines with no central spines, and, nice nipples. Sorry, I mean tubercles. 🙂 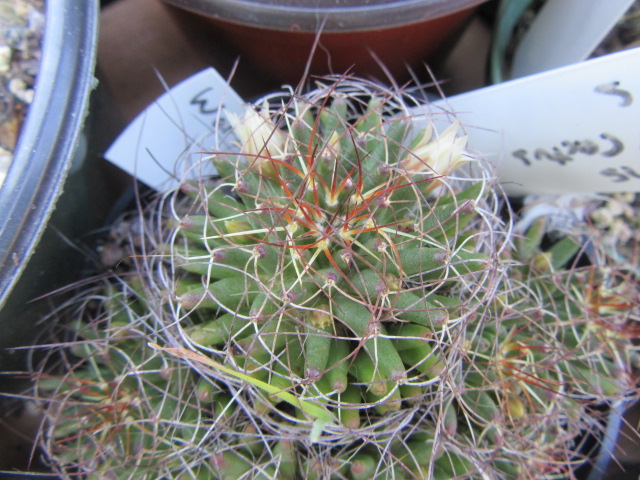 When the temps warmed up enough in May I moved the potted plants outside for the summer. It is already flowering… I put the Mammillaria decipiens on the back porch in full sun… Ummm… The recommendation is light to part shade.

Most of the other Mammillaria bloom after I move them back inside for the winter but this plant flowers in the summer. 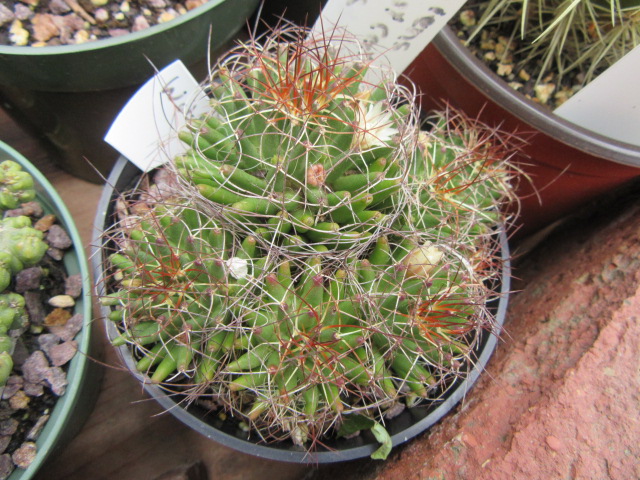 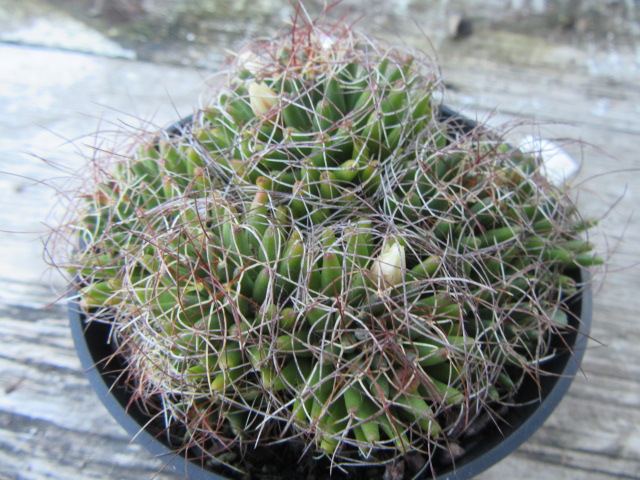 I had to move the potted plants inside for the winter on October 11 because an “F” was in the forecast. I always take photos of all the plants and measure the cactus and some of the succulents as I move them inside. The clump of Mammillaria decipiens measured 1 1/2″ tall x 4″ wide. Remember, it was only 3″ wide when I brought it home in March 2018. It did very well in full sun…

This photo shows how long the radial spines are and how they weave across the plant. The spines of Mammillaria decipiens subsp. camptotricha are longer than the species which leads me to believe this is the subspecies… It also has 4-5 radial spines per tubercle where the species has 5-11. Maybe someday the subspecies will be accepted once again.

It would be hard to say without seeing different plants of this species, especially in the wild. Anyone up for a trip?

I put the Mammillaria decipiens in a larger pot on November 11 along with several other cactus. I kind of like repotting in the fall so their soil will be nice and loose over the winter. I mixed about half potting soil with half pumice. This one might actually have preferred to have some chicken grit as well…

I had to move the potted plants inside for the winter on October 15 (2020) because an “F” was in the forecast. As always, I took photographs and measurements as I brought the plants inside. The Mammillaria decipiens did very well over the summer and the tallest measured 1 3/4″ tall and the cluster of plants measured 4 1/4″ wide. That is 1/4″ taller x 1/4″ wider than last October 11.