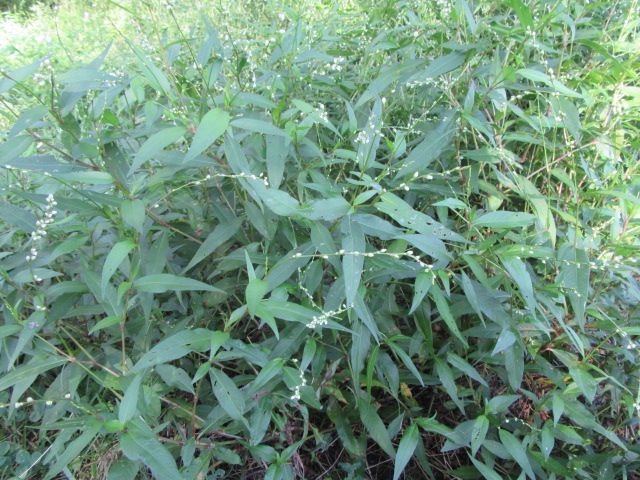 Persicaria punctata (Dotted Smartweed) on 8-28-19, #616-7. The above photo was taken of a colony behind the chicken house.

Persicaria punctata (Elliott) Small is the correct and accepted scientific name for the Dotted Smartweed. It was named and described as such by John Kunkel Small in Flora of the Southeastern United States in 1903. It was first named and described as Polygonum punctatum by Stephen Elliott in A Sketch of the Botany of South Carolina and Georgia in 1817.

The genus, Persicaria (L.) Mill., was named and described by Philip Miller in the fourth edition of Gardener’s Dictionary in 1754. According to Plants of the World Online by Kew, there are currently 129 accepted species in the genus Persicaria (as of when I am writing this page on 10-5-19). Those numbers will probably change. 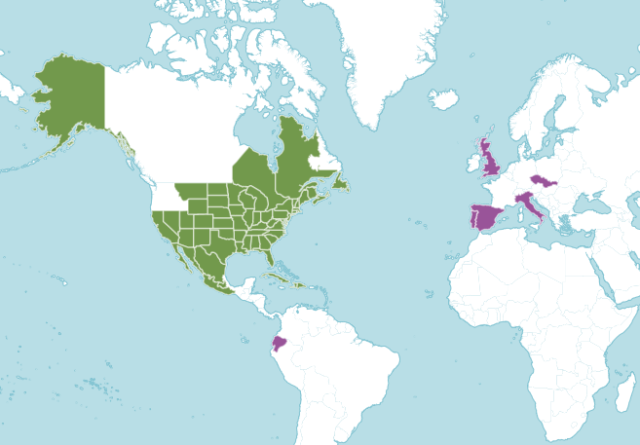 Distribution map of Persicaria pensylvanica from Plants of the World Online. Facilitated by the Royal Botanic Gardens, Kew. Published on the internet at http://www.plantsoftheworldonline.org/. Retrieved on October 5, 2019. The green is for where it is native and purple is where it has been introduced.

Research has shown that Persicaria punctata is an allotetraploid species that originated from hybridization between Persicaria hydropiper and probably Persicaria hirsuta or Persicaria setacea.

Persicaria punctata (Dotted Smartweed) is one of two of the most abundant of seven Persicaria species growing on the farm. The other is Persicaria longiseta (Oriental Lady’s Thumb). Persicaria punctata is very similar to Persicaria hydropiper and can be very hard to tell them apart. I have both species here so I was able to get them straight. The main differences are the stem color (which is variable with P. hydropiper), the length of their leaves, and mainly their seed.

Persicaria punctata leaves can grow up to 6″ in length x 3/4″ wide. This threw me because the massive colony behind the chicken house had very few leaves over 4″ long. So, initially, I thought they were Persicaria hydropiper. They all have green stems which is certainly not a distinguishing feature of P. hydropiper. So, I was confused… But how could this colony be P. punctata with such short leaves? The keywords are they can grow “UP TO” 6″ long. 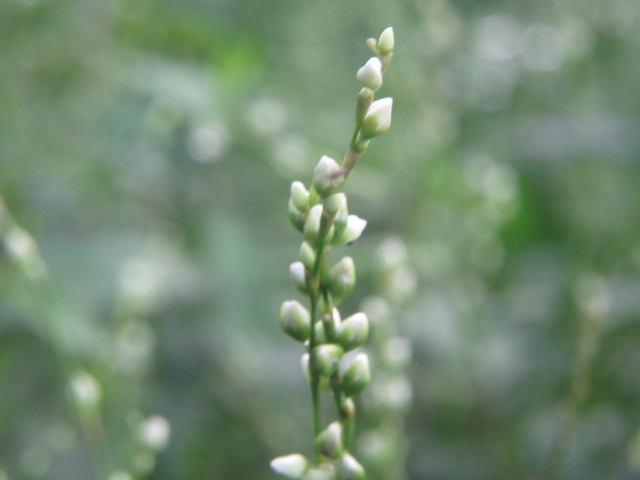 As with Persicaria hydropiper, P. punctata has flowers sparsely distributed on their raceme with can be from 2-6″ in length. I measured most of them at 6″ from the bottom of the first flower. A raceme is a long inflorescence with pedicellate flowers. GEEZ! One word leads to another. An inflorescence is the part of the plant with the flowers. I will describe the flowers more below…

The stems of Persicaria punctata are green and glabrous (without hairs and smooth). Each leaf node has a fairly translucent ocrea (sometimes spelled ochrea) which is a sheath that surrounds the node. This ocrea is formed by the fusion of two stipules. A stipule is formed at the base of the leaf’s petiole. A petiole is a stem-like gizmo between the stem and base of the leaf. The nodes are usually reddish color and swollen. As you will see in a photo below, the ocrea may have cilia (bristles) that fall off with age. 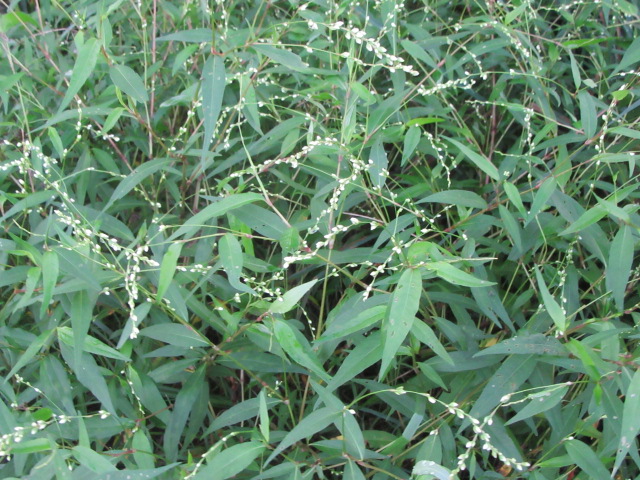 The racemes of Persicaria punctata, in my observations, can stand erect but often lean from one side or another. However, they are not “pendulous” as with P. hydropiper.

Both Persicaria hydropiper and Persicaria punctata have flowers with “punctate glandular dots”. They also supposedly have these dots on other parts as well. You can’t see them without magnification. I use a magnifying glass in front of the lens on my camera, which takes practice and patience) and I still can’t really see the “dots”. These glandular dots are distinguishing features of ONLY these two species.

The above photo is a colony of mainly Persicaria punctata next to the twin Mulberry trees in the front pasture. If you look close you can also see Persicaria pensylvanica (Pinkweed). If you look even closer you will see a few Persicaria longiseta (Oriental Lady’s Thumb). Around the corner in front of the trees is a MASSIVE colony of P. longiseta… 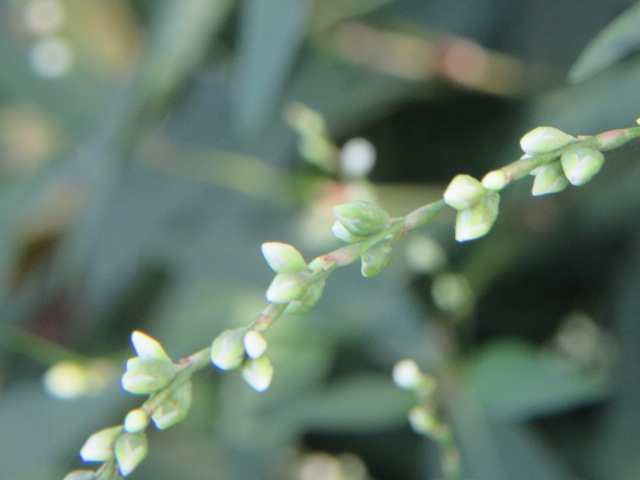 This is a better close-up shot of the flowers of Persicaria punctata. Flowers are petalless, have 5 sepals which are tightly folded and fuse together toward the lower half to 1/3.

Ahhh, the seeds! The final determining factor that distinguishes Persicaria hydropiper from Persicaria punctata is their seeds. You may have to use magnification, but the seeds of P. punctata are black and shiny while those of P. hydropiper are black to brownish and dull (not shiny). You may find brownish seed with P. punctata as well. Of all the Persicaria seed I have looked at, only P. hydropiper has dull seed. What is weird, is they form seeds VERY early in their flowering stage. You can peel away the sepals at almost any time and find a seed. I have checked the seed over a several week period and found the same results. 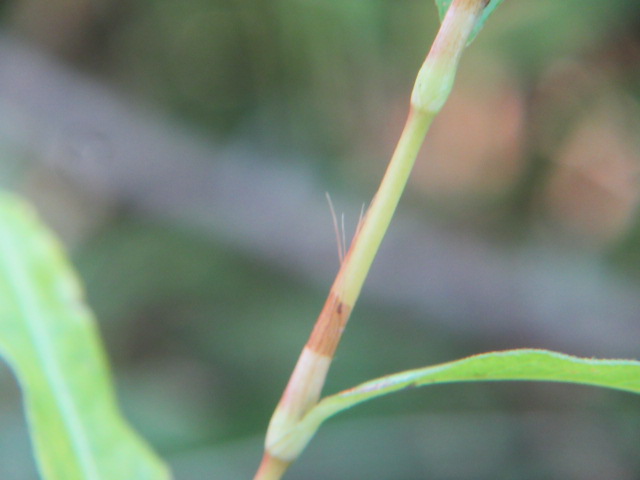 I finally found P. punctata plants with cilia (bristles, hairs, whatever you want to call them) sticking out of the ocrea. The upper part of the ocrea dry, become brown and fall off along with the cilia. This seems to happen fairly early. Even though I had been observing the Persicaria for a while, I didn’t see any stems with cilia until September 18. They seem to grow in spurts according to the weather. Also, if you mow them off, they will regrow fairly quickly.

The above photo shows an older stem where the ocrea is turning brown.

At last, I saw open flowers on a few racemes on September 18. Persicaria species are self-pollinating but most seem to be cleistogamous… That means they self-fertilize within a permanently closed flower. If their flowers do open, it seems to take forever.

The above photo was taken on September 22 behind the chicken house and barn. This area was covered with very tall weeds and once they were mowed the Persicaria punctata took off like wildfire. In there somewhere is a small colony of P. pensylvanica (Pinkweed), a few P. longiseta (Oriental Lady’s Thumb), and several Comellina communis (Spreading Dayflower).

I really enjoyed getting to know the Persicaria species and how unique each one is. I am writing a post called Perplexing Persicaria which has links to all seven species I have observed here on the farm. It is still a work in progress, so it may not be available just yet.

I have enjoyed photographing and learning about the many wildflowers growing on the farm and other areas. I have grown over 500 different plants and most have pages listed on the right side of the blog. I am not an expert, botanist, or horticulturalist. I just like gardening, collecting plants, photographing and writing about my experience. I rely on several websites for ID and a horticulturalist I contact if I cannot figure them out. Wildflowers can be somewhat variable from location to location, so sometimes it gets a bit confusing. If you see I have made an error, please let me know so I can correct what I have written.