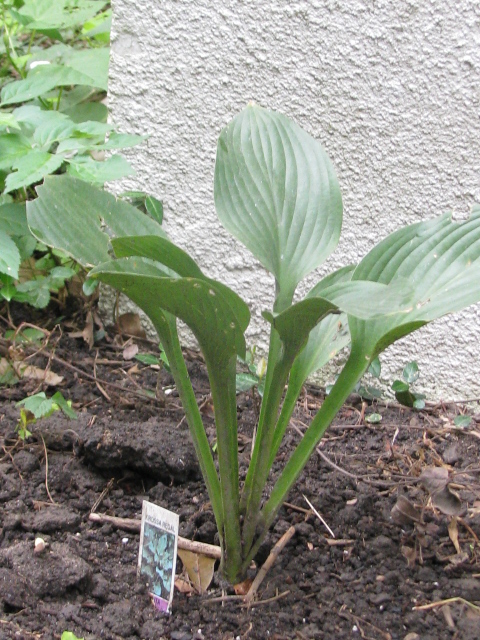 Hosta ‘Krossa Regal’ was brought to America from Japan by Gus Krossa. It was registered with the American Hosta Society in 1980. Some information says it was registered by Alex Summers others say by his wife, Alma, after his death.  If I remember correctly, I once read the plant was given to Alex Summers by Gus who then registered it.

There are 23 registered sports of Hosta ‘Krossa ‘Regal’ and three registered hybrids with it as a parent. One of its most famous sports, Hosta ‘Regal Splendor’, was registered by Walters Gardens in 1987 and was the 2003 American Hosta Growers Association Hosta of the Year. It also received the American Hosta Society Benedict Garden Performance Award of Merit.

I bought my first Hosta ‘Krossa Regal’ from Bluestone Perennials in the early 1980’s when I first moved to my grandparent’s farm after my grandfather passed away. After I left in 1987, my father was left to mowing the yard and eventually mowed off the Hosta. Then, when I was living at the mansion in Mississippi, I bought another Hosta ‘Krossa Regal’ from an Ebay seller in 2009. I sold the mansion to a group who wanted to turn the mansion into a bed and breakfast and dad wanted me to return to the family farm. So, in February 2013, I gave away around 200 plants and moved back to the family farm that I had left in 1987. I brought most of my succulents, Colocasia and Alocasia, several perennials including my Hosta, and several other plants I couldn’t leave behind.

The Hosta ‘Krossa Regal’ managed to do fairly well in Mississippi while most of the others just “hang in there”. None of the Hosta flowered in Mississippi for some strange reason. 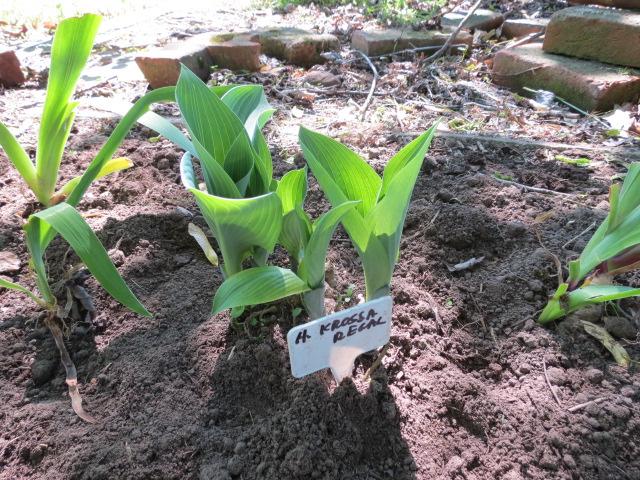 In the 1980’s I had made a Hosta bed along the northeast corner of my grandparent’s home. The house is no longer there, so when I moved back in 2013, I had to do something else. I had also built a bed around grandma’s old goldfish pool which was now shaded by three large trees that weren’t there before. So, I dug a spot there for the Hosta and Ajuga reptans ‘Chocolate Chips’ I brought with me from Mississippi. The gold flowered Iris I had planted in the early 1980’s were still there! 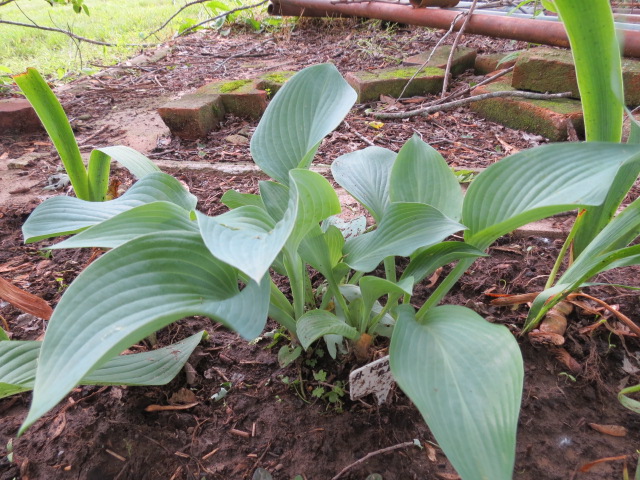 Hosta ‘Krossa Regal’ caught my eye in 1981 because Bluestone’s information stated it grew to over 36″ tall and had flower stems up to 6′ tall. Well, back then as now, I like really BIG plants. So, I had to have one of course. Hosta ‘Krossa Regal’ has other distinguishing features such as their vase-shaped growth habit and powdery blue-green leaves.

Hosta ‘Krossa Regal’ has thick leaves which make is very slug and snail resistant. I don’t have any problems with either one here, but I did have some problems in Mississippi. This is important to know for you if you have slug and snail problems. 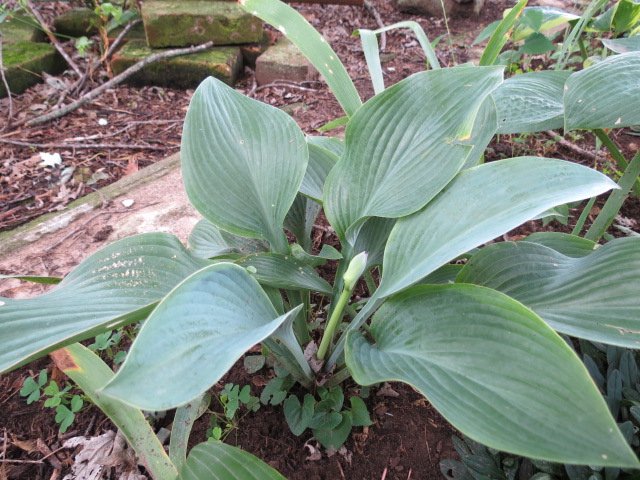 FINALLY in 2013 after several years, my Hosta ‘Krossa Regal’ flowered! 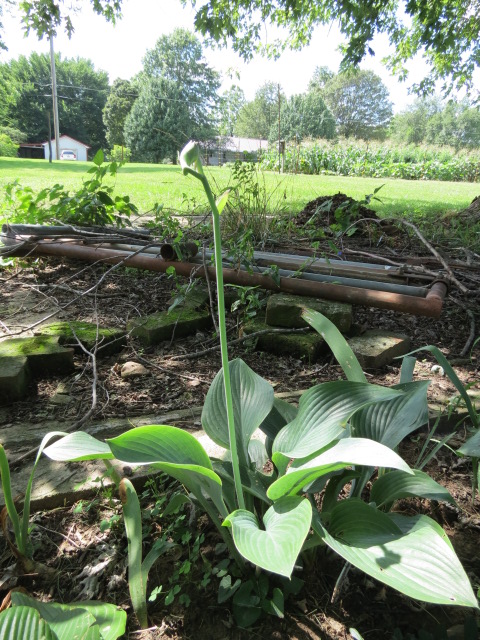 It seemed like forever watching the stem grow taller and taller. 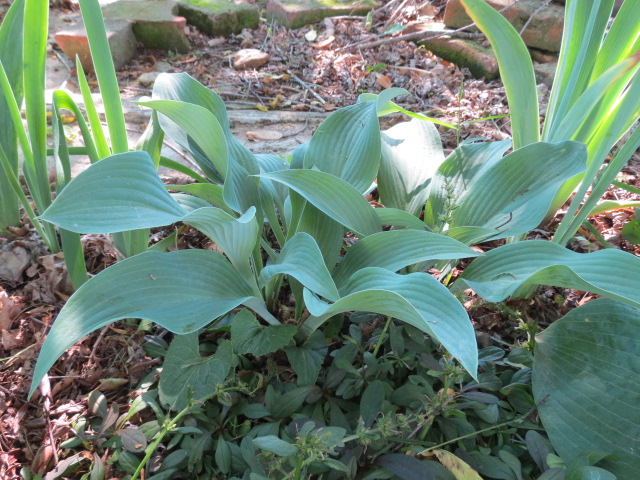 I will let you know right now, if you expect a 36″ tall plant within a couple of years, you will just have to be more patient. Although H. ‘Krossa Regal’ MAY ultimately reach that size, it will take some time. So, don’t do as I did and plant it at the back of the bed with other cultivars that will grow large faster. They will overshadow your ‘Krossa Regal’. 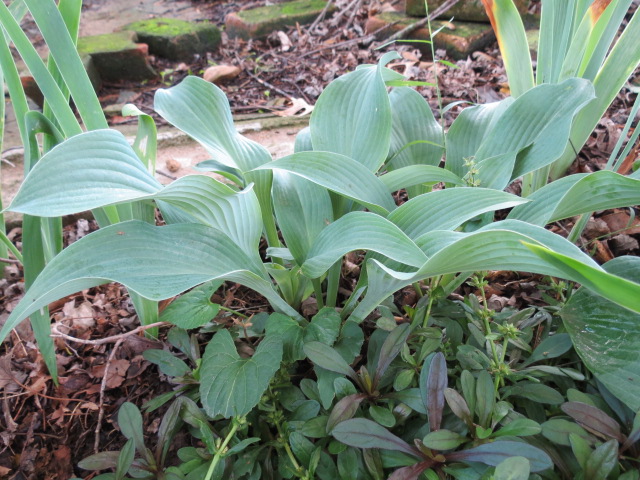 Even though I really like this plant, I take a lot of photos during the summer and am running out of words… 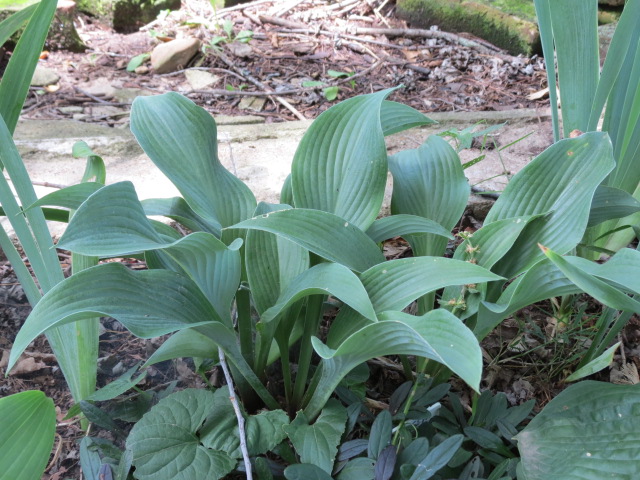 No doubt if you grow Hosta ‘Krossa Regal’, you will admire it for its graceful growing habit. While the leaves of other Hosta grow this way and that, this plant seems to perfectly position its leaves with a definite plan. 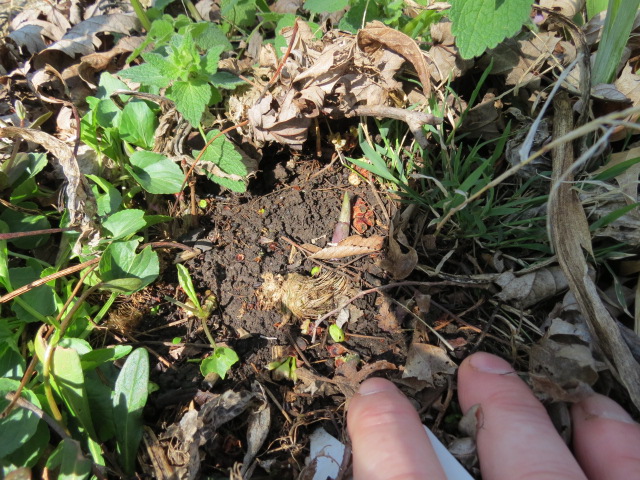 As always, spring is an exciting time of the year. Waiting with anticipation all winter to see what has survived and what hasn’t is a real killer. It is always great to see the first sign of the Hosta emerging from their winter hibernation.

It is always nice to see the clumps get larger each year. It makes you feel you have done it right. 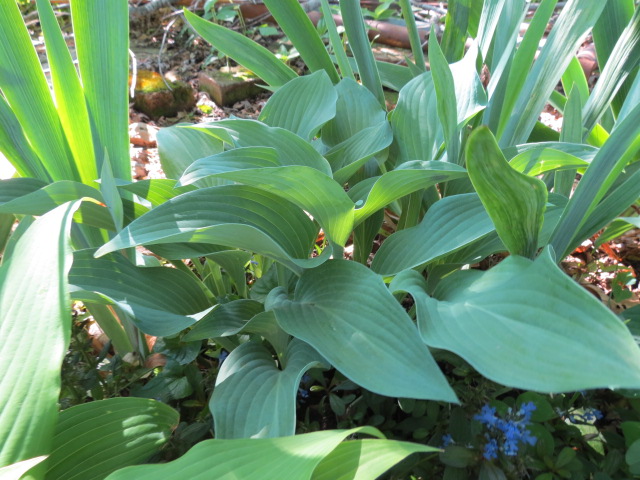 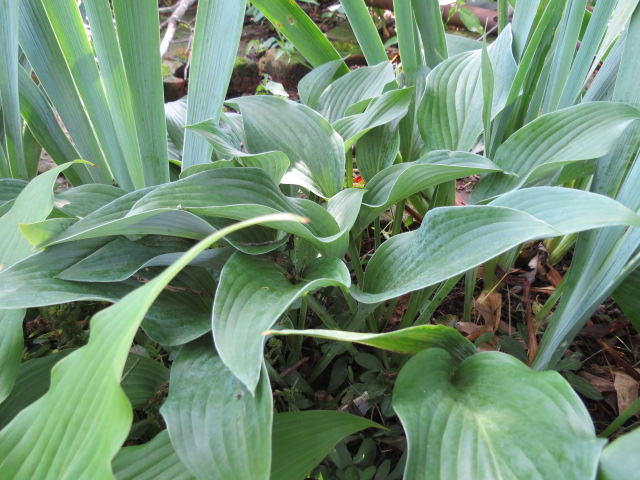 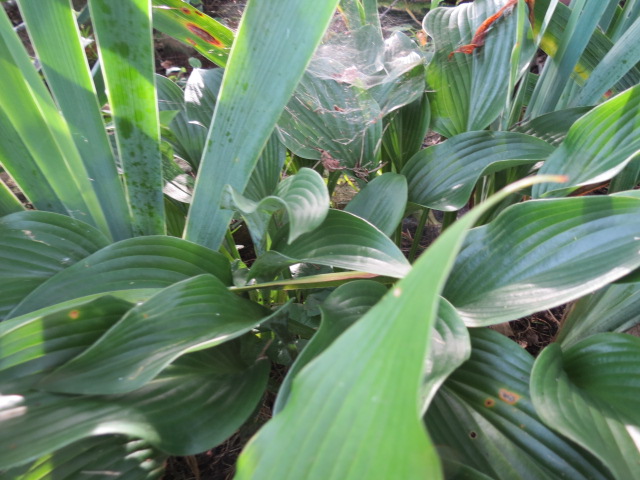 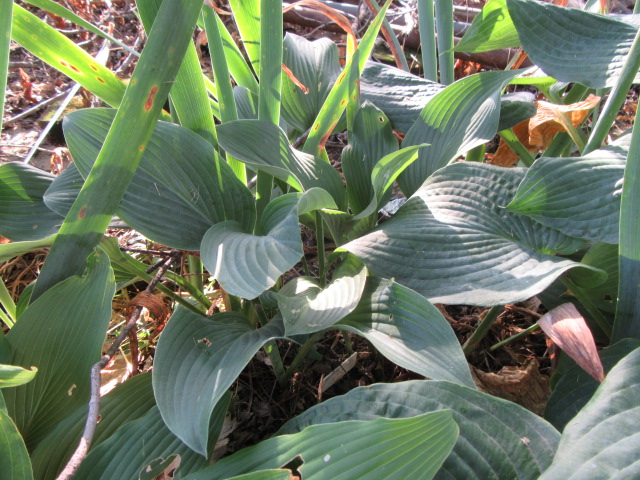 During 2016 it appeared to me there was a problem… It seemed as though the clump of ‘Krossa Regal’ were getting crowded out. You can’t see it in this photo, but in front to the right is the ever-growing Hosta sieboldiana ‘Elegans. To the left is Hosta ‘Red October’ (in the front of the bed) and Hosta ‘Guacamole’ on the back corner. 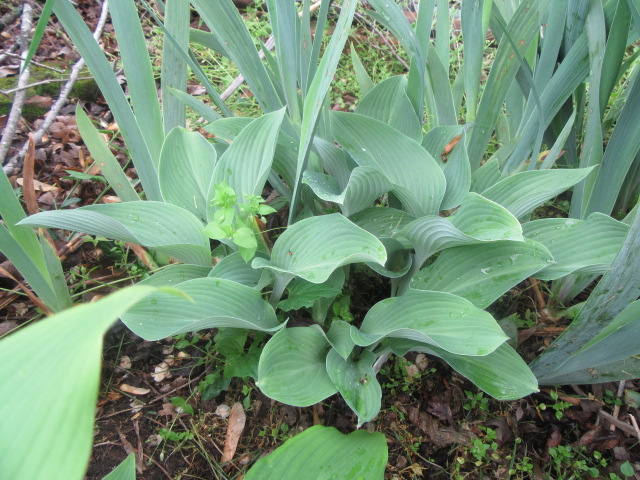 Well, I knew something needed to be done for sure because Hosta ‘Krossa Regal’ was far more deserving than to be crowded out on the back row…

So, I dug a spot at the end of grandmas’ old goldfish pool. Originally, back in 1891, I had made a brick sidewalk all the way around the fish pool. I had to dig up the bricks, which somehow got buried under several inches of dirt. I moved the Hosta ‘Krossa Regal’ and was happy to find it had spread. Yeah, I know! I am supposed to put them farther apart… I could have left them in one big clump but I decided to separate them a little. Later, I bought a beautiful Hosta ‘Dancing Queen’, my first yellow-gold leaved Hosta! They made great companions. I also moved the Heuchera ‘Palace Purple’ to this spot because it was also having difficulties. 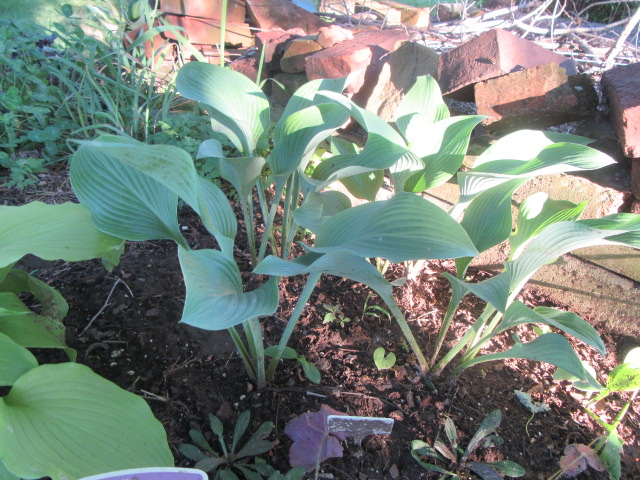 Apparently, the Hosta ‘Krossa Regal’ approved of the change. It looks so happy now! 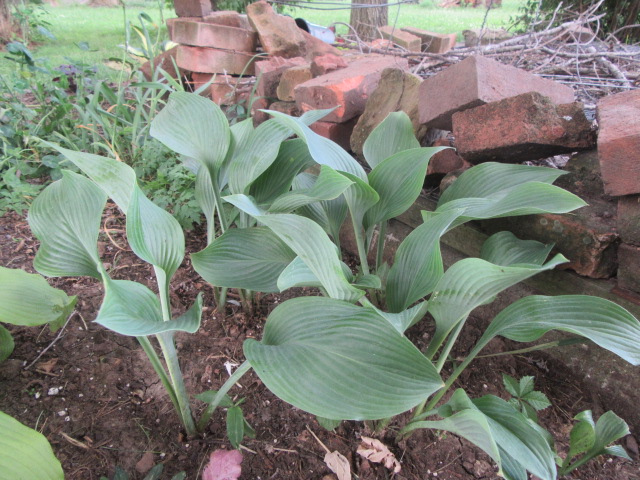 The grassy looking plants in the background are Iris fulva I brought back from Mississippi. 🙂 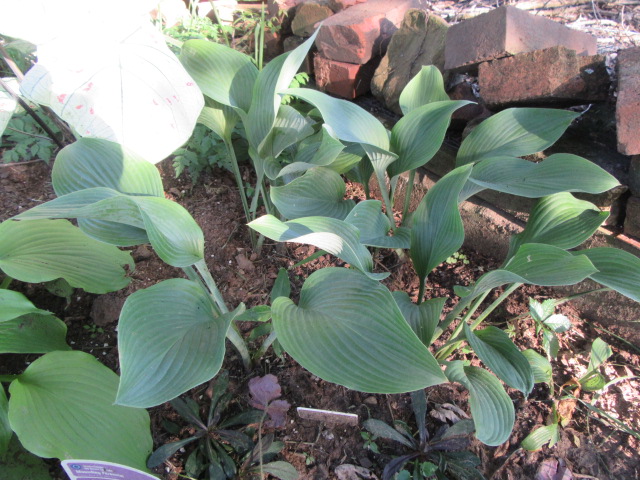 The big white leaf is from another new addition. Caladium ‘Strawberry Fields’.

As cooler weather approached many of the Hosta are showing signs of winter hibernation. The Hosta Krossa Regal’ had a good summer and I hope it returns in the spring. The Caladium ‘Strawberry Fields’ was definitely a show stopper, but it was one of the first to go dormant. I saved the bulbs! 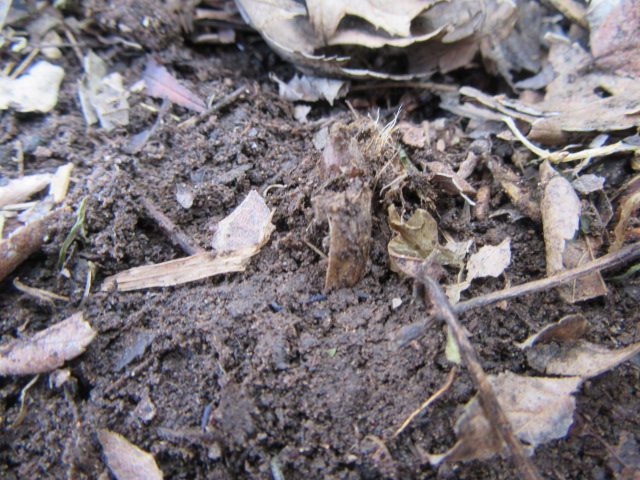 The early part of January was very cold and we didn’t have much snow. I had a nice layer of leaf mulch on top of the Hosta to keep the ground frozen. Despite the cold temperatures, I had to start poking around in the shade beds on March 3 to see if any Hosta had started coming up. To my surprise, several of them were starting to poke through. 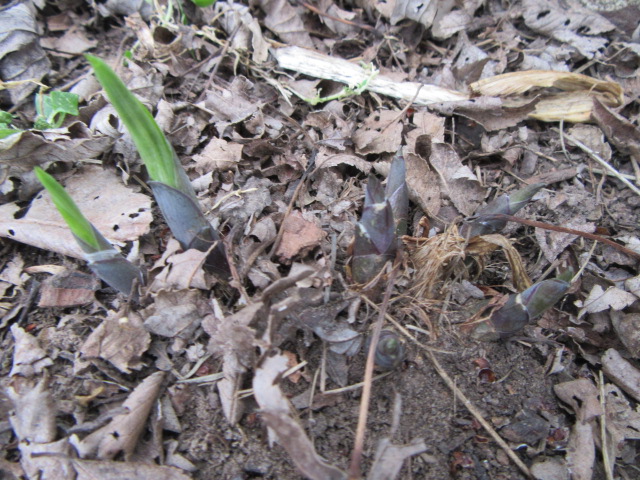 A month later, on April 13, they were well on their way. The cold temperatures lingered on so that set them back a little bit.

By May 6, Hosta ‘Krossa Regal’ was looking very good. 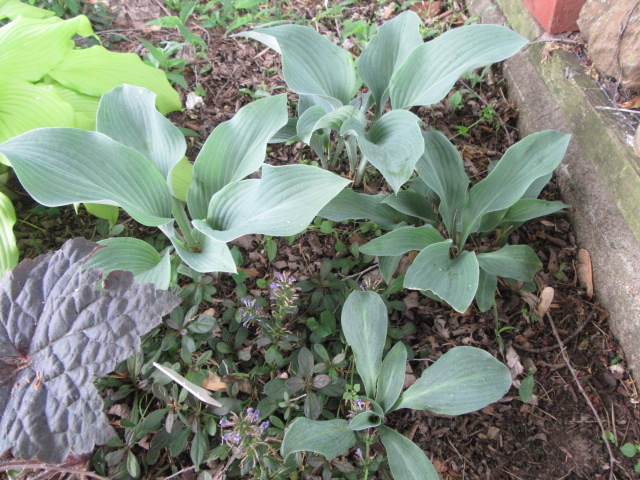 One of them wasn’t doing so good, so I moved it to another location on the north side of the house. It didn’t do well there either… 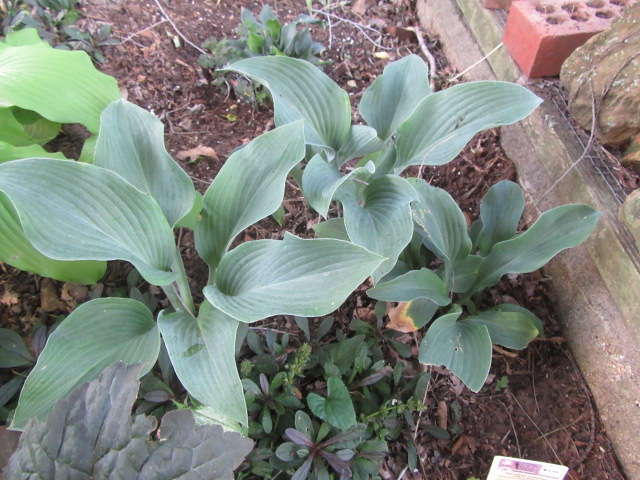 I think the soil needs to be amended with some of “The Good Stuff” in 2019. (Composted cow manure which I have plenty of.) 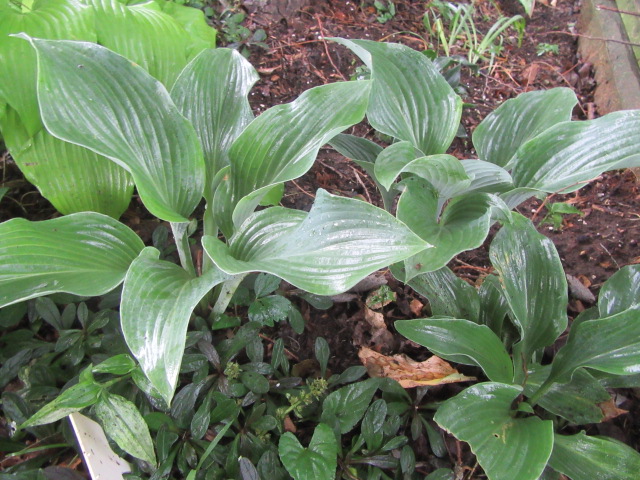 I decided to write a post about the Hosta so I measured all of their clumps on June 20 and 21. Well, it wasn’t fair for Hosta ‘Krossa Regal’ because I divided the clump… 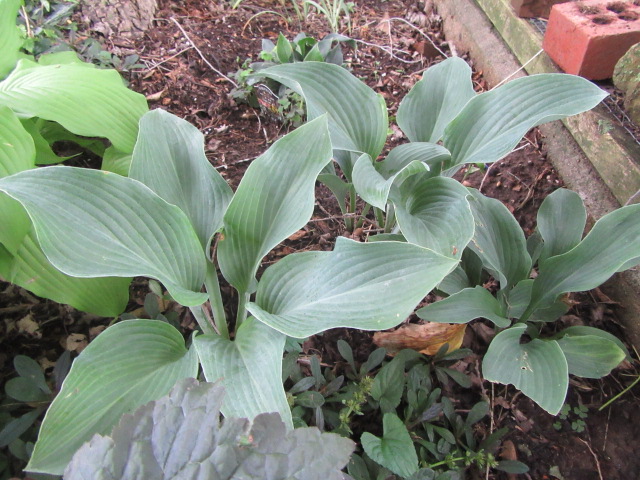 We had a bad Japanese Beetle invasion which left the shade beds a disaster. They are under one maple and two Chinese Elm trees. The beetles love the leaves on the elm trees and left the shady area with MUCH more sun. That required a lot more watering… 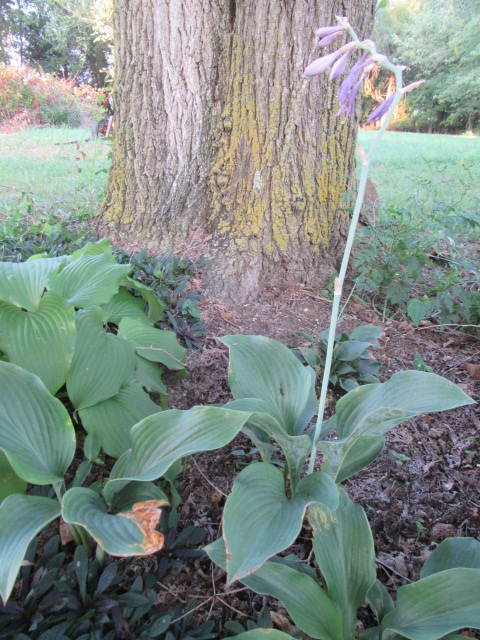 Despite the additional sun, Hosta ‘Krossa Regal’ continued to do well where many of the other Hosta’s leaves were being burned.

Well, that’s it for photos of Hosta ‘Krossa Regal’ for 2018. Weare looking forward to the spring of 2019 so I can take more photos!

The winter wasn’t as cold but we did have more snow. The snow was always followed by nice temps where all the snow melted. Then, it would snow and get cold again. This happened several times. I had previously checked on the Hosta on March 7 and 10 but hadn’t noticed any of the ‘Krossa Regal’ coming up yet. I checked again on March 24 and found 2 sprouts where I had planted one of the four plants. I had divided and replanted them in a different location in 2017. One of them wasn’t doing so good, so I relocated it again. SO, there are still supposed to be three plants in this location. I found one group on March 24 but I didn’t look for the other two yet.

I checked on the Hosta again on April 7 and the Hosta ‘Krossa Regal’ where I checked before has grown a little more. 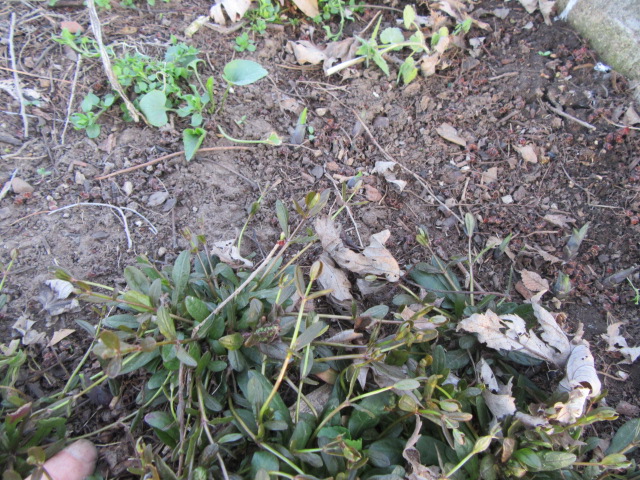 Then I found all three. One is among a few Ajuga reptans ‘Chocolate Chip’ where my finger is pointing, one is in the upper part of the photo in the center and the other is in the right side in the center. 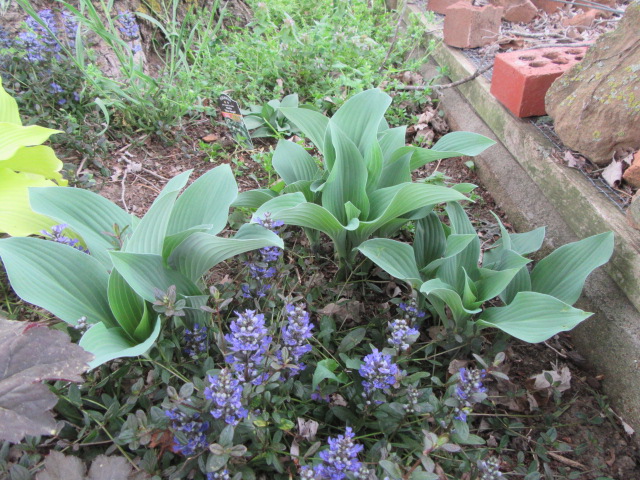 Plants are growing fast this time of the year so I had to take another set of photos for a post. 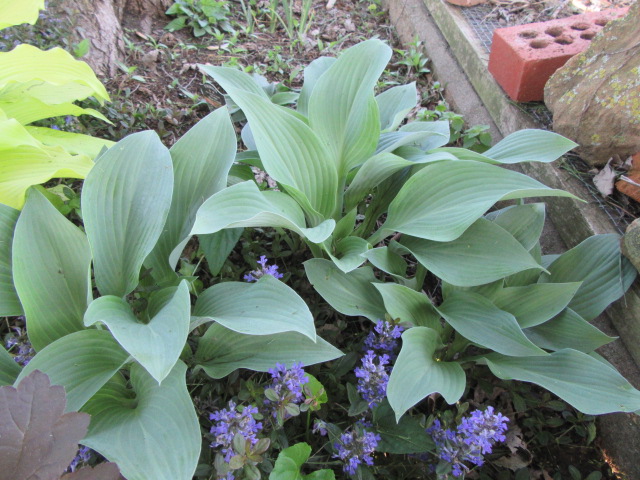 The Hosta ‘Krossa Regal’ had absolutely no problems and was outperforming almost all of the other Hosta by May 5.

The Hosta ‘Krossa Regal’ is a bit of a late bloomer but that’s OK. I don’t have it necessarily flor the flowers. It has AWESOME foliage!

I hope you enjoyed this page. If you have any comments, questions or suggestions, I would like to hear from you. Please click on the “Like” below if you have visited this page. It helps us bloggers stay motivated. 🙂 Click here for my page about the Hosta genus, growing information and sources. The links below are specifically for this cultivar. There are several good sources of Hosta somewhere toward the bottom on the right side of the page. If you have favorite sources not listed let me know and I will add them. If you notice I have made errors, let me know so I can correct them.