Hosta ‘Abiqua Drinking Gourd’ is a hybrid of Hosta ‘Tokudama’ and Hosta sieboldiana. It was registered in 1989 by Dr. Charles Purtymun of Walden West Hostas in Oregon. Dr. Purtymun used the name “Abiqua” in 24 other Hosta cultivars, named after the Abique Creek that flows through the Cascade Mountains. The “Drinking Gourd” part of the name comes from when he saw a dog drinking water from one of the plants leaves.

I apologize for the untidiness. There is always plenty to do on the farm and sometimes the beds get a little weedy. It seems like I take photos before weeding instead of right after. I amended the soil with composted cow manure and hay, what I call “The Good Stuff”, so there is always grass and weed seeds that come along.

I take a lot of photos, sometimes only a few days apart. I hope you enjoy them.

I brought this Hosta home from Lowe’s on April 23, 2017. It is a unique cultivar with heavily corrugated and cupped blue-green leaves. The leaves are thick and slug resistant. 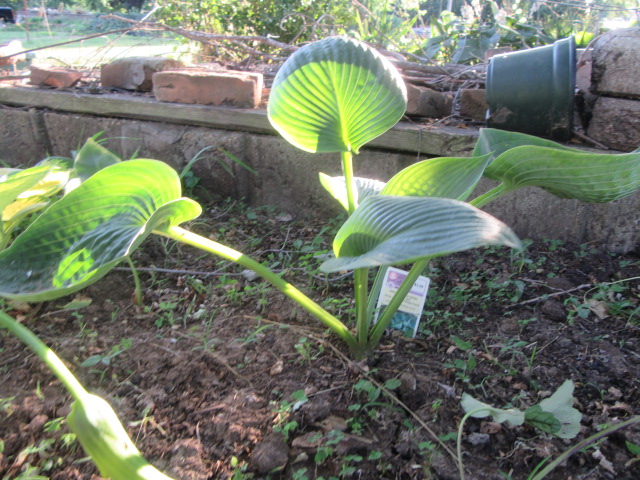 When cooler temperatures came and daylength started decreasing, many perennials knew it was getting time to sleep. Sleep well my new friend. I hope to see you again in the spring. 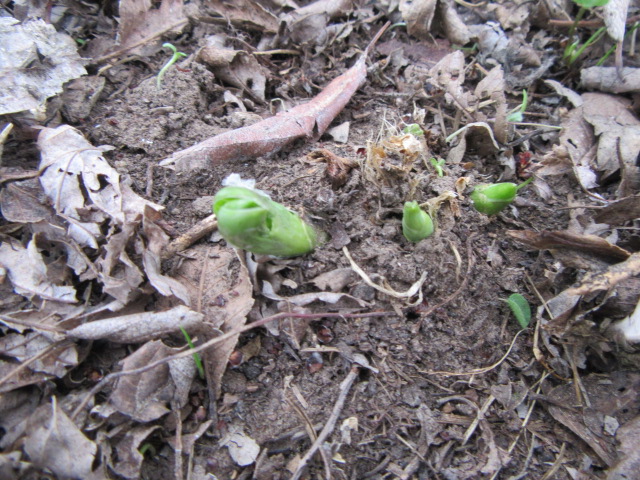 Spring is always an exciting time and I am always anxious to see if the Hosta have made it through. Some appear sooner than others which just makes me check every few days. 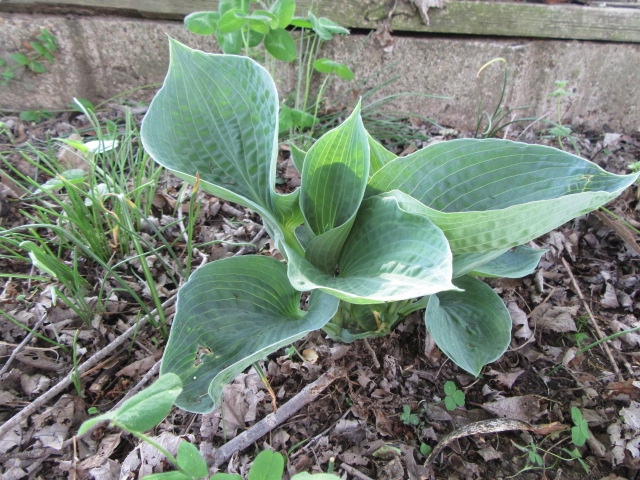 Hosta ‘Abiqua Drinking Gourd’ getting off to a good start by May 6 in 2018. 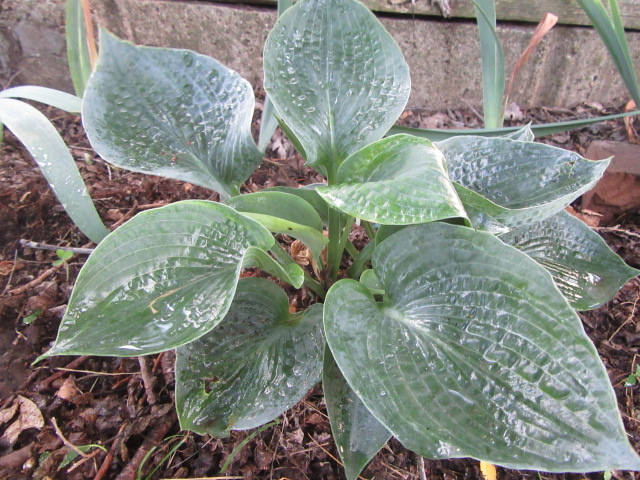 I really like the thick, heavily textured, and cupped leaves of this Hosta. 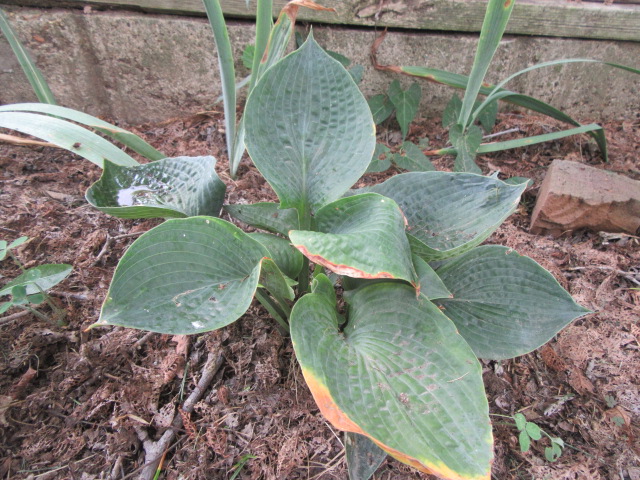 With the invasion of the Japanese Beetles, the shade beds were receiving more light. The light was still somewhat filtered, but it was certainly not good for shade-loving plants.

This winter wasn’t as cold as last and we had more snow. We had mild temperatures followed by snow and cold. Then the weather would be nice and the snow would melt then we would get snow again. This happened several times and it is not necessarily good for many perennials. I went out to check on the perennials, mainly the Hosta, on March 7 then again on March 10. There were several Hosta I couldn’t see sprouting yet. I thought that was a little weird. I checked again on March 24 and found more soil had covered one of the Hosta, so I thought maybe that’s what happened to the others I couldn’t find. As it turned out I was looking behind their labels instead of in front of them. All my plant labels are in front of the plants so it was weird one group had ther labels in the rear… Hmmm…

The Hosta ‘Abiqua Drinking Gourd’ growing at a snail’s pace on April 7. 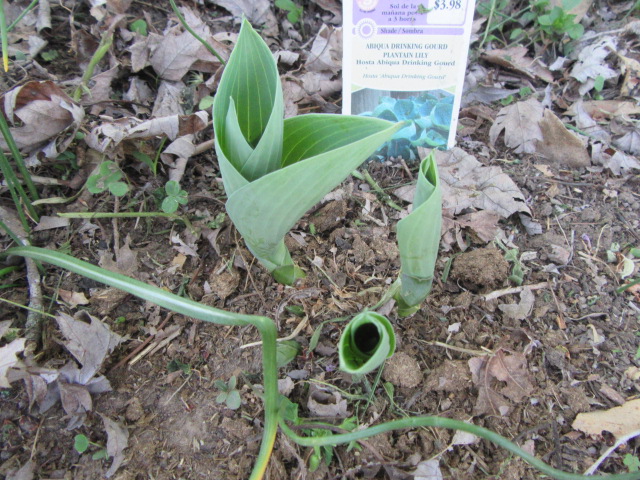 Well, we are getting there. 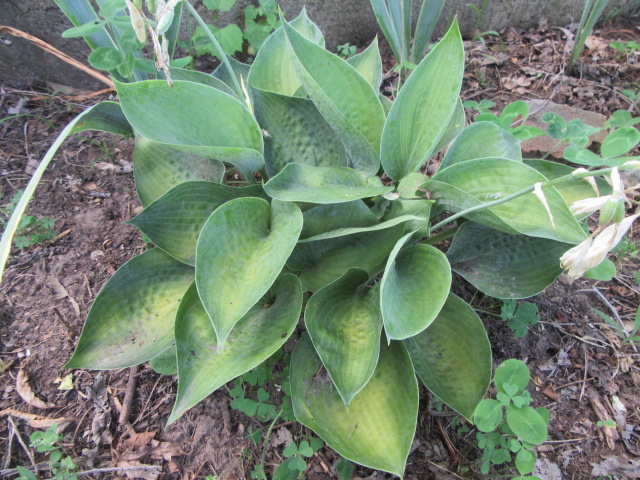 The Japanese Beetles weren’t as bad in 2019 as they were in 2018 because I had a trap right next to the shade bed. They love the leaves of the Chinese Elms and there are two that shade the beds where the Hosta are. They turned a shady area into light shade which caused some of the Hosta’s leaves to burn somewhat. 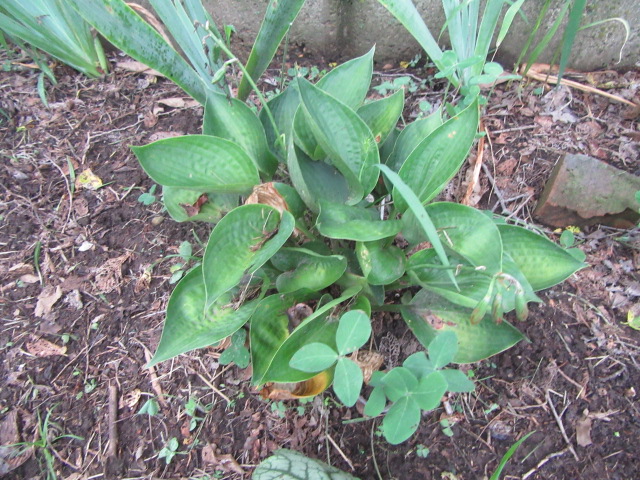 Spring was in the air when I took the above photo on March 30 and the Hosta have been “working on it”. Most of them have been poking out of the ground for a while and now are beginning to turn green. They are a bit slow sometimes when cool temps linger, but as soon as it gets warm enough they will start growing better. It seems like they are anxiously waiting for the perfect opportunity. 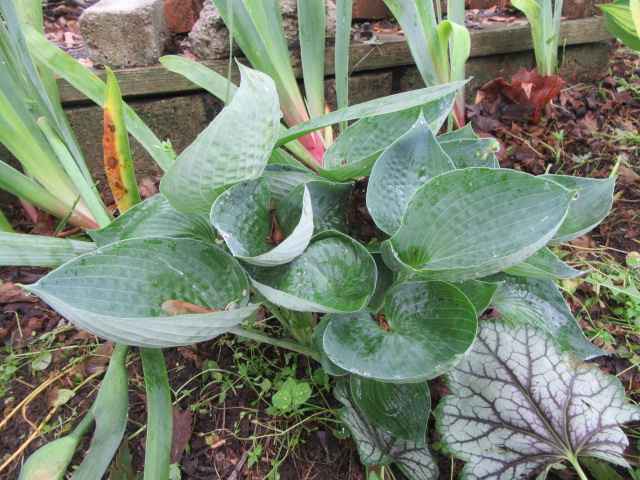 By May 15, the Hosta were well underway and looking great. I was fairly busy over the summer of 2020 so I didn’t get to take many photos. The Hosta did very well and we had rain off and on. Luckily, we didn’t have much of a problem with the Japanese Beetles like in 2019, so the shade beds stayed shady…

Hosta ‘Abiqua Drinking Gourd’ is a great Hosta and I recommend growing giving it a shot.

I will continue adding more photos as time goes on.

If you have any comments, questions or suggestions, I would like to hear from you. Please leave a “like” below if you visited this page. It helps us bloggers stay motivated. 🙂 Click here for my page about the Hosta genus, growing information and sources. The links below are specifically for this cultivar. There are several good sources of Hosta somewhere toward the bottom on the right side of the page.