Tacca chantrieri André is the accepted scientific name for this plant. It was named and described by Édouard-François André in Revue Horticole in 1901.

The genus, Tacca J.R.Forst. & G.Forst., was named and described by Johann Reinhold and Johann Georg Adam Forster in the 2nd edition of Characteres Generum Plantarum in 1776.

As of 12-20-22 when this page was last updated, Plants of the World Online currently lists 19 species in the Tacca genus. It is a member of the plant family Dioscoreaceae with 4 genera. Those numbers could change as updates are made on POWO.

I bought my Black Bat Flower from Wellspring Gardens as a starter plant in the spring of 2012. I also bought a White Bat Flower as well as many other plants. You don’t have to spend a lot of money to purchase some very interesting plants. Starter plants are much less expensive although it may take them longer to grow. That way you can gain more experience even though it is sometimes a pain. 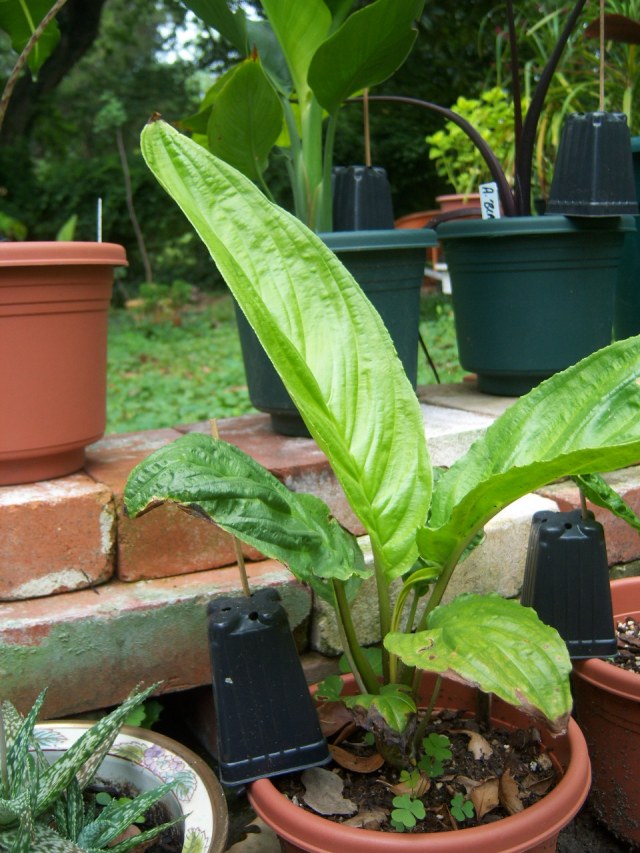 I spent a lot of time with my plants, but by the time I noticed this flower it was already starting to wilt. Supposedly they flower in late spring through summer, but the above photo was taken on August 4.

Flowers can grow up to 12” wide with whiskers up to 24” long. Flowers late spring through summer. They need bright light to flower but keep them from direct sun. Some information suggests they don’t flower until they are 2-3 years old. I bought mine as a starter plant and it flowered the same year.

The Black Bat Flower can grow up to 36” tall and its lance-shaped leaves can grow around 24” long or more.

Wikipedia says they are native to the rainforest in the Yunnan Province in China. Plants of the World Online shows a much wider territory not only in China but also in Assam, Bangladesh, Cambodia, Hainan, Laos, Malaya, Myanmar, Thailand, Tibet, and Vietnam.

Tacca needs a lot of humidity, especially if grown as a houseplant, and especially over the winter. Mist, use a humidifier, or a pebble tray.

Re-pot each spring with fresh potting mix. It doesn’t like crowded roots. Divide rhizomes when repotting and give them their own pot.

Although they like their soil consistently moist, they do not like soggy soil. Make sure their soil is well-draining because soil that is to wet to wetl will cause their rhizomes to rot.

Information online says they prefer a steady temperature of 65-70 degrees F year-round. Mine did perfectly fine, and flowered, outside in Mississippi when the temperature was in the 90’s and even over 100 for days on end.

Information online also says to feed every two weeks with a 10-20-10 fertilizer diluted at half strength. I used Miracle Grow Potting Soil with added organic matter. Do not feed during the winter. Well, if you use Miracle Grow or potting soil with timed-release fertilizer in the spring, it only lasts for 6 months anyway.

After I sold the mansion in Mississippi, I moved back to the family farm in mid-Missouri in February 2013. I had to give up several hundred plants including my Bat Flowers. I gave most of my plants to a good friend and fellow plant collector from Greenville.

Maybe someday I will try the Bat Flowers again. 🙂