The genus, Dichanthelium (Hitchc. & Chase) Gould, was named and described as such by Frank Walton Gould in Brittonia in 1974. It was previously cited as subgenus Panicum subgen. Dichanthelium by Albert Spear Hitchcock and Mary Agnes Chase in 1910.

As of 12-9-21 when this page was last updated, Plants of the World Online lists 98 accepted species in the Dichanthelium genus. It is a member of the plant family Poaceae with 778 genera. Those numbers could change as updates are made on POWO. 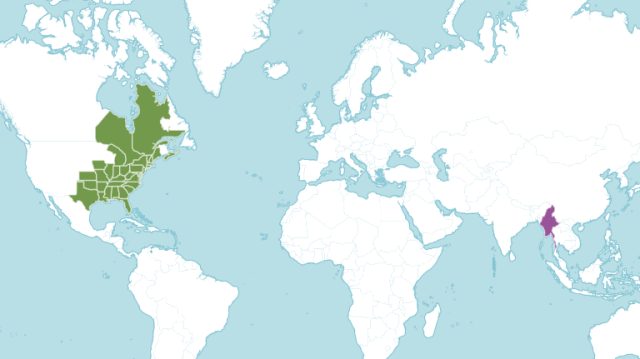 Distribution map of Dichanthelium clandestinum from Plants of the World Online. Facilitated by the Royal Botanic Gardens, Kew. Published on the Internet; http://www.plantsoftheworldonline.org/. Retrieved on May 26, 2021.

The above distribution map for Dichanthelium latifolium is from Plants of the World Online. Ares in green is where the species is native and purple where it has been introduced. The distribution map on the USDA Plants Database is the same for the United States and Canada.

There is a swampy area in the southeast corner of my farm in Windsor, Missouri where this species had run rampant. When I first moved back here to the family farm in 2013, the Impatiens capensis (Jewel Weed) was king of the swamp. Not anymore… After a couple of years, this Dichanthelium species took it over BUT that didn’t last long either. Now a different species of grass has the throne. The area is a swamp partly because Farrington Park Lake has a drain in the area. To give a little more history, which may not matter to you, the Rock Island Railroad used to run along the south boundary of the farm. The railroad used soil along where they need to buildup the “roadbed” for the tracks which is what partly happened with the southeast corner of the farm. Back in the steam locomotive days, Rock Island Railroad dug a lake on the other side of the tracks for water for the steam locomotives. Once steam was replaced by diesel engines, the railroad donated the lake and surrounding land to the city of Windsor for a park. The Rock Island Railroad is now part of the Katy Trail. Anyway, there is a drain under the trail that drains in a low spot that was dug by the railroad to buildup the tracks. This corner of the farm is low anyway and there is always water standing between the fence and trail right-of-way. Despite it being a mosquito haven, the Japanese Honeysuckle has taken over the fences. There is also an abundant amount of other insects and birds. I have been there in the past and there were MANY Hummingbirds.

The first and second photos were taken on July 25 (2019) and it took a while to figure out what in the heck it was. At that stage, or any other for that matter, you may not recognize it as a type of grass. I thought it could be a species Tradescantia (Spiderwort) or maybe a species of Persicaria (Smartweed/Knotweed). The leaves didn’t actually match any species of either two and there were no flowers to look up. Finally, I sent photos to a horticulturalist who maintains the Midwest Weeds and Wildflowers website from Mississippi State University (Springfield, MO). Although she doesn’t have them on her site, she told me they were Dichanthelium latifolium. I looked them up online and thought she was correct…

Over the next several months I took a lot of photos of a colony that wasn’t in the swamp. They had escaped the swamp and a fairly good-sized colony was growing next to the fence along the back of the pasture.

There isn’t much online about this species which was another reason I had some difficulty. One of the best ways to figure out what species of wildflowers you have is with their flowers. But, with this one there were no flowers.

At first, their leaves were fairly broad but they grow longer as the stems get taller and the season progresses. One characteristic feature of their leaves is their veins that run parallel to the midrib instead of from the midrib to the margin… Like grasses. 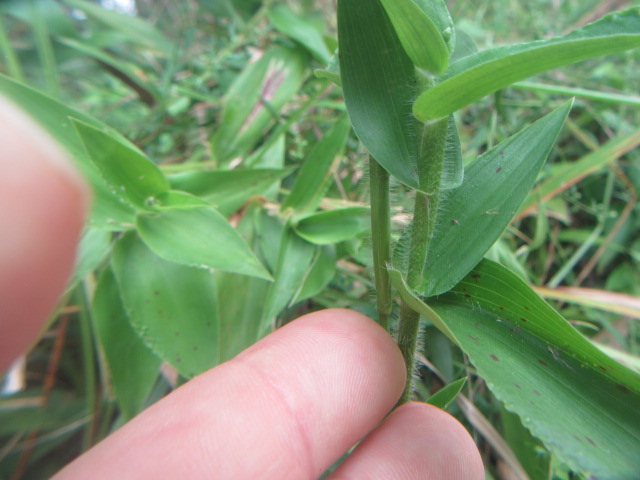 Dichanthelium are clump-forming perennial grasses with short (or no) rhizomes. Stems grow from 1-4 feet long, sort of erect at first but tend to sprawl as they grow taller. The genus was formerly a subgenus of Panicum but became a separate genus in 1974.

The base of the leaves are clasping, meaning they clasp around the stems. 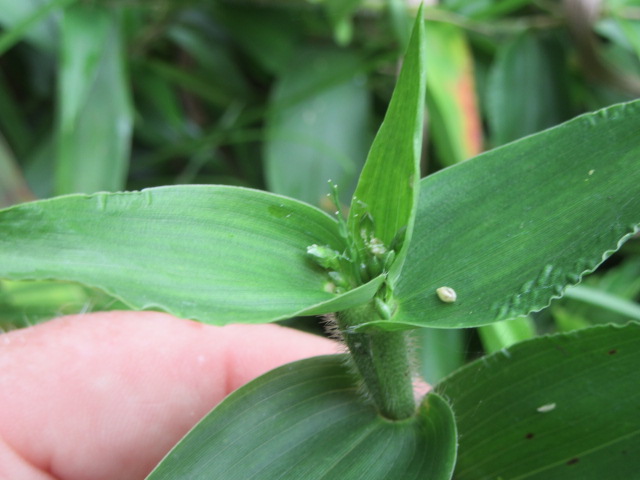 Every day when I went to the back of the farm I looked for flowers. All I was seeing was what looked like remnants… Steyermark’s Flora of Missouri says their inflorescences are 6-15 cm long… Hmmm… That’s around 2 1/3 to about 6 inches.

Steyermark’s further states about Dichanthemium latifolium that earlier inflorescences are larger than the later ones and are loosely ascending to spreading, mostly “rebranched”. I think that means they form secondary branches… Hmmm… So, does that mean the inflorescence forms secondary branches? The description is sort of complicated and talks about spikelets and glumes… 🙂 I would just write what Steyermark’s says, but that might break some kind of copyright rules.

The dictionary on my computer says a glume is “each of two membranous bracts surrounding the spikelet of a grass (forming the husk of a cereal grain) or one surrounding the florets of a sedge.”

A spikelet is “the basic unit of a grass flower, consisting of two glumes or outer bracts at the base and one or more florets above.”

One word seems to lead to another, so I think I better stop while I think I am ahead.

Inflorescence, glume, spikelets… at the top of the stem poking through a clasping leaf.

I uploaded photos on iNaturalist as an observation for Dichanthelium latifolium and a member asked if I was sure it wasn’t D. clandestinum. Until I started using iNaturalist I always pretty much used Missouri Plants for ID. They have no Dichanthelium species listed so I had no clue… Then, I checked out Steyermark’s Flora of Missouri which was still confusing. Then, I went to the Illinois Wildflowers page and read about D. clandestinum and then the muddy water cleared somewhat.

Supposedly, D. clandestinum produces an “exerted” inflorescence earlier in the season and another set, after the stems branch out, with inflorescences that are partially hidden. That must be what I am seeing in these photos that were taken on September 1st… However, since I never saw these plants with flowers early in the season, I continued thinking they were D. latifolium which only produces flowers late in the season. 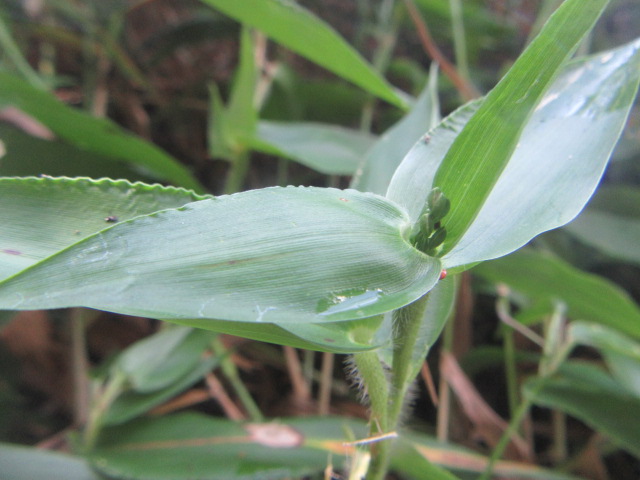 I noticed some of the leaves have jagged margins.

The upper stems are definitely “pubescent” (hairy) while not so much at the lower portion of the plant. 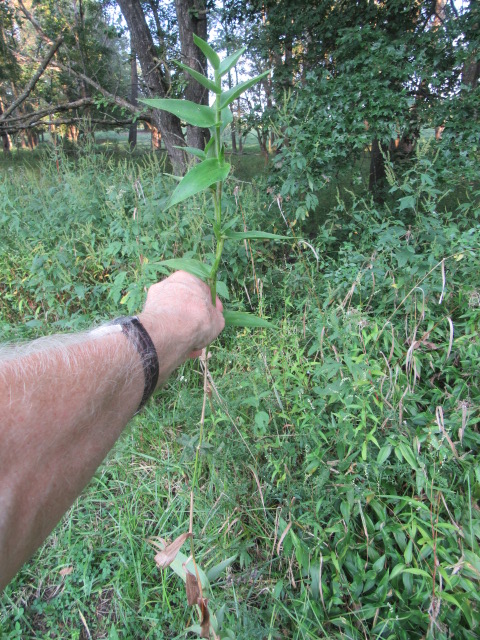 Here’s an idea of how long the stems can get. They can also root at the lower leaf nodes. 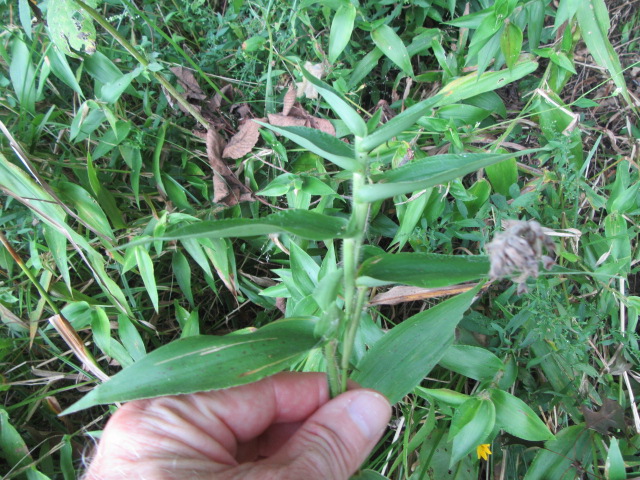 Sometimes I take photos for a reason then later don’t remember why… Well, I am writing this page 9 months after I took the photos. I catch up on updating the blog and writing new pages over the winter.

I decided to go for a walk to the back of the farm on April 11 (in 2020) to have a look around. You never know what you will find in early spring after a fairly mild winter. The Dichanthelium was greening up pretty well… 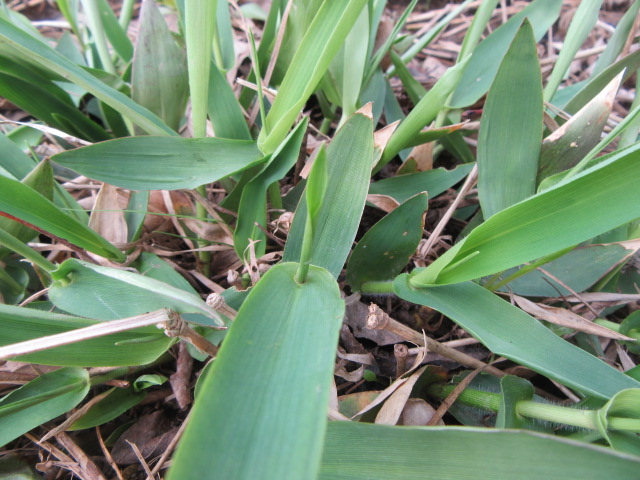 At this stage, you probably can’t tell one species from another. At least I knew it was the right genus because of where it was growing. 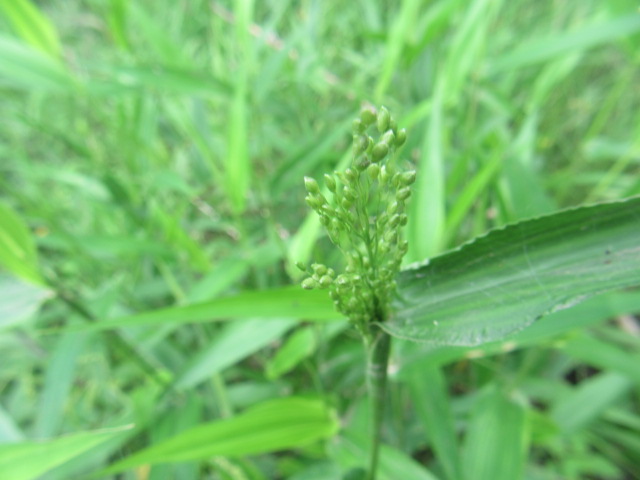 On May 24 in 2021 I decided to take a walk to the back of the farm. It had been a while since I had been back there, so I thought I better make sure everything was OK. Of course, I took the camera. I was especially looking for a species of wildflower I was writing a page for but I didn’t run across any. What I did find, to my surprise, was the Dischanthelium starting to flower… This confirmed I was in error believing they were Dischanthelium latifolium since they only flower later in the summer…

There are several small patches of this species here and there and a few HUGE colonies.

Well, I am very relieved to know exactly this species is definitely Dichanthelium clandestinum… Now I have to follow up and take photos of them with the flowers after they have grown. That is if the deer don’t eat them.

I have enjoyed photographing and learning about the many wildflowers growing on the farm and other areas. I have grown over 500 different plants and most have pages listed on the right side of the blog. I am not an expert, botanist, or horticulturalist. I just like growing, photographing, and writing about my experience. I rely on several websites for ID and a horticulturalist I contact if I cannot figure them out. Wildflowers can be somewhat variable from location to location, so sometimes it gets a bit confusing. If you see I have made an error, please let me know so I can correct what I have written.