Carduus nutans L. is the accepted scientific name for this species of thistle. It was named and described as such by Carl von Linnaeus in the second volume of the first edition of Species Plantarum in 1753.

As of 11-21-22 when this page was last updated, Plants of the World Online by Kew lists 92 species in the Carduus genus. It is a member of the plant family Asteraceae with 1,689 genera. Those numbers could change as updates are made on POWO.

Distribution map of Carduus nutans from Plants of the World Online. Facilitated by the Royal Botanic Gardens, Kew. Published on the Internet; http://www.plantsoftheworldonline.org/. Retrieved on November 21, 2022.

The distribution map for Carduus nutans is from Plants of the World Online. Areas shown in green are where it is native and purple shows where it has been introduced. The map on the USDA Plants Database for North America is somewhat different. You can click on the link to POWO to view the maps for the subspecies by going to their links.

I first encountered this species growing next to the barn in the summer of 2015. Dad said he had not seen them before and I hadn’t seen them anywhere on the farm since I moved back here in February 2013. He had to buy hay the winter I arrived because he didn’t have enough, so I think the seed had arrived with hay. These thistles were growing in a spot where a bale of hay had been fed during that time.

There are Bull Thistles growing around the pond and in the front pasture which I have been continually working on. The problem is, thistle seeds can lie dormant for 30-50 years so it is a continual battle. Whether you spray or dig, there are always more the following year.

Carduus nutans, like most other thistle species, is a biennial plant. They come up from seed and remain a small rosette the first year then flower and go to seed the following season.

The stems are wickedly spiny as are the long lance-shaped, lobed leaves. Definitely not a plant you would want to run into in the dark.

I am not going to give technical botanical terminology for this plant like I do most wildflowers. You can check out some of the links at the bottom of the page written by experts for that.

The flowers are AWESOME, however, and many pollinators adore them.

The flowers are pretty neat as the buds open. 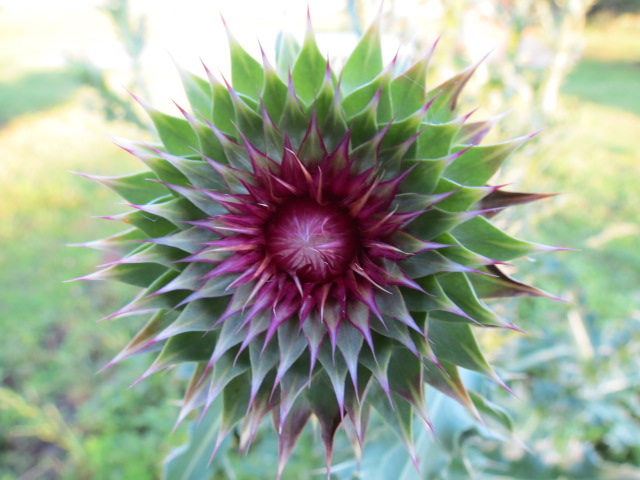 I told dad I would dig them up once they flowered so I could take photos. Besides spraying, I dig down 2-3″ below the soil to cut their taproots. This will kill the plant just as well as spraying. You have to burn the flowers and buds or spray them or they will go to seed… I saw no more of the Musk Thistle until one came up and flowered in another area where no thistles had been before…

I had started feeding cows for a friend of mine during the fall of 2018 on his farm north of town (not the farm he lived on). When spring arrived, he mentioned he would like for me to spray the thistles there. Well, it was spring and I hadn’t noticed that many yet nor did I know what type of thistles he was talking about. Then, when they started coming up, I could see they were Carduus nutans. At first I thought, “OH WOW! They are the ones with the silvery leaves.” Mind you, I had only experienced very few on my farm…

Next thing I knew they were coming up by the THOUSANDS! I am not an advocate of spraying, and he knew that, but I could tell digging was NOT an option. So, I used 2-4-D. There were a few Bull Thistles (Cirsium vulgare) which I also sprayed and dug at first.

It seemed like it was going to be a never-ending battle! So, I decided to concentrate my early efforts on the Musk Thistles because they flower earlier in the season and the Bull Thistles were just beginning to grow.

While I was out spraying on his farm I noticed several species of wildflowers I didn’t have on my farm. This gave me an opportunity to take more photos and ID more wildflowers.

Once I pretty much had the Musk Thistles pretty well whipped in the front pastures, I went to another part of the farm and there were thousands there as well… GEEZ! 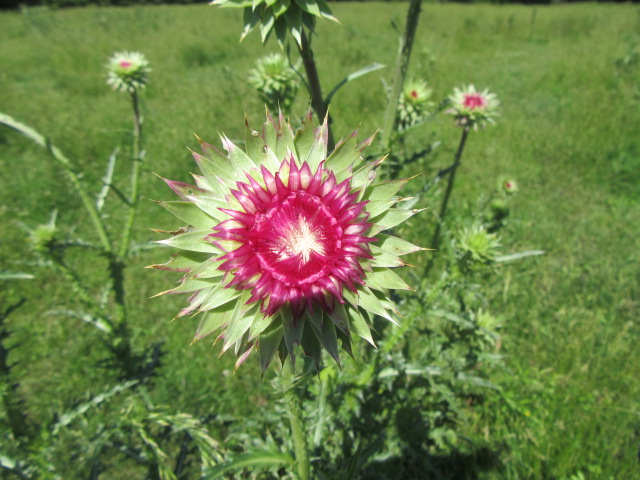 I am running out of words…

I am writing this page on January 26, 2020, when I have time to catch up on writing and updating pages for the blog. Seeing these photographs brings back A LOT of memories…

Then temperatures started getting HOTTER and spraying thistles all summer in the heat was definitely not what I had expected for the summer.

Not only was I spraying the Musk Thistles, but the Bull Thistles were also starting to bud.

So, as I had the Musk Thistles pretty much under control, I had to start spraying and digging the Bull Thistles.

Even though I had sprayed and dug thistles all summer there were a few that went to seed where I hadn’t seen them earlier. Although my friend and I both knew we had made a good stab at eliminating A LOT of flowers that would have gone to seed. Fortunately, hardly any came up in his pasture in 2020 and what did he just dug up.

A few still come up on the farm here, but as long as I continue digging them up they won’t become a problem like before.

I have enjoyed photographing and learning about the many wildflowers growing on the farm and other areas. My farm is in Windsor, Missouri in Pettis County (Henry County is across the street and Benton and Johnson aren’t far away). I have grown over 500 different plants and identified over 250 species of wildflowers (most have pages listed on the right side of the page). I am not an expert, botanist, or horticulturalist. I just like growing, photographing, and writing about my experience. I rely on several websites for ID and a few horticulturalists I contact if I cannot figure them out. Wildflowers can be somewhat variable from location to location, so sometimes it gets a bit confusing. If you see I have made an error, please let me know so I can correct what I have written.

NOTE: The figures may not match on these websites. It depends on when and how they make updates and when their sources make updates. Some websites have hundreds and even many thousands of species to keep up with. Accepted scientific names change periodically and it can be hard to keep with as well. In my opinion, Plants of the World Online by Kew is the most reliable and up-to-date plant database and they make updates on a regular basis. I make updates at least once a year and when I write new pages but I do get behind. We are all a work in progress. 🙂