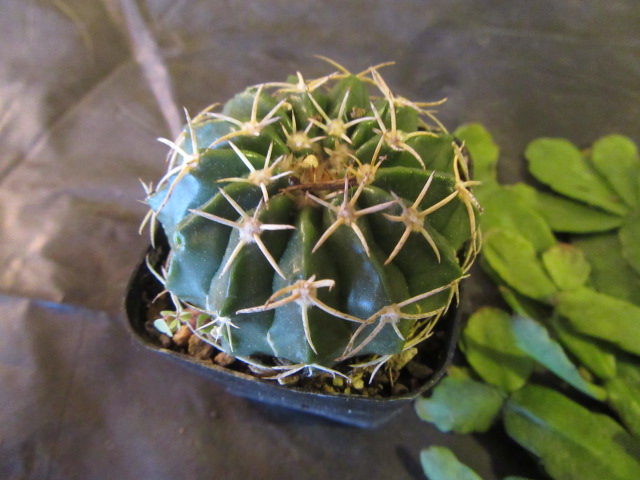 Parodia crassigibba (F.Ritter) N.P.Taylor is now the correct and accepted scientific name for this species of Parodia. It was named and described as such by Nigel Paul Taylor in Bradleya (Yearbook of the British Cactus and Succulent Society) in 1987. It was named Notocactus crassigibbus by Friedrich Ritter in Succulenta in 1970.

Now a synonym, Parodia werneri Hofacker was named and described as such by Andreas Hofacker in Cactaceae Consensus Initiatives in 1998. It was “FIRST” named Notocactus uebelmannianus by Albert Frederik Hendrick Buining in Kakteen und Andere Sukkulenten in 1968 but when the species of Notocactus were transferred to the Parodia genus, there was already a Parodia uebelmannianus so the name was changed to Parodia werneri. But, apparently, they were already the same species anyway.

The genus, Parodia Speg., was named and described as such by Carlo Luigi Spegazzini in Anales de la Sociedad Cientifica Argentina in 1923.

Plants of the World Online lists 63 species in the Parodia genus (as of 12-23-20 when I am updating this page). Parodia is a member of the plant family Cactaceae with 144 genera. Those numbers could change as updates are made. 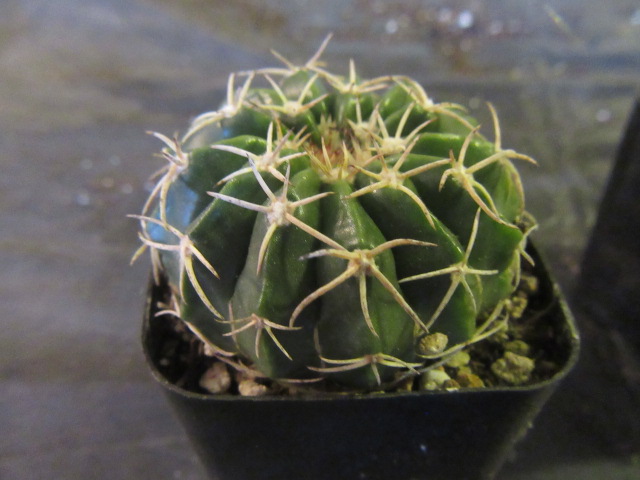 I purchased this neat little Parodia crassigibba from Succulent Depot on Ebay along with a Mammillaria senilis and Schlumbergera russeliana. The listing was for Parodia werneri but that name is a synonym of Parodia crassigibba, at least for now. It is also sometimes still sold under the name of Notocactus uebelmannianus. When the plant arrived it was only 7/8″ tall x 1 7/8″ wide so we have a lot of growing to do. I have two other Parodia species in my cactus collection and they have always done very well. You can click on their names, Parodia lenninghausii and Parodia magnifica if you want to view their pages.

Mammillaria crassigibba started out its life growing in somewhat rocky soil in the Rio Grande Do Sul area in southern Brazil. Minding its own business and getting along happily until its life was turned upside-down. The area started being converted into agricultural land for crops and grazing and now it is an endangered species. For many years, teams of researchers scoured the area naming and renaming many species of cactus. It was a disaster! 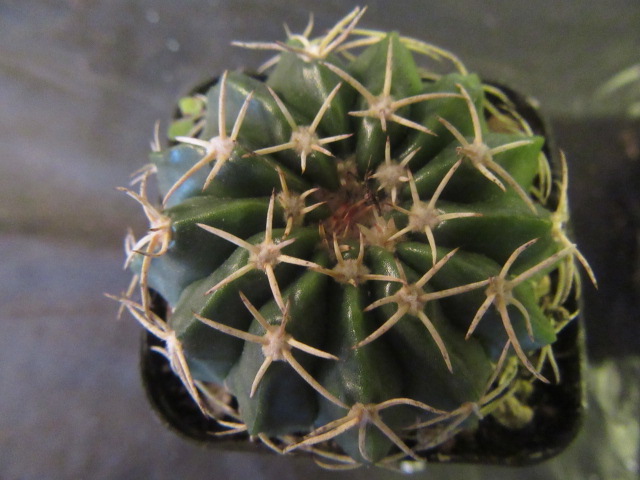 The name history of this plant is VERY complicated and confusing. The Parodia genus as a whole is very confusing but I am not going to get into that here. Basically, the 66 species currently in the genus were/are divided into several groups because of unique features and certain testing. Several genera and their species were moved to the Parodia genus and many of those species were already in the Parodia genus with different names. Not only that, MANY of the species were named in a MULTIPLE of genera with the same or different species names. ALL were considered accepted scientific names at the same time. I wrote down the synonyms of this plant in order by the date named and it was almost hilarious. This particular plant was originally named Notocactus uebelmannianus by Albert Frederik Buining in 1968. In 1970, Friedrich Ritter named the species Notocactus arachnitis (he also named a Notocactus arachnitis var. minor) and Notocactus crassigibbus. SO, then there were three accepted species in the same genus of the same plant. Then Mr. Ritter named Parodia uebelmanniana in 1980 WITHOUT considering it was the same plant Mr. Buining named in 1968 as Notocactus uebelmannianus. SO THEN, in 1998, when Notocactus was transferred to Parodia, there was already a Parodia uebelmanniana, so Andreas Hofacker renamed the species Parodia werneri… SO, in all, there were four species names (including Parodia meonacantha) and a subspecies of the SAME plant… EVEN after the decision was made to transfer several genera to Parodia was in the works, another guy comes along and writes a document establishing the genera Ritterocactus in 1999 and renames the three species and subspecies (of the same plant) Ritterocactus crassigibbus, Ritterocactus meonacanthus, Ritterocactus uebelmannianus, and Ritterocactus uebelmannianus subsp. pleiocephalus. Then, in 2004, two forms of Notocactus were named, and in 2013 a subspecies… ALL the same species… All are now synonyms of Parodia crassigibba…

I just can’t figure out how this plant wound up being named Parodia crassigibbus instead of Parodia werneri. Parodia werneri (1998) replaced the first name given to this plant in 1968, Notocactus uebelmannianus. Parodia crassigibbus (1987) replaced Notocactus crassigibbus (1970). Usually, the first name ultimately wins the prize. Well, I am not a taxonomist so I am not in the argument. Besides, there are 21 synonyms of the same species. You would think when they choose a name they would go for the one that is the easiest to pronounce. I think par-ROH-dee-uh WER-ner-ee is much easier to say than par-ROH-dee-uh krass-ih-GIB-uh. 🙂

This is one of the smaller growing species of globose shaped cactus. Mature specimens only grow to about 6-8″ tall (depending on which website you look at). The species grows 10-16 ribs (mine has 13) and has broad, chin-like tubercles between the areoles (Hmmm… That’s what the experts say, but I thought areoles grow on top of the tubercles…). It has 6-14 radial spines that are somewhat appressed and, if there is a central spine present, it points downward. You can actually pick it up without getting stuck. It is normally a solitary growing cactus, meaning it doesn’t normally grow in clusters, BUT sometimes it does. Hmmm…

I am sure the Parodia crassigibba will do well. I will continue adding more photos and information as time goes by.

I hope you enjoyed this page and maybe found it useful. If you have any comments, questions, or suggestions, I would like to hear from you. Please click on “like” if you visited this page. It helps us bloggers stay motivated. 🙂 You can check out the links below for further reading. The links take you directly to the genus and species of this plant. Llifle still has both species of Parodia listed as accepted, but photos and information are on the page for Parodia werneri. CactiGuide has photos and information for both species, but of course, P. werneri is a synonym of P. crassigibba. I am sure someday they will update but they are very busy and have a lot of plant names to keep up with. If you find that I have made an error, you can leave a comment or email me at thebelmontrooster@yahoo.com.