Cenchrus americanus (L.) Morrone is the correct and accepted scientific name. It was named and described as such by Osvaldo Marrone in Annals of Botany in 2010. This species was described as Panicum americanum by Carl Linnaeus in Species Plantarum in 1753.

The genus, Cenchrus L., was described by Carl Linnaeus in Species Plantarum in 1753. Plants of the World Online currently lists 108 accepted species in the Cenchrus genus and lists the genus Pennisetum as one of 16 synonyms (as of 3-4-19 when I last updated this page).

Plants of the World Online lists 59 synonyms of Cenchrus americanus (other species that were discovered to be the same species).

Pennisetum glaucum (L.) R.Br. is the correct and accepted scientific name for this plant. It was named and described by Robert Brown in Prodromus Florae Novae Hollandiae et Insulae van-Diemen in 1810. It was first described as Panicum glaucum by Carl Linnaeus in Species Plantarum in 1753.

The genus Pennisetum Pers. was named and described by Christiaan Hendrik Persoon in Synopsis Plantarum in 1805.

Most websites still use Pennisetum glaucum as the accepted scientific name.

The Cenchrus and Pennisetum genera are very closely related and species have been moved back and forth from time to time. The Wikipedia page says, “Authors recently proposed to transfer Pennisetum into Cenchrus, along with the related genus Odontelytrum.” Well, right now, if you click on Odontelytrum, it takes you to the Cenchrus page already but not Pennisetum…

Formerly, the Pennisetum species included various grasses and grains and is commonly referred to as the fountain grass family. The Cenchrus genus is a family of buffalo grasses, sandburs, and sand spur. In other words, members of one genus are loved and the other hated. 🙂 I hesitated to completely change the genus and species name on this blog because names keep changing back and forth and become synonyms of one or the other. But, since the name stuck for a while I decided to go ahead and change it. Keep in mind, just because many websites use the other names it doesn’t mean they are wrong. They can use whatever name they choose as long as they were validly published.

There are so many Pennisetum species and cultivars that have been very popular for so many years as ornamental grasses. Why go and change the name after everyone is so used to it? What is the difference between moving the species of one genus to another or leaving it the same? What is important is one species not having multiple names and being in multiple genera. I have more reasons but I will stop here. I am not a taxonomist, botanist or horticulturalist. I am just a gardener and blogger.

I bought my first ‘Purple ‘Majesty’ Ornamental Millet from Wagler’s Greenhouse in the spring of 2015. I have wanted to try these for many years, but pots at Lowe’s were always too expensive. Wagler’s has some larger pots, but they also have pots with just one plant which were much less expensive. I should have bought more than one, but then again, that would have cost just as much as one big pot.

Pennisetum glaucum, commonly known as the Pearl Millet, has been cultivated in western Africa for a very long time. Earliest archaeobotanical research confirmed evidence of “domesticated” Pearl Millet being grown in the Sahel zone of West Africa in northern Mali between 2,500 and 2,000 BC. Other species of Millets have been grown in Asia for the past 10,000 years. 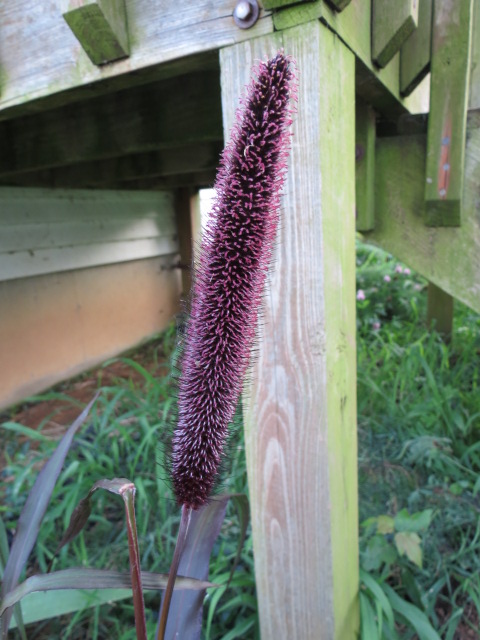 Besides being grown for human consumption, Millet is also popular as a bird seed…