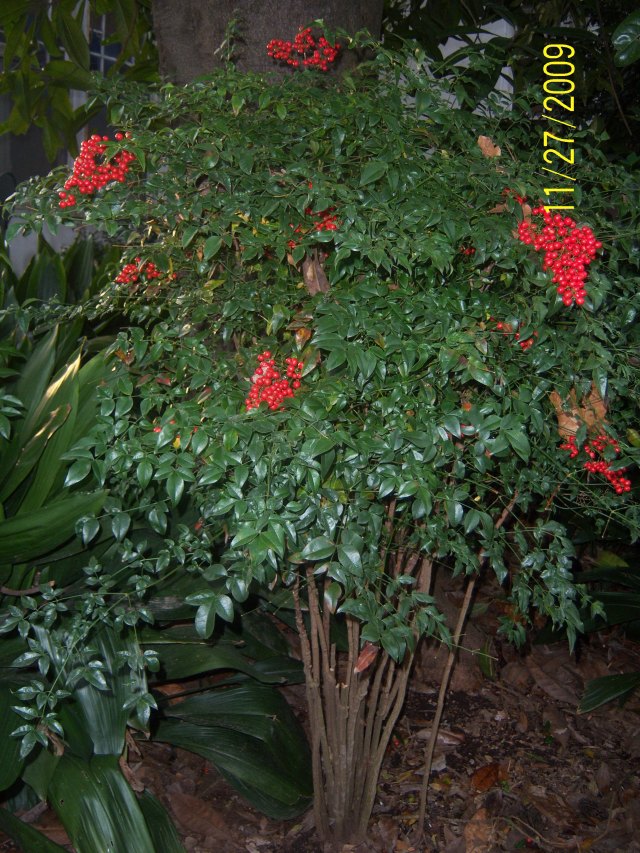 Nandina domestica Thunb. is the correct and accepted scientific name for this species. Both the genus and species were named and described by Carl Peter Thunberg in Nova Genera Plantarum in 1784.

As of 12-28-21 when this page was last updated, Plants of the World Online by Kew lists only one species in the Nandina genus. It is a member of the plant family Berberidaceae with 13 genera. Those numbers could change as updates are made on POWO.

I first met this AWESOME shrub when Dr. Skinner and I moved to the mansion she had bought in Leland, Mississippi in December 2008. She said they were Heavenly Bamboo so I looked them up online. It said Heavenly Bamboo were Nandina… I started my first blog titled The Mystical Mansion and Garden in 2009 and I thought for sure there were other Nandina species. Presently, Nandina domestica is the only accepted species in the genus.

I always pruned the Nandina by trimming the new growth which was easy because it was a different color. I am not saying that is the proper way to prune them, it is just the way I did it. I liked the way the mature plants looked and I didn’t want to change that. When I sold the mansion, the new owners cut the Nandina half off… GEEZ!!!

The dark green leaves with bright red berries are truly an amazing sight. The two-seeded berries are loved by several birds including the Titmouse. They make great winter decorations in bouquets and flower arrangements.

The red berries of Nandina domestica contain cyanide and other alkaloids that produce hydrogen cyanide (HCN), which can be poisonous to all animals.

Tom Oder writing for Mother Nature Network has this to say: “Nandina berries actually have a low toxicity, but they can be lethal to cedar waxwings specifically because their feeding habits differ dramatically from that of other birds, said Rhiannon Crain, project leader for the Habitat Network with The Nature Conservancy and Cornell Lab of Ornithology. “Other birds don’t eat as much or as rapidly as cedar waxwings,” said Crain. “Cedar waxwings completely stuff every possible part of their body with berries. They will fill their stomach and their crop with berries right up into their mouth until they can’t fit another berry inside of them.”

Information online states Nandina grows better in sun with afternoon shade. In the corner of the east sunroom, the only sun was when it was almost directly overhead. The rest of the time it was shaded by a HUGE Magnolia and the mansion.

After I sold the mansion to a group who remodeled it and turned it into The Thompson House Bed and Breakfast, dad asked me to move back to the family farm in mid-Missouri. He was getting older and he and mom had been pretty ill and he wanted me to help with the farm. I explained to him I had a lot of plants. He just said, “Yeah” but he was very hard of hearing. He had no clue what he was saying or maybe even what I meant. I had to give up several hundred potted plants but I brought most of the succulents, Colocasia esculenta and Alocasia, and several other plants. I brought several perennials and a small Nandina domestica. There was no way I wasn’t going to bring at least one and I wish I had brought more. 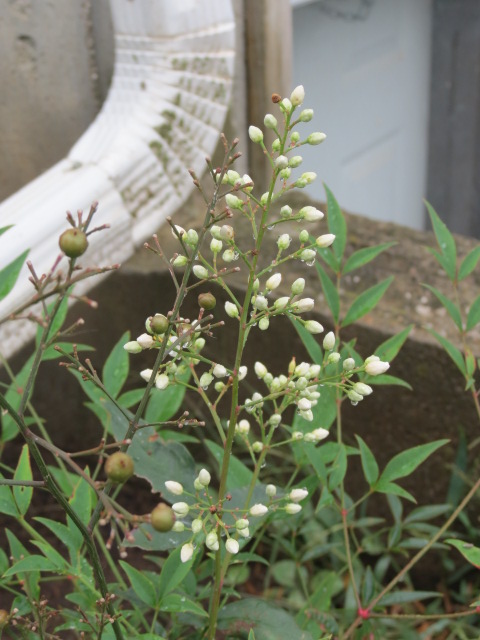 I was very glad to see the Nandina I brought with me produce flowers. They flower best in groups, so I wasn’t sure what would happen.

The Nandina did very well and had this nice growth spurt in 2014. The Heavenly Bamboo spreads by rhizomes and is declared as an invasive species in some states. While there were large groups of it in several locations at the mansion in Mississippi, I wouldn’t say that it exactly invasive there. Well, I suppose if you really like something it would never be invasive. The more the merrier… 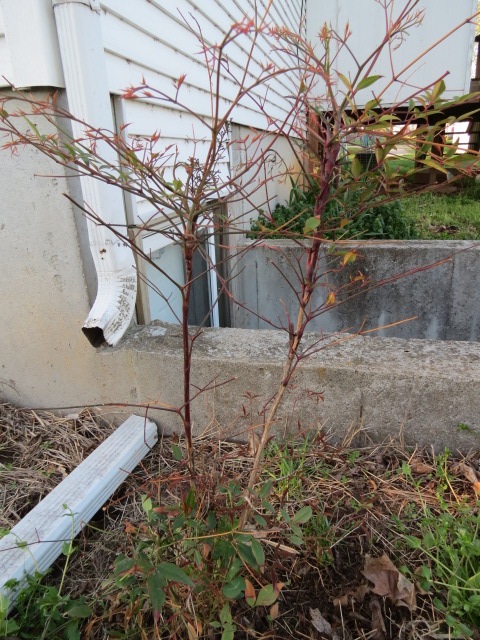 YIKES! The Nandina lost most of its upper leaves over the winter but luckily it started growing new ones once the temps started warming up. We are definitely on the borderline as far as hardiness zones are concerned.

Once again, it is starting to bud. 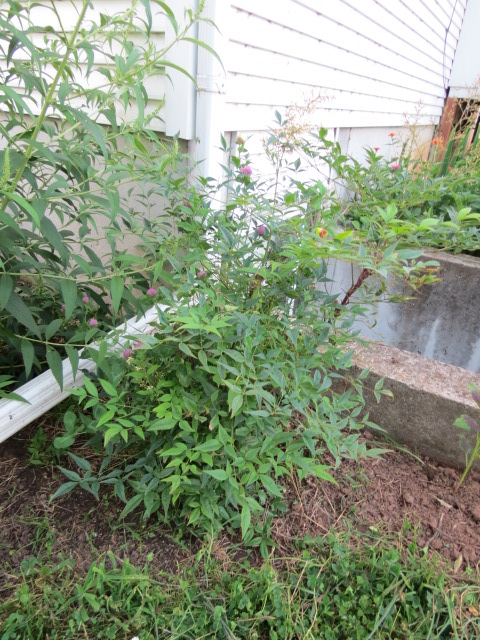 The Buddleja ‘White Profusion’ got WAY too large and tried its best to cover the Nandina as the summer progressed. I may have to move something…

For some reason, I didn’t have any photos in the album of the Nandina for 2016. I think it was because the Buddleja didn’t go completely dormant over the winter so I didn’t cut it back then it grew really HUGE. It all but covered the Nandina… From now on I will cut the Buddleja back even if it doesn’t die back. The above photo shows how it started growing sideways because of it.

2017 was a much better year, though. The Buddleja died back over the winter which gave the Nandina a chance to grow and straighten up.

It is always good to see the Nandina flowering. I wish it would spread a little faster so there will be more. 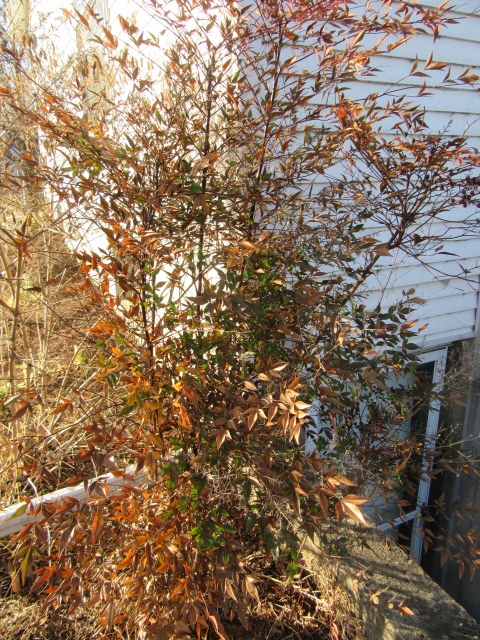 January in 2018 was very cold with -10° F a few days in the first week. I was hoping the Nandina survived. 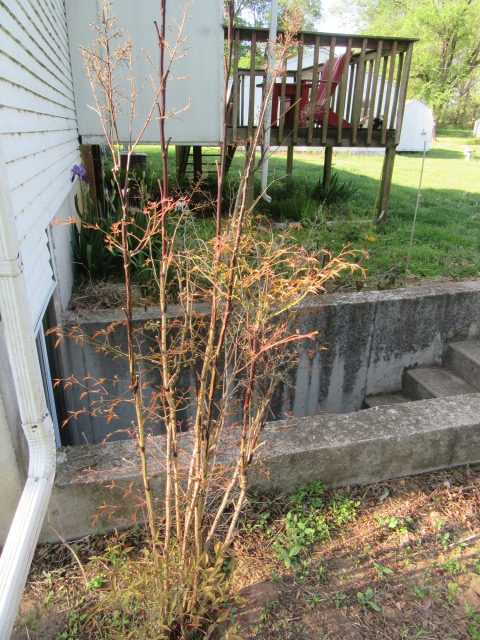 I was glad when new growth appeared. I was beginning to wonder if the top part had died so I was relieved when it started leafing out.

When I was browsing on the Missouri Department of Conversation website, I noticed they have Nandina domestica as a Missouri native (see link below). Hmmm… 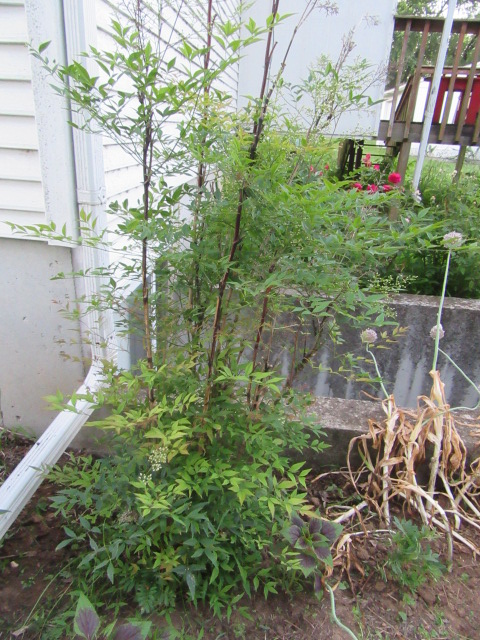 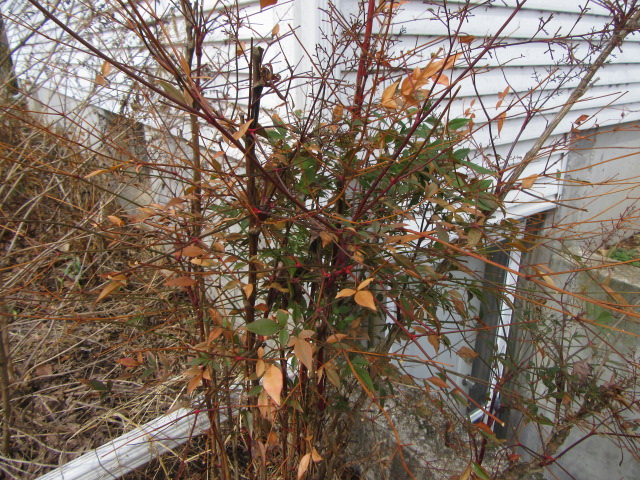 The winter wasn’t so bad, so a lot of the leaves on the Nandina remained green. Spring is just around the corner and soon it will be growing new leaves.

Loaded with lots of flowers…

Lots of flowers are followed by lots of berries…

After a few ZAPS and cool temperatures, most of the leaves fall off of the Nandina. The berries persist until they eventually fall off.

As I may have already mentioned, Nandina domestica is my favorite shrub.

The Nandina domestica is still alive and well. I didn’t was fairly busy in 2020 so I didn’t take many photos of the plants around the house. I will try to do better in 2021.

I read this humorous article on the Southern Living website by Steve Bender titled “Just Try To Kill Nandina“. Personally, I removed a good-sized portion of Nandina at the mansion to make way for my potting area and a new flower bed. It took several days but there were never any problems with it coming back. They also have this article that lists several cultivars