Agave americana subsp. protoamericana Gentry is the correct and accepted scientific infraspecific name for this subspecies of Agave americana. It was named and described by Howard Scott Gentry in Agaves of Continental North America in 1982.

The genus, Agave L., was named and described as such by Carl von Linnaeus in the first edition of Species Plantarum in 1753. According to Plants of the World Online there are 269 accepted species of Agave. Many species of other genera have been moved to the Agave genus, such as Manfreda. Plants of the World Online lists 21 synonyms at the genus level. Those were the numbers listed on 1-15-20 when I am updating this page but those numbers could change.

I bought this Agave species from an Ebay seller in 2009. It was listed as Agave americana ‘Blue Monster’. He actually sent me two pups. I didn’t take a photo of the smaller one until 2011.

We made it through our first winter together and the above photo shows it in the backyard of the mansion for the summer of 2010. 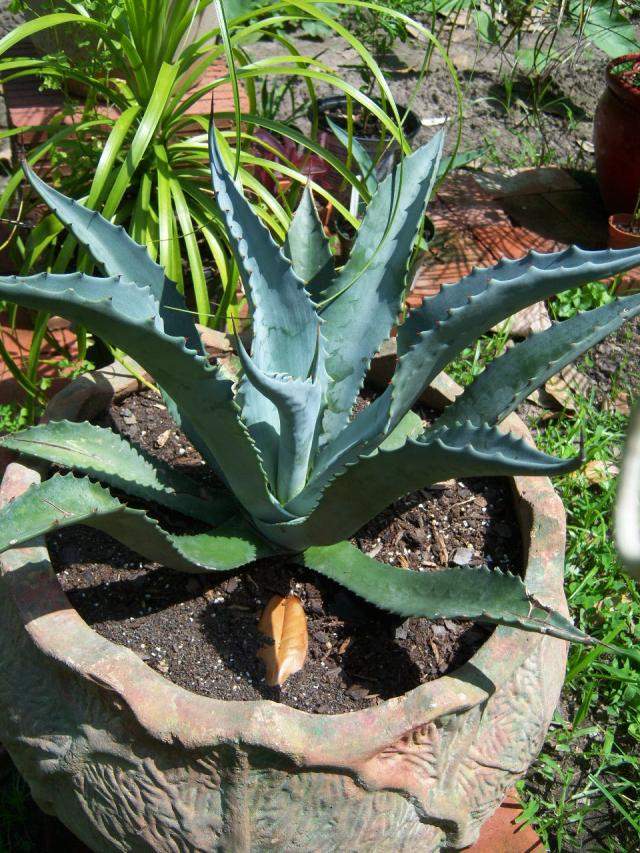 *Agave species are very easy to grow in the ground where they are cold hardy as well in pots where they are not. There are a lot of potting soil recipes online and many people develop their own with experience and what is readily available. Read the ingredients on the bag and always start with a base of a reliable brand name potting soil. I always use either Miracle Grow or Schultz Potting soil because I can buy it in large bags. They also offer cactus soil in smaller bags with similar ingredients. I used 2 parts potting soil with 1 part additional perlite and 1 part chicken grit. After reading that cactus and succulent enthusiasts were recommending pumice in place of perlite and grit, I decided to try it. So, in late in 2018 I purchased a bag of pumice online from General Pumice. I have been using a combination of about 50% potting soil and 50% pumice with favorable results.

I was excited when I saw that after only a year this plant had its first pup. Little did I know what was to follow.

By now, this plant, as well as #2, have produced MANY pups. I learned that decorative pots look amazing, BUT… Getting pups out of this pot was insane. The runners that would grow away from the plant if it were in the ground wrapped around the pot. Not to mention the thought of removing this big plant from this pot. The beautiful pot would probably have to be broken. SO, I just left it in the pot. I did repot #2 and it had also been in a slightly curved pot. My neighbor helped me get it out and I knew that I had to put it in a straight-sided pot after the ordeal.

Sometime during the summer of 2011, a friend (Kyle Hall) and I went to a K&K Nursery in Cleveland, MS to pick up some bamboo stakes and the owner had this HUGE Agave and said it was an Agave americana. It was completely different than mine and he gave me a couple of pups… The difference between the two sparked my curiosity so I took photos of the plants and leaves and sent them to Tony Avent of Plant Delights and Cheryl of Highland Succulents. Both told me that my original plant, the one from Ebay, was in an Agave protoamericana, which is a subspecies of Agave americana. It is properly called Agave americana subsp. protoamericana. 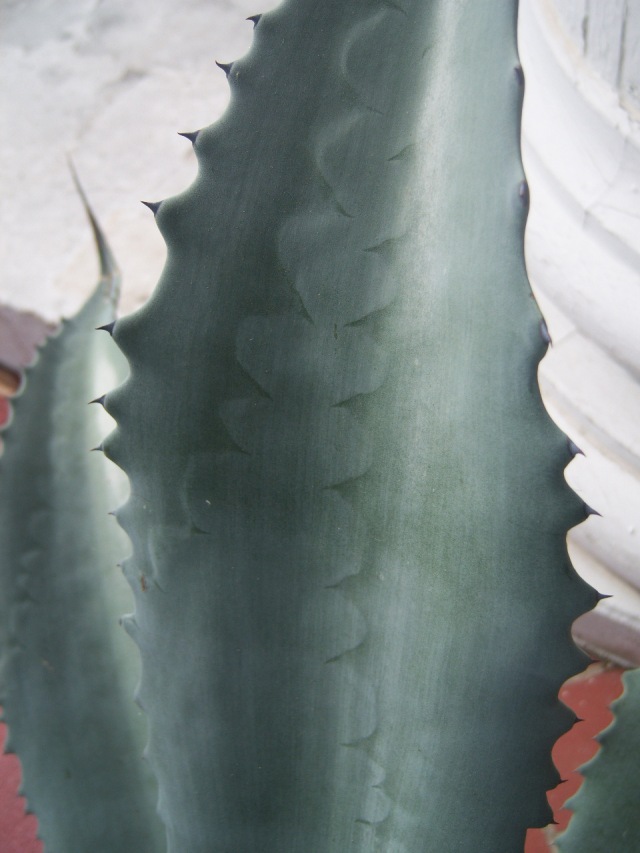 Agave americana subsp. protoamericana photo showing the underside of a leaf. This photo was taken on 10-11-11, #81-5.

The above three photos were the ones I took and emailed to Tony Avent of Plant Delights and Cheryl of Highland Succulents for identification. The first photo is to show how the Agave grows, and the second and third were to show the leaf pattern and striations on the leaf. When a new leaf emerges, it is so tightly wrapped that it leaves the pattern on the leaf. The Agave americana has smooth lines which are shown on its own page here. 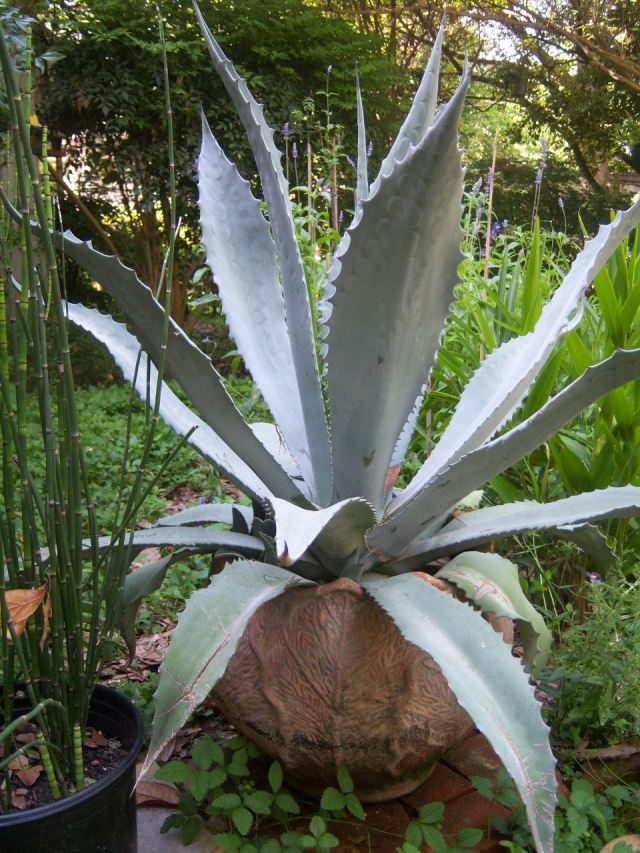 Now, folks, I have to tell you that although many Agave species, including this one, were cold hardy in Leland, Mississippi. I saw MANY Agave growing in other yards and along the road here and there and some were HUGE!!! I kept mine in pots because I was not sure how long I would be at the mansion. The estate was in probate.

Every fall when the temps got cooler, I moved all the plants into the sunrooms on the first floor. This was very tricky with the large Agave. I learned how to do it by myself, but in the spring of 2012, I decided to get some help. I went to one of the neighbors behind me, (Cat Man was his nickname) who had told me before that he would help anytime. Well, I knew he was usually half drunk, so I was somewhat reserved about it. BUT, there were two other guys visiting him and they didn’t appear to be drunk. SO, they all three came with me back to the mansion. We loaded a cart with plants and took it to the front porch. When we were ready to move the Agave. The other two guys grabbed hold of the pot on either side like I showed them and Cat Man put his arms around the WHOLE plant. I bet he won’t do that again! I will never forget that or how Cat Man and I first met…

OK, I will tell you how… One day, maybe 2009 or 2010, I was working in the backyard. I had left the side gate open because I was in and out. I had a CD playing inside the den and the back door was open. I looked toward the house and there was this man standing by the door dancing… I am not racist and never mention someone as “this or that black guy.” But, he was an African American and he introduced himself as Cat Man. He was also drunk. Umm… There was another man in Leland, also African American, whose nickname was Cat Man, too. He was a blues singer.  Over the years, I made many friends in Mississippi, the majority were African American… Thinking back, maybe the neighbor wasn’t Cat Man… GEEZ! How could I forget? Impossible… His nickname was Cat Man.

As you can see, there is also a pot of Equisetum hyemale (Horsetail) in a pot to the left of this Agave. They were given to me by Augustine Taylor in 2010, a resident of Leland, Mississippi. She had a HUGE, HUGE Agave americana ssp. protoamericana in her front yard with a flower (anyway, it looked like mine). That’s what caught my eye at first then I saw the Equisetum in her yard. I knocked on her door and told her I was admiring her Agave and noticed she also had Horsetail. She eagerly told me I could have all the Horsetail I wanted… What an adventure!!! I am thinking I took her a plant of some kind, but it has been 7 years ago and I am not sure. I don’t know if she knew her Agave would die since it flowered and I certainly wasn’t going to break the news to her.

I kept #2 on a wall along the driveway at the mansion. It measured 23″ tall x 38″ wide when the above photo was taken on 7-2-12. As you can see, there are MANY pups that needed to be removed. 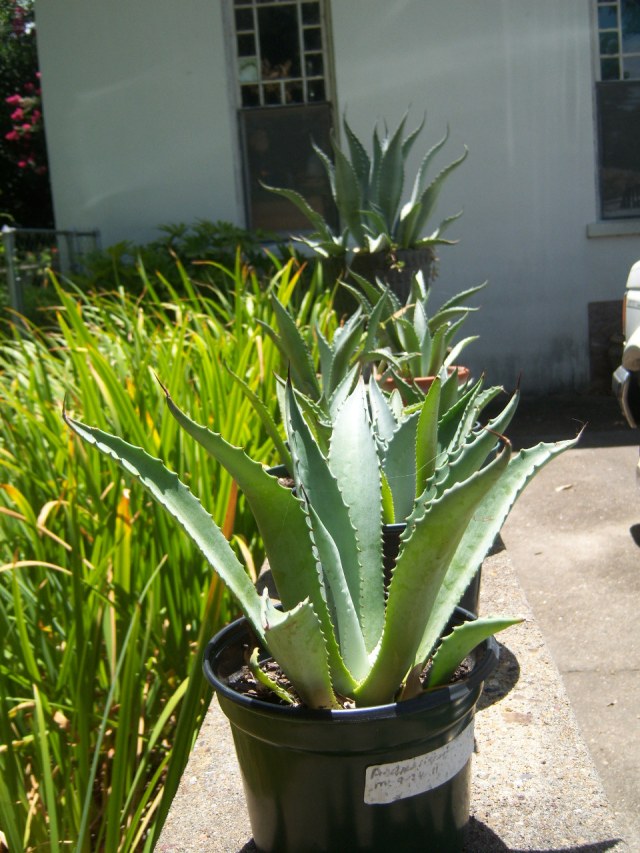 I lined all the pups up on the wall, actually, there was another wall on the other side of the driveway with more.

After the estate was settled at the mansion in Mississippi, my dad asked me to move back to the family farm in mid-Missouri. He was getting older (83 at the time) and mom wasn’t well. SO, after I sold the mansion, I moved back to the farm in February 2013. I had to give up hundreds of plants including all my Agave americana ssp. protoamericana except the one in the above photo.

It did very well here in Missouri and even started sending up offsets.

As hard as it was to imagine, the Agave did very well in the basement over the winter. It was around 60-65 degrees and very low light but they did fine.

I gave up this Agave but someday I will get another Agave americana ssp. protoamericana. Why? Because they are AWESOME plants. If you have space, and the right location, these are impressive! Keeping them in pots is not a good idea, though. It is Ok for smaller species and cultivars, but not Agave that get this HUGE. You can somewhat control their size in a pot, but the plant will not be impressed and having to move them is very tricky, especially if you have to move them inside for the winter (worse if you have to go up and down steps like I did).