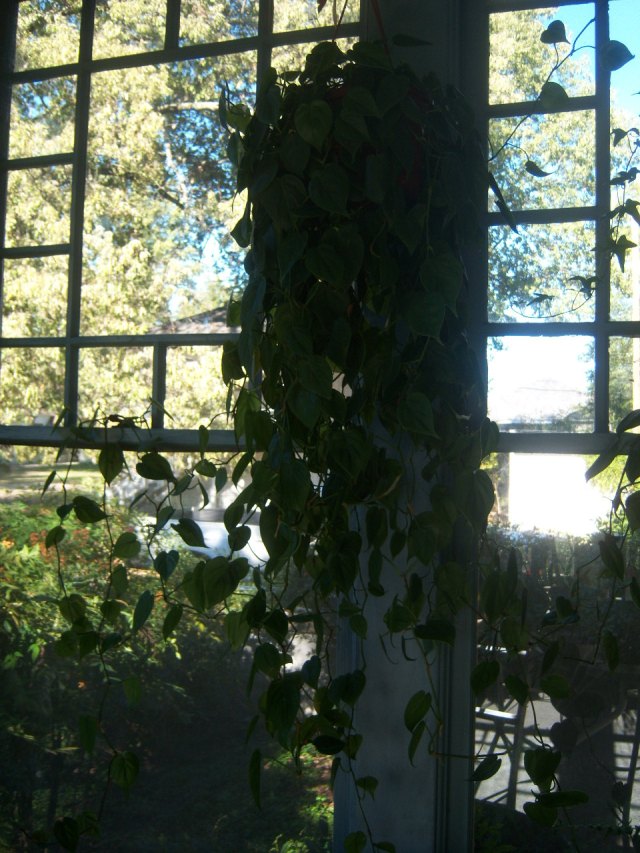 Philodendron hederaceum (Jacq.) Schott is the correct and accepted scientific name for this species of Philodendron. The genus and species were named ad described as such by Heinrich Wilhelm Schott in Wiener Zeitschrift für Kunst in 1829. It was first named Arum hederaceum by Nicolaus Joseph von Jacquin in Enumeratio Systematica Plantarum in 1760.

Plants of the World Online by Kew lists 563 species in the Philodendron genus (as of 8-16-21 when I last updated this page). It is a member of the plant family Araceae with 140 genera. Those numbers could change as updates are made. 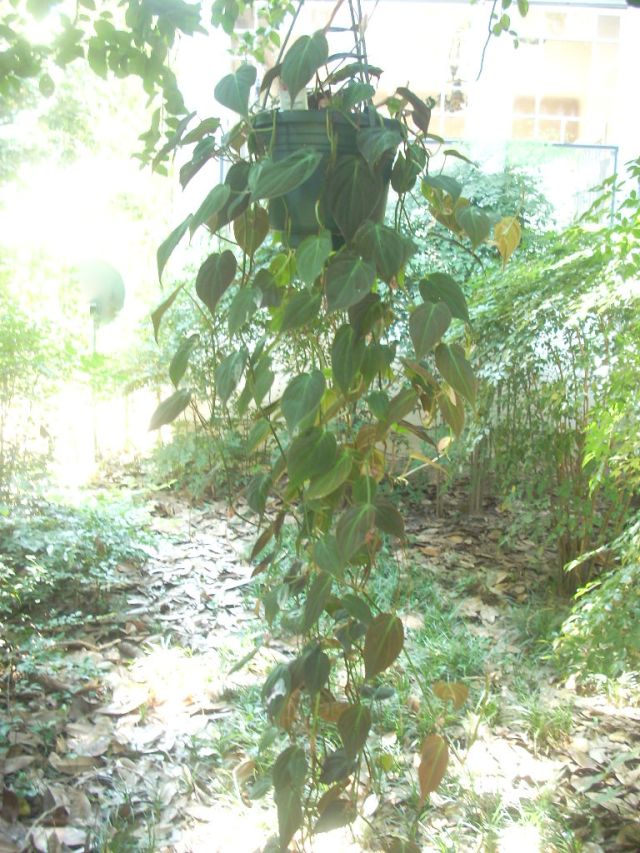 Philodendron hederaceum var. hederaceum hanging in the Ligustrum three in the backyard at the mansion on 8-12-12, #115-75. I was borrowing a friend’s camera and didn’t realize the brightness setting hadn’t been set.

Over the years, botanists and collectors have argued about the actual name for this plant. Originally, Mr. Jacquin named the species Arum hederaceum in 1760, but it was definitely not an Arum. Oh, it was an Aroid alright, just not an Arum. Then, in 1829, it was given its proper name Philodendron hederaceum. The deal with Philodendrons and many other aroids is that no two leaves are alike. Not only that, but they can be quite variable from one plant to another. Plus, as Philodendrons mature, they change even more. Their leaves become MUCH larger than anyone could imagine from a houseplant. The plants we grow as houseplants are in their juvenile form and even if the same plant survives for many years, it will always be in this form as long as it is in a pot. These differences from plant to plant led botanists and collectors to believe there were several different species. Even though it has been proven that Philodendron scandens, Philodendron micans, Philodendron oxycardium, etc. are all the same species, many still disagree. 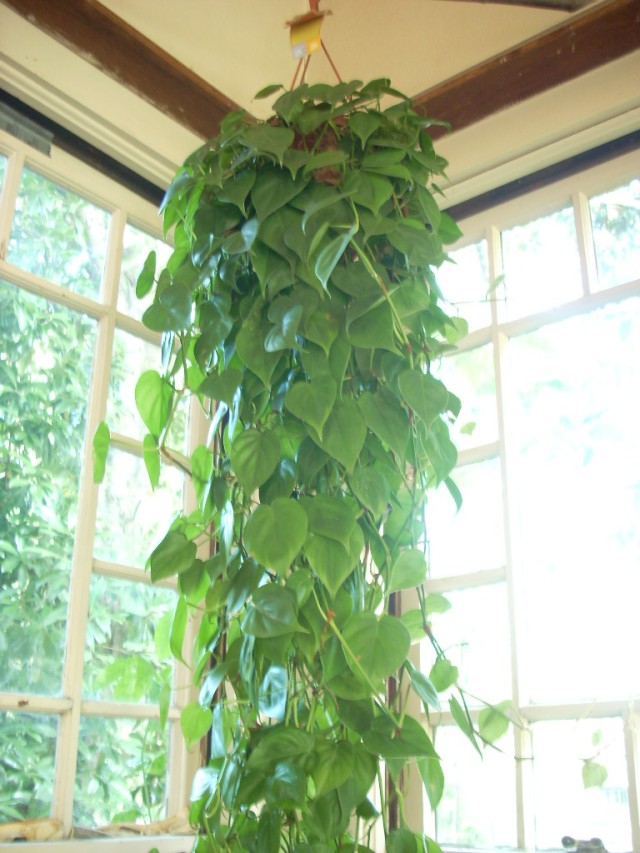 As soon as temperatures allowed, I would take the potted plant outside. I always hung the two Philodendron hederaceum in the Ligustrum tree in the backyard. The green-leaved form grew much faster and fuller than the other and I had to keep hanging it higher in the tree. 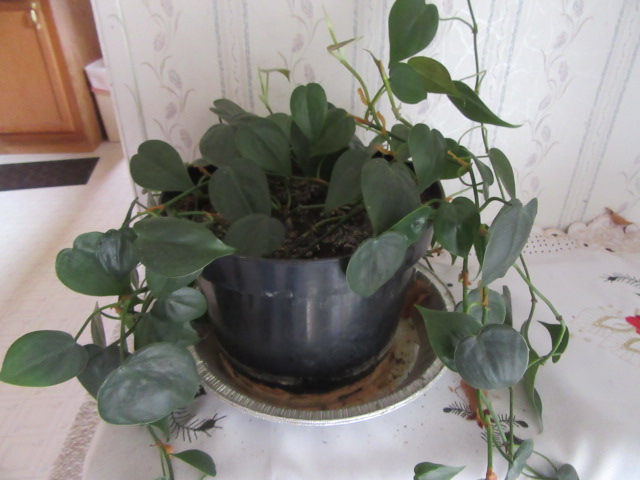 After I sold the mansion in Leland, Mississippi, dad asked me to move back to the family farm in mid-Missouri. I had to give up around 200 potted plants including the two Philodendrons. Mom and dad had one that they brought home from mom’s cousin’s funeral. It didn’t look very well and one day dad asked me to do something with it. I told him that in order for these plants to do well, they need to hang. So, I unwrapped the stems that were wrapped around the pot and let them hang over the edge of the bookshelf it was on. It didn’t take long for it to take off after that. Now I have one stem hanging over a nail on the wall.

There is another plant that many people mistake for a Philodendron, which is also a popular “funeral” plant. Commonly known as the Pothos, the Epipremnum aureum, is also quite variable and caused the same confusion with species names. Finally, after MANY YEARS, a flower was found which solved the mystery. The link above takes you to the page on this blog about the species.

The tips of the leaves of the Philodendron hederaceum are different than the Epipremnum aureum. They are more pointed and somewhat “cupped” which is believed to help water drain off the leaves. 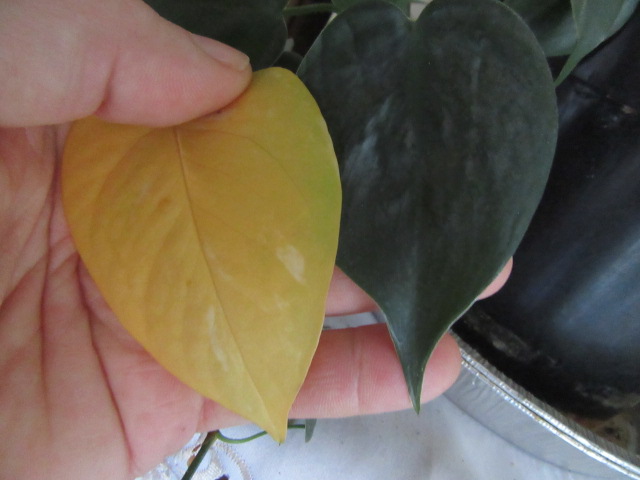 The yellow color of the Epipremnum aureum leaf is not what they normally look like. It was a leaf that was dying and needed to be removed. The photo shows the difference between the two plants.

The link to the Exotic Rainforest below is a good article to read and gives a very good explanation of the many names. For the industry, however, the more names they can use, the more plants they can sell. So, although you see plants at the garden center, florist shop, etc. with different leaf colors, some being all free, some with reddish undersides or a velvety appearance, they are all the same species, Philodendron hederaceum, no matter what the label says.

I did notice when I was making this page that Costa Farms (Exotic Angel Plants) has changed the names on their website. They have named the green-leaved form Green Heartleaf Philodendron and they have the species name correct. WOW!!! The other one they have named Micans Philodendron and have the species as Philodendron hederaceum micans. Well, at least they got one right. They have another one they are calling ‘Brasil’, which they say is a patented name. That plant is actually Philodendron hederaceum var. oxycardium, which is an accepted infraspecific name whether they have a patent on a cultivar name or not.

I think I may see if there are some other Philodendrons available from Lowe’s. Never know, maybe there is a piece laying on the floor that needs to be rescued. 🙂