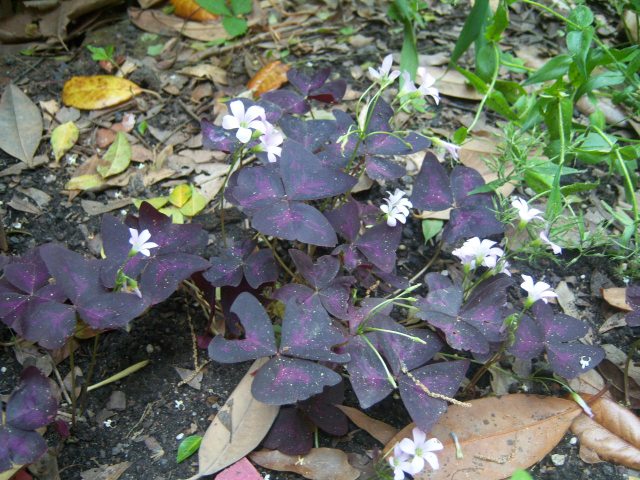 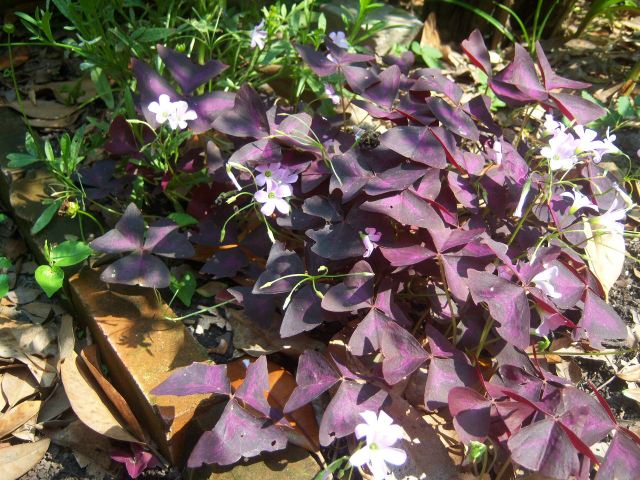 Oxalis triangularis A.St.-Hil. is the correct and accepted scientific name for this species of Oxalis. It was named and described by Auguste François César Prouvençal de Saint-Hilaire in Flora Brasiliae Meridionalis in 1825.

This species was also named and described as Oxalis regnellii Miq. by Friedrich Anton Wilhelm Miquel in Linnaea in 1845. It was later decided it was a synonym of Oxalis triangularis.

Plants of the World Online lists a WHOPPING 547 accepted species of Oxalis as of March 2 when I updated this page. There were 551 accepted species in the genus when I previously updated. There are species native to most parts of the world in many different climates. One of the most common Oxalis species growing just about everywhere I have lived is the Oxalis dillenii which I have been nibbling on since I was a barefoot little kid 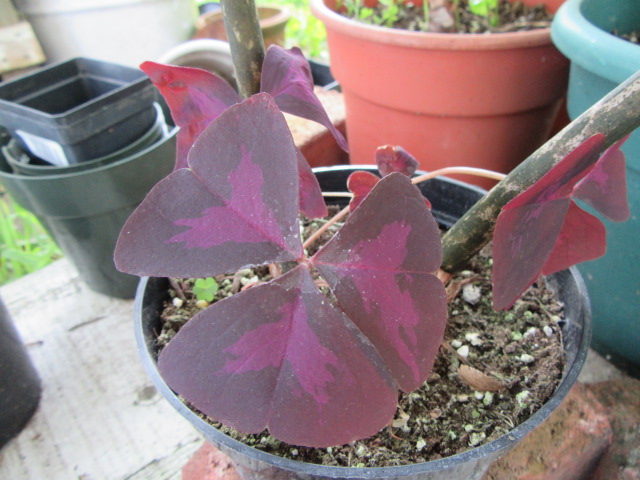 When my sister and niece came down to do some plant shopping on July 1, 2017, I took them first to Wagler’s Greenhouse. I found she had a few Amorphophallus and she said I could have one (we do a lot of plant trading). I picked out a pot which also had an Oxalis triangularis growing with it. You know, for so long I have been missing something since I came back to the farm… I missed my Oxalis triangularis from Mississippi and had often thought about them. I was very glad to now have another one. 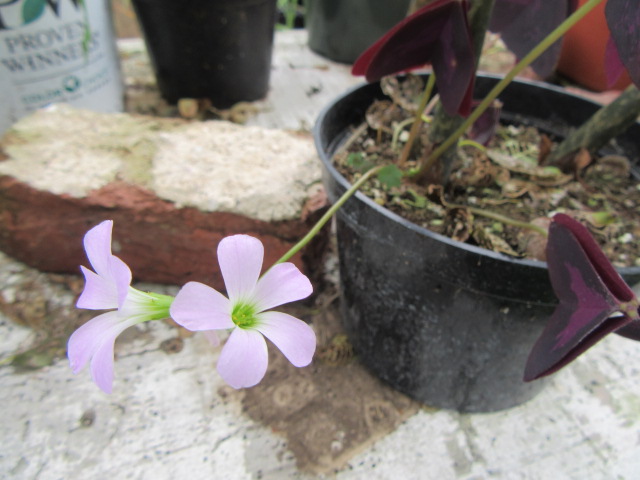 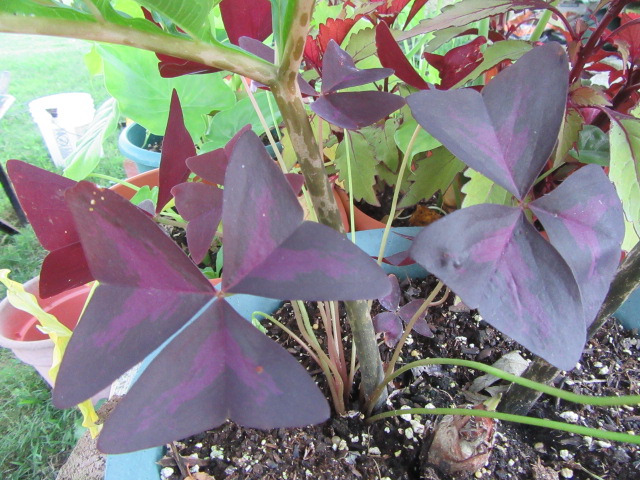 Oxalis triangularis subsp. papilionaceae (Hoffmanns. ex Zucc.) Lourteig is the correct and accepted infraspecific name for this plant. It was named and described by Alicia Lourteig in Flora Ilustrada Catarinense in 1983. The basionym, Oxalis papilionaceae Hoffmanns. ex Zucc., was named and described by Johann Centurius von Hoffmannsegg and Joseph Gerhard Zuccarini in 1825. The name of the publication is Denkschriften der Königlichen Akademie der Wissenschaften zu München. I’m serious.

Although Plants of the World Online by Kew list Oxalis triangularis subsp. papilionaceae as a synonym of Oxalis triangularis I am sticking with the subspecies. That is legal. 🙂 As long as you use a name that was validly published apparently you can use any name you choose. Well, it has to be reasonable. You shouldn’t use a species name that has nothing to do with the plant. The reason I am continuing to use the subspecies name is because it is definitely different than the species. I may not have realized that unless I had grown both. The subspecies is definitely larger and can grow up to 20″ tall with MUCH larger leaves.

Plants of the World Online list 20 synonyms of Oxalis triangularis which includes this subspecies. I think at some point they will also be in agreement so I am already ready. 🙂 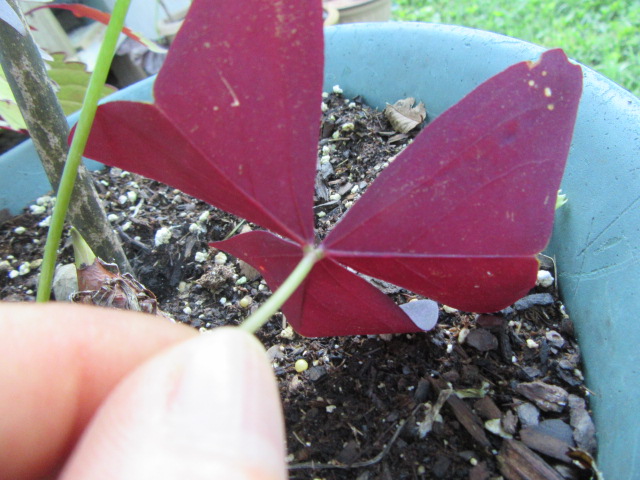 USEFUL INFORMATION:
Family: Oxalidaceae
Origin: Central and western South America
Zones: USDA Zones 6b-11 (-5 to 40° F)
Size: 6-12”
Light: Light to part shade
Soil: Well-drained soil. Prefers not to dry out all the way.
Water: Average water needs. I think it likes water when the top of the soil becomes dry. Do not overwater. 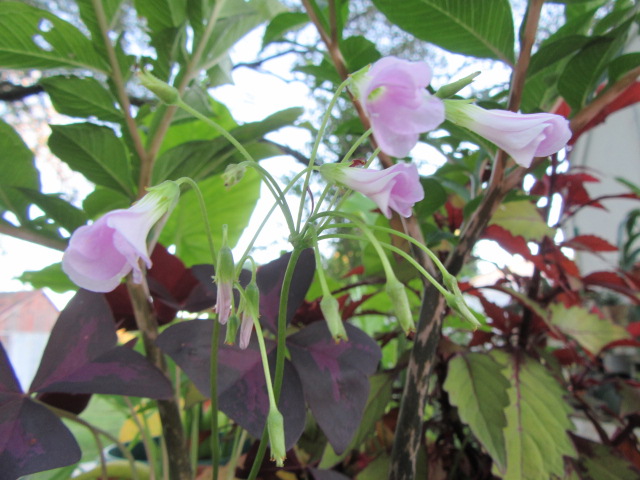 Not only do the flowers close up in the afternoon, but as it gets darker, the leaves fold downward and inward.

This plant has weird dormancy issues that can drive a person nuts. If your plant dies, don’t throw it out… Remove the dead leaves then after a few weeks give it a little water and it may come back up. It is one of those “just because it is dead doesn’t mean it is dead” plants. Some information online says it just needs a few weeks of dormancy off and on. Well, mine shot craps before I bought the plants inside and I have seen no trace of it.

I also found out this plant can be grown as a houseplant. I could possibly attempt to do a little digging in the Amorphophallus pot and see if I can find the bulbs for the Oxalis… Or maybe I will just wait until spring and see if both will return.

After the Amorphophallus went dormant and I bought the plants inside, I started digging around in the pot to find all three “bulbs”. At the time, I didn’t realize the Oxalis also grew from bulbs. So, no telling if the Oxalis will come back up. As usual, we shall see. 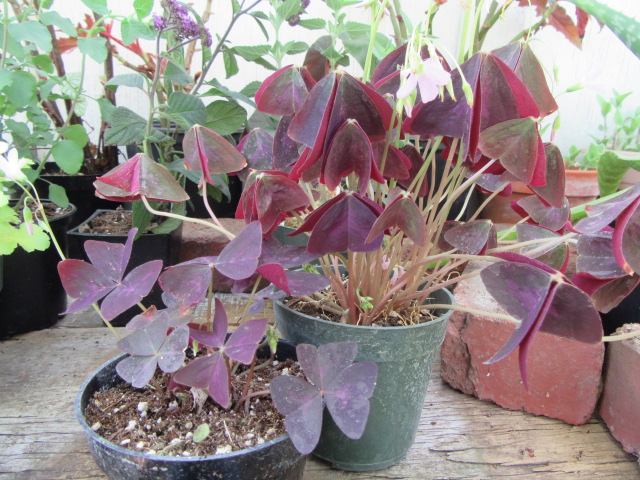 My sister and niece came down from the city to go plant shopping at the four local Amish greenhouses on May 5 (2018). We went to Wagler’s first since they are on the southeast side of town and because they are our favorite. We looked around a bit, then I went to my favorite section where Mrs. Wagler keeps her plants she shares with others. I found several pots of Oxalis triangularis subsp. papilionaceae and decided I would pick up a couple of pots in case mine didn’t come back up. I told her, “You can never have too many Oxalis.’ I am trying to teach her scientific names, but she just looks at me and smiles.

The bigger pot has a really nice cluster and the smaller only has a few. NICE! 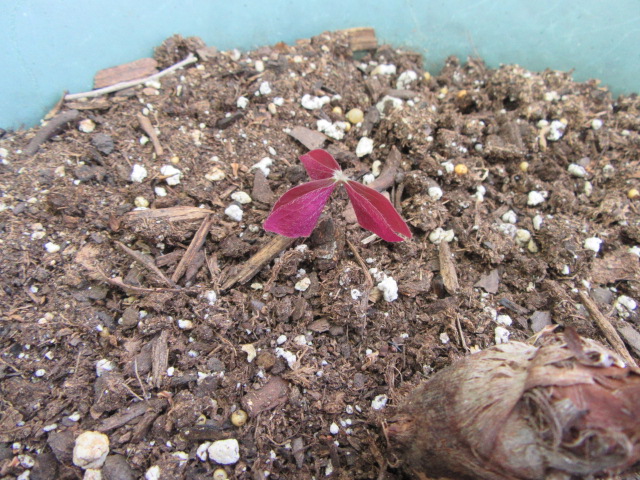 When I was putting the plants I had bought on the plant tables behind the shed, I noticed the Oxalis triangularis subsp. papilionaceae was coming in the pot with the Amorphophallus. Like I said, you can never have too many Oxalis. 🙂 Now, when is the Amorphophallus going to come up? 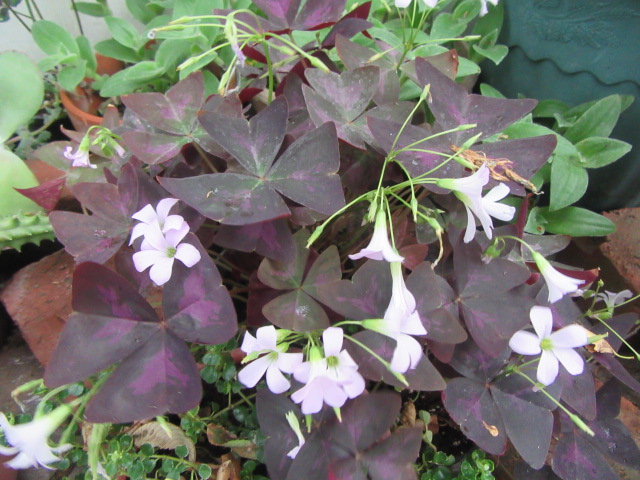 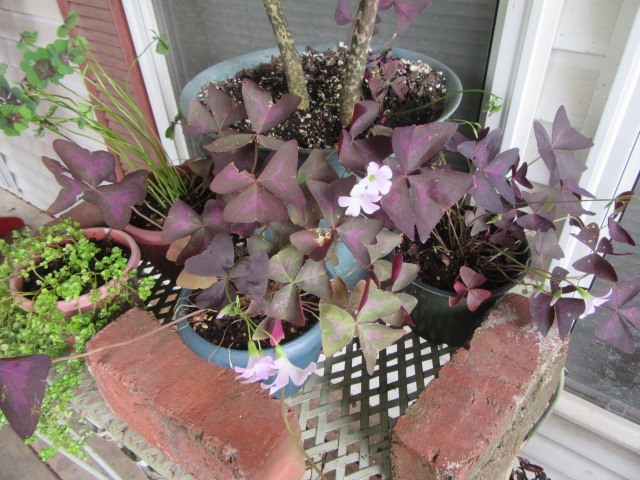 I had to move the potted plants by the shed to the front and back porches of the house on July 4 because of a Japanese Beetle invasion. It was much worse in 2018 than in 2017. The plant tables were under a Chinese Elm tree that the beetles love so the environment completely changed. 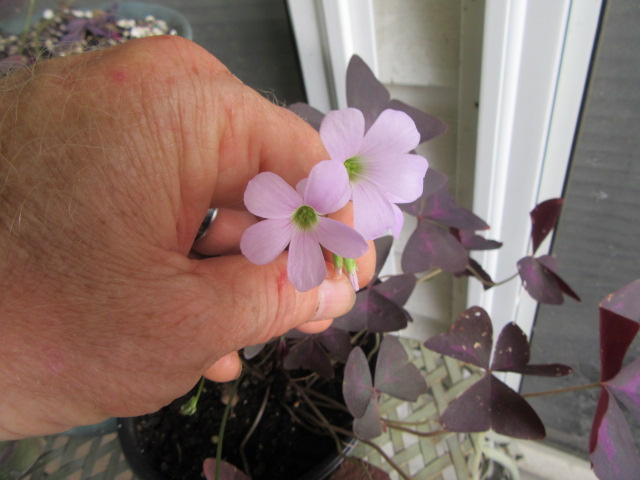 I am not a pink person but I suppose I just have to go with it, huh? 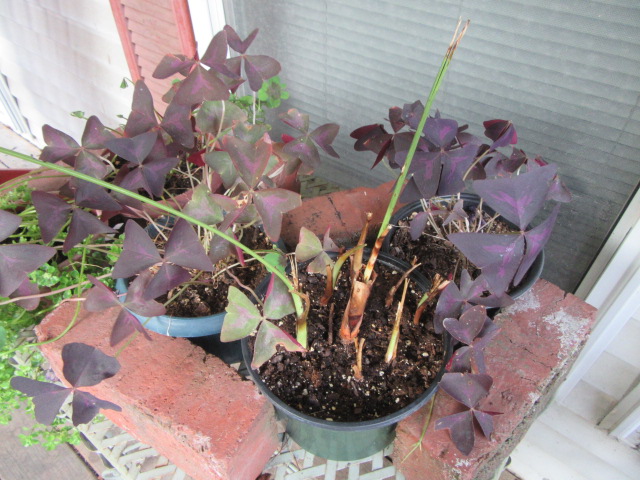 I moved the Oxalis around a bit to find the “just right” spot. The front porch has a roof and faces west so the light can be a bit tricky. The plant tables are along the front and south side of the porch so plants that don’t need as much light can go along the wall.

The pot of stems belongs to a friend who said he was having problems with his “fern”. He said it was from his mother’s funeral so it has sentimental value. He said he kept it watered because he knew ferns needed plenty of moisture. He asked if I could look at it and work my magic. So, I went to his home and right off the bat I knew there was an issue. I told him the biggest problem with his fern was that it was a Parlor Palm. I took it home and trimmed off the dead and repotted the “stems” even though I thought there was no hope. Never know… 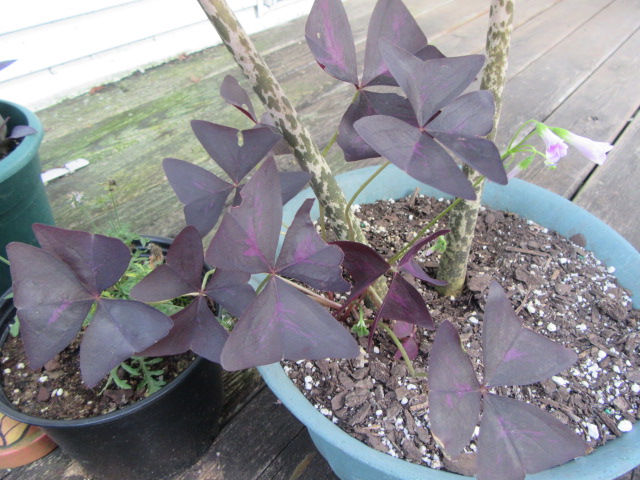 I had the pot of Oxalis with the Amorphallus on the north side of the porch where there was no room. I am not sure why it was built that way but it made a good place for plants that needed a little more light. 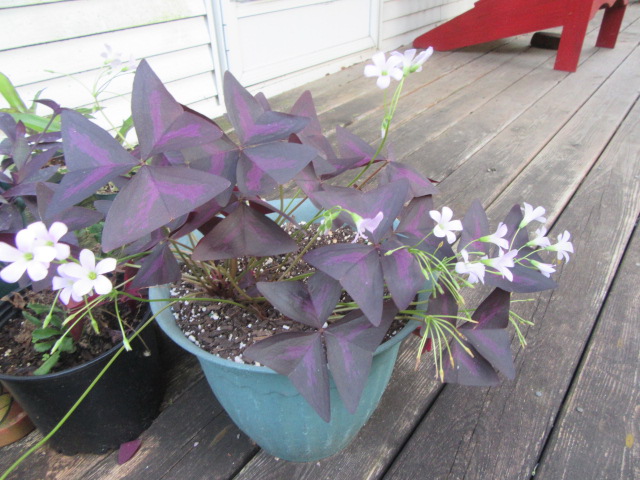 I think the Oxalis needed more sun than on the table along the wall because they grow more upright. Not enough light and they tend to sprawl. 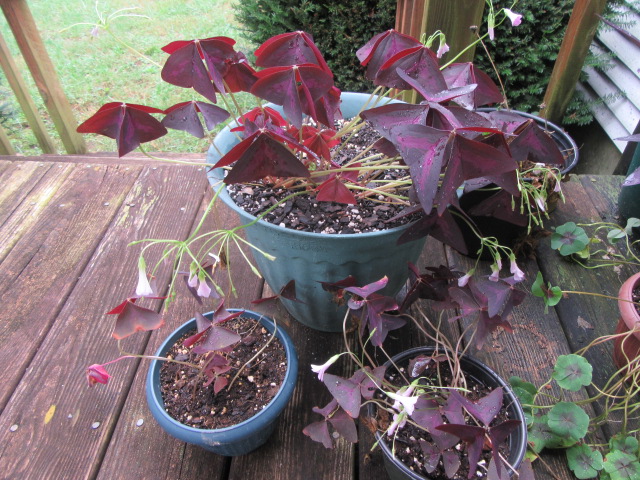 I had to start moving the potted plants inside for the winter on October 10. Instead of putting the Oxalis in the basement so they could go dormant, I put them in the front bedroom. It is always neat how the leaves fold up in the late afternoon/early evening. 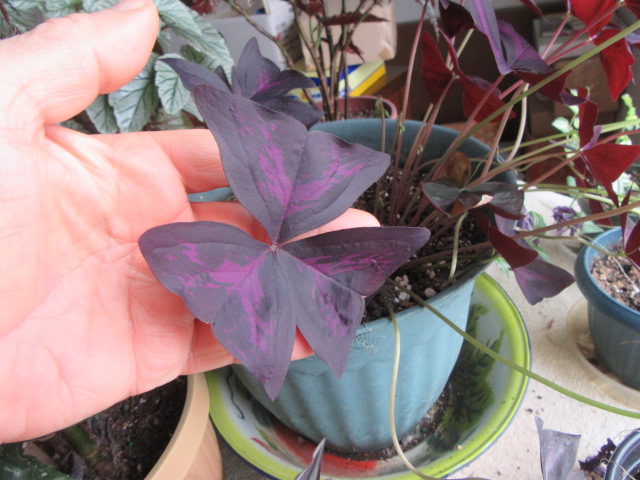 All of the Oxalis went dormant in the front bedroom because I withheld water so they could. The front bedrooms don’t et much heat, so it was a nice cool place for dormant bulbs. Of course they are in the dark because the rhizomes are under the soil. Strange thing is, they all went dormant as expected EXCEPT the ones in the pot with the Amorphallus (also dormant). They kept growing and flowering despite the lack of water… 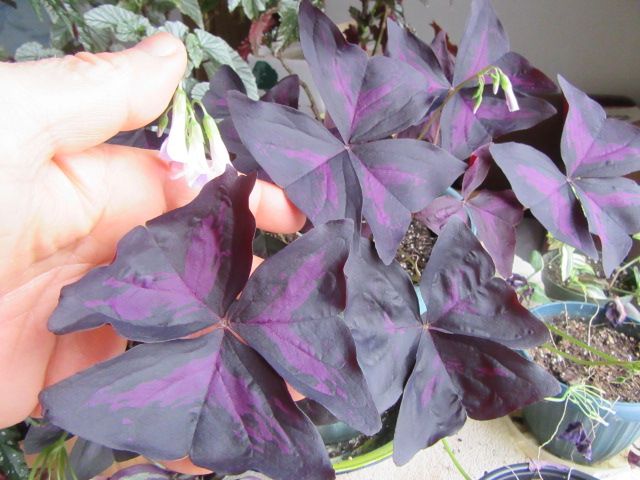 The leaves are as HUGE as always… 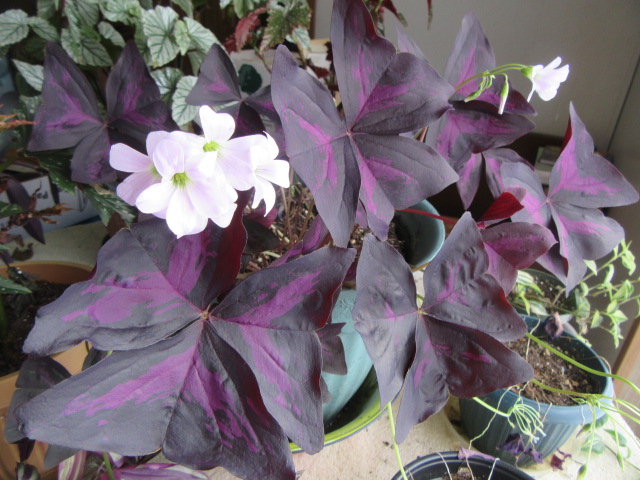 And they continued to flower over the winter.

Spring is right around the corner despite how it feels outside. Soon the plants will be able to return to the front porch.