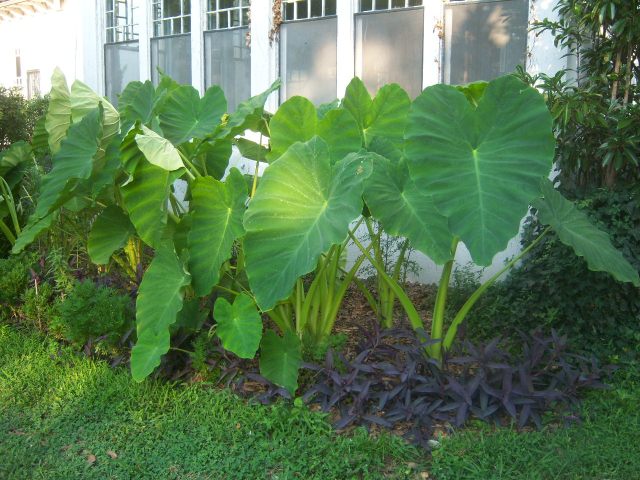 The genus, Colocasia Schott, was named and described as such by Heinrich Wilhelm Schott in Meletemata Botanica in 1832.

As of 11-13-22 when this page was last updated, Plants of the World Online lists 13 species in the Colocasia genus. It is a member of the plant family Araceae with 139 genera. Those numbers could change as updates are made on POWO.

The Leucocasia gigantea ‘Thailand Giant’ rhizome survived most of the winter stored in the basement then it decided to rot. I found a seller on Ebay that was selling “bulbs” which I thought was strange. Pretty much all other sources were selling plants from tissue culture. Out of curiosity, I bought one. It turned out to be a Xanthosoma saggitifolium…

Plant Delights has many cultivars available for a price, but you don’t have to spend that much. Brent and Becky’s, Brian’s Botanicals and even McClure and Zimmerman (just to name a few) have many to choose from that are less expensive. Try Ebay, there are always a lot there and you can find great deals! Just remember you get what you pay for. You can purchase top-sized bulbs for less than large plants in some cases, especially with Colocasia esculenta, and you would be much better off. Rarely will you find bulbs of any Colocasia other than the straight species. Others are available from tissue culture or someone’s offsets. Inexpensive plants usually mean they are starter plants that will be VERY SMALL, but they won’t stay that way. Given the right conditions, some species and cultivars will grow surprisingly fast.

There is a lot of very useful information on the internet about Colocasia and other members of the Araceae Family. You can read all you want and enjoy looking at them growing in yards here and there, but you don’t truly appreciate them until you grow them for yourself.

I am not going into great detail about the Colocasia genus because there is already a lot online about them written by people who know far more than I do. I will tell you that growing Colocasia as big-leaved companions is very addictive. You may be content just growing Colocasia esculenta, but there are many other species, hybrids, and cultivars available. Once you really get into growing Aroids, you will get the fever and the only cure is to grow more.

I don’t claim to be any kind of an expert on Aroids, I just enjoy growing big and unusual plants. The following pages are dedicated to the few Colocasia species and cultivars I have grown since 2009. I hope you enjoy. 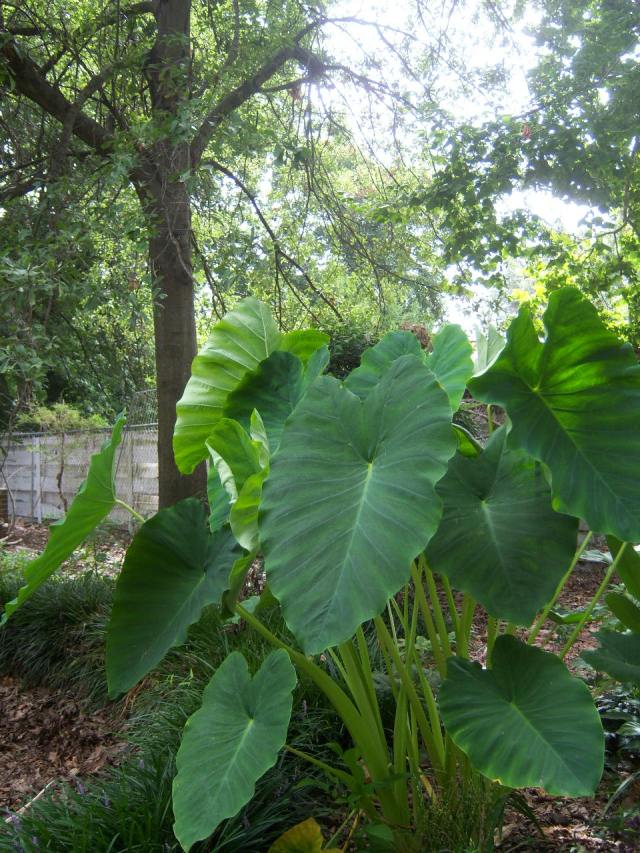 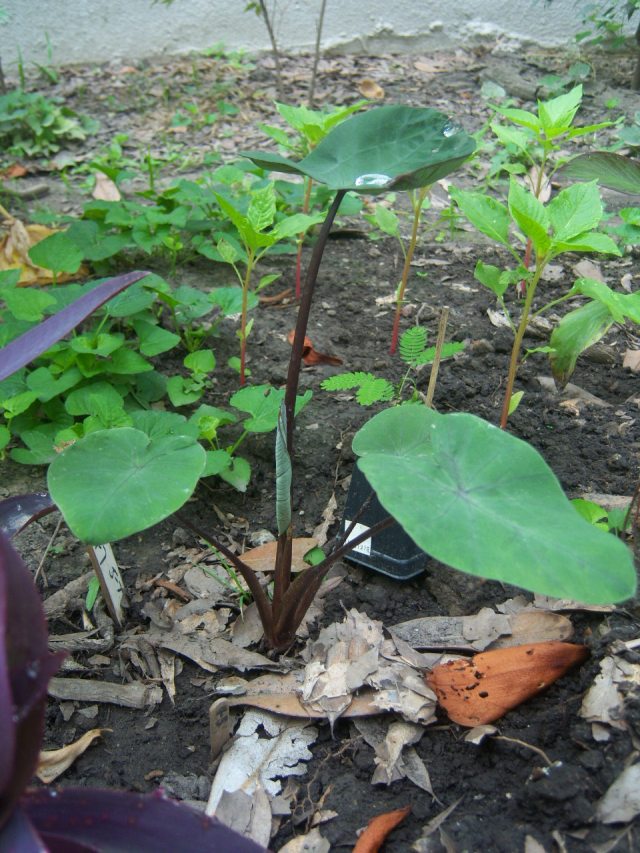 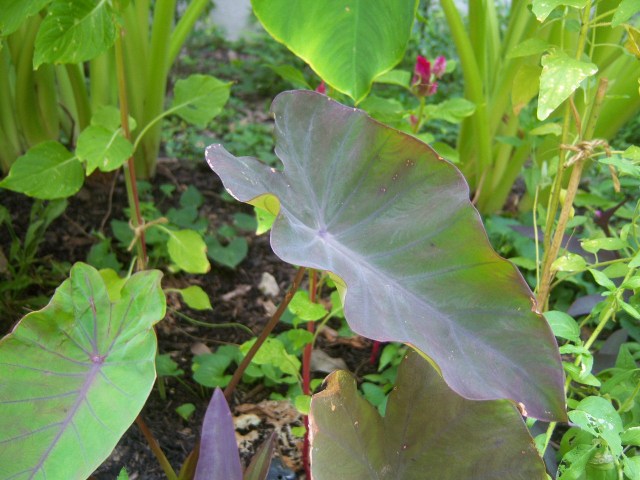 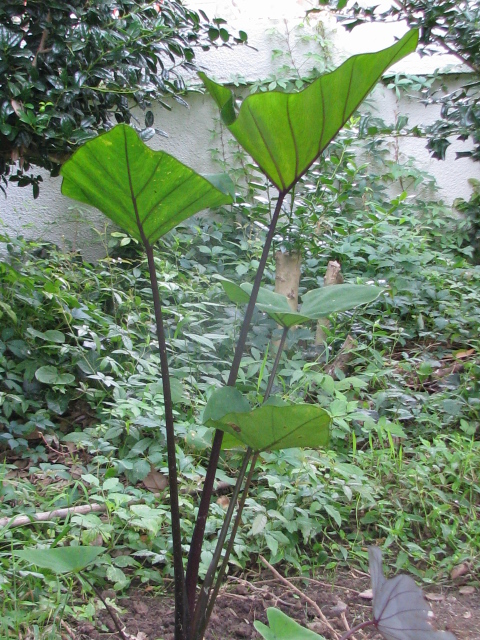 ‘Coffee Cups’ is actually the “official” name and ‘Tea Cups’ is perhaps an industry name. The link above is to the plants I bought while living in Mississippi as Colocasia ‘Tea Cup’.

I brought nice-sized plants home from local greenhouses in 2019 and 2020 and another from Lowe’s in 2021. The labels said Colocasia ‘Coffee Cups’ and they performed much better than the plants did when I lived in Mississippi. 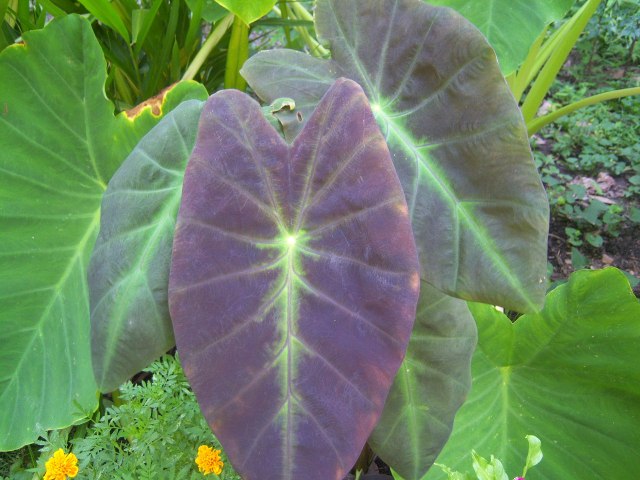 Well, when I bought this plant in 2012, information online said it was Colocasia antiquorum ‘Black Beauty’. That species is now considered a synonym of Colocasia esculenta. My camera was stolen and I had to borrow a friend’s for a while. Most of the photos didn’t come out so well so I don’t have a page for this one… 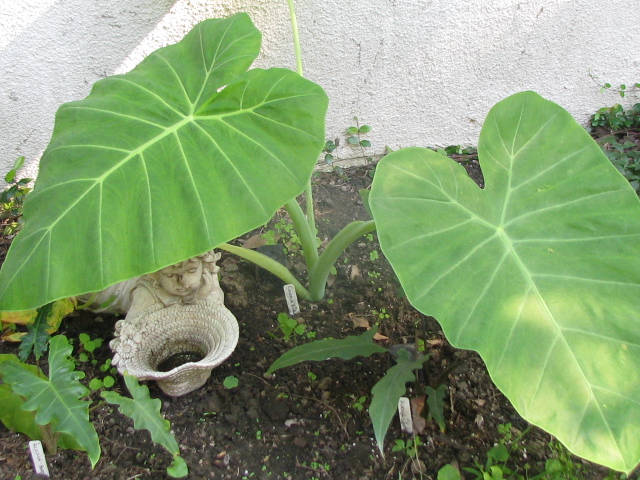 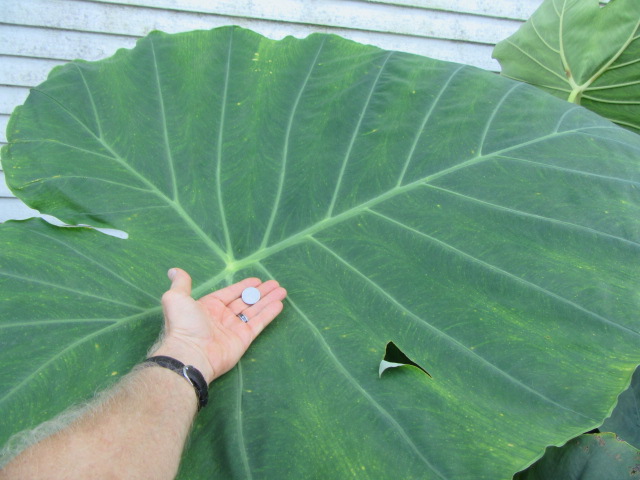 I bought my first ‘Thailand Giant’ from Wellspring Gardens in 2012 as a started plant while living at the mansion in Mississippi. I was surprised when I found one at a local greenhouse in 2017. It turned out to be quite an impressive plant!

Plants Delights has a very good article about growing Colocasia. You can read by clicking HERE.