Cordyline fruticosa on 9-24-12, #119-20. The photo was taken with a friends camera and his brightness settings weren’t set correctly…

Cordyline fruticosa (L.) A.Chev. is the correct and accepted scientific name for this species of Cordyline. It was first documented as such by Auguste Jean Baptiste Chevalier in Catalogue des plantes du Jardin botanique de Saigon in 1919. It was first described as Convallaria fruticosa by Carl von Linnaeus in Herbarium Amboinense in 1754.

Plants of the World Online lists 119 synonyms of Cordyline fruticosa… I would ist them but that would take up to much space. 🙂

The genus, Cordyline Comm. ex R.Br., was described by Robert Brown in Prodromus Florae Novae Hollandiae in 1810. It was previously named and described by Philibert Commerson but Mr. Brown described it later using Mr. Commerson’s description.

Plants of The World Online by Kew still lists 24 accepted species in the Cordyline genus (as of when I am updating this page on 1-18-21). It is a member of the plant family Asparagaceae with 118 genera. Those numbers could change as updates are made. 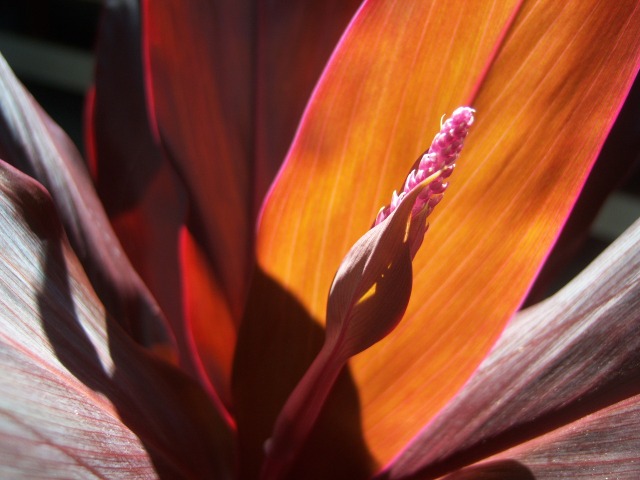 The maroon plant belonged to Tarlei Hitchcock. Tarlei was a florist, a wedding decorator, interior decorator, etc. She also had an amazing backyard. Her husband, Thomas, was like a brother to me. I worked with them for a few years decorating for weddings and in her backyard. They were in Texas decorating houses for Christmas in 2011 and the temperature dropped so I went to their building and brought this plant home with me. I kept it until I moved back to Missouri in February 2013.

The green Ti Plant was given to be by Tarlei because it wasn’t in very good shape. I brought it home and it recovered nicely. Tarlei passed away in 2012 due to a battle with breast cancer but I gave this plant back to Thomas when I moved. Tarlei was loved by so many people and she had an impact on many of our lives.

There are many different cultivars of Cordyline fruticosa with many different leaf colors. They are actually trees and quite often the trunks are cut in pieces of various lengths and are sold as the Ti Plant. Another common name is the Cabbage Palm and can grow to heights of up to 15 feet or more. They are a tropical broadleaf evergreen native to tropical southeastern Asia, Papua New Guinea, Melanesia, northeastern Australia, and parts of Polynesia. Not only are they grown as ornamental plants, they are also used as food.

It is funny how some plants really surprise you with their odd-looking flowers. This was a first for me and I kept waiting for the buds to open up. They still looked like this when I moved back to Missouri.

There is a lot of information online about the Cordyline fruticosa so I didn’t write that much. Just go to the links below. There are more online…

I hope you enjoyed this page and maybe found it useful. If you have any comments, questions, or suggestions, I would like to hear from you. Please click on “like” if you visited this page. It helps us bloggers stay motivated. 🙂 You can check out the links below for further reading. The links take you directly to the genus and species of this plant. If you notice I made an error, please let me know.