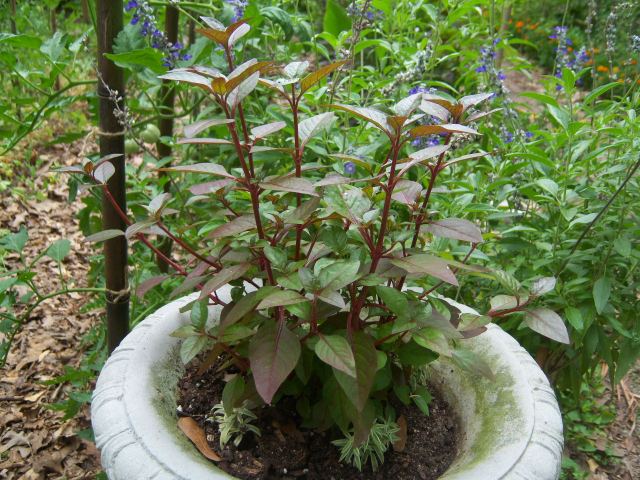 The most commonly used synonym,  Alternanthera dentata (Moench) Scheygrond was named and described by *Arie Scheygrond in Flora of Suriname in 1932. It was earlier described as Alternanthera dentata (Moench) Stuchlík ex R.E.Fr. by Jaroslav Stuchlík then by Klas Robert Elias Fries in Repertorium Specierum Novarum Regni Vegetabilis in 1913 giving credit to Stuchlík’s description. I don’t know why this earlier description was invalid… The basionym was Gomphrena dentata Moench as named and described by Conrad Moench in Supplementum ad Methodum in 1802.

*The link to Arie Scheygrond is in German, so you will need to use Google translator (just type in “translate German to English” and you will find it easily).

As of 11-7-22 when this page was last updated, Plants of the World Online lists 111 species in the Alternanthera genus. It is a member of the plant family Amaranthaceae with 183 genera. Those numbers could change as updates are made on POWO.

I first grew this plant in 2008 while living with my brother in St. Paul, Minnesota. It grew HUGE and I brought it inside for the winter where it continued to grow and even flowered. After seeing the flowers, you would realize why Linnaeus put the species in the genus Gomphrena. The flowers look exactly like the Gomphrena I have grown. Alternanthera brasiliana flowers very late, so unfortunately many people who grow them don’t get to see the flowers. 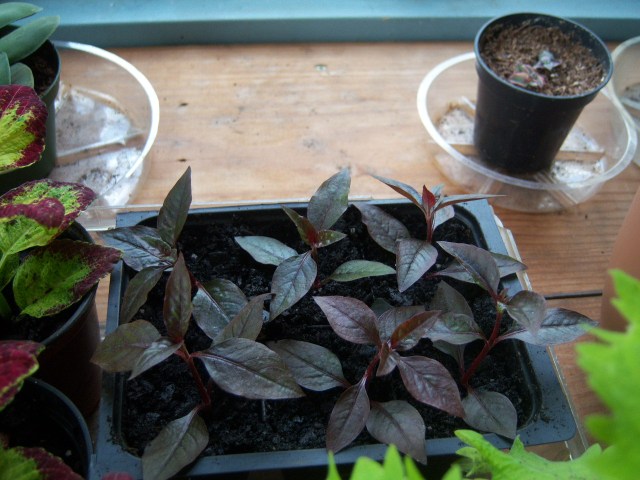 In more light, the leaves are a dark maroon but in more shade, they are greener. These plants also need a little trimming as they will become leggy. Cut them back once in a while and they will keep a nice bushy shape. Cuttings easily take root, too. I had some growing and ready in the sunroom when I had to give them away and move to Missouri in February 2013.

There are several common names for this plant including Ruby Leaf, Parrot Leaf, Calico Plant and Joy Weed but I just called it Alternanthera. ‘Purple Knight’s is the cultivar name for the plants I have grown. Other cultivar names include ‘Red Marble’, Gail’s Choice’, ‘Rubiginosa’, ‘Royal Tapestry’, ‘Little Ruby’, and probably others.

As an herb, this plant was used in Brazilian medicine for inflammation, cough, and diarrhea. Its wound-healing ability has also been studied.

I have not seen any of these plants at any of the local greenhouses or garden centers since I moved back to Missouri. What a shame since this is a very good plant to grow in flower beds and containers. They are available online as plants and seeds.

I hope you enjoyed this page and maybe found it useful. If you have any comments, questions, or suggestions, I would like to hear from you. Please click on “like” if you visited this page. It helps us bloggers stay motivated. 🙂 You can check out the links below for further reading. The links take you directly to the genus and species of this plant. If you see I have made an error, please leave a comment. You can also email me at thebelmontrooster@yahoo.com.