Erigeron canadensis L. is the accepted scientific name for this plant. The genus and species were named and described as such by Carl von Linnaeus in the second volume of the first edition of Species Plantarum in 1753. Many websites are still using the name Conyza canadensis (L.) Cronquist which was named and described as such by Arthur John Cronquist in the Bulletin of the Torrey Club in 1943.

As of 11-26-22 when this page was last updated, Plants of the World Online lists 447 species in the Erigeron genus. It is a member of the plant family Asteraceae with 1,689 genera. Those numbers could change as updates are made on POWO. The number of genera in the family fluctuates quite often.

Distribution map of Erigeron canadensis from Plants of the World Online. Facilitated by the Royal Botanic Gardens, Kew. Published on the Internet; http://www.plantsoftheworldonline.org/. Retrieved February 10, 2020.

As you can see by the map above provided by Plants of the World Online, Erigeron canadensis is a very widespread species. Areas in green are where it is native and purple is where it has been introduced. The map on the USDA Plants Database for North America is about the same but includes another province in Canada.

Hardly anyone in rural areas or even in the city has not come across the Horsetail. They grow just about anywhere, even in cracks in sidewalks, alleys, along backroads, old foundations, fence rows… You get the picture. The species has many common names including Horseweed, Marestail, Horsetail, Canadian Horseweed, Canadian Fleabane, Fleabane, Hogweed, Coltstail, Butterweed, and maybe others.

Erigeron canadensis is an annual weed with a strong ascending growth habit. They generally start branching out toward the upper part of the stem and produce LOADS of flowers and seeds. The long, lance-shaped leaves are arranged in an alternate pattern along the stems. The stems and leaf margins are covered with white hairs. 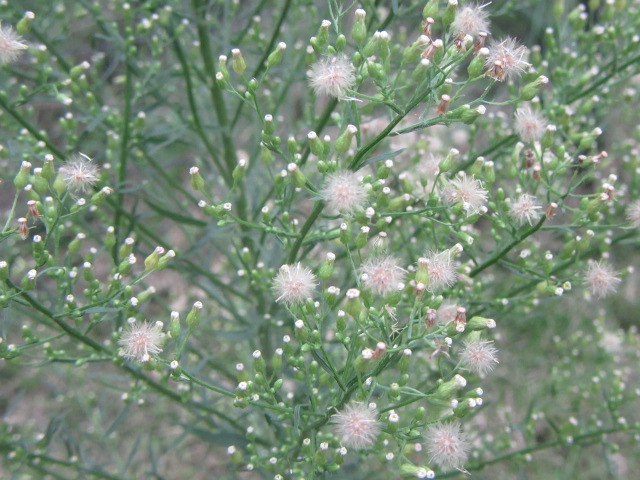 The multitude of flowers produce seeds that are carried through the wind.

I am not going to go into great detail with technical language because this plant is very easy to identify. If you want a complete description you can check some of the links below.

I find it very interesting this plant is edible, so be sure to check out the link below to EDIBLE WILD FOOD.

Remember if you are doing research about this plant it can be listed as either Conyza canadensis OR Erigeron canadensis. Who knows which name will eventually win the prize…

I have enjoyed photographing and learning about the many wildflowers growing on the farm and other areas. I have grown over 500 different plants and identified over 250 species of wildflowers (most have pages listed on the right side of the blog). I am not an expert, botanist, or horticulturalist. I just like growing, photographing, and writing about my experience. I rely on several websites for ID and a horticulturalist I contact if I cannot figure them out. Wildflowers can be somewhat variable from location to location, so sometimes it gets a bit confusing. If you see I have made an error, please let me know so I can correct what I have written.

Note: Some websites are not up-to-date with the scientific name changes and the numbers may not be the same. Plants of the World Online by Kew makes regular updates.