Boehmeria cylindrica (L.) Sw. is the correct and accepted scientific name for this species of Boehmeria. It was named and described as such by Olof Peter Swartz in Nova Genera & Species Plantarum in 1788. It was first named and described as Urtica cylindrica by Carl von Linnaeus in the second edition of Species Plantarum in 1753.

The genus, Boehmeria Jacq., was named and described by Nicolaus Joseph von Jacquin in Enumeratio Systematica Plantarum in 1760. Plants of the World Online by Kew lists 52 accepted species in the Boehmeria genus as of 1-18-20 when I am writing this page). That number could change.

Distribution map of Boehmeria cylindrica from Plants of the World Online. Facilitated by the Royal Botanic Gardens, Kew. Published on the Internet; http://www.plantsoftheworldonline.org/. Retrieved 1-18-20.

The Boehmeria cylindrica is native to much of North and South America. The above map from Plants of the World Online, used by permission, shows where it is native in green and where it was introduced in purple. This species may be found in other areas not included on the map. The USDA map is somewhat different.

There are several good links at the bottom of the page for further reading written by people who know a lot more than I do.

I have encountered the Boehmeria cylindrica throughout my life but really never paid much attention to it. I decided to ID the wildflowers on the farm, and although this species would generally be considered a weed, I suppose it is still a wildflower.

The Boehmeria cylindrica is a nettle without the sting. Its serrated leaves are broad tapering to a point and are covered with very tiny hairs giving them kind of a rough texture. As you can tell in the above photo, there is a prominent central vein and two lateral veins coming from the base of the leaf. Leaves are connected to the plant’s main stem by long petioles. You could say “leaf stems” but you need to learn the correct terminology. 🙂 So, you would say these leaves are broadly ovate, lanceolate, broadly elliptic, petiolate, etc… They taper at the tip and are somewhat angled.

The leaf undersides are a lighter color, kind of chalky looking, because of the fine hair. This is called “glabrous” or “slightly pubescent”. 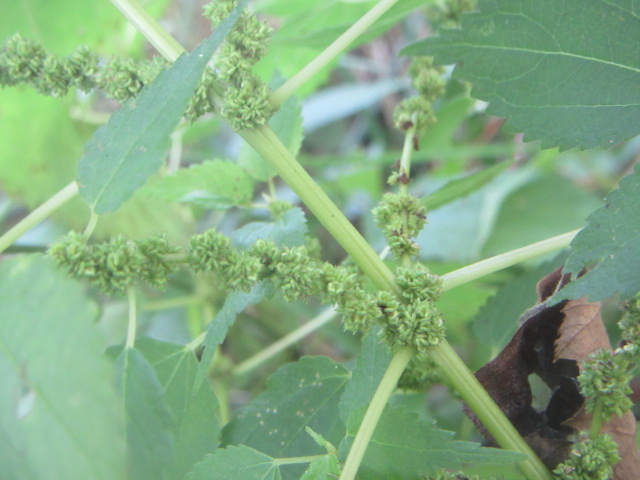 Leaves usually grow in opposite pairs from leaf nodes along the stems. These plant’s stems can be roundish or 4-angled and can be either smooth or kind of fuzzy (glabrous or slightly pubescent). 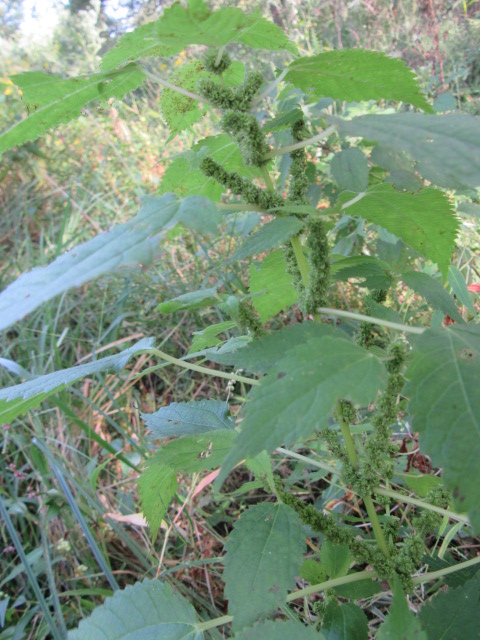 The inflorescence on the Boehmeria cylindrica are weird and easily recognized. I doubt there are any other plants you could mistake this plant for especially when you consider the other features. The inflorescence consists of small, green to greenish-white, dense flower clusters on short or fairly long spikes. Information online says plants can be dioecious or monoecious which means they can have male or female parts in the same flowers or separate flowers. Some websites say they are mainly one or the other depending on the site.

Flowers have no scent to they are pollinated by the wind…

Since this nettle is stingless, they are visited by deer and cattle on occasion. Several caterpillars species feed on Boehmeria cylindrica.

This species prefers growing in a shadier area in moist and fertile soil. Plants growing in more sun will have a yellowish color. The above photos were taken in the back of the farm by the pond where they grow in abundance. They are also growing in several other shady areas.