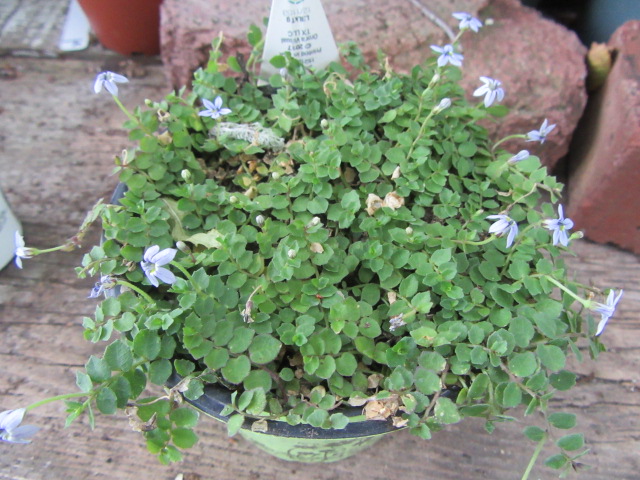 Isotoma fluviatilis (R.Br.) F.Muell. ex Benth. is the correct and accepted scientific name for the Blue Star Creeper. It was described as such by George Bentham in Flora Australiensis in 1868. Mr. Bentham gave Ferdinand Jacob Heinrich von Mueller credit for previously naming the plant and used his description. It was PREVIOUSLY named and described as Lobelia fluviatilis by Robert Brown in Prodromus Florae Novae Hollandiae in 1810.

The genus Isotoma Lindl. was named and described by John Lindley in the Botanical Registry in 1826.

Plants of the World Online lists 10 accepted species of Isotoma (as of 2-1-21 when I last updated this page). It is a member of the plant family Campanulaceae with 89 genera. Those numbers could change as updates are made.

I brought this Blue Star Creeper home from Lowe’s on June 10. I had never heard of this plant before, and it looked pretty neat, so I decided to pick out a pot.

The Blue Star Creeper is a neat plant that provides a dense ground cover. Bluestone Perennials says this plant is perfect between stepping stones and is useful planted over bulbs.

Some websites say if flowers in late spring through early summer and some say it can flower any time of the year… I guess I will find out.

I read on the Gardening Know How website where the Blue Star Creeper is being used and recommended as a low maintenance grass substitute for lawns. Isotoma fluviatilis grows no taller than 3” so it never needs mowing, it tolerates heavy foot traffic just like grass, can be grown in full sun to full shade, even under trees and shrubbery.

It stands up well in extreme weather but not so good during cold winters and hot summers. Well, grass is the same way. Mine turns brown in the winter and dries to a crisp in the summer.

The only drawback is it is non-native to the U.S. and in some situations spreads very quickly and can become invasive. But, on the brighter side, they are easily pulled up.

The Blue Star Creeper is very drought tolerant but appreciates extra water when grown in full sun especially in hot, dry summers. To much water and fertilizer will make it spread faster.

THEN, I read on Gardenerdy this statement: “A word of caution about this plant, wear gloves while handling it, as it may cause skin irritation or an allergic reaction, due to it being poisonous. Being a non-fussy plant, it definitely deserves a place in every garden.” Hmmm… Are you sure you want to grow it as a lawn substitute if it is poisonous or a skin irritant?

I didn’t exactly put this plant in an ideal spot and was eventually covered up by the other plants. I kept checking to see if it was still alive and probably should have moved it. It continued to live so maybe it will survive the winter and come up in the spring of 2019. We shall see.