Salvia coccinea Buc’hoz ex Etl. is the correct and accepted scientific name for this species of Salvia. It was described as such by Andreas Ernst Etlinger in Commentatio Botanico-Medica de Salvia in 1777. Mr. Etlinger gives credit to Pierre Joseph Buc’hoz for first naming and describing the species in Histoire Universelle du Règne Végetal but I don’t know the date.

The genus, Salvia L., was named and described as such by Carl von Linnaeus in the first volume of the first edition of Species Plantarum in 1753.

As of 12-1-21 when this page was last updated, Plants of the World Online by Kew lists 1,010 species in the Salvia genus. It is a member of the plant family Lamiaceae with 233 genera. Those numbers could change as updates are made on POWO.

Salvia coccinea is native to several southern states in the US and parts of Mexico, Central America, and down into South America. It is the only Sage native to the U.S. with red flowers. The exact origin is unclear, but some information suggests possibly Mexico and or Brazil.

I bought my first Salvia coccinea from an Ebay seller in 2012 while living at the mansion in Mississippi. In 2014 I purchased three plants from Harrison’s Greenhouse labeled “Salvia Mixed” that turned out to be Salvia coccinea. I planted them in the beds on the north and south side of the house where they have continued to self-sow and come up ever since. They weren’t flowering when I bought them so I didn’t know one was going to be a pink bi-color.

The one I planted in the north bed is bright red. The North bed gets a little morning sun and then again in the late afternoon/early evening. I must say, these red flowers really brighten this area up. You can see them from across the yard. 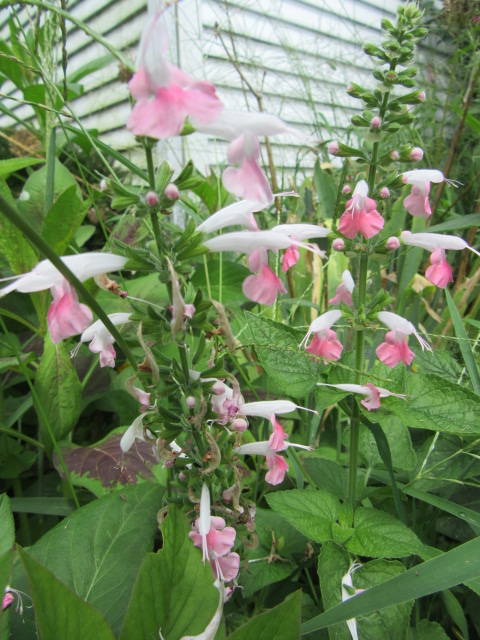 I planted two of the plants from Harrison’s Greenhouse in the bed on the south side of the house in the west corner. One turned out to be red and the other a bi-color pink. I must admit, even though they are pink, they are pretty neat looking. Taking good close-up photos of these flowers is difficult. Most of them are too blurry so I have to take several to end up with a few good ones.

They are certainly not the earliest seeds to come up in the spring but eventually, they do emerge. Once they get started, they grow very fast. Next thing you know, they have branched out are loaded with flowers.

Salvia coccinea is considered an herbaceous perennial in USDA zones 9 and 10, reseeds in 6 to 8, and grown as an annual in cooler zones.

The Scarlet Sage is a fast-growing, multi-branched plant that can grow 2 to 4 feet tall x 2 1/2 feet wide. 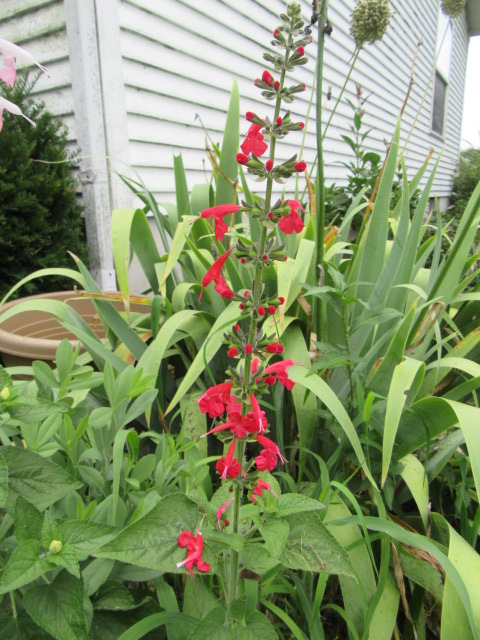 Although the best known common name is Scarlet Sage, red is not the only flower color. They also come in pink, salmon, orange, and bi-colors. Unfortunately, mine are only red and pink and white bicolor. Some websites say Salvia coccinea doesn’t produce white flowers, but there is a photo of white-flowered plants on Floridata (see link below). 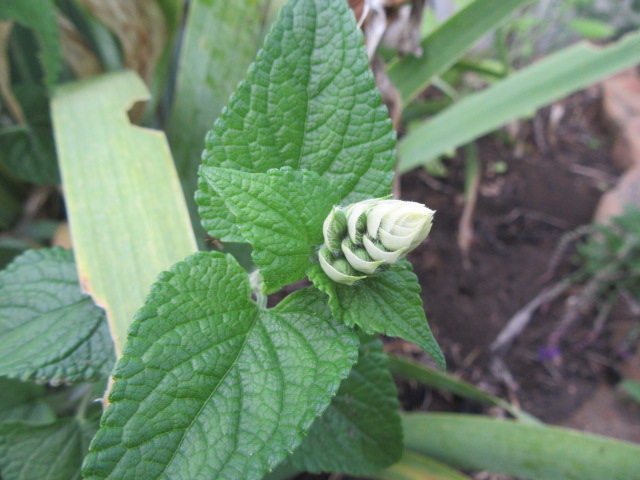 The flowers attract hummingbirds, bees, and butterflies. The Museum of Science and Industry in Florida named the Salvia coccinea as their number one nectar plant. 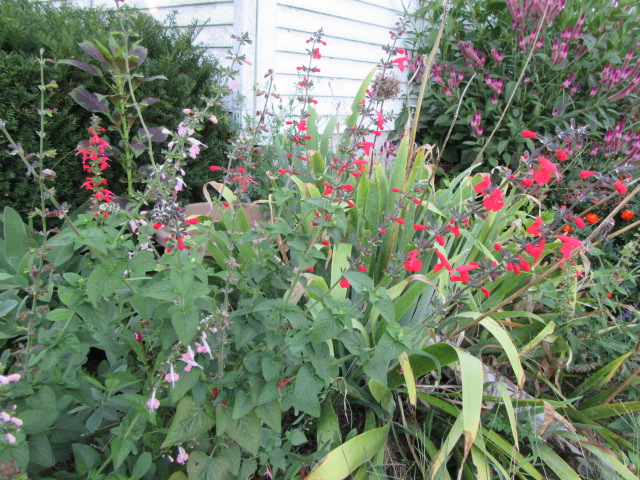 The Salvia coccinea is drought tolerant but appreciates a little extra water during the summer. They will grow in full sun to part shade where their bright flowers will light up the area. 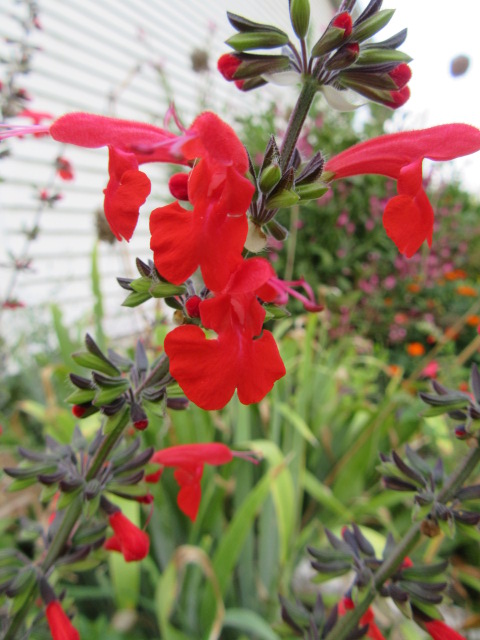 Although they produce an abundance of flowers and seeds, they have not gotten out of hand. Personally, a few more coming up would allow me to move them to other parts of the yard. 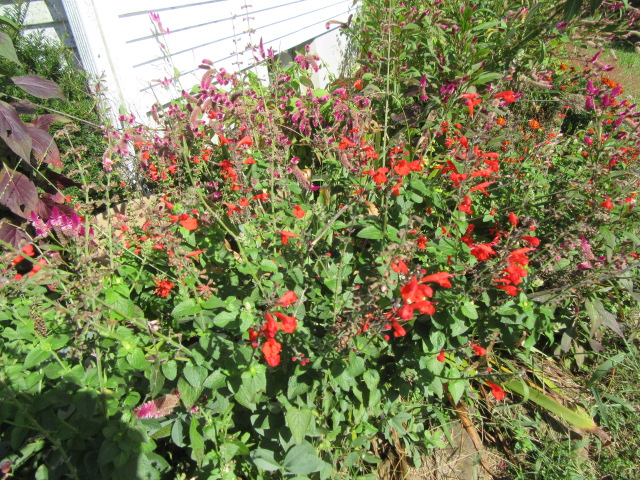 Even when temps start getting cooler the Salvia coccinea continues to flower right up until a bad zap. The “F” word… 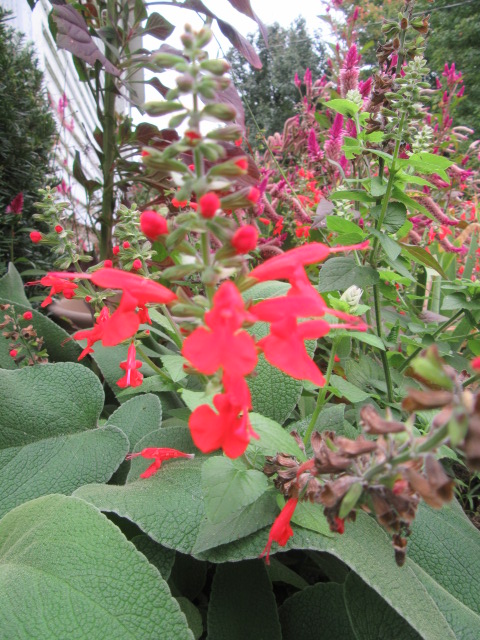 Then I run out of words…

Even the buds are neat.