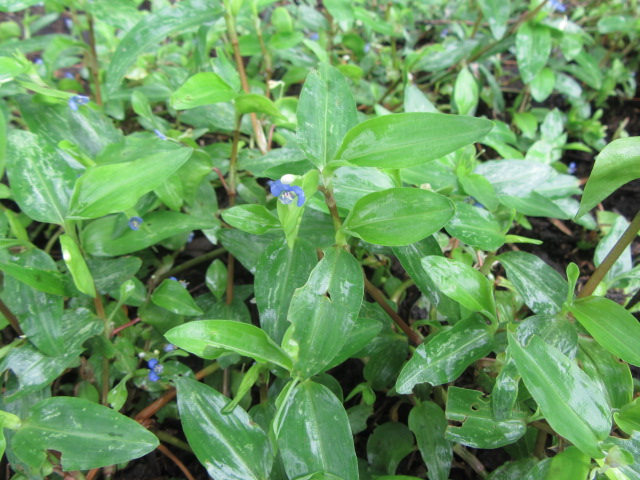 Commelina diffusa Burm.f. is the correct and accepted scientific name for this species of Dayflower. It was named and described as such by Nicolaas Laurens Burman in Flora Indica in 1768.

The genus, Commelina Plum. ex L., was described by Carl von Linnaeus in the first edition of Species Plantarum in 1753. Mr. Linnaeus gives credit to Charles Plumier for naming the genus.

Plants of the World Online list 199 species in the Commelina genus (as of when I last updated this page on 3-4-21). It is a member of the plant family Commelinaceae with 39 genera. Those numbers could change as updates are made (and likely will).

Distribution map of Commelina diffusa from Plants of the World Online. Facilitated by the Royal Botanic Gardens, Kew. Published on the Internet; http://www.plantsoftheworldonline.org/. Retrieved January 27, 2020.

The above photo shows the distribution map of Commelina diffusa from Plants of the World Online. Areas where it is native are in green and purple is where the species has been introduced. The map on the USDA Plants Database for North America is similar. The species may have a wider range than what the maps show.

Steyermark’s Flora of Missouri indicates the geographic origin of C. diffusa is poorly understood and many botanists question whether or not it is a native of North America. Although the above map shows it is an introduced species from the United States down into South America, it could very well be a native species in some areas. Steyermark’s further says the species has many characteristics of introduced weeds, but it has been recognized in Missouri since the early 1800’s suggesting it is a “disturbance-adapted” native. There are MANY species of plants that are considered native to most of the world making one wonder where they actually began.

THERE ARE SEVERAL LINKS AT THE BOTTOM OF THE PAGE FOR FURTHER READING AND TO HELP WITH BETTER POSITIVE ID. 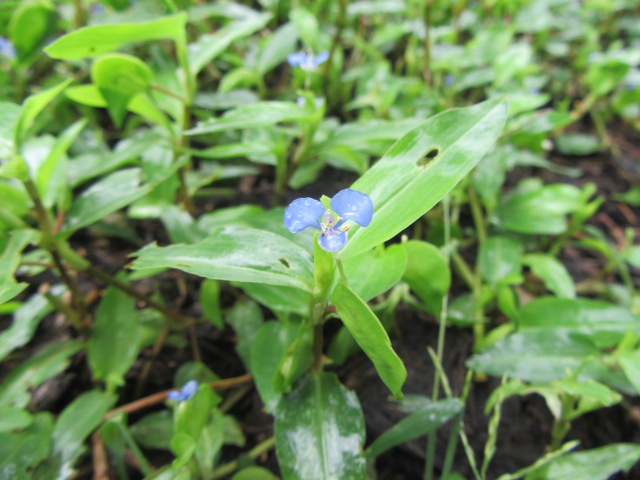 I remember as a kid seeing a blue-flowered weed growing along the house in the flower bed in town. Many years went by and I moved back to the family farm in 2013. I started the new blog and photographing and writing about plants I had and am growing as well as a few wildflowers. There are several species of Smartweeds growing on the farm and I wondered if that weed with the blue flowers from my childhood was a Smartweed of some sort. There were cows grazing in the pastures and it wasn’t until 2018 that I first spotted a wildflower in an area below the pond in the front pasture with blue flowers. I had barely scratched the surface identifying the wildflowers on the farm, but upon research, I found this plant was likely Commelina diffusa, commonly known as the Spreading or Climbing Dayflower.

I set out to identify more wildflowers on the farm in 2019 and spotted two other species of Dayflowers, Commelina communis and Commelina erecta. I didn’t have cows in the pasture in 2019 so it could be used for hay and the grass grew quite tall. It wasn’t until after the hay was cut that I found a very small patch of Commelina diffusa below the pond in an area that slopes toward the ditch where the pond and pastures drain. 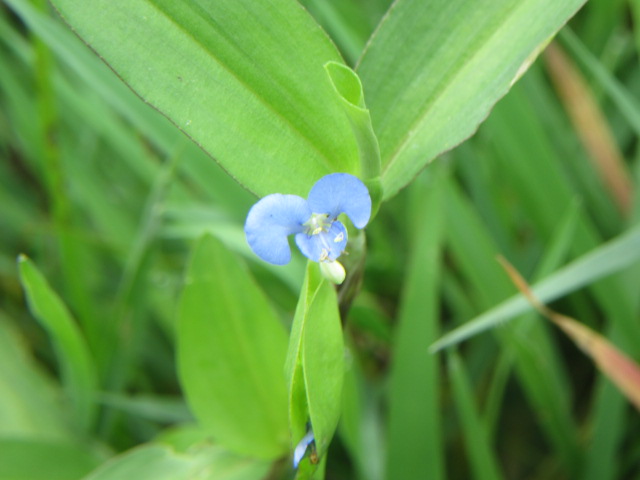 During the summer I take a lot of photos and identify wildflowers the best I can but I write most of the pages during the winter months. It often isn’t until then that I read more thoroughly so I can write descriptions in more understandable language for most people. The problem is during the winter I cannot go back to where the plants are growing to check characteristics that may distinguish them from similar species. So, while I believe this plant in question is Commelina diffusa it could possibly be Commelina virginica.

Flowers emerge from what is called a “spathelike” bract. These bracts are folded, so the lower edge is actually the midrib. If you unfold it, it would be sort of heart-shaped. Anyway, the upper margin for Comellina diffusa is supposed to “free to the base” while the lower third of the margin is supposed to be fused with C. virginica. As you can tell with the above photo, the bract appears to be fused in the center. Two to three flowers emerge from the same bract, the first one from the front and the others from rear. So, isn’t it possible the other two open the margin? Hmmm…

Many close-up photos I took in 2019 were burry so I couldn’t use them. Also, there weren’t that many flowers to photograph by the time I found them that weren’t almost already spent.

The leaves grow in an alternate pattern on the stem which sprawl out on the ground as the stems get longer and may root at the nodes. Commelina diffusa grows as an annual here but is perennial in the south. 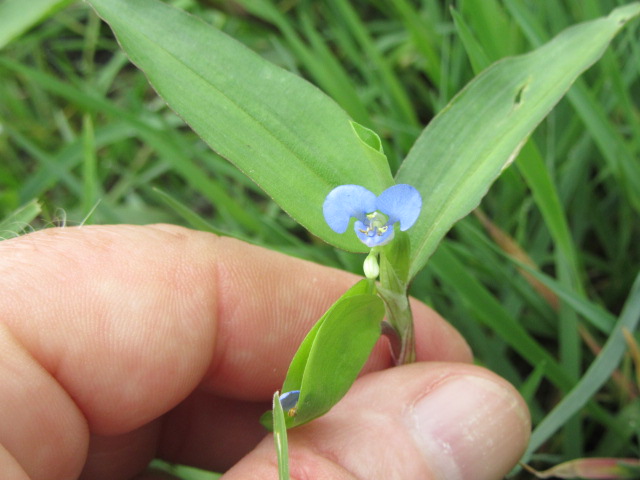 Flowers emerge from the spathelike bract at the top of the stem. I was wondering what the white thing was under the lower petal. Sometimes you take photos and don’t realize what you are shooting until later. 🙂 You can see spathelike bract appears to be fused

The other distinguishing features between C. diffusa and C. virginica are the leaf sheaths on the stems. The base of the leaves has a sheath that grows around the stems at the nodes. With Commelina diffusa, these sheaths are normally up to 1 cm long and have white hairs. The leaf sheaths of C. virginica have reddish-brown hairs and are usually longer at 1-3 cm. Based on that, I don’t see any reddish-brown hairs but the upper portion of the sheath and the margin looks like there is white fuzz… I will look more closely in 2020 and take better close-up photographs.

I find this photo somewhat odd… As far as the white thing I mentioned in a previous photo, here you can see what it is. But, what is it really? There are two and they appear to be buds but that would be weird… The “stem” the flower grows from is called a peduncle and normally, with Commelina species, each peduncle has a single bract. Sometimes 2-3 flowers grow from the same bract but the flowers are growing much different with this species…

Steyermark’s Flora of Missouri says the inflorescences of Commelina virginica are “mostly clustered” near the tips of the stems. 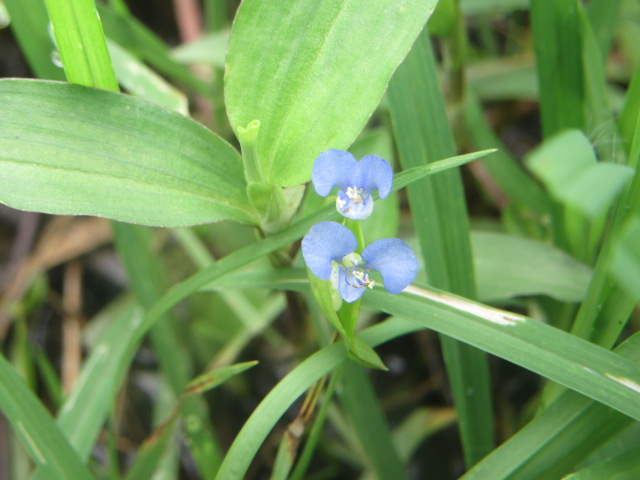 I am finished with this post for now. I will take more photos in 2020 if I can find this species again. Like I mentioned, it is only growing in one tiny area, about 2′ square. You just never know…

I also have pages for Commelina communis (Asiatic Dayflower) and Commelina erecta (Whitemouth Dayflower) if you are interested.