*I didn’t update this list of synonyms on 11-18-21 when this page was last updated. POWO is working on the synonyms for some species and their page for this species wasn’t ready yet.

Crassula perforata Thunb. is the correct and accepted scientific name for this species of Crassula. It was first documented by Carl Peter Thunberg in Nova Acta Physico (the short version of a long title) in 1778.

As of 11-18-21 when this page was last updated, Plants of the World Online by Kew lists 205 species in the Crassula genus. It is a member of the plant family Crassulaceae with 36 genera. Those numbers could change as updates are made on POWO.

I brought my Crassula perforata home from Lowe’s or Wal-Mart in Greenville, Mississippi on August 25, 2012. It has got to be the stiffest plant I have grown, almost like it’s artificial. It also grows very fast compared to some other succulents. It is called Necklace Vine because the leaves can be rotated around on the stem-like beads on a string, which of course can break at the petiole. In my experience, as the plant grows, the stems grow straight up then, with the weight, start leaning over and can break.

This species of Crassula is native to the south and eastern Cape Province in South Africa north to Natal. This interesting form has reddish margins around the leaf. It produces inconspicuous pale yellow flowers in the spring. It is kind of a shrubby plant that grows to around 18-24″ tall. They like full sun to light shade but needs protection from the sun in hotter locations. The brighter light brings out the red tones in the leaves and it will flower more. They can tolerate temps as low as 20-25° F, but should be protected from frost. It needs fast-draining soil and should be only watered regularly during the growing period. Water very sparingly through the winter.

I brought my Crassula perforate with me when I moved back to the family farm in mid-Missouri in February 2013. I put it on the windowsill in the kitchen…

I really liked this plant but there were some issues…

By this time, only two of the original stems were unbroken. At least the other two started branching out. I attempted to get the leaves of the other two stems that broke to root but they would not.

As you can see in the above photo, the longer stems were starting to break. Luckily they stayed on…

Unfortunately, I had to give up this plant in the late summer of 2014 as with most of my plants. 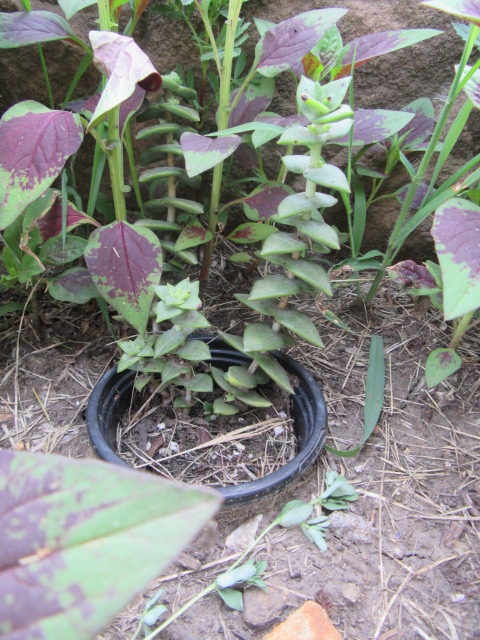 I was able to find another fairly nice Crassula perforata in the spring of 2016… BUT, I had this idea that I was going to try and put some of my succulents in the flower bed behind the old foundation… Where they could get full sun. I didn’t want to put them in the dirt, so I just stuck the whole pot in the ground. The Marigolds and Celosia spicata ‘Cramer’s Amazon’ soon overtook the succulents I put there. I got busy and they got neglected… It was much easier not to forget about them when they were in pots and on the table with the other succulents. The next thing I knew, my Crassula perforata had almost been completely eaten up by bugs… SO, I moved it with the other succulents but it soon passed on. I will not do that again.

Hopefully someday soon I will find another one. I WILL figure out how to successfully grow this species!