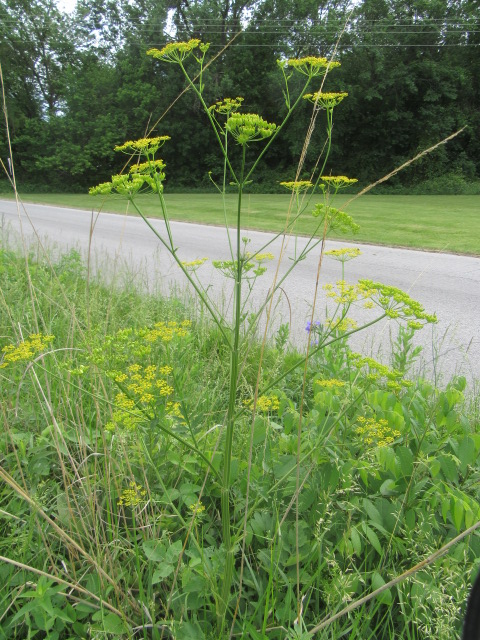 Pastinaca sativa L. is the correct and accepted scientific name for the Wild Parsnip. Both the genus and species were named and described as such by Carl von Linnaeus in the first volume of the first edition of Species Plantarum in 1753.

Plants of the World Online by Kew lists 15 species in the Pastinaca genus (as of 5-19-21 when I last updated this page). It is a member of the plant family Apiaceae with 440 genera. Those numbers could change as updates are made.

Distribution map of Pastinaca sativa from Plants of the World Online. Facilitated by the Royal Botanic Gardens, Kew. Published on the Internet; http://www.plantsoftheworldonline.org/. Retrieved on April 20, 2021.

The above distribution map for Pastinaca sativa is from Plants of the World Online. Areas in green are where the species is native and purple where it has been introduced. While the map on the USDA Plants Database (below) shows a much broader range for the U.S. and Canada, the map on POWO shows where the species is native and where it has been introduced in other parts of the world.

POWO gets some of their maps for the United States and Canada from Flora of North America for families recognized on that site. When I wrote and updated this page FNA had not yet included genera from the plant family Apiaceae. The editor of POWO said they would start using maps from the USDA Plants Database for families not included on FNA later in 2021.

Distribution map for Pastinaca sativa from the USDA Plants Database. Published on the internet at https://plants.sc.egov.usda.gov/home. Retrieved on May 19, 2021.

The distribution map above for Pastinaca sativa is from the USDA Plants Database. All areas in blue show where the species has been introduced. This species is not native to the U.S. and Canada…

The map on iNaturalist shows where members have made observations. Anyone can join and it is a great website to confirm and share your observations. 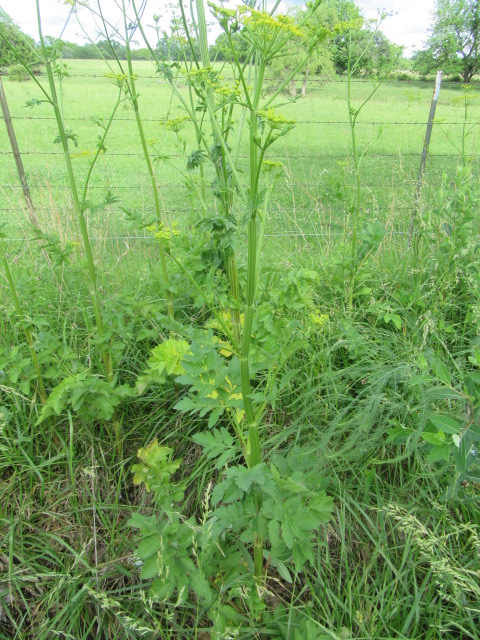 I took the photos of the Pastinaca sativa (Wild Parsnip) along the road in front of the pasture on my farm on May 20 in 2017. There are always several of these plants so I really need to take more photos. Wild Parsnips are a common sight along highways, back roads, and pastures throughout Missouri and the rest of the country for that matter.

It is quite odd to me how the edible culinary parsnip is the same species as the Wild Parsnip. Both the culinary form and the Wild Parsnip have sap that contains furanocoumarins which cause photodermatitis in sensitive individuals. This can also affect poultry and livestock…

I apologize for not writing descriptions at the moment, but I have A LOT of wildflower pages to make and publish before I start getting too busy. I update this site and add new pages over the winter but I didn’t get finished. SO, I decided to just make the page with photos and links to other sites for better plant ID. I will be taking more photos over the summer and posting but I will also be working on these pages as I have time.

I have enjoyed photographing and learning about the many wildflowers growing on the farm and other areas. My farm is in Windsor, Missouri in Pettis County (Henry County is across the street, and Benton and Johnson aren’t far away). I have grown over 500 different plants and identified over 100 species of wildflowers (most have pages listed on the right side of the page). I am not an expert, botanist, or horticulturalist. I just like growing, photographing, and writing about my experience. I rely on several websites for ID and a few horticulturalists I contact if I cannot figure them out. Wildflowers can be somewhat variable from location to location, so sometimes it gets a bit confusing. If you see I have made an error, please let me know so I can correct what I have written.

NOTE: The data (figures, maps, accepted names, etc.) may not match on these websites. It depends on when and how they make updates and when their sources make updates (and if they update their sources or even read what they say). Some websites have hundreds and even many thousands of species to keep up with. Accepted scientific names change periodically and it can be hard to keep with as well. Some of the links may use a name that is a synonym on other sites. In my opinion, Plants of the World Online by Kew is the most reliable and up-to-date plant database and they make updates on a regular basis. I make updates “at least” once a year and when I write new pages or add new photos but I do get behind. We are all a work in progress. 🙂