Phedimus spurius (M.Bieb.) ‘t Hart is the correct and accepted scientific name for this species of Phedimus. It was named and described as such by Henk ’t Hart in Evolution and Systematics of the Crassulaceae in 1995. It was first named and described as Sedum spurium M.Bieb. by Friedrich August Marschall von Bieberstein in Flora Taurico-Caucasica in 1808.

Phedimus spurius/Sedum spurium ‘John Creech’ was named after Dr. Jon Creech, former director of the U.S. National Arboretum. Dr. Creech discovered this plant in the Siberian Academ Gorodok Gardens in 1971. The plant was identified by Ray Stephenson in 1971 as a rare, small-leaved, pink-flowered form of Sedum spurium.

The genus, Phedimus Raf., was named and described by Constantine Samuel Rafinesque in the American Monthly Magazine and Critical Review in 1817.

The genus, Sedum L., was named and described as such by Carl von Linnaeus in the first volume of the first edition of Species Plantarum in 1753.

As of 11-19-21 when this page was last updated, Plants of the World Online by Kew lists 16 species in the Phedimus genus. It is a member of the plant family Crassulaceae with 36 genera. POWO lists 462 species in the Sedum genus… Those numbers could change as updates are made on POWO.

I had been in correspondence with one of the foremost Crassulaceae experts, Margrit Bischofberger of the International Crassulaceae Network, and she had this to say in an email in 2013…

“The genus Sedum in a wide sense has been used to accommodate a great number of sometimes fairly diverse plants. At the end of the last century botanists have begun to separate certain groups with distinctive features and give them new names, > Phedimus, > Hylotelephium, < Rhodiola, > Orostachys etc.” 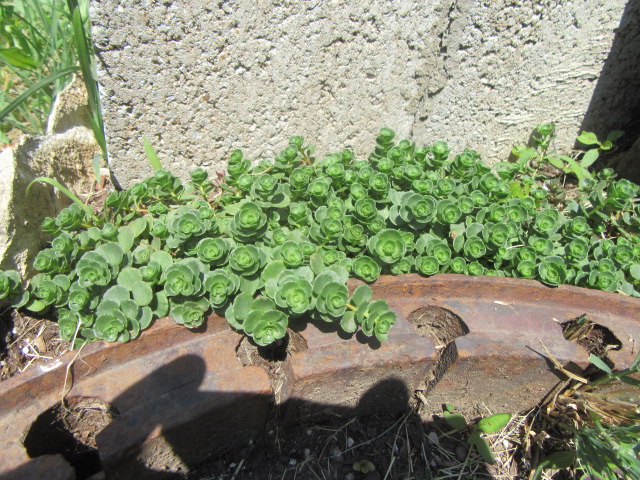 I bought this nice Phedimus spurius ‘John Creech’ from Green Streets Market in 2017. This garden center always has a very nice selection of plants to choose from. This is where I also buy most of the seeds for the garden and where my dad did for many years before.

I planted it behind the old cast iron planter in the bed behind next to the foundation of my grandparent’s old home. The cast iron planter used to be a firebox in an old coal-fired furnace. A good friend of mine and I removed the furnace from a home in the early 1980’s and it has been in this spot ever since.

In my experience, Phedimus and Sedum do well in a slightly elevated bed or in pots where their soil can drain well. They do NOT like wet feet, especially during the winter months.

As with most “groundcover-type” Phedimus and Sedum, they prefer well-drained soil in full sun to light shade. In areas with very hot summers, it is best to grow them where they have some shade during the heat of the day. In this location, the Phedimus spurius ‘John Creech’ receives a good amount of sun all day until late afternoon as the sun passes over the foundation.

During the winter the leaves turn a nice burgundy color. January 2018 was very cold, even down to -10° F twice the first week. The Phedimus spurius ‘John Creech’ survived with flying colors… 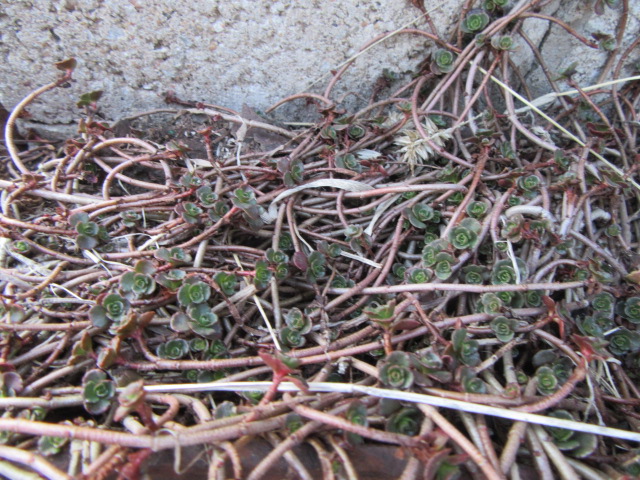 As the temperatures started warming up and the day-length increased, its leaves started turning green once again.

After another month, it was looking very good!

Leaves along the stems are arranged in two rows, giving this plant one of its common names, Two-Row Stonecrop.

If allowed, it is no doubt Phedimus spurius ‘John Creech’ would spread quite well…

I guess I need to put a few pieces in other areas, huh… 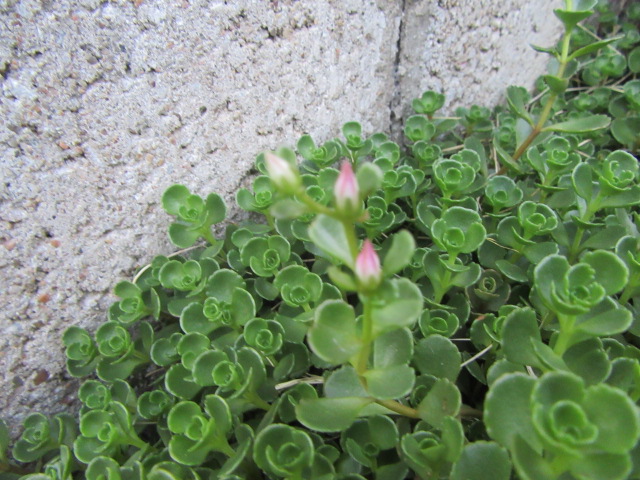 I was happy to see it had one stem with flowers but maybe it will have more in 2019. I tried several times to get better photos, but they were all blurry. I guess it is camera shy… 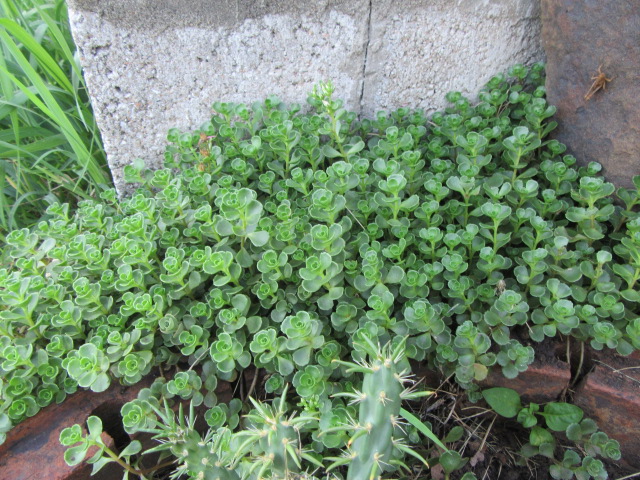 Even though we have had a very hot and dry summer, the Phedimus spurius ‘John Creech’ has been a great performer. They like supplemental water during the hotter months, but sometimes I am busy or I have to water the plants whose life depends on it. Even though it has been sometimes over a week between waterings, all the Sedum in the bed behind the old foundation always does great.

The Phedimus spurius ‘John Creech’ is a pretty good spreader and has been sneaking into the planter. 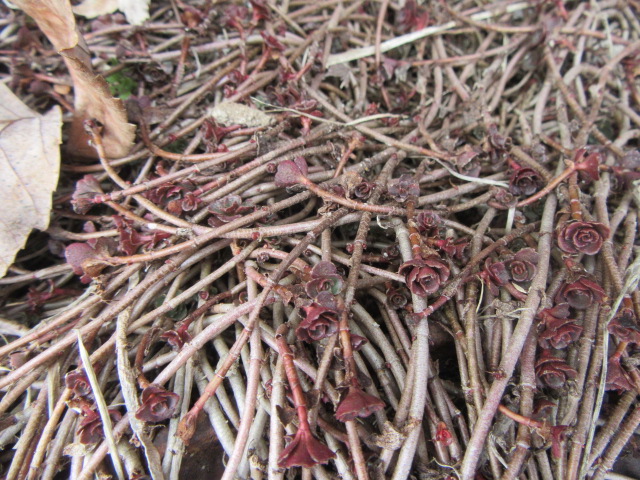 We have made it through the winter once again. It wasn’t near as cold as last winter and we had periods of nice days followed by several snows. As always, Phedimus spurius loses its lower leaves and retains the top leaves. Soon warmer temps will stay around and this clump will start growing once again.

By April 7 the Phedimus spurius ‘John Ceech’ was greening up nicely and growing new leaves.

Trying to take over new territory in the cast iron planter…

What else can I say? 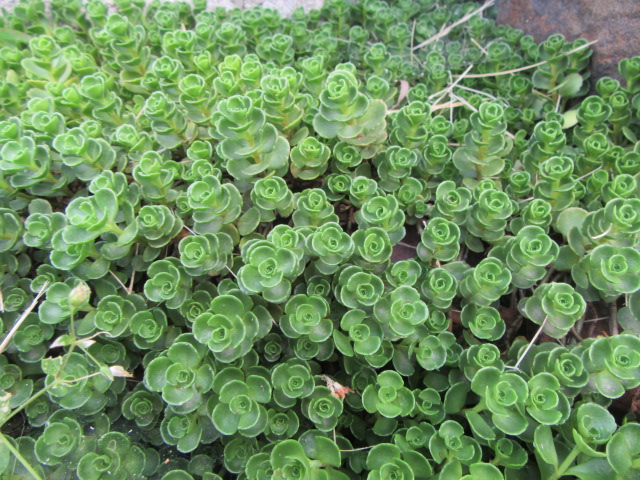 As usual, the Phedimus spurius ‘John Creeck’ went through the winter with flying colors. On March 30, 2020, it was greening up nicely ready to take over the cast iron planter again.

It continued to thrive over the summer of 2020 but I was fairly busy and didn’t get many plant photos taken. Hopefully, I will do better in 2021.

It is always good to have plants that thrive in adverse conditions as well as when conditions are just right. This Pededimus spurius ‘John Creech’ performs well all summer long and has proved to be reliably cold hardy. I highly recommend this cultivar!

I hope you enjoyed this page and maybe found it useful. If you have any comments, questions or suggestions, I would like to hear from you. Please click on “like” if you visited this page. It helps us bloggers stay motivated. 🙂 You can check out the links below for further reading. The links take you directly to the genus and species of this plant. Some websites say Phedimus spurius and some say Sedum spurium…