The genus, Persicaria (L.) Mill., was named and described as such by Philip Miller in the fourth edition of Gardener’s Dictionary in 1754.

As of 12-11-21 when this page was last updated, Plants of the World Online by Kew lists 129 species in the Persicaria genus. It is a member of the plant family Polygonaceae with 56 genera. Those numbers could change as updates are made by POWO.

Distribution map of Persicaria pensylvanica from Plants of the World Online. Facilitated by the Royal Botanic Gardens, Kew. Published on the internet at http://www.plantsoftheworldonline.org/. Retrieved on October 2, 2019.

The distribution map above for Persicaria pensylvanica is from Plants of the World Online. Areas in green are where the species is native and purple where it has been introduced. The USDA Plants Database for the United States ans Canada is a little different. The USDA still lists the species as Polygonum pensylvanicum…

The first photo was taken of a colony of Persicaria pensylvanica growing in a brush pile in an area behind the barn. There are only a few small colonies of this species but they have also intermingled with other species in a few other areas.

Persicaria pensylvanica is a fairly easy species to identify. They have larger flowers on larger racemes, around 2 1/2″ long. Most stems terminate with several racemes from the upper nodes of the plants. 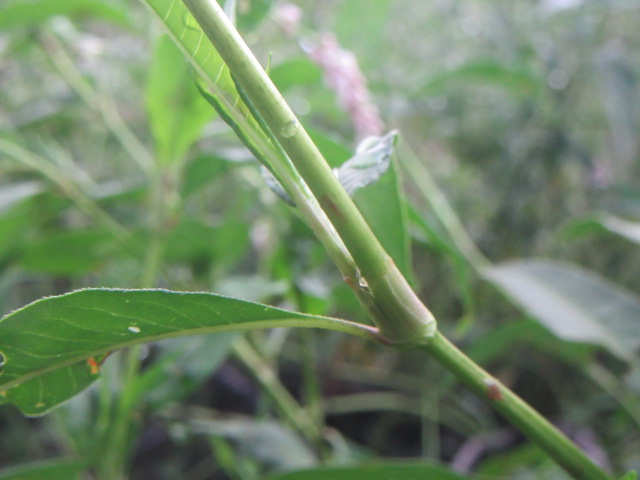 Stems are glabrous and decumbent, which means they sprawl on the ground and stand up at the end. The plants in the colony growing in the brush pile appeared taller because they were growing in the brush. Information online says they grow from 1-4′ tall, but I guess that depends on how you look at it.

Translucent ocrea (sheath) develops at the base of the petioles and surrounds the node (joint). The ocrea is formed by the fusion of two stipules. Cilia (bristles) form but fall off at the top of the ocrea soon so they are not an ID issue. ID information online normally say they have no cilia above the ocrea, but on occasion, I have seen a few. The nodes are light green to brownish, depending on age. 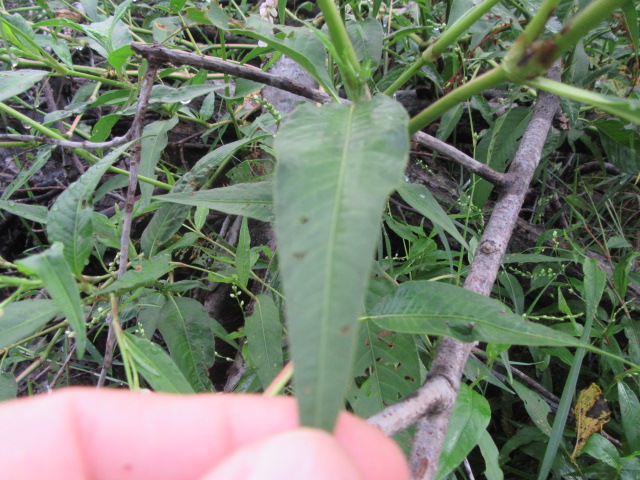 The medium to dark green leaves can grow up to 7″ long x 2 1/2″ across. Some leaves have a dark V-shaped spot on the upper portion of the leaf which is one identifying characteristic of this species.

As with some other Persicaria species, P. pensylvanica stems may grow in a “zig-zag” pattern. Stems can be light green to red. 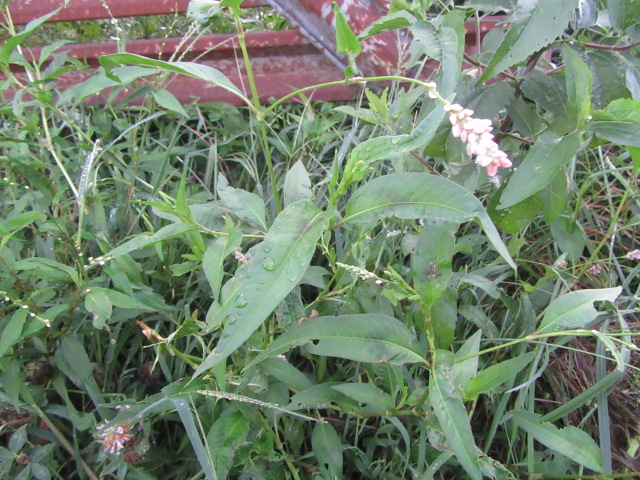 This nice small colony of Persicaria pensylvanica is growing next to the gate in front of the barn.

I like explaining the characteristics of plants and flowers in an easy-to-understand language or explain the technical terms. The flowers of Persicaria pensylvanica are densely packed on a 1 1/2″ (usually) raceme. Without getting too technical, each flower is approximately 1/8″ long (or longer) and consists of 5 tepals which join together at the lower half of their length. The tips are ovate and erect. If you want more technical information, read the descriptions given by Missouri Plants, Illinois Wildflowers, etc. from the links at the bottom of the page. They are the experts…

The above photo shows the characteristic dark V-shaped blotch of Persicaria pensylvanica. As I mentioned, not all leaves, or even all colonies, will have this blotch. It could depend on the light but I really don’t know. 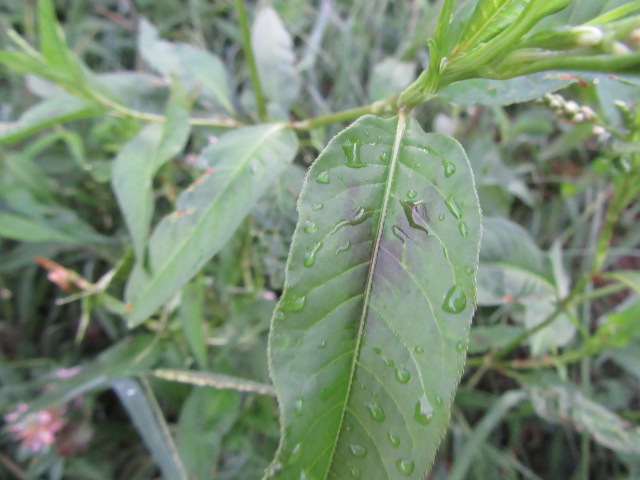 We had before I took the photos on August 30 which is why the leaves are wet.

I was glad to see a lot of flowers open on the Persicaria pensylvanica on September 1. Most Persicaria species flowers do not open but they self-pollinate anyway inside the “bud”. Weird.

As I mentioned previously, flowers have 5 tepals and have no petals. Inside the flowers are 10 stamens and a pistol. No, I didn’t count the stamens. I am taking the Missouri Plants websites word for it. 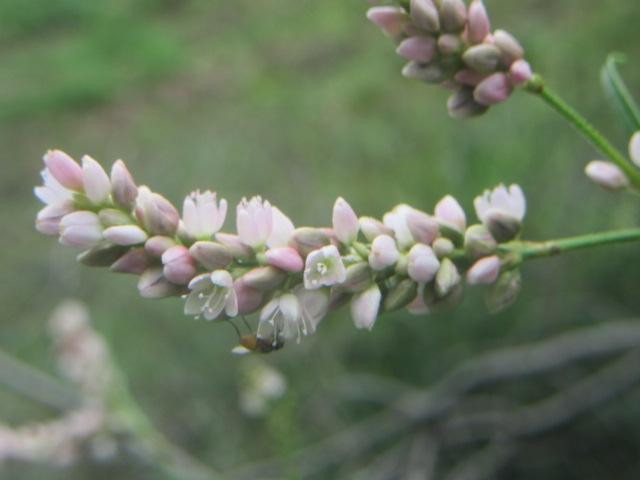 I was finally able to take a close-up photo of the hairs on the upper stems. I had taken photos earlier of longer, rather fuzzy stems, but they came out blurry. 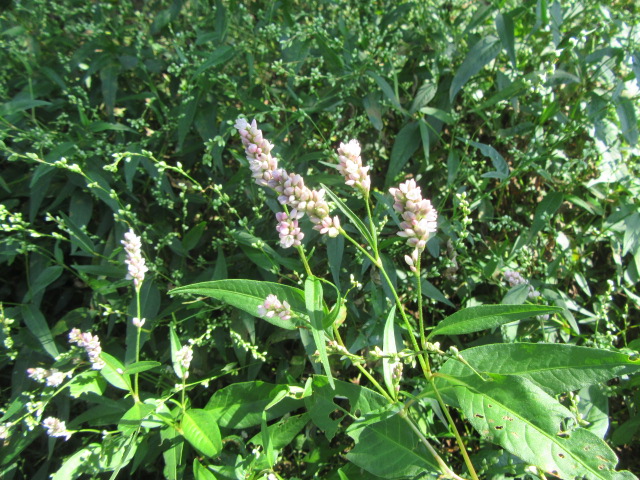 The colony above is growing next to the Mulberry tree in the front pasture among a colony of P. punctata and a few P. longiseta.

By September 22, the colony behind the barn in the brush pile had nearly had enough and was beginning to fizzle out.

The colony by the gate was still going strong. 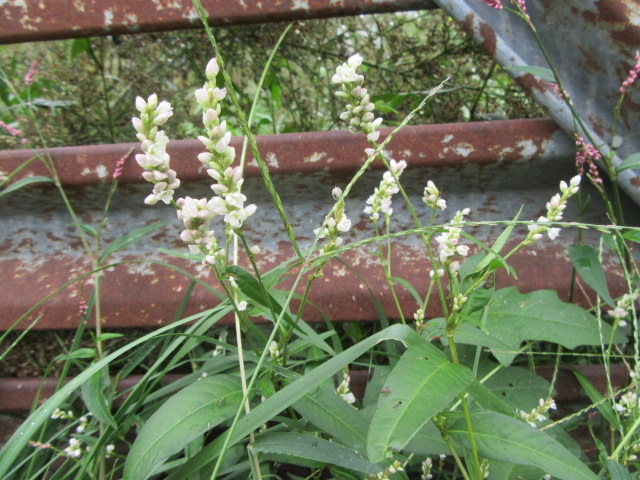 I could write a lengthy description for this photo, but I am exhausted now. 🙂

I enjoyed the experience of identifying the seven species of Persicaria growing on the farm. You can read the post about them all by clicking HERE where you will also find links to their own pages.

I have enjoyed photographing and learning about the many wildflowers growing on the farm and other areas. I have grown over 500 different plants and most have pages listed on the right side of the blog. I am not an expert, botanist, or horticulturalist. I just like growing, photographing, and writing about my experience. I rely on several websites for ID and a horticulturalist I contact if I cannot figure them out. Wildflowers can be somewhat variable from location to location, so sometimes it gets a bit confusing. If you see I have made an error, please let me know so I can correct what I have written.