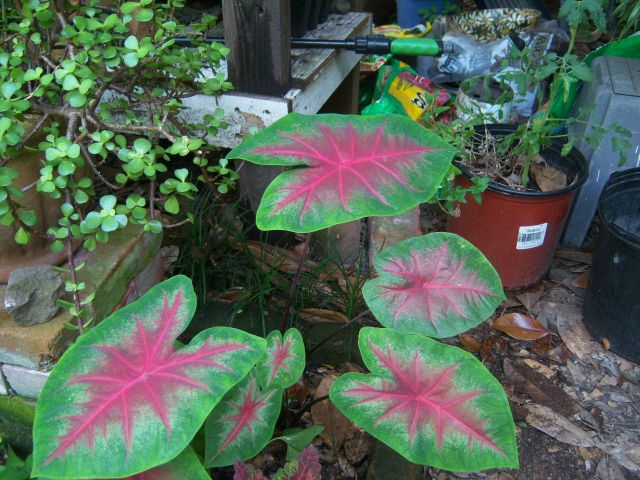 Caladium bicolor (Aiton) Vent. is the correct scientific name for this Caladium species. It was named and described as such by Étienne Pierre Ventenat in Description des Plantes Nouvelles in 1801*. It was first described as Arum bicolor by William Aiton in Hortus Kewensis in 1789.

*The International Plant Names Index (IPNI) says the description of Caladium bicolor was first described by Ventenat in Description des Plantes Nouvelles in 1801. Tropicos says he first published his description in Magazin Encyclopédique in 1800 (Dec. 22, 1800-Jan. 21, 1801).

I usually include a list of synonyms, but there are 91 listed on Plants of the World Online (as of 1-11-21)… The last update listed 117. Heck, at one time there were 153! You can check out the list on POWO by clicking HERE.

The genus, Caladium Vent., was named and described by Étienne Pierre Ventenat in Magazin Encyclopédique in 1801.

Plants of the World Online by Kew lists 20 species in the Caladium genus(as of 1-11-21 when I am updating this page). It is a member of the plant family Araceae with 140 genera. Those numbers could change as updates are made.

The genus Caladium shares the Araceae Family with Colocasia, Alocasia, Arum, Amorphophallus, Dieffenbachia, Dracunculus, Sauromatum, Spathiphyllum, Syngonium, Xanthosoma, and Zantedeschia. Those are some of the more well-known genera of the family. Many are commonly known as Elephant Ears among other shared names. 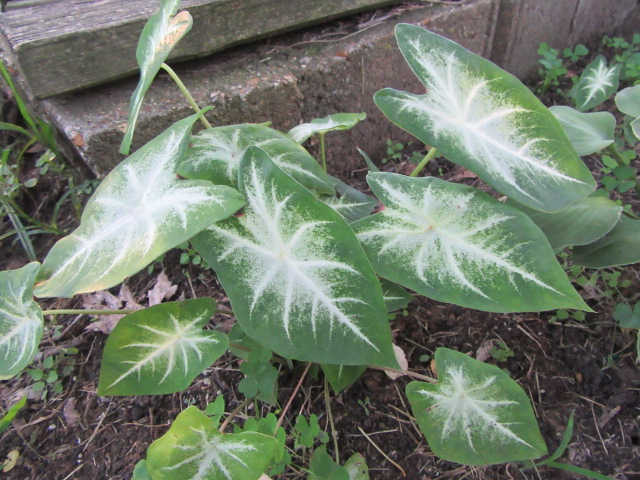 As the leaves get larger on the Caladium ‘Aaron’, they turn more white. 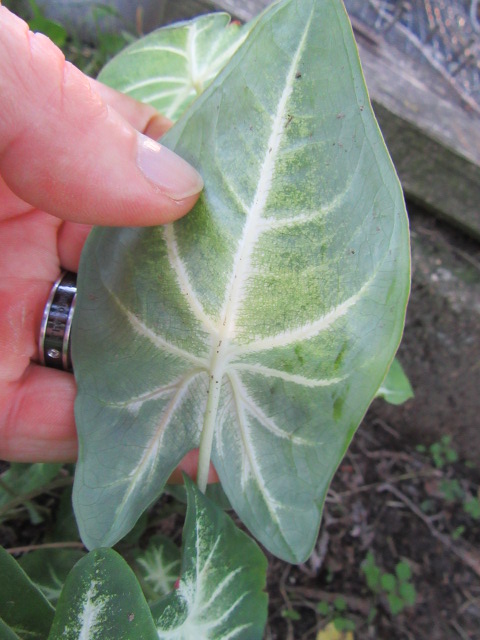 According to the 2013 version of The Plant List, the genus Caladium contained 14 accepted species 109 synonyms (206 including infraspecific names), and 17 unresolved names. Wikipedia says there are 7 species… They are native to South and Central America and have naturalized in India, parts of Africa and various tropical islands. In the wild, they grow in open areas of the forest and on river banks. Various species can grow from 15 to 36″ tall. The Philippines also has a species that looks similar that can be found growing in the wild that people dig up and bring home.

I think Caladium ‘Freida Hemple’ has been around for a while, or at least this color combination.

Caladiums are very widely grown as an ornamental plant in many parts of the world and are used in bed and container plantings. There are HUNDREDS of cultivars in many colors. Caladium bulbs are widely available or you can buy plants at just about any garden center and many other choices are available online. Bulbs can be taken up in the fall and easily stored for the next spring.

I bought the bulbs for Caladium ‘John Peed’ from Wal-Mart in the spring of 2017. They were very slow to emerge, but eventually, most of them did come up.

I started noticing what the undersides of leaves look like this year. Sometimes the undersides, as with the Caladium ‘John Peed’ above, is as interesting as the face of the leaf.

I bought the rest of my Caladiums from Wagler’s Greenhouse. They usually have a nice selection, but kind of pricey at first. If I wait a few weeks they usually have them on sale. She said hers didn’t come up well this spring either. Above is the beautiful Caladium ‘Strawberry Fields’. It was awesome for a long time, then the heat and dryness of the summer took a toll on it.

The above photo shows what the underside of the leaf of the Caladium‘ Strawberry Fields’ looks like.

The summer is coming close to an end as I am writing this page on September 21, 2017. The Caladiums have done well for the most part, but I did neglect them from time to time. Caladiums need consistently moist soil and I am afraid they didn’t always have that.

I stored the Caladium bulbs over the winter in the basement, but when I went to plant them in the spring they were kind of moldy. Even so, I planted them but they did not come up. I did not purchase any plants or bulbs in 2018.

I haven’t been able to find any Caladium plants locally for a few years so I may have to buy more bulbs (rhizomes, or whatever you call them). Mrs. Wagler from Wagler’s Greenhouse said she hasn’t had any luck growing them for a few years.

I hope you enjoyed this page and maybe found it useful. If you have any comments, questions, or suggestions, I would like to hear from you. Please click on “like” if you visited this page. It helps us bloggers stay motivated. 🙂 You can check out the links below for further reading. The links take you directly to the genus and species of this plant. If you notice I made an error, please let me know.