The genus, Pelargonium L’Hér. ex Aiton, was described as such by William Aiton in Hortus Kewensis in 1789. The genus was first named and described as such by Charles Louis L’Héritier de Brutelle. Mr. Aiton gave credit to him for naming the genus and possibly used his description.

Plants of the World Online lists 283 species in the Pelargonium. genus (as of 2-10-21 when I last updated this page. Up from 251 on the last update. It is a member of the plant family Geraniaceae with 8 genera. Those numbers could change as updates are made.

I grew my first of these while I was living with Dr. Skinner in Carson, California. Then when I moved back to Missouri, I bought one in 2014 and another one in 2016 from Wagler’s Greenhouse. 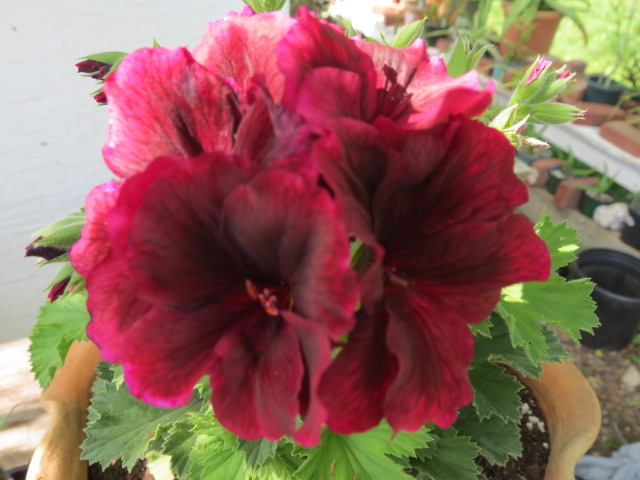 They are really nice plants that come in a variety of color combinations. They are best grown as an annual but are winter hardy in USDA Zones 10 and 11. They require a minimum of maintenance, just removing spent flowers and dead leaves. They can grow up to 3’ tall x 2’ wide.

It is said that they need consistently cool nights for flowers to form, but here in mid-Missouri, it did very well for me throughout the summer. They like full sun, but I have found that they do best when given shade in the heat of the day. Mine grew perfectly well in dappled shade under the Elm tree.

I normally don’t take mine inside for the winter, but it is possible to overwinter them as a houseplant. They should be placed in a bright, sunny window in a cool area and reduce watering. They can also be brought inside before frost and placed in a dark, cool location in the basement and allowing them to go dormant. You can also take cuttings of your plants to overwinter inside.

I haven’t bought any of these plants home from the local greenhouse since 2016 but I did use one in a friends planter a couple of years ago. They are great plants and their flowers are AWESOME!