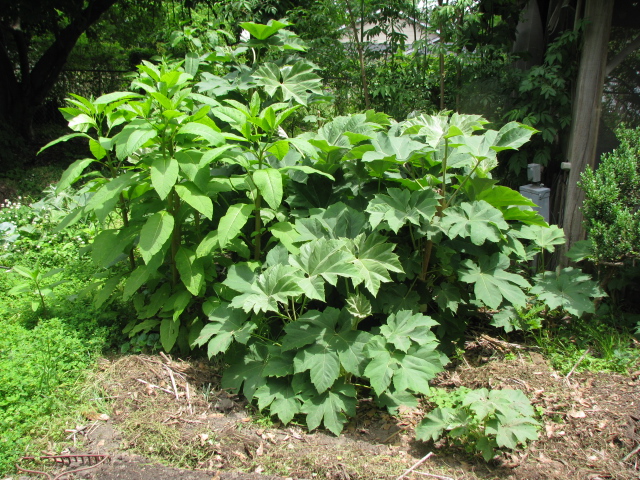 Tetrapanax papyrifer (Rice paper Plant) in the backyard at the mansion in Mississippi on 5-1-09, #9-52.

Tetrapanax papyrifer (Hook.) K.Koch is the accepted scientific name for the Rice Paper Plant. Both the genus and species were named and described as such by Karl Heinrich Emil Koch in Wochenschrift für Gärtnerei und Pflanzenkunde in 1859. It was first named Aralia papyrifera by William Jackson Hooker in Hooker’s Journal of Botany and Kew Garden Miscellany in 1852.

As of 11-14-22 when this page was last updated, Plants of the World Online by Kew lists only 1 species in the Tetrapanax genus. It is a member of the plant family Araliaceae with 46 genera. Those numbers could change as updates are made on POWO.

The peeled and dried pith from this plant is used to make pith paper, which some call rice paper. Rice paper is also made from other sources. The Rice Paper Plant is used in traditional Chinese medicine and as an ornamental. 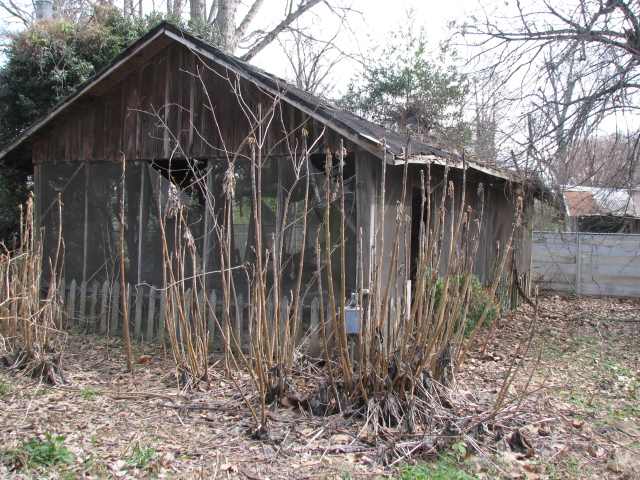 When I moved to the mansion with Dr. Suzanne Skinner in December 2008 the backyard was a disaster. No one had lived in the mansion for several years and it had been even longer since the backyard was maintained. I had no idea what these plants were along the old covered patio at the time. Later, a grandson of the former owner told me they were Rice Paper Plants. He told me they would come up everywhere. 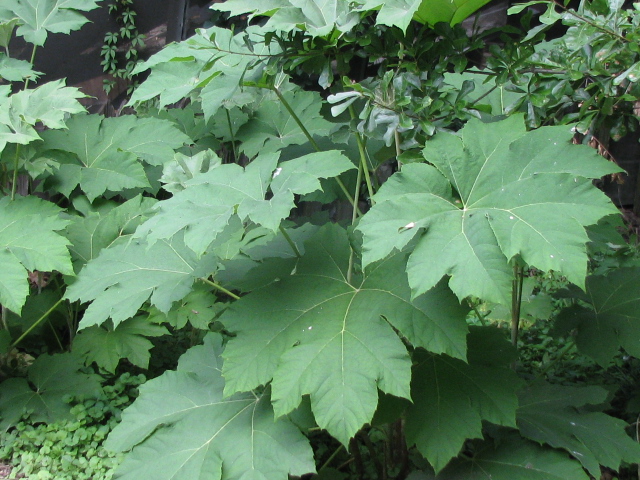 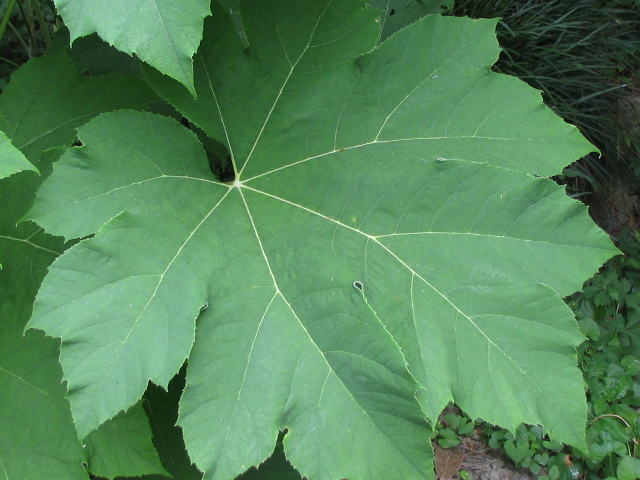 When the temperatures started warming up, the Rice Paper Plants started coming up and we got acquainted. At first I thought, “WOW, these plants are AWESOME”. I always loved big, unusual plants and these certainly were that. And, yes, they were popping up out in the yard. 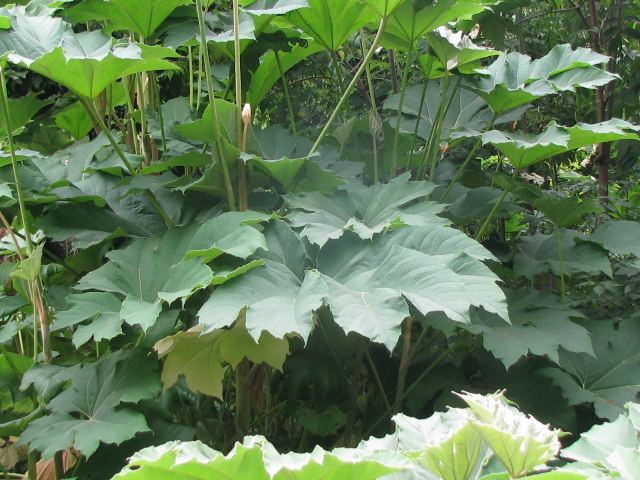 The undersides of the leaves are covered with fine white hair that can irritate the eyes and skin. The stems of the plant and flower clusters are covered with this stuff that resembles thick powder or mold. I read where it can be a lung irritant and if you work around this plant, this coating easily comes off. 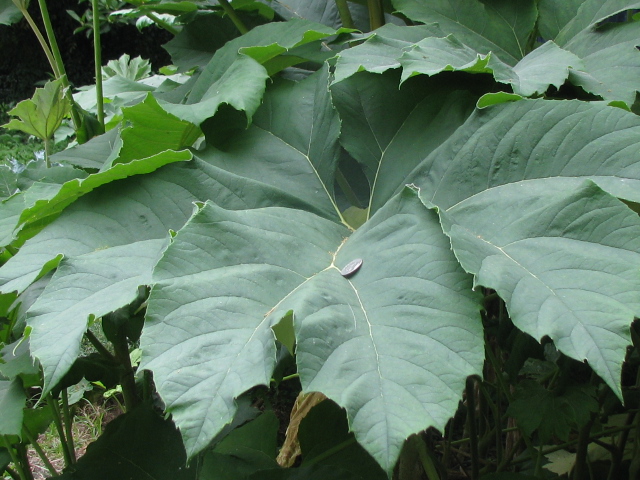 Just to show how large the leaves were, I placed a quarter on one and took this photo. 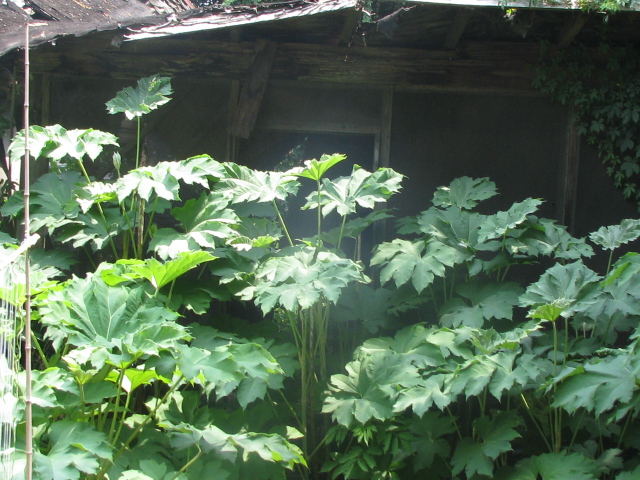 It is a very hardy plant and will spread ridiculously by seed and rhizomes. Once you have it, it can be hard to get rid of. I tried. It was not uncommon for plants to pop up 20 feet or so away from where they were originally growing. While it was a nice plant, don’t get me wrong, but I had other plans for where it was growing. 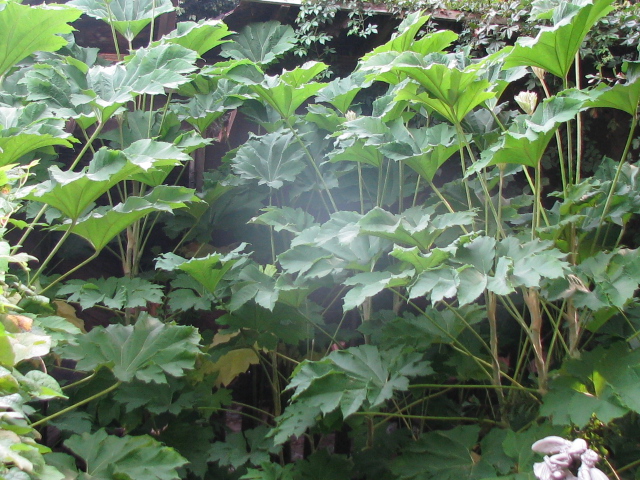 Although the Tetrapanax papyrifer prefers rich, consistently moist soil, they are also very heat and drought tolerant. I never watered these plants and they never hesitated one bit. 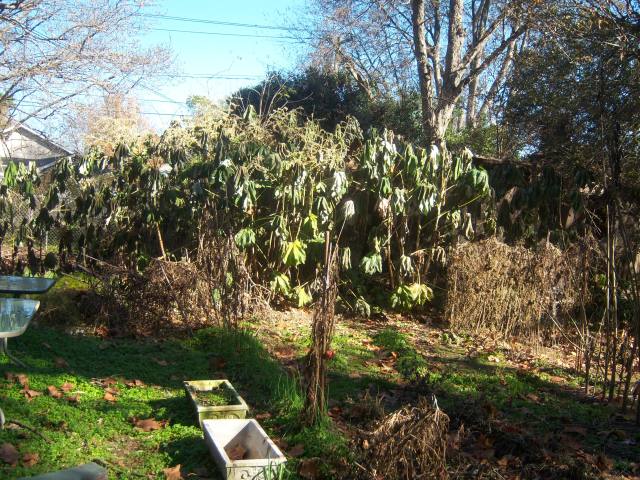 After our first frost, the Rice Paper Plants were no more. They were back again the next spring in full force. 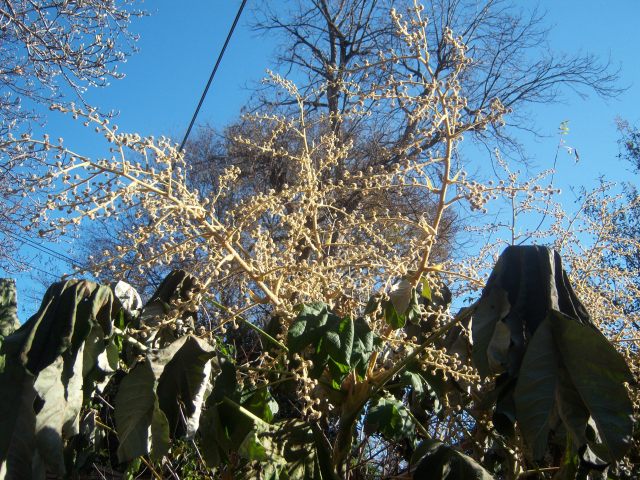 The Rice Paper Plant was a late bloomer and we always had a killing frost before the seeds could mature.

While this plant may be perennial in my hardiness zone here in mid-Missouri, I doubt very seriously if I will try them here.