Amphicarpaea bracteata (American Hog Peanut) on 9-2-22, #908-1. Most of the leaves are from Japanese Honeysuckle.

Amphicarpaea bracteata (L.) Fernald is the accepted scientific name for the American Hog Peanut. It was named and described as such by Merritt Lyndon Fernald in Rhodora; Journal of the New England Botanical Club in 1933. It was first described as Glycine bracteata by Carl von Linnaeus in the second volume of the first edition of Species Plantarum in 1753.

The genus, Amphicarpaea Elliott ex Nutt., was described by Thomas Nuttall in The Genera of North American Plants in 1818. He gave credit to Stephen Elliott for previously naming the genus.

As of 10-1-22 when this page was published, Plants of the World Online lists three species in the genus Amphicarpaea. It is a member of the plant family Fabaceae with 780 genera. Those numbers could change as updates are made on POWO. 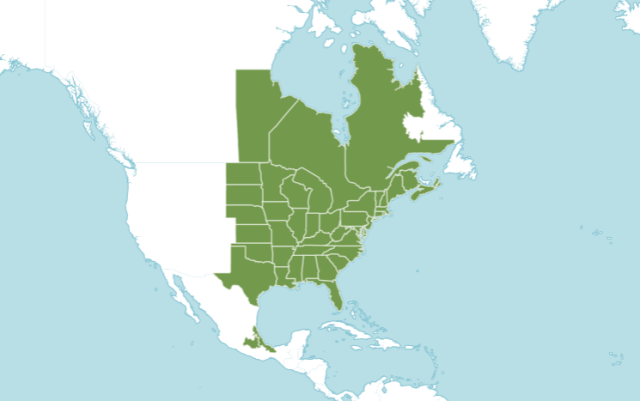 Distribution map of Amphicarpaea bracteata from Plants of the World Online. Facilitated by the Royal Botanic Gardens, Kew. Published on the Internet; http://www.plantsoftheworldonline.org/. Retrieved on September 30, 2022.

The above distribution map for Amphicarpaea bracteata is from Plants of the World Online. Areas in green show where the species is native. The map on the USDA Plants Database is similar and also includes the state of Montana (with no data) and Wyoming from a sighting in one county.

THERE ARE SEVERAL LINKS AT THE BOTTOM OF THE PAGE FOR FURTHER READING AND TO HELP WITH A POSITIVE ID. 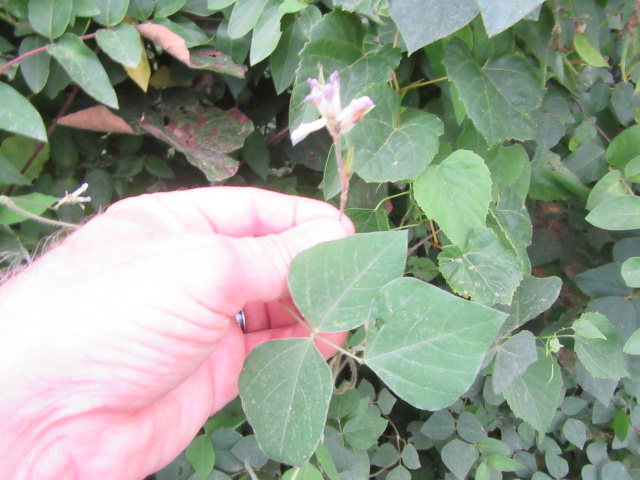 Hello, everyone! On September 2, I was walking along the fence on the south side of the farm looking at the Hops vine when I noticed something weird I had not seen before. The fence is covered with Japanese Honeysuckle but these strange-looking flowers were also in the mix. Well, it was quite obvious they weren’t from the honeysuckle, so I started looking for other leaves. I finally found a few plus some seed pods. The leaves are trifoliate like a bean.

I had not encountered this species before, so I uploaded the photos on iNaturalist. It turned out to be Amphicarpaea bracteata, commonly known as the American Hog Peanut or simply Hog Peanut. I didn’t read much about them until I wrote this page, so I was somewhat confused why it was called a Hog Peanut.

First, I want to apologize for not writing descriptions when I wrote this page. I update and write new pages over the winter when I am not so busy outside. I just wanted to write a little about this strange species.

Apparently, this species produces two types of flowers and the genus name is Greek for “two-seeded” referring to two types of seeds… Above and below ground. Hold on a minute! Above and below ground?!?!?! It not only produces two types of seed, but also two types of flowers. Flowers that grow on the vine, and flowers that grow from stems that creep along the ground. While the upper flowers are normal (chasmogamous, the lower flowers are cleistogamous, which means fertilization occurs inside a permanently closed flower. These flowers are inconspicuous and have no petals… If I knew that at on September 2, I would have looked around for lower flowers. Here it is October 1, so I need to go back to the fence to see if I can find any. GEEZ!

The fruit (seed pods) of the upper flowers contain 2-3 seeds, while those of the lower flowers only have one. What is even weirder, is that they burrow into the ground. Information I read on one site (Climbers by the University of Michigan) that E.J. Trapp’s description in the American Journal of Botany (1988) says “runners (ground level stems) are produced that search out dark crevices in the soil. If these are found, the plant produces an underground flower.” How weird is that?

I found it in a spot I hadn’t noticed before climbing up ragweed. Three leaves like a bean, kind of heart-shaped, with smooth margins. Not like Poison Ivy… 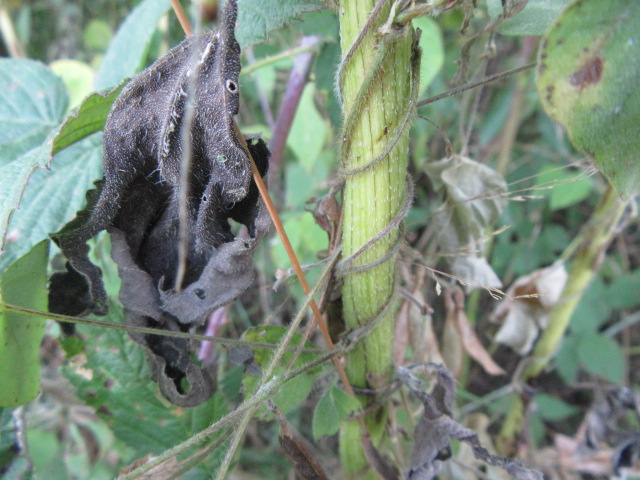 I did manage to find four seed pods in a cluster…

Yep, the seeds are small.

I live on a small farm in Windsor, Missouri where I enjoy gardening, collecting plants, and identifying wildflowers. The farm is in Pettis County but Henry County is across the street, and Benton and Johnson aren’t far away. I have grown over 500 different plants and identified over 200 species of wildflowers (most have pages listed on the right side of the page). I am not an expert, botanist, or horticulturalist. I just like growing, photographing, and writing about my experience. I rely on several websites for ID and a few horticulturalists I contact if I cannot figure them out. Wildflowers can be variable from location to location, so that can be a bit confusing. If you see I have made an error, please let me know so I can correct what I have written.

NOTE: The data (figures, maps, accepted names, etc.) may not match on these websites. It depends on when and how they make updates and when their sources make updates. Some websites have hundreds and even many thousands of species to keep up with. Accepted scientific names change periodically can be hard to keep with as well. Some of the links may use a name that is a synonym on other sites. In my opinion, Plants of the World Online by Kew is the most reliable and up-to-date plant database and they make updates on a regular basis. I make updates “at least” once a year and when I write new pages or add new photos but I do get behind. We are all a work in progress. 🙂