Alocasia have been one of my favorite group of plants to grow since the spring of 2009. I bought my first five Alocasia from Wellspring Gardens as starter plants. They included Alocasia macrorrhizos ‘Borneo Giant’, Alocasia ‘Portora’, Alocasia brancifolia, Alocasia lauterbachiana, and Alocasia portei. Suzanne had bought a pot of Alocasia Amazonica from Lowe’s in December 2008 or January 2009.

I kept the Alocasia Amazonia in a pot, but I transplanted the others under a Crape Myrtle tree behind the den.

Later, I moved them along the wall by the west sunroom. I had found out that they needed to be brought inside before temps dropped below 45 or they would not survive, so when cooler weather started coming I dug them up and put them in pots. Not knowing much about Alocasia at the time, several rotted before the next spring (2010). Alocasia ‘Borneo Giant’, Alocasia ‘Portora’ and Alocasia lauterbachiana were the only survivors. The ‘Borneo Giant’ continued to overwinter until 2011 then I guess it didn’t survive the 2011-2012 winter because there are no photos in 2012. Alocasia lauterbachiana (I brought it to Missouri) survived until the winter of 2013. I still have descendants of Alocasia ‘Portora’ although I gave up the original plant when I moved back to Missouri in February 2013 because it was too large. I should have just cut the leaves off and brought it anyway. I also gave the Alocasia Amazonica to a friend when I moved. 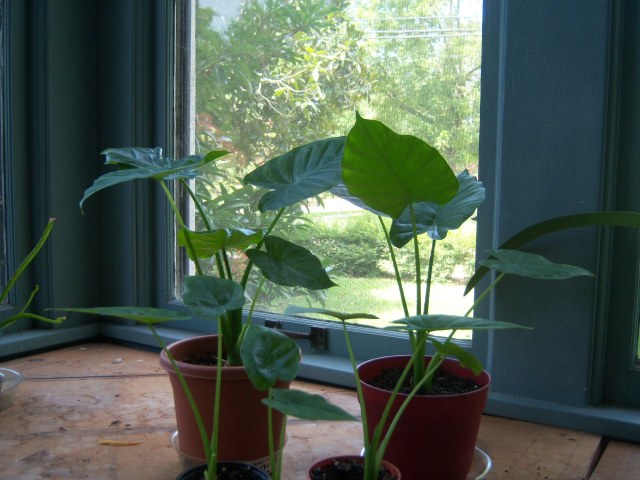 In 2011 I was asked to keep several HUGE plants for a couple that were very good friends. One of her plants was a HUGE Philodendron bipinnatifidum. In the spring of 2012, I noticed small plants coming up in the pot so I removed them and put them in their own pots. I thought possibly they were babies of the plant. As it turned out they were Alocasia of some sort. I sent photos to an Aroid expert and he said he thought they were Alocasia odora. Well, it is 2017 as I am writing this page, and I still have the descendants of that VERY productive species. However, Alocasia odora gets HUGE and is known as the Giant Upright Elephant Ear. Mine has only grown to around 20″-24″ tall. SO, I wondered if it were perhaps Alocasia gageana which is the Dwarf Upright Elephant Ear. I joined an Aroid group on Facebook and posted photos and several members agreed it was indeed Alocasia gageana. When the “expert” guessed it was an Alocasia odora it was when the plants were still young so we had no way of knowing how tall it would ultimately get. The leaf shape of both Alocasia gageana and Alocasia odora are very similar but ultimately much different in size.

In the spring of 2012, I bought an Alocasia ‘Mayan Mask’ from Brent and Becky’s. I also bought several more from Wellspring Gardens including Alocasia ‘Calidora’, Alocasia ‘Sarian’, Alocasia macrorrhizos ‘Black Stem’ and Alocasia boa.

SO, when I moved back to mid-Missouri in February 2013, I brought with me the largest of the original Alocasia ‘Portora’s’ babies, Alocasia ‘Calidora’, Alocasia ‘Mayan Mask’, Alocasia lauterbachiana, Alocasia boa, and Alocasia ‘Sarian’. I had given the Alocasia macrorrhizos ‘Black Stem’ to a friend in Mississippi (as well LOTS of other plants).

Dormancy in some of the less hardy, and even the more hardy species and hybrids, is something you really need to avoid, at least in my opinion. They aren’t like Colocasia in that respect where they are allowed to get a frost then dig them up. For me, they have to be kept in pots and brought inside when the temps start dropping to close to 50 degrees to keep them from going dormant. Most of them do just fine in the basement over the winter but Alocasia lauterbachiana, boa and ‘Sarian’ did not approve.

Alocasia boa was really weird and went dormant, probably because of the cold trip to Missouri. It did come back up in July 2013 but struggled then didn’t last through the winter.

Alocasia lauterbachiana did just fine until it decided to go dormant after I came to Missouri. It came back up in July 2013, but then completely died in 2014, I think…

SO, as I am writing this page in late August 2017, I still have Alocasia ‘Portora, Alocasia ‘Calidora, Alocasia ‘Mayan Mask’ and Alocasia gageana. They are doing AWESOME and having more babies than I care to mention, especially the later. 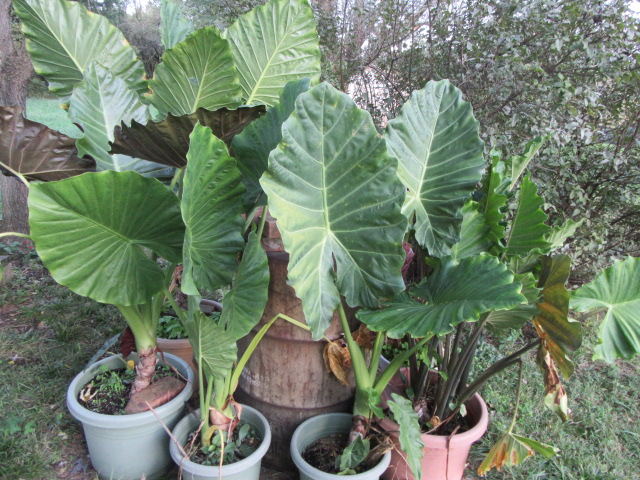 The group of Alocasia did very well over the summer in 2017. Soon cooler weather would come and they will be moved to the basement for the winter again. 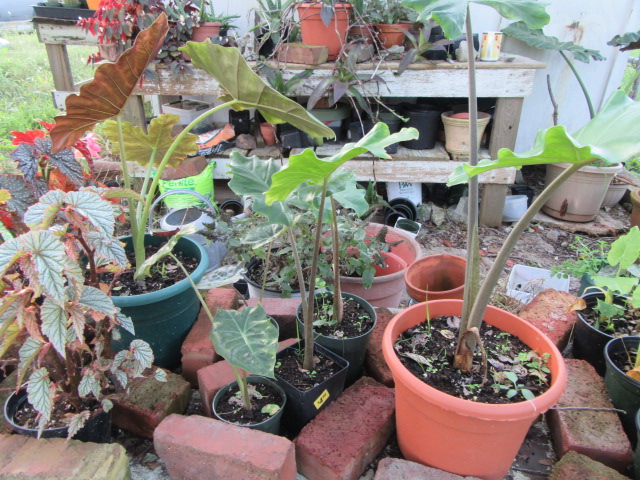 Sometimes I get busy and don’t get the offsets removed soon enough and they get quite large… Then I have to find bigger pots! The re-potting project should have been done in the spring because a lot of the time the smaller Alocasia either go dormant during the winter or they don’t make it. 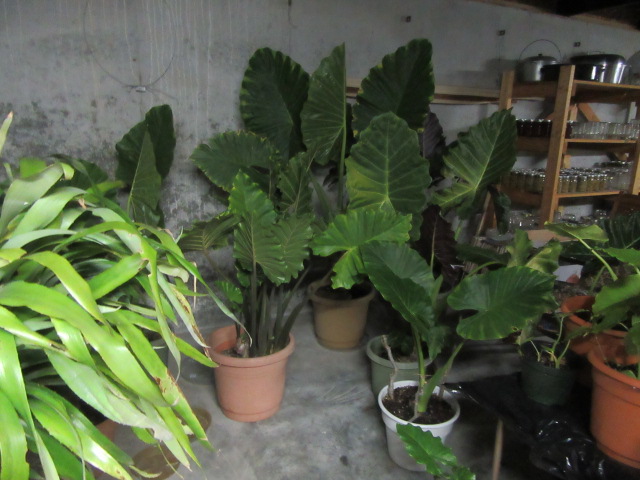 Once the nighttime temperatures drop to about 50 degrees (F) I move the Alocasia and other potted plants to the house. The Alocasia always do surprisingly well overwinter in the basement.

The Alocasia were still looking very well in January. It was a very cold January so they were happy to be inside. 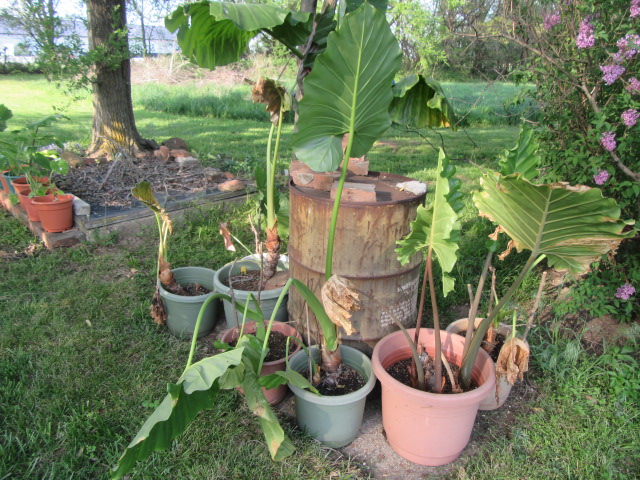 Yeah, I know… The Alocasia look a little frazzled after being in the basement over the winter. But at least they do survive. Soon they will be looking MUCH better. 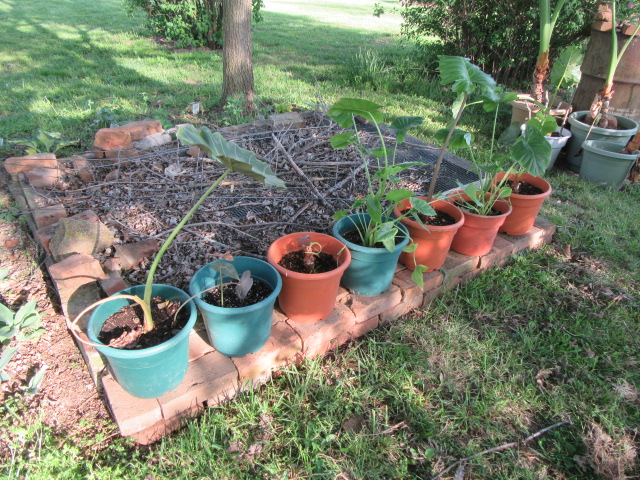 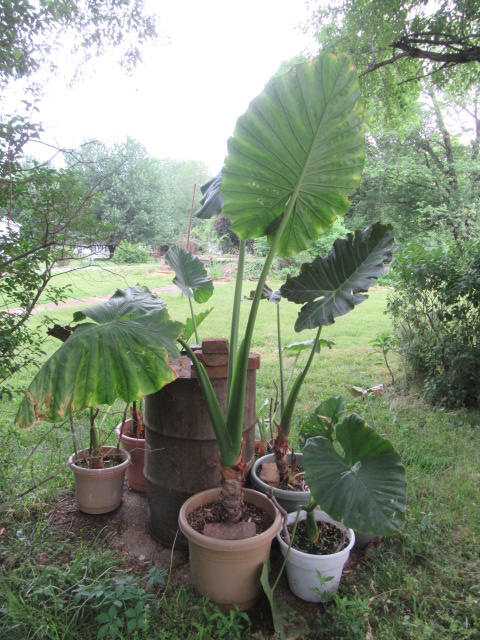 I decided to experiment a little and put a medium sized Alocasia ‘Mayan Mask’ (left), ‘Portora’ (center), and ‘Calidora’ (right) in the bed beside the old foundation. This is where I normally have the smaller Colocasia esculenta. I wanted to see how big they would get without being confined to a pot.

The bigger Alocasia were looking pretty good after a couple of months being outside. I need to do more re-potting. Some of them have outgrown their pots and need to be in bigger pots and several offspring need to be removed. 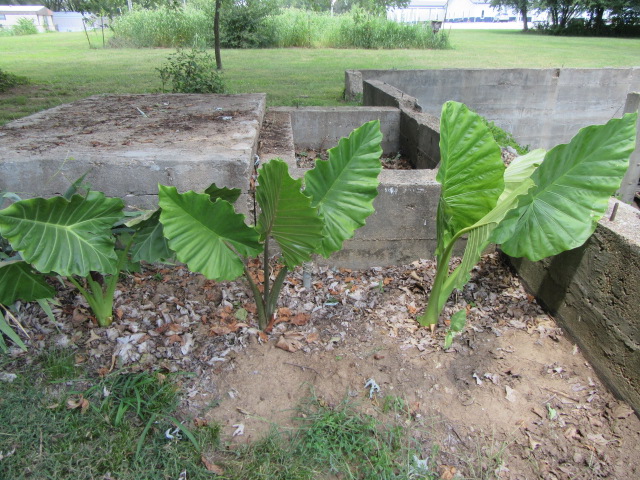 Well, the three Alocasia by the old foundation are still doing good. They are growing somewhat crooked because of the shade from the Maple trees. Since they aren’t in pots, I can’t rotate them.

I will keep adding more group photos on this page as time goes by.

This is the list of Alocasia I have grown or are growing. You can click on the name and be directed to their own page:

I hope you found this page and the pages about the Alocasia I have grown useful. You can check out the links below for further reading. Please leave a “Like” if you have visited this page. It helps us bloggers stay motivated. 🙂 If you have any comments, questions, or suggestions, I would like to hear from you.

FOR FURTHER READING:
PLANTS OF THE WORLD ONLINE
WIKIPEDIA
EASY TO GROW BULBS