MISLABELED BY THE INDUSTRY AS
Kalanchoe beharensis minima

The genus, Kalanchoe Adans., is the correct and accepted scientific name for this. It was named and described as such by Michel Adanson in Familles des Plantes in 1763.

As of 11-18-21 when this page was last updated, Plants of the World Online by Kew lists 157 accepted species in the Kalanchoe genus. It is a member of the plant family Crassulaceae with 36 genera. Those numbers could change as updates are made on POWO.

I bought this AWESOME plant from Lowe’s in Greenville, Mississippi on 8-24-12 while living at the mansion in Leland. I had been plant shopping with a couple of friends the night before and found this plant. The price tag was a whopping $20.00! I carried it around in the store for more than an hour while pushing around the other plants I picked out in the cart. I was really debating paying that much for this plant. GEEZ! I had never paid that much before. Then as we were getting really to leave, my friends encouraged me to go ahead and buy the plant. So, I brought it home.

Although the plant was labeled Kalanchoe beharensis minima, there is no such accepted scientific name. I am not sure where Altman Plants came up with the name “minima”. There are several other websites that offer this plant with minima as a cultivar name. I also read where it is possibly a “dwarf” for of Kalanchoe beharensis.

Kalanchoe beharensis has these AWESOME, large velvety leaves that always reminded me of mohair seats. May you don’t remember mohair seats but many old cars had them. These leaves also reminded me of the seats in the old theater. Isn’t it strange how something triggers your memory? 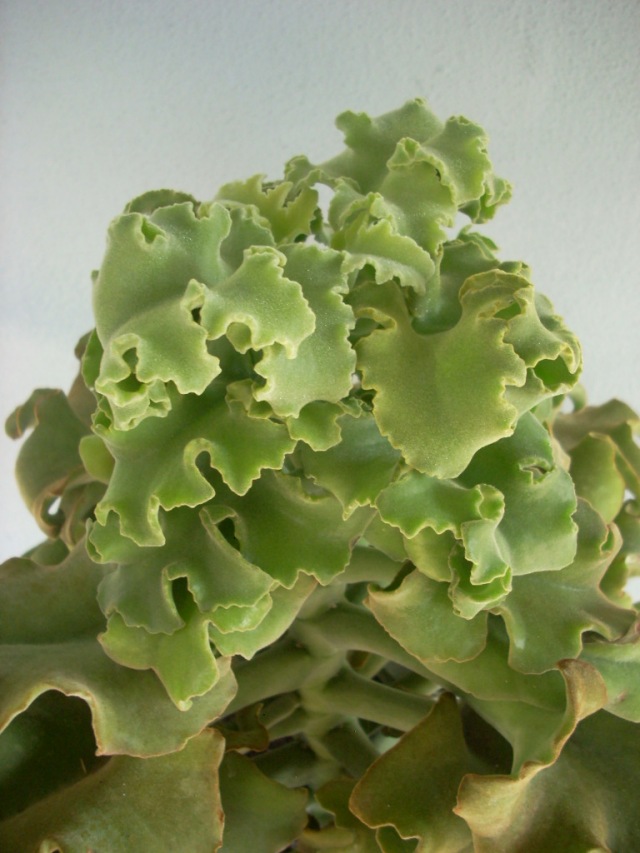 My new Kalanchoe friend and I got along really well and it had this growth spurt.

There are many potting soil recipes online but used 2 parts Miracle Grow Potting Soil with an additional 1 part perlite and 1 part chicken grit for several years. I switched to using a 50/50mix of potting soil and pumice in 2018. You just have to experiment… With any peat-based mix, the potting soil can get hard over the winter months when you stop watering as often. You can re-pot your cactus and succulents in the fall with a fresh, loose potting mixture so it won’t be hard over the winter months while your plants are inside. Kalanchoe won’t need any water during the winter unless you notice their leaves start to shrivel or wrinkle then you can give them a little.

Kalanchoe beharensis is a slow-growing succulent shrub native to southwestern Madagascar. They can get fairly large, reaching around 9’ or even to 12’ tall in the right conditions. As it gets taller, the lower leaves fall off leaving scars where the petiole was attached.

You can actually break a leaf, even leaving it hanging, and new plantlets will grow from it. 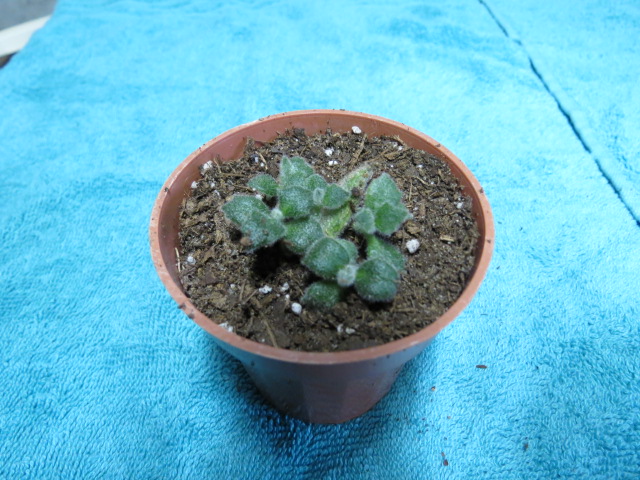 I sold the mansion to a group that turned it into a nice bed and breakfast. Dad asked me to move back to the family farm in mid-Missouri so I did. I had to give up several hundred plants. I kept most of my cactus and succulents, Colocasia, Alocasia and several other plants. Unfortunately, for some reason, I thought I should leave my bigger plants, including the Kalanchoe beharensis with a friend. I did take a leaf cutting which grew into several plantlets.

I kept the little Kalanchoe beharensis in this pot on the kitchen windowsill all summer with a few other succulents I didn’t want to put outside. I watched them grow and then I noticed something weird. I had taken cuttings of the Kalanchoe beharensis ‘Fang’ during the summer but they were outside. Somehow, these guys turned out to have the tubercles on the underside of the leaves, too. I know 100% I took a leaf from the Kalanchoe beharensis and NOT ‘Fang’ when I moved from Mississippi. I know I didn’t take cuttings from ‘Fang’ until the summer of 2013 because I brought the plant with me. So, tell me, how did these plants turn out to have fangs? What a mystery!

I gave up most of my succulents later in the summer of 2014 now I am starting over. Hopefully, someday I will find another Kalanchoe beharensis to bring home. 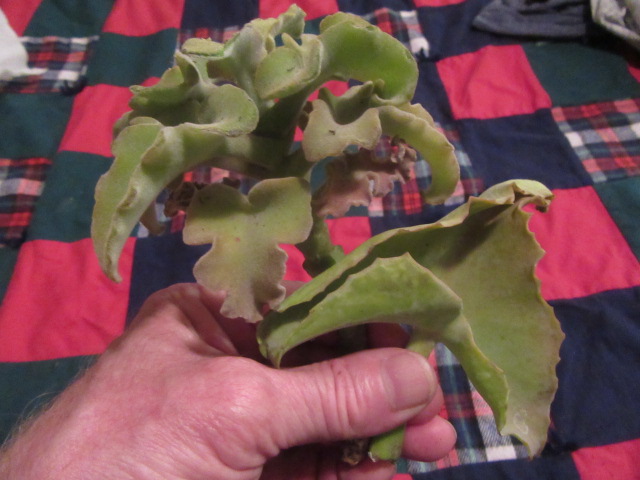 I was happy when a reader of this site offered to send me a cutting from her Kalanchoe beharensis. I had written a post about the Kalanchoe and mentioned I wanted another one of these plants. I was really surprised when the box came and it not only had a leaf but an entire plant. That was a good thing, because the leaf didn’t make it…

By June 24 the plant was still alive and well. Kalanchoe beharensis are such neat plants. 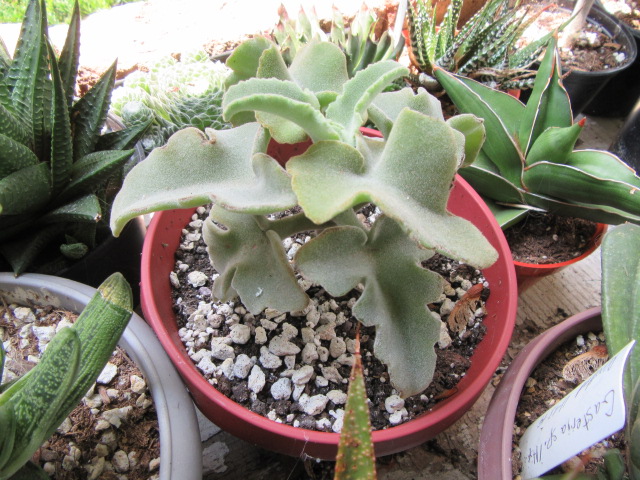 Still looking GREAT on July 20. It has grown a little and measured 4″ tall. 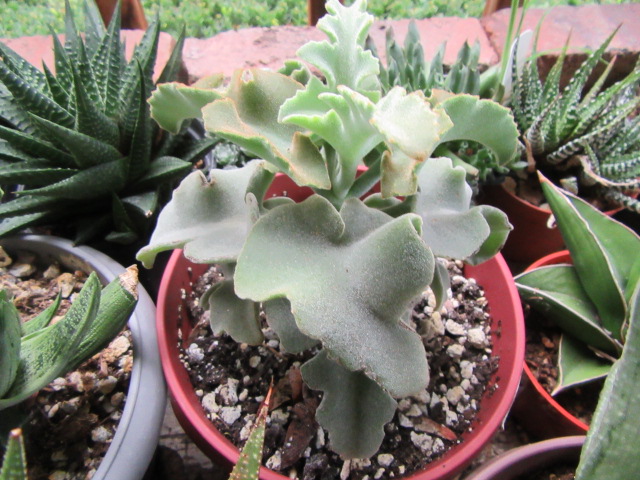 I was taking photos and measurements for a post on August 17 so I had to take another photo of the Kalanchoe beharensis. I usually take measurements of the potted plants when I move them inside for the winter in October… This plant grew another 1 1/2″ in about a month. 🙂

There are a couple of varieties and cultivars mentioned on the LLIFLE (Encyclopedia of Living Forms) website including ‘Roseleaf’ which is a hybrid of Kalanchoe beharensis and Kalanchoe tomentosa. It is thought that ‘Fang’ could be a sport of ‘Roseleaf’.

I watched this good video on YouTube by Bill B. on the PlantzNThings channel. There are other videos about the Kalanchoe beharensis.

I hope you found this page useful. If you have any comments, questions or suggestions I would like to hear from you. Please click on the “Like” below if you have visited this page. It helps us bloggers stay motivated. Check out the links below for further reading.