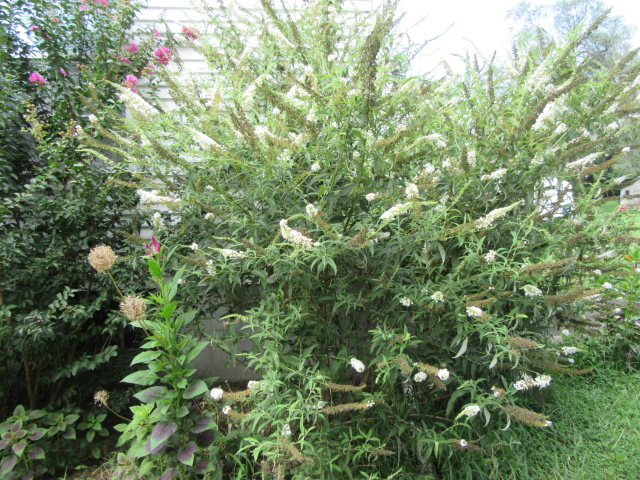 The genus Buddleja was named and described by Carl von Linnaeus in Species Plantarum in 1753. Dr. William Houston suggested Linneaus name the genus in honor after Reverend Adam Buddle, an English botanist and clergyman who died in 1715. Dr. Houston sent the first Buddleja plants to England from the Caribbean which came to be known as Buddleja americana.

Of course, the common name is Butterfly Bush, and the correct and accepted scientific name is Buddleja. Buddleia is an acceptable alternate spelling and many people and websites use it.

According to Plants of the World Online, there are 130 accepted species in the Buddleja genus. They are native to many parts of southwest United States, Mexico, Central America, Africa, the Middle East, Asia, and so on. It’s a long list.

Buddlleja are important in nature and the landscape because of their beauty and they feed butterflies, bees, hummingbirds, hummingbird moths, and other pollinating insects. My Buddleja is usually swarming with life, especially later in the summer.

The Buddleja genus was in the Buddlejaceae family, but that family is no longer recognized by the Angiosperm Phylogeny Group. The old family is still being used by many botanists as one of several families that divide the Lamiales order of plants. The APG says divisions within the group are unsatisfactory and a major revision will probably occur soon… Just like what happened with the order Asparagales (but I am not going to get into that here).

While I am sure circumstances vary from location to location and you, as a gardener, know what is best for your plants in your climate. The following is just a guide I recently found and not necessarily what I have practiced yet. I planted my first Buddleja in the spring of 2013 and it has done well. Without knowing anything about them at first, it was just instinct and following a few instructions. Primarily, planting in full sun and pruning in the spring.

1) PLANT IN FULL SUN: Even in warm climates, Buddleja’s need a minimum of 6 hours of sun per day. Some websites say full sun to part shade and my Buddleja ‘Pugster® Blue’ was in light to part shade all summer and it still flowered and did well.

2) SPRING PLANTING IS PREFERRED: It is especially recommended to plant your Buddleja in the spring if you live in a colder climate. They may be susceptible to winter damage thus planting in the spring allows them to become well established before winter. (Well, I screwed up on that one with my ‘Pugster Blue’…).

2) PERFECTLY WELL-DRAINED SOIL: Buddleja are sensitive to rotting and they will not tolerate wet feet.

3) AT PLANTING TIME: When planting your Buddleja, it is best to dig a shallower hole than the depth of the pot. This way, the base of the plant is a bit higher than the ground. This encourages water to drain away from the plant instead of settling around it. This is especially true in clay soil. Most websites and information say to plant your Buddleja, other shrubs, and most plants in general,  no deeper than they were in their pots. This is OK if you have well-draining soil. Trees and shrubs have a “crown” and definitely should not be planted deeper than they are in their original pots.

4) DO NOT AMEND THE SOIL: Don’t add topsoil, potting soil, mulch or anything extra at planting time. Plant into your natural soil as making additions can cause draining problems. This is true for all shrubs. I found this information online and there is a lot of information that may disagree with this. Use your own judgment. The most important thing is  your plants develop an established root system

5) DO NOT MULCH: While many plants require mulching, especially in colder climates, the Buddleja does not. If you do, make sure you give plenty of clearance around the base of your Buddleja.

6) PRUNE IN THE SPRING NOT IN THE FALL: Even there are many websites that tell you to prune your Buddleja in the winter, but some experts recommend not to prune them back until new growth appears at the base of your plant in the spring. In cold climates, pruning in the winter can leave your plants more susceptible to damage. You have to be patient for them to come since Butterfly Bushes may be among the last to return.

7) DO NOT OVER WATER: Buddleja’s are more susceptible to having problems with to much water instead of not enough. This is especially true in clay soil. After the first year, I hardly ever watered my Butterfly Bush on the south side of the house.

Even though Buddleja’s are a beautiful plant, some species have been declared a noxious weed in some locations.

There are many websites that have some very useful information about the Buddleja. Here are a few that can help when choosing which Buddleja to grow…

I will continue to add more information as I find it… I was sure I found a list of Buddlejas grown at Kew Gardens, but when I went to get the link, I couldn’t find the page… I thought surely I saved it.

I hope you found this information helpful. If you have any comments, questions or suggestions, I would like to hear from you.