As of 12-27-21 when this page was last updated, Plants of the World Online by Kew lists 49 species in the Tagetes genus. It is a member of the plant family Asteraceae with 1,678 genera. Those numbers could change as updates are made n POWO. The number of genera in the family fluctuates quite often.

Marigolds, in my opinion, are one of the most versatile plants in gardens and flower beds. There are so many shapes, sizes, and colors. They are much more than just a smelly plant!

I typed in Tagetes on my browser and it came up with 3,790,000 results. Do you realize there are 49 accepted species in the Tagetes genus?

Marigolds on the east side of the garden in the backyard of the mansion in Leland, Mississippi on 10-24-11, #83-15. I believe these are Marigold ‘French Dwarf Double’.

Tagetes species are native to North and South America but many species have naturalized in other parts of the world.

Previously, French types were considered Tagetes patula but that species is now a synonym of Tagetes erecta. Many scientific names have changed over the past several years, and some of the changes have been surprising. Previously, the taller Marigolds were Tagetes erecta while the shorter, bushier types were Tagetes patula… I am not a botanist, so I just go with the flow…

Most Tagetes species grow well in any type of soil as long as it is well-drained.

The name Tagetes comes from the name Etruscan Tages meaning “born from the plowing of the earth”.

The name “marigold” is from “Mary’s Gold” which was a name originally given to a native European plant, Calendula officinalis. 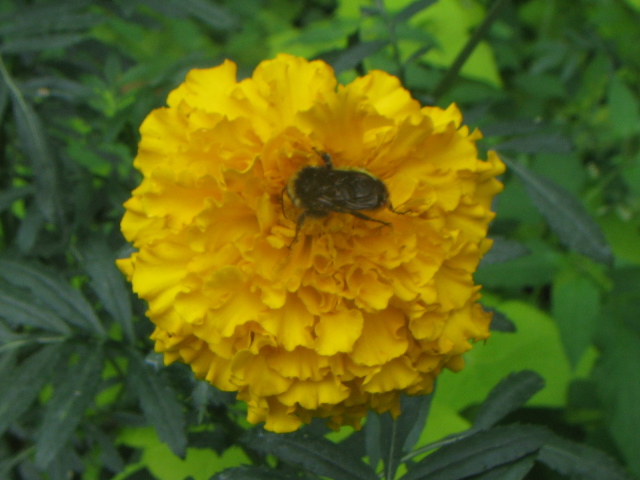 African Marigold is the name generally given to cultivars and hybrids of Tagetes erecta. Strange because this species is a Mexican native, not African.

French marigolds are usually cultivars and hybrids of Tagetes patula, many of which were developed in France, but the species is not native to France.

Signet Marigolds are hybrids made mostly from Tagetes tenuifolia.

Tagetes minuta, originally from South America, is the source of Tagetes oil called tagette or Marigold Oil and is used in perfume. It is also used as a flavor additive in the food and tobacco industry. Ummm…. I mentioned before it was considered a noxious and invasive weed in some parts of the world. This species is also used in South Africa for land reclamation. GEEZ! I have a comment but I will keep it to myself. It is used in many parts of South America as a culinary herb and the Incas called it huacatay. A paste from it is used in a potato dish called ocopa. It is also used as a medicinal tea…

Yes, Marigolds have a strange smell to some, but some varieties are bred to be scentless… I cannot imagine a Marigold without a smell! 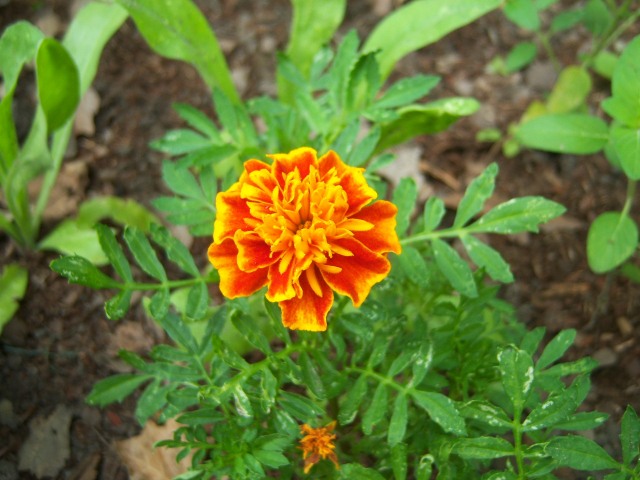 Marigolds are great companion plants because they deter some insects. They are great to plant with tomatoes, peppers, eggplant, tobacco, and potatoes for this reason. Some species are said to aid in the removal of nematodes. They are not good to plant with legumes, though, because their roots produce antibacterial thiophenes.

The flowers of Tagetes erecta are rich in orange yellow carotenoid lutein and are used in food coloring. It is used in Europe as coloring in pasta, vegetable oil, margarine, mayonnaise, salad dressing, baked goods, dairy products, ice cream and yogurt, juices, and mustard. The powders and extracts of Tagetes erecta are only approved as a colorant in poultry feed in the United States. 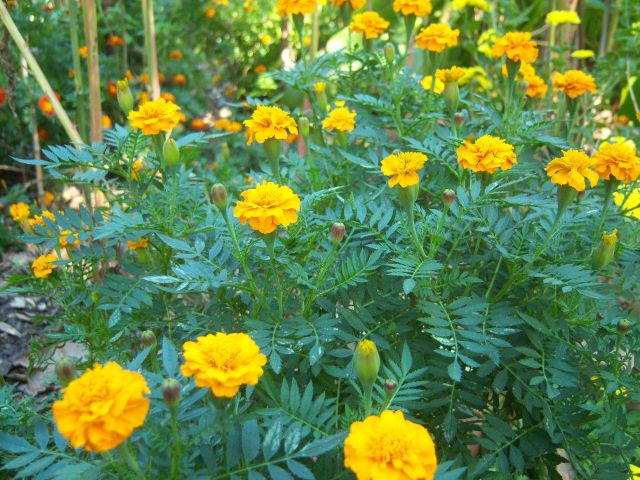 Tagetes lucida, pericón, is used to make a tea in Mexico with a sweet, anise flavor. It is also used as a tarragon substitute.

I could go on and on about how various species of Marigolds are used in religious rituals and wedding ceremonies in other parts of the world.

What is important is that you know how beneficial the Marigold really is. Not only as a plant that adds vibrant color to your flower beds but also in companion planting. It is also good to know their place in history and in society.

Since I moved back to the family farm in west-central Missouri in 2013, I have mainly been focusing on the Marigold ‘Brocade’. In the right conditions, plants can get fairly large and produce hundreds of flowers. I like the reddest flowers, so I selected seeds from them. I found it really doesn’t matter because after years some of the flowers are still orange…

Marigold seed is easy to plant either right in the flower bed, in packs, pots, etc. You can thin them out or transplant the seedlings and put them where you want them. Just make sure you space them out appropriately according to their mature size. Instructions on the packet should give you directions for the variety.